After having lost 25 lbs since the start of the year, I've often felt that I needed to amp up my exercise.  Sure I get lots of ambling around here, get the occasional bit of a work out chopping wood or pushing wheelbarrows of compost to spread on the garden, but I felt like I should be doing more.  The dog walks these days are at a slower pace to fit Calli's speed.  I had thought that I should get up early and take the two collies for a brisk walk first thing in the morning, but I can't seem to drag myself out of bed in time.  I am hoping to train for the 10km Sun Run again this year.  It takes place in April, and training starts in January, and I'd like to get some sort of a work out before that.

Meredith has been going to various exercise classes on and off, and now is going twice a week to a Total BS class.  She had a coupon for a free class so I took her up on it Monday night.  The instructor is one of those effervescent types, and she talked on about a new form of exercising that she is really interested in bringing to her class.  So we got a taste of it on Monday night.  Sets of strengthening exercises done at an increasingly intense pace with a recovery period in between.  Some of them weren't bad, some were exhausting and I couldn't complete the sets, and I could feel muscles being worked that had never been worked like that in a long while.  At the end we did quite a bit of stretching.  I went home and did more stretching, and glugged down water.  I could feel muscles tightening up a bit, and was dreading what the next day might bring.  I was feeling particularly smug on Tuesday morning because I felt pretty darn good.  The quadriceps that were aching the night before, didn't feel as bad.  Going up and down stairs was okay.  Since I wouldn't be sitting around all day I thought I would be okay.  And I was, for the first while.

About noon we headed out for a few groceries.  First to the butcher shop, then the green grocer, then the grocery store, and then another grocery store.  I noticed that I was feeling pretty stiff every time I got out of the car. Larry left me at the last store and continued on to the Co-op to get chicken feed.  He seemed to be taking a while to get back, and then I remembered I turned the volume off on my phone the night before.  I checked, and sure enough there was a text from him 17 minutes earlier.  Larry had locked his keys in the car, did I have mine.  Fortunately I did, and I texted him back and asked if he was still there.  He said he was walking my way, was nearly half way.  The Co-op was 2 1/4 miles away.  Actually only two miles, but Larry had not thought of taking the angle road that cut off a bit of the distance.  I said to wait and I would start running.  Optimistic or what?  First off my footwear wasn't suited for running, but I tried.  My legs were so stiff at that point that it was a chore to walk at a decent pace.  I set off down the side of the busy highway.  When the legs loosened up a bit I managed to get a few seconds of jogging in, no more. A cold northeastern wind was blowing, thank goodness I had a hood on my jacket, and I was walking with the wind.  By the time we met up I had gone about 3/4 of a mile and Larry a mile and a half.  He turned around and we walked the mile and a quarter back to the Co-op.  My legs didn't loosen off any more.  When we got home I could barely get out of the car.  The dogs didn't get an afternoon walk, we were done.  I seemed to get even stiffer as the evening went on.

I thought I would take a bath.  I'm not a bath person, I can't remember the last time I had a bath. I pictured myself laid back in a hot bath reading a book.  I used to do that a lot as a teenager.  So I have one arm full of a big towel and book and robe etc.  With the other arm I'm reaching up to the top shelf of the cupboard next to the sink in the utility room where I think there is some Epsom Salts.  There is, and by the look of the bag, probably the last time the salts were being used was out in the barn to soak a horse's foot or leg.  As I am dragging the bag off the top shelf I managed to drag a plastic container that is now teetering on the edge, threatening to drop into the egg bucket below.  My hands are full and with the back of my hand I manage to push the container a bit to the right so that it drops into the sink and not the egg bucket.  But darn it all, if it doesn't go and bounce from the left sink into the right sink, where the cleaned eggs are on a rack.  I guess I can be thankful that only one egg broke.

I get all my stuff into the bathroom and realize there is no plug for the bathtub.  I'm not the only one that never has a bath, showers all the way at this house!  Back to the utility room I go, and look in the junk drawer.  Found a plug for the sink, but that is too small for the tub.  I start looking looking for something that will at least slow down the exit of the water down the drain.  I see a nipple from a baby bottle, leftover from our bottle feeding lamb days.  And guess what, it is just the right size and does the job perfectly.  I get the hot water going and start filling the tub.  I dump some lumpy Epsom Salts in from the grubby looking bag.  I get in the bath slowly and carefully, guarding my sore quadriceps.  I position myself with my legs fully submerged.  And then I start to get too hot.  The ceiling exhaust fan is going.  I lay still and try to ignore the panicky feeling coming on.  I finally have to do something, so open the window over the tub into which the arctic air coming from the east blows in, suck in some cold refreshing breaths, and submerge my legs again.  I think about the book, but I know I'm not going to be able to stay still long enough to read.  I get that panicky feeling again and finally just give up and get out of the bath. What a waste of a lot of hot water.  I'm reminded again why I much prefer showers to baths.  I'm a little looser when I head up the stairs.

This morning I felt better than last night, but didn't improve any more during the day.
Meredith said her hamstrings were sore.  The second class of the week got moved to Wednesday this week, usually it is on Thursday.  To bad, as it was not long enough for us to recover.  I was planning on going again this week, but tonight is too soon.  Meredith isn't going either.  She actually saw the instructor today and told her she probably wouldn't make it tonight.  The instructor said she was sore too.....Well that just made me laugh!
I feel don't feel so bad now.

Mt. Cheam from the freeway on our last trip to Oliver 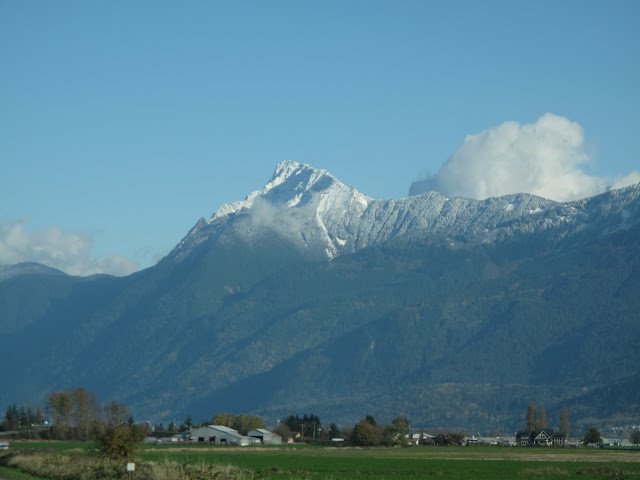