One of the stores where I buy my canning jars decided to put them on sale to clear out their stock at the end of the season.  Not that canning has a season for me, but it definitely does in some stores. The only problem was that they decided to put a limit of 6 boxes of everything at the sale price.  So every time I went in there I loaded up the cart with 6 of each size of jar, 500ml, 250ml, and 125ml and some were of two different brands, so I was able to get 12 of some sizes.  They were either Bernardin or Golden Harvest.  As well they had the pectin on sale, both the no-name and Certo, and also lids for the standard jars as well as boxes of lids and rings for the widemouth and standard jars.  Some days I took a load out to the car, and then went back in and went through the checkout again.  Sometimes Larry was with me, so we each got a cart.  By the time the jars were all sold we had about 150 cases of jars, and loads of lids and pectin.  The jars will probably take me 1/3 to 1/2 way through next year.  I do get a lot of jars back from customers, I give them 25 cents off their  next jar of jam for each jar they bring back.  The jars were nearly half price, and the boxes of lids and rings were a relative steal, at $1.14 for the standard ones, and $1.74 for the widemouth.  The regular price for those wide mouth boxes of lids and rings was $6.99.  Good grief.  The boxes were all stacked in the family room for quite a while, but one evening while I was making jam, Larry set about and cleaned out the closet under the stairs and now they are all stacked neatly in there. 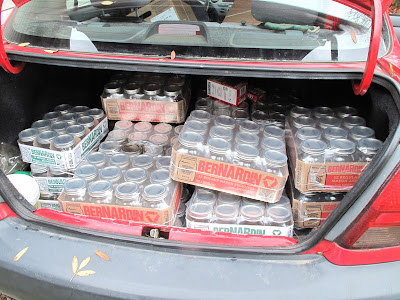 On this particular day we had another load in the back seat of the mini farm truck car.  The people that I had bought the squash from had a tough time selling them all.  At one point they lowered the price to 10 cents a pound!  I dropped some boxes off for them one day, and they gave me some free squash, ones that were blemished on the outside.  They talked about donating them to the food bank and the Salvation Army kitchen and chucking them down the ravine.  I said that before they chucked them down the ravine, to give me a call as I would be quite happy to come and pick them up and bring them back for the chickens.  Just before Halloween they had managed to sell most of their squash, but they had two wheelbarrows full of spaghetti squash for the chickens if I wanted to come and get them.  We got them that afternoon, and since we were half way to town we continued on and got that load of canning supplies in the picture above. 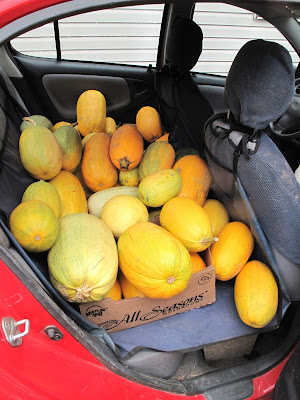 Some of those squash were massive
The hens are more than grateful.  Here they are early on a frosty morning, digging right in. 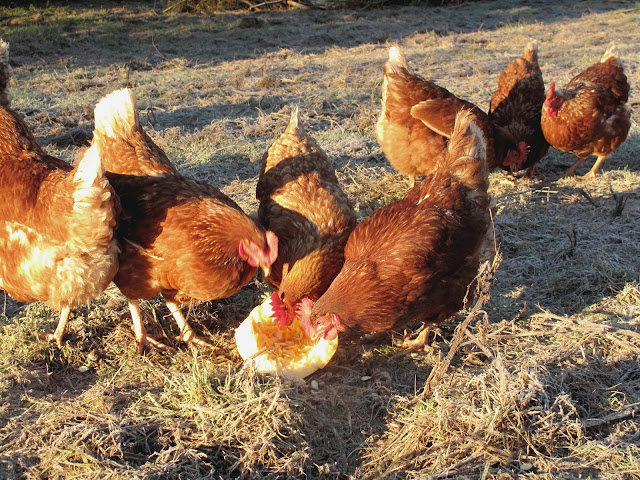 If I remember they get one a day, and for the most part the whole thing, skin and all, is gone by nighfall. 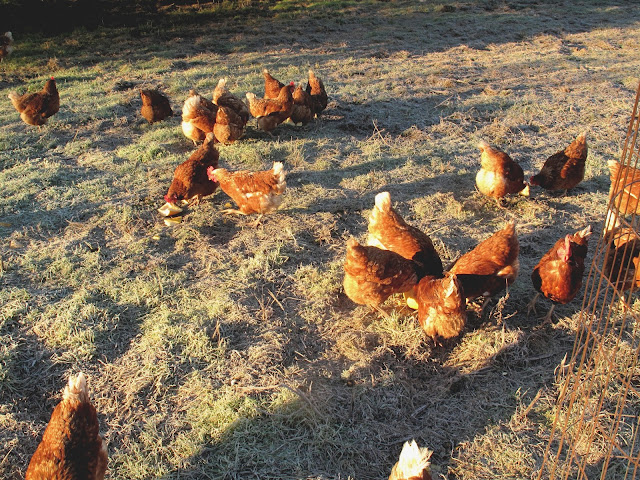 We have some more cool nights coming after today's rain.  I'm wondering how cold it can get before it is too cold for the cabbages.  It's hit -3 or 4 Celsius so far, and they seem to be fine, especially the red cabbages.  The forecast was for it to go down to -10 at night later this week, but now that's been adjusted to -5.  I should probably cut the biggest cabbages at least, as it would be maddening to have them all freeze and then turn into mush.  There are still carrots and beets out there.  I could mulch them well and they would be okay, but that just gives the voles a nice cosy spot to munch on them, protected from the elements, so that might not be an option. 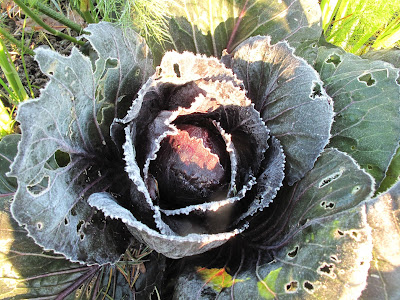 In the meantime there are still dahlias that need digging up.  Tomorrow looks like a good day to hopefully get most of that done.