Back from Oliver Again

Saturday night we got back from a short visit to Oliver.  The weather and scenery were beautiful as we headed to Osoyoos from Keremeos, on our way there.  Lots of irrigating going on.  The Similkameen River runs parallel to the road, between it and that mountain range. 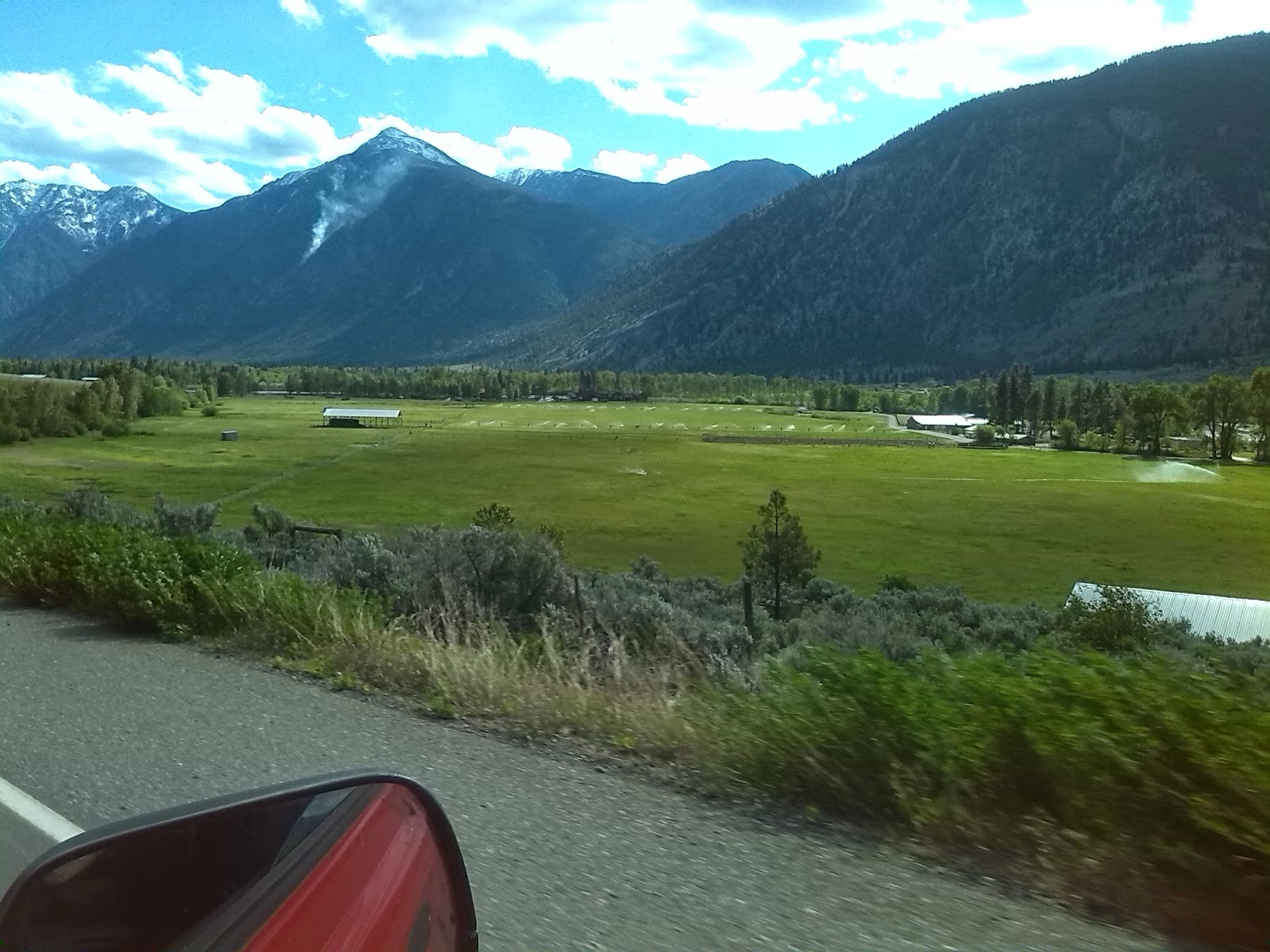 It was a windy day too, you can see it blowing the water.
That was a small fire burning on the mountainside.  It has been pretty dry through that area, and maybe even more so at Oliver. 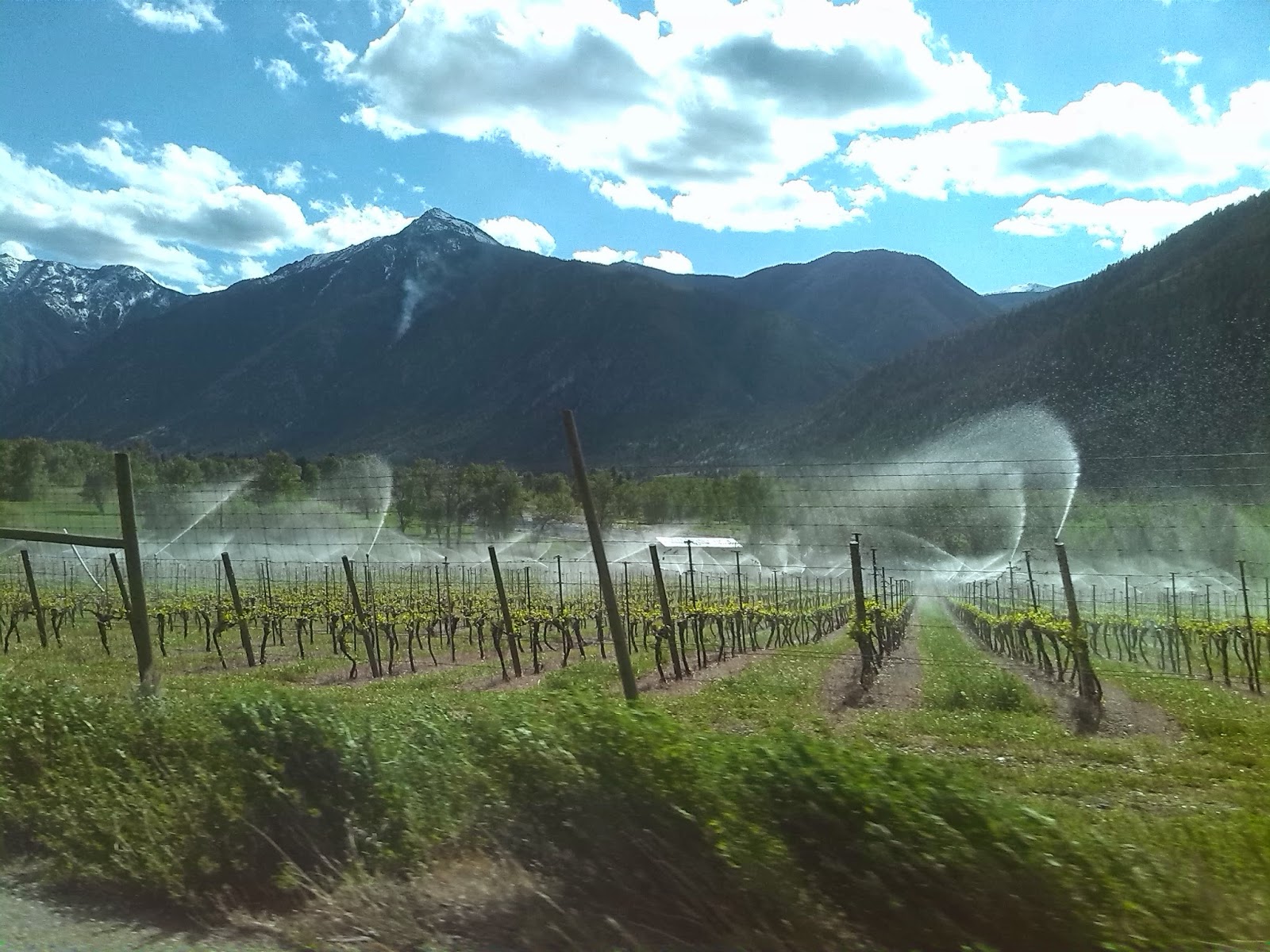 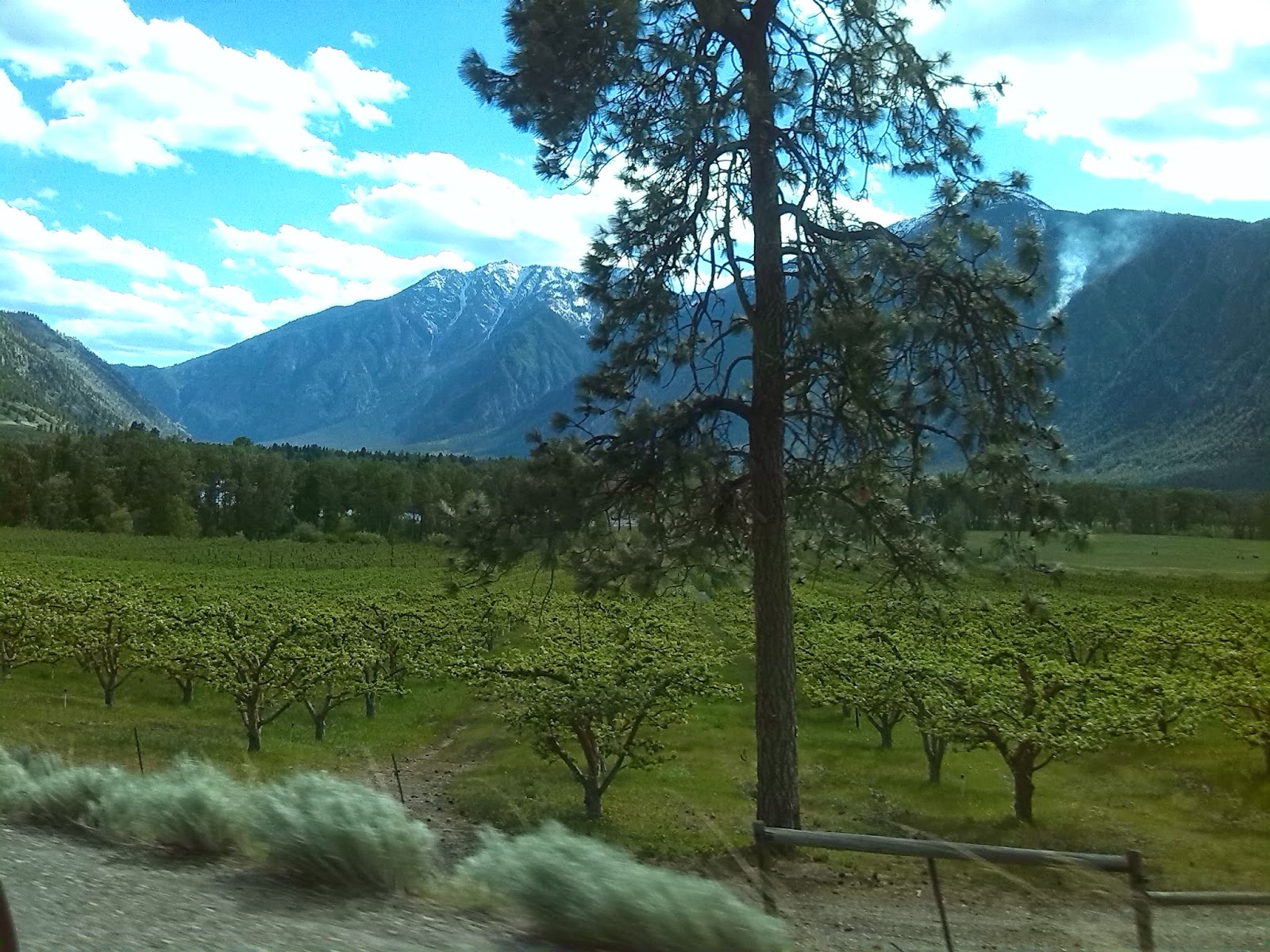 It was pretty at our place.  The wallflowers were in full bloom, and the scent of them is just lovely.  We also had the scent of lilacs from the hedge on the property to the east of us.

Luna has put her ball into the vegetable garden.  She's pretty good, she knows she is not supposed to go in there, and will usually wait for one of us to come and fish it out.  Not that there was anything planted in it at that point.  We had rototilled it at the beginning of March.  Last week I pulled about ten weeds out, that's it!  If I left a plot here for nearly two months, it would be just covered in weeds.  But then you need water even for weeds to grow, and Oliver is lacking in that so far this year. 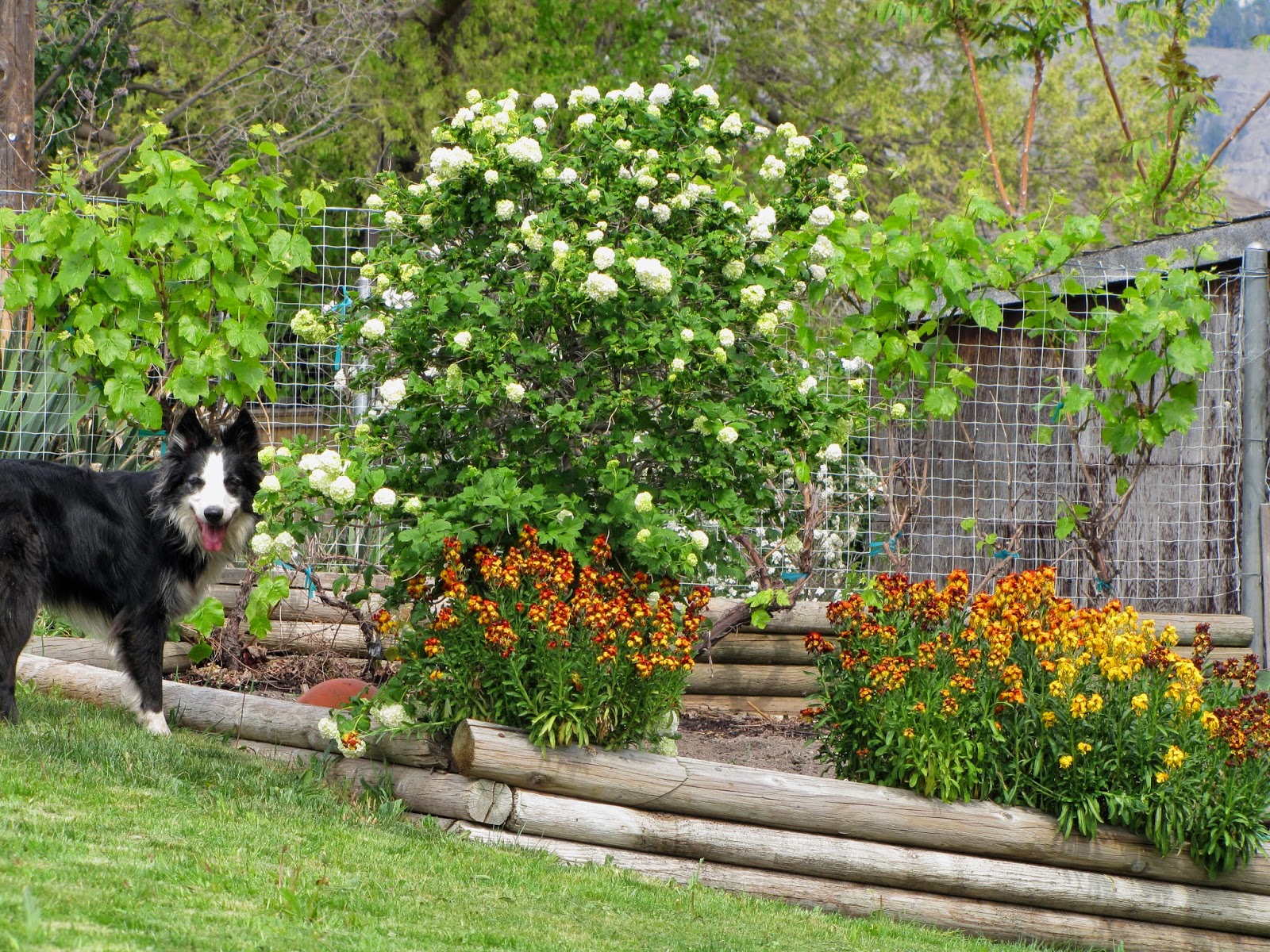 Okay then, don't get my ball...NOW.  I'll just roll and get myself covered in dry grass, which I'll then take into the house.  See how you like that then! 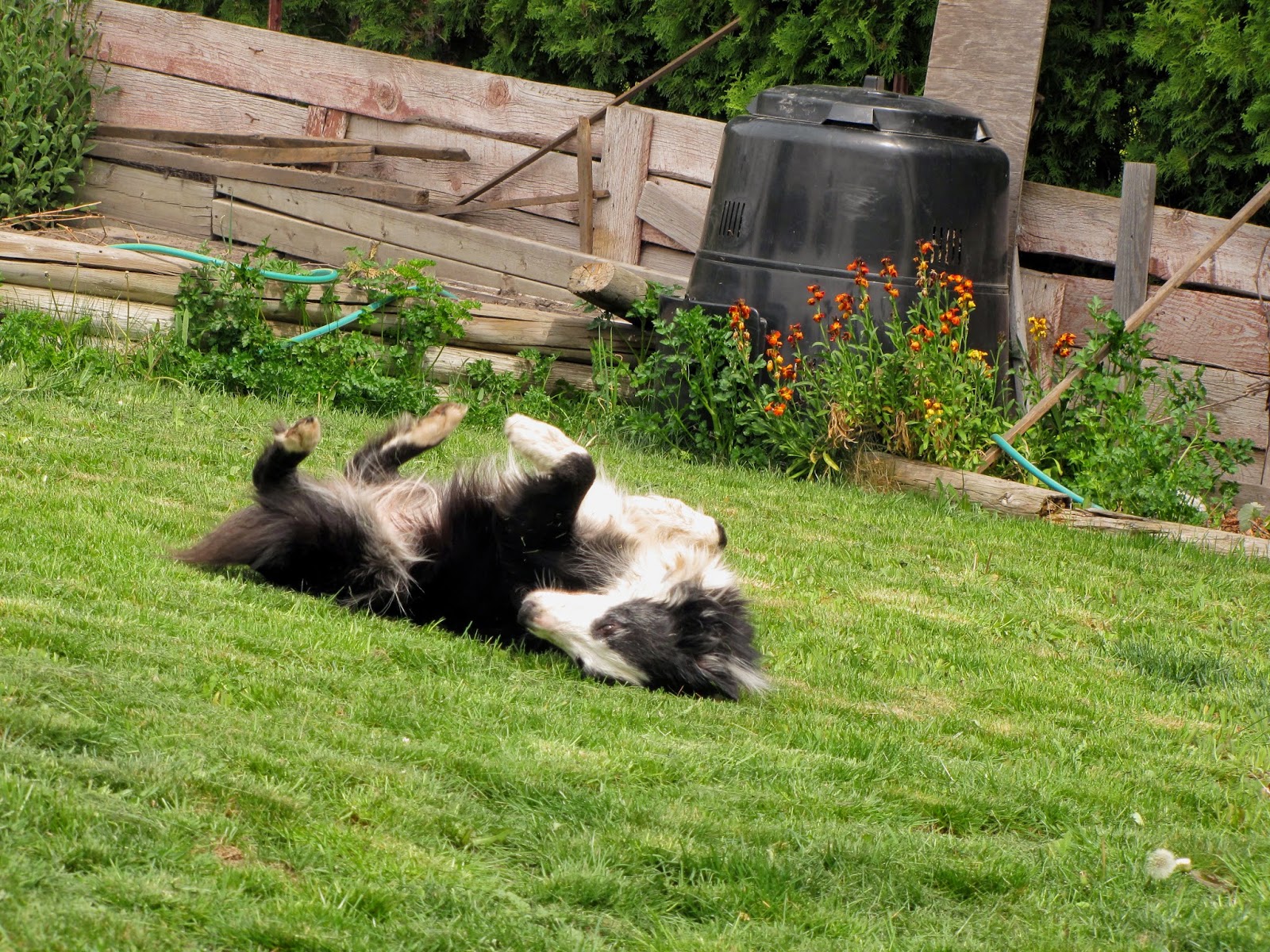 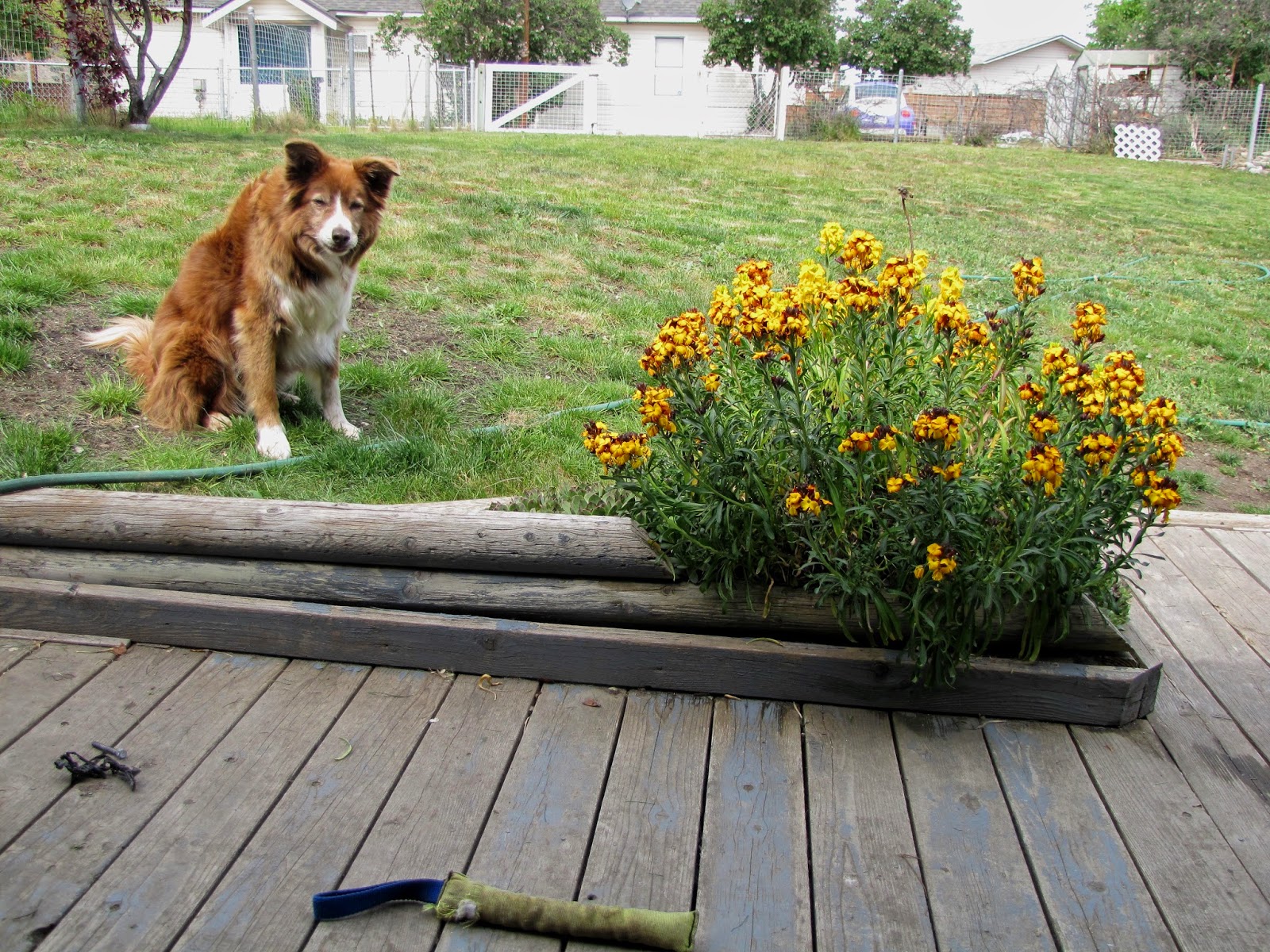 And when you tell him 'That'll do!' he moves right in to get a foot rub, as in my foot rubs him. 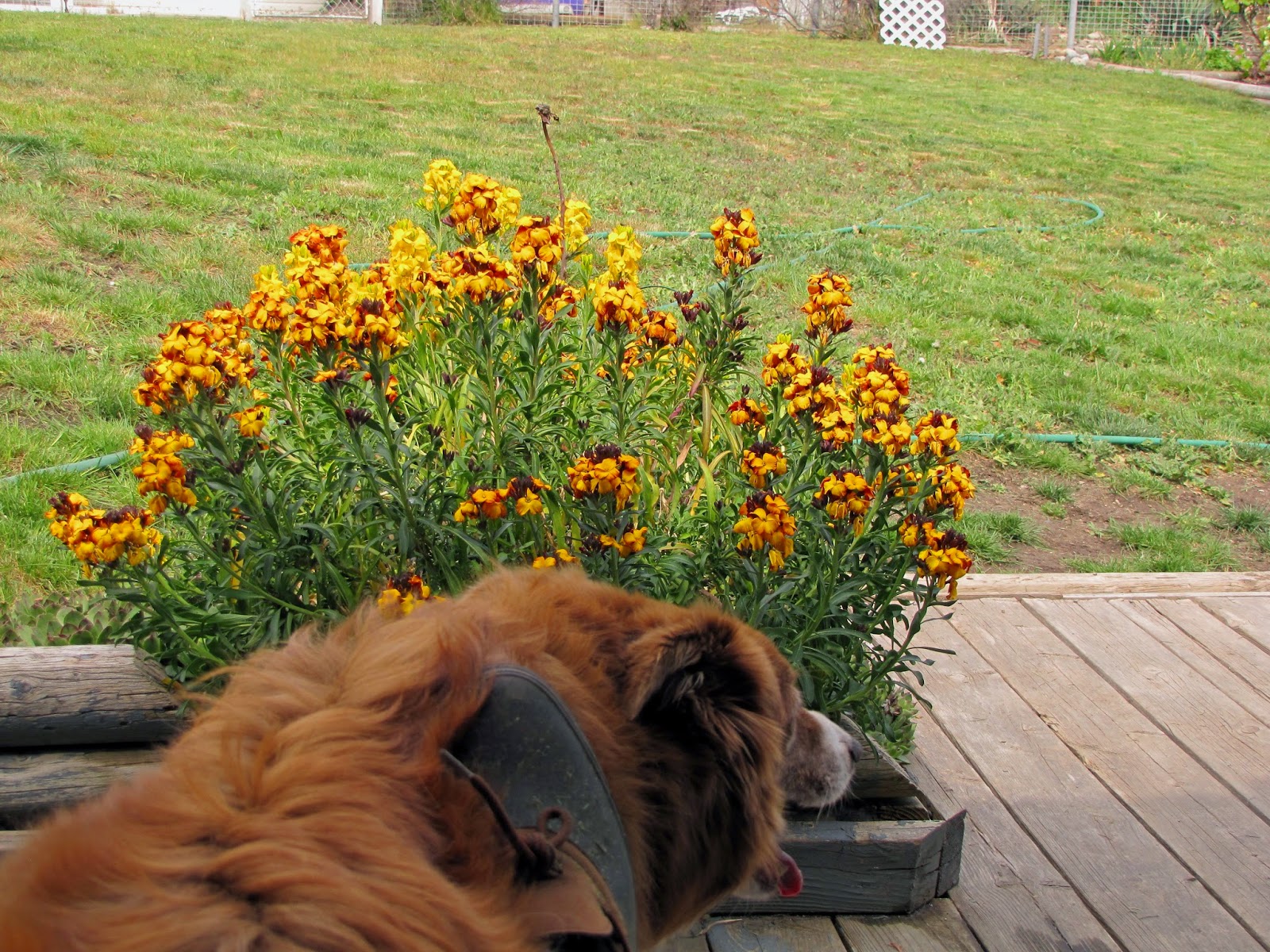 We got a bit of a wake up call this time, as to what it is like to live with neighbours really close.  We are lucky, as there is a big hedge between us and the neighbour on the other side.  There is a back lane behind us, and the house of the other side of it mostly has the blinds closed, and their back yard is not wide open to us.  Until this Spring there has been no one living on the other side.  Then we finally met the lady that has moved in.  She's a dog lover, shares one (a dog) with her ex, and is more than willing to lean over the fence and throw something for Jake.  That was fine.
But now the weather is warmer, and she has acquired a significant other.  The first morning we were there, it was nice and sunny.  I was just about to let the dogs out the back door for their early morning constitutional, and look through the window and see that there is some foot massaging going on just on the other side of the fence.  It was just too....odd.  I knew Luna would bark, and I would be taking Calli out onto the lawn, holding her up by the tail, to manually express her bladder, and it was just too weird seeming with them so close.  So we all went out the front door instead.    The next morning it was fine as it wasn't so warm, the chairs were empty.  During the day I put up this temporary privacy screen.  I was glad I did as that evening they had company and they were sat out there again.  I don't want to be on display every time I come out of the door.  Of course they are used to no one actually being at our place, so I'm sure they feel we are invading their privacy.  I know they will be sitting in that spot quite a bit in the summer, if they are still living there, as that will be the only shaded spot.  I'm going to try come up with something temporary that we can use when we are there, that is a bit wider than a sheet hanging on the clothesline.  I had to clothespeg it to the chair to get it to mostly stay in place. 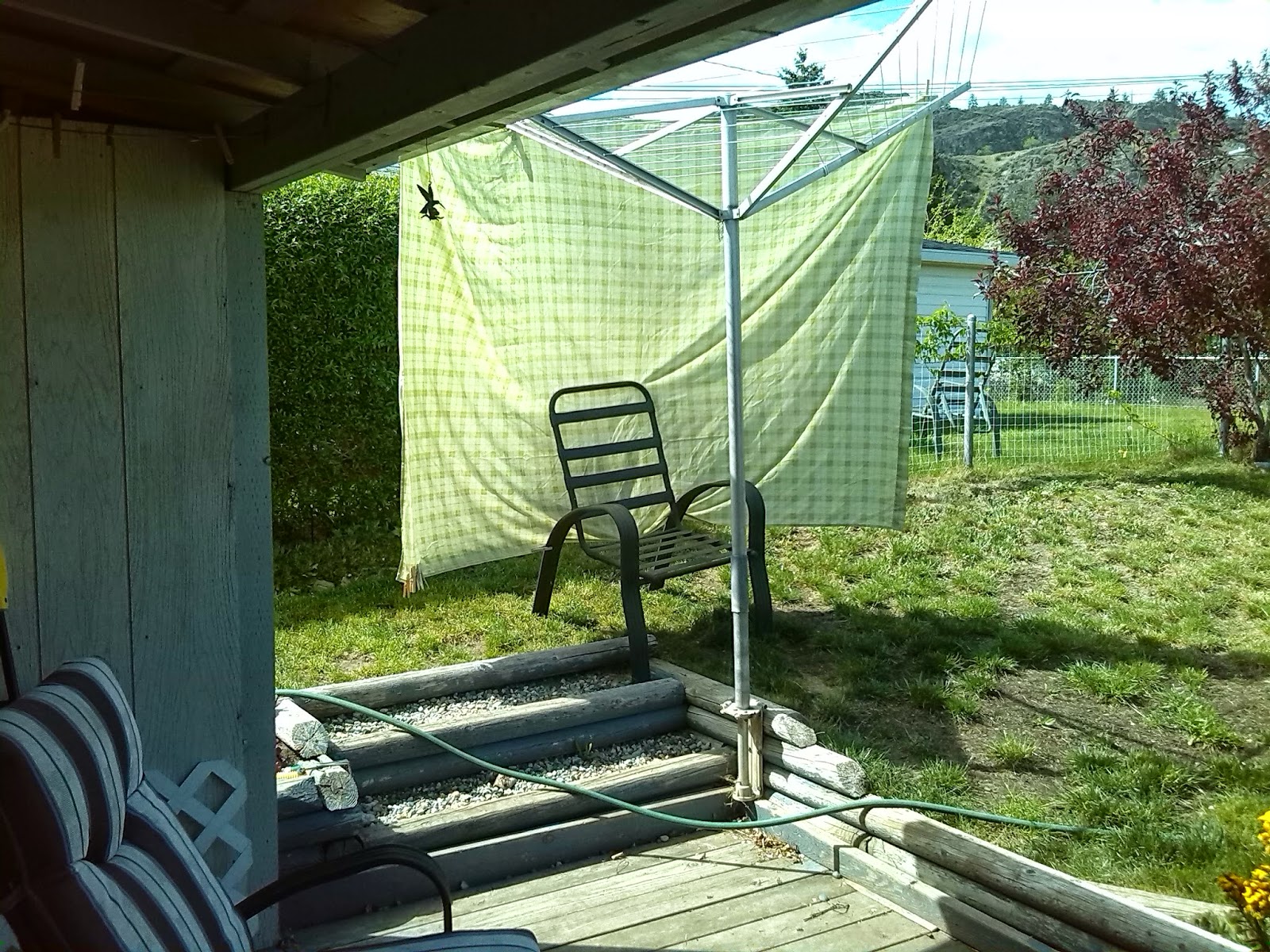 We ate well.  Did you know you can make daisy pancakes out of just egg and banana? 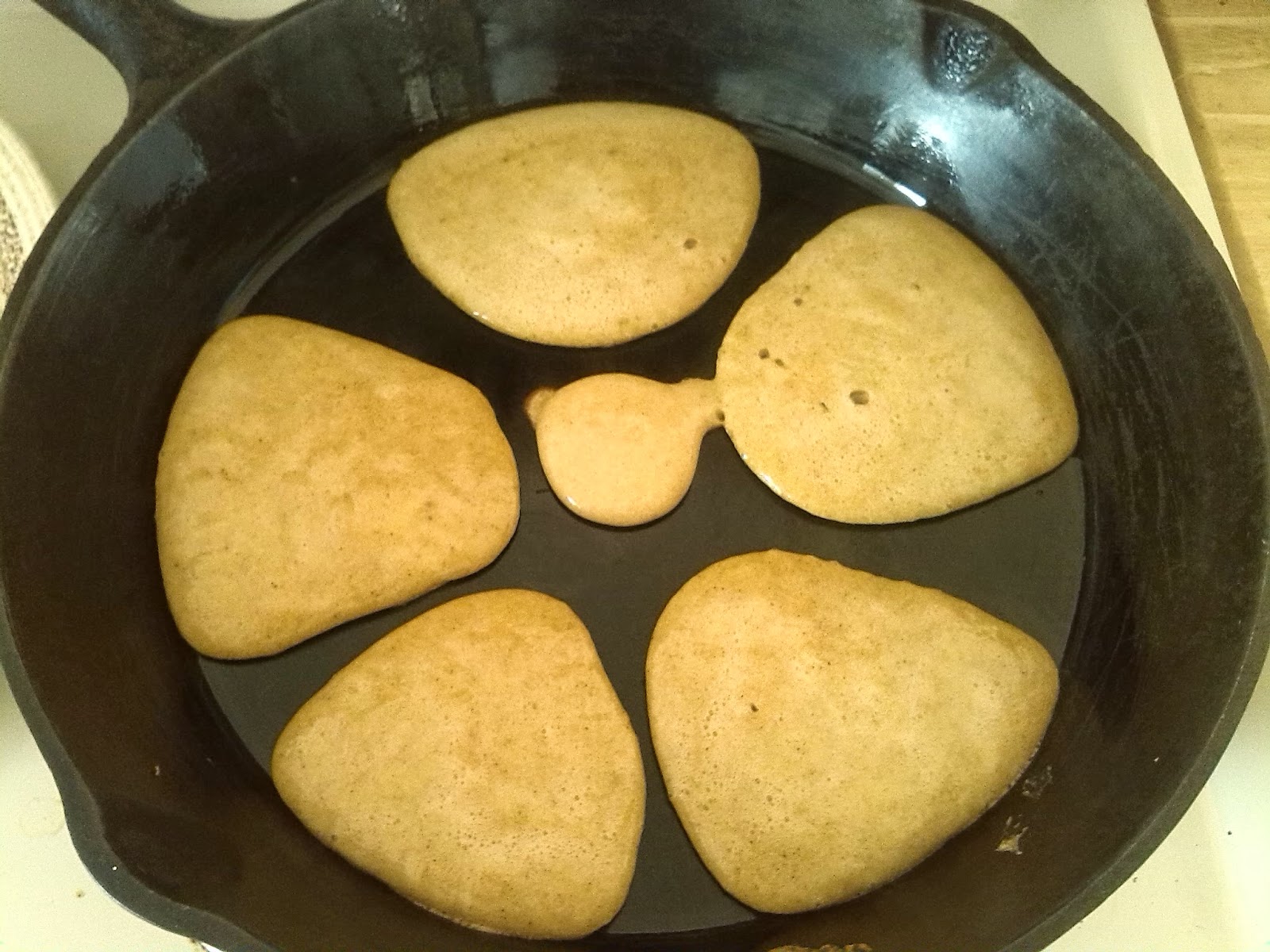 And if you find a really good deal on chocolate bars (yes, we treat ourselves with the occasional little bit of dark chocolate) it's wise to stock up.  And then reconsider and go back and buy another ten bars! 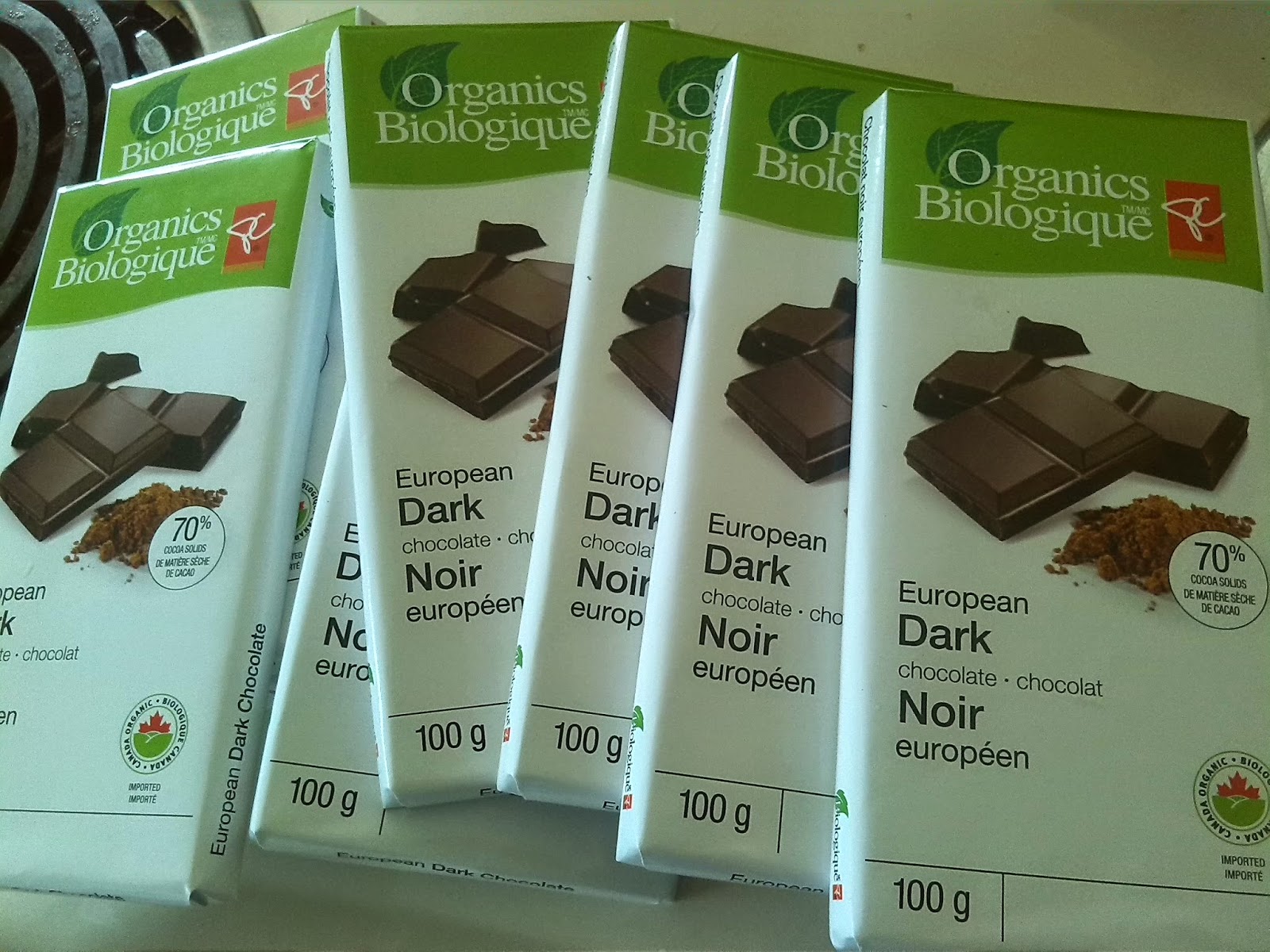 I said I wanted to go on a decent bike ride while we were there.  It was sort of a cloudy day, not too warm, although Larry had just stripped off his jacket in this photo.
See that piece of mountain between his helmet and the telephone pole.  That has the radio tower on top, and we live to the east of that.  Just to give you some idea of how far we had ridden at this point, and we weren't halfway yet. 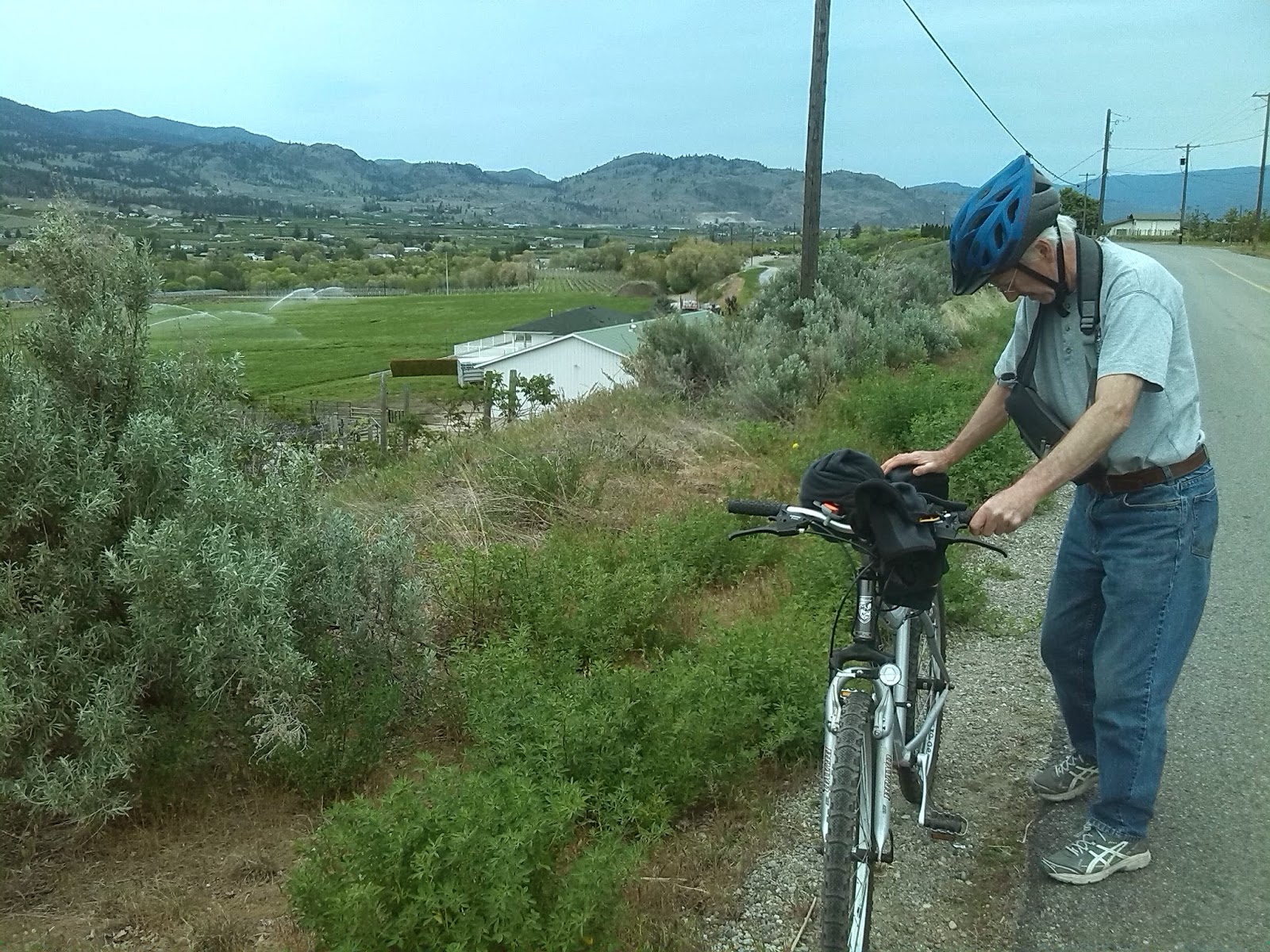 We forgot the water bottle, and then joked that we could always go to a winery for some liquid refreshment.  There were another nine wineries listed on the other side of that signpost.
I think the look on Larry's face is a reflection of how his backside feels.  We both had a bad case of numb bum.  He had the padded seat cover, and I had the padded shorts, but that only helped for a little while.
More training in the saddle is what we need.  We rode about 20 km. 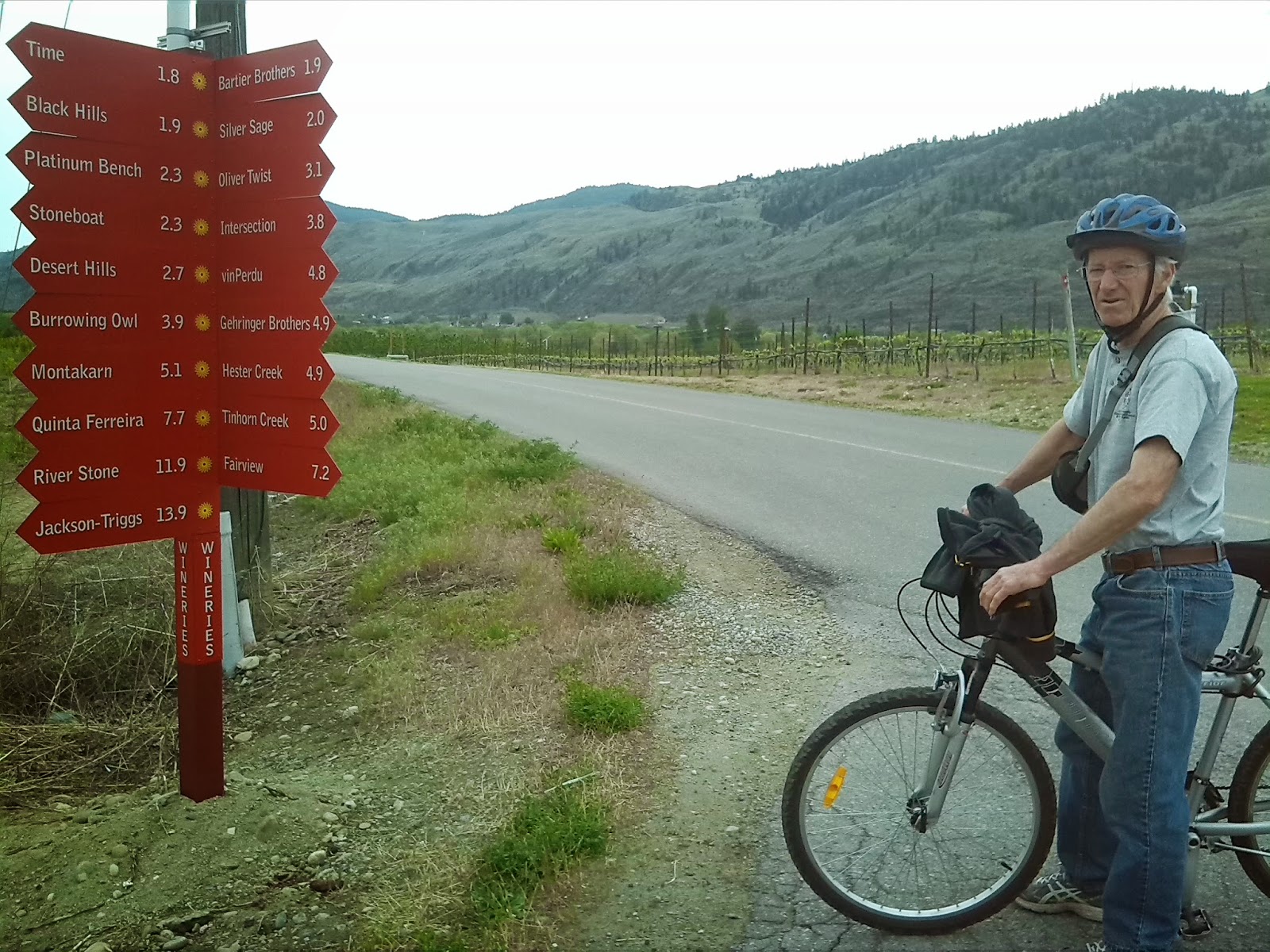 We did some walks too.  Calli at 15 years, 3 months, one week plus, is still chugging along. ( I figure after a dog turns 15, you can get really specific as to how old they are)  This was a 65 minute walk. 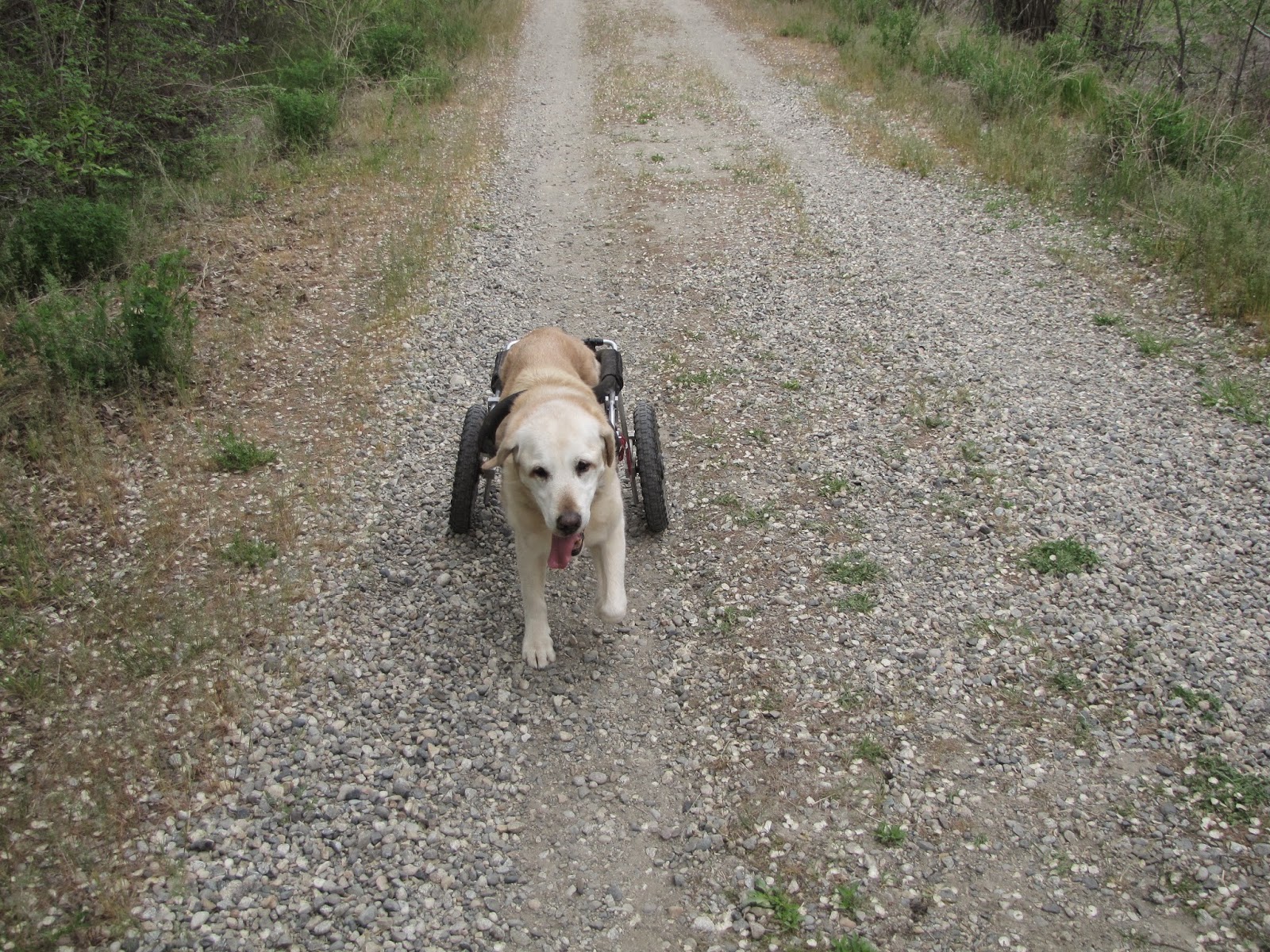 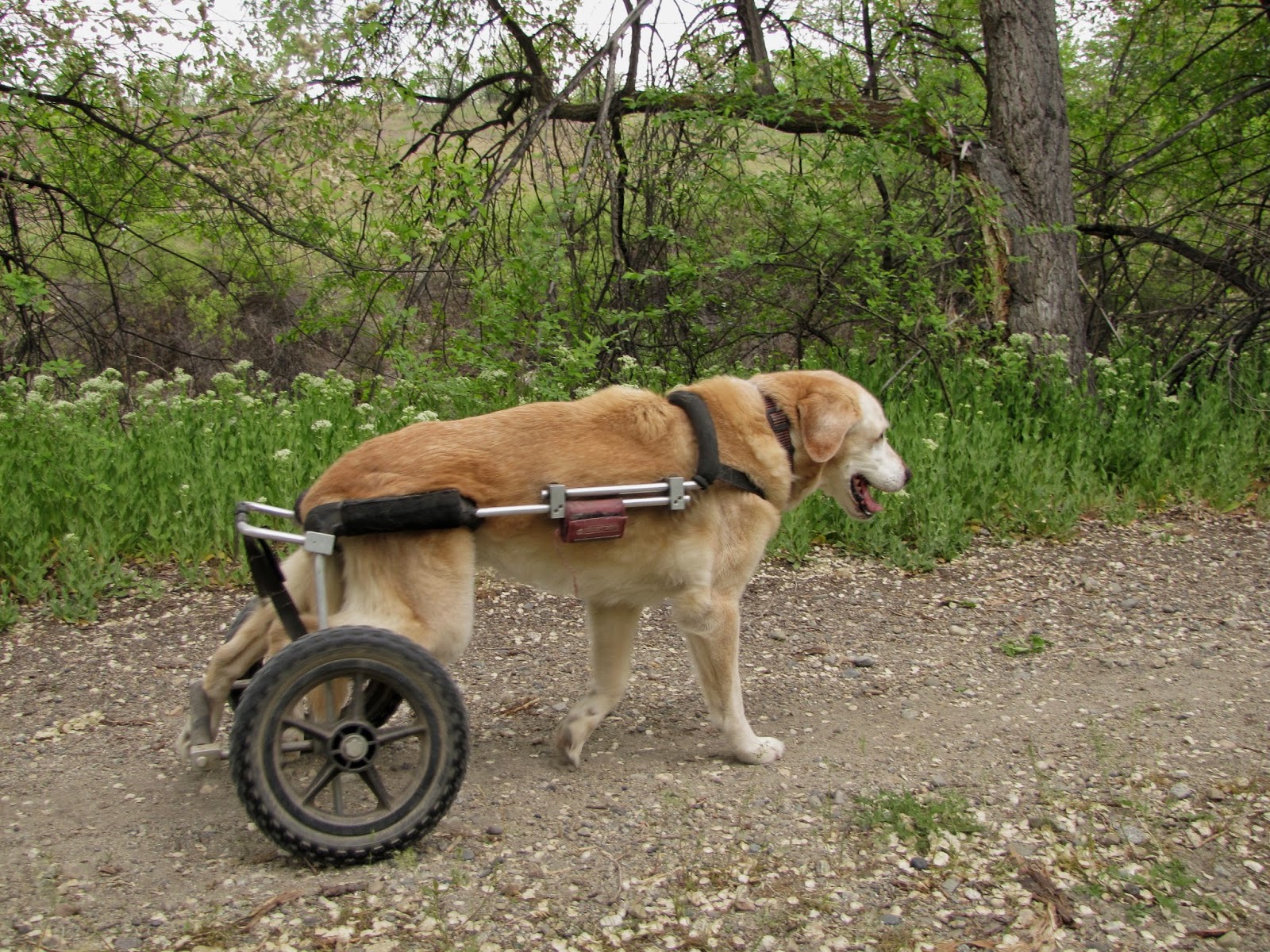 I did plant a few squash while we were there.  Two each in two spots along the fence line, where I'm hoping they can catch a bit of moisture from the automatic irrigation next door.  A few more, as well as a few pepper plants, in the actual vegetable garden.  Fingers crossed for a decent rainfall or two or three in the next few weeks.  We mowed the lawn and then watered it well before we left.  Calling the back a lawn is a bit of a stretch, but what is there is better than just plain dirt.  We've realized that we can't fix the lawn until someone is there full time.

And to finish off this rambling post, a shot of a cute corner of the garden. 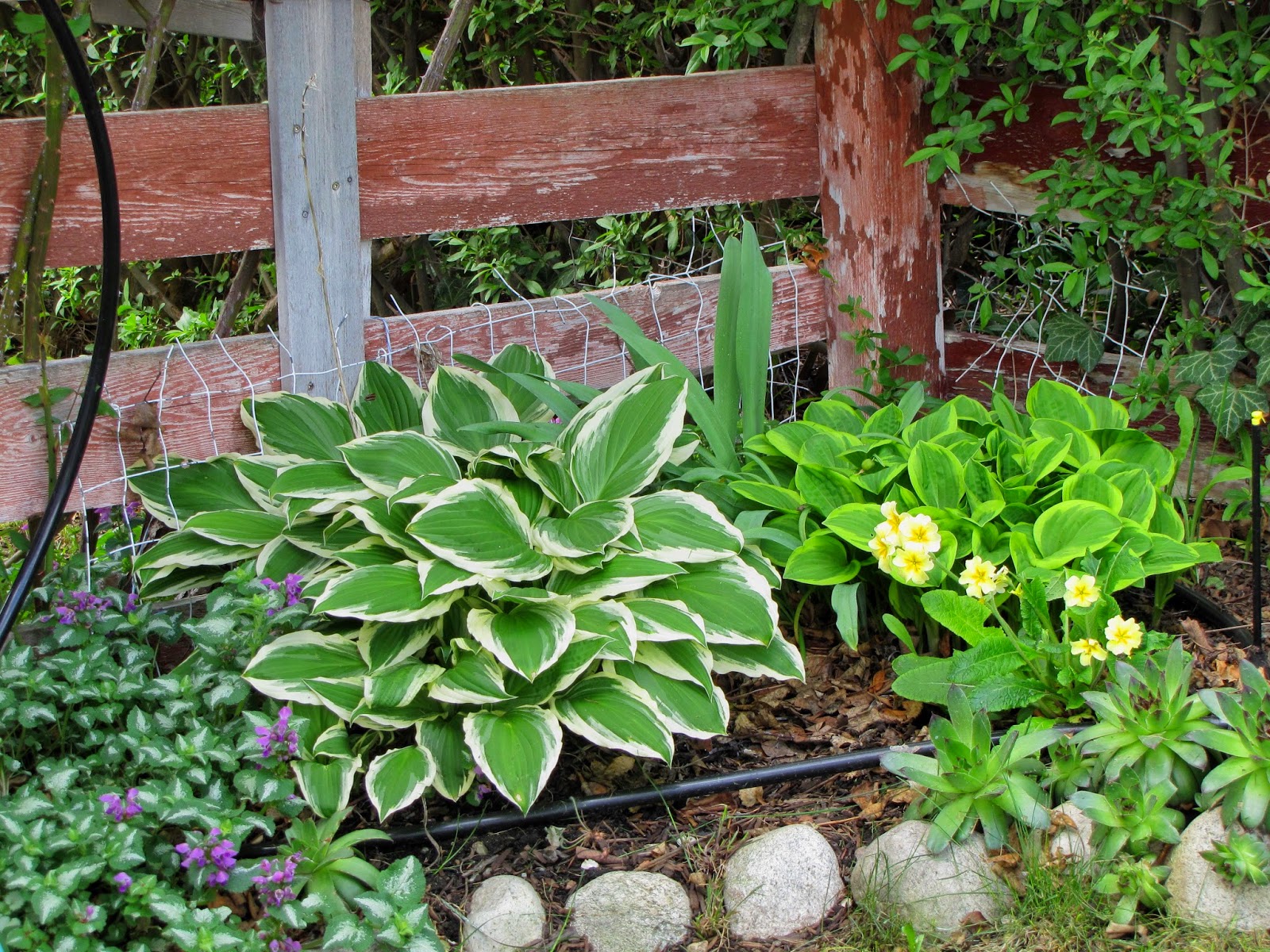