I'm getting behind again.  I took the pictures for this post last week, so the plants look a bit bigger now.
Thought I'd give you a bit of a tour of the vegetable garden down by the house.  The garden is not very organized.  Little bits of stuff planted here and there in some parts.  Still patches of last years kale and collards that I am still picking little new leaves off, although their days are numbered.  This garden is on a slight south facing slope.  In the bottom southeast corner there's a little patch of  red cabbage.  At the top of the picture you can just see a bit of last years kale.  That will be chopped off shortly, and I've already inter planted some fennel amongst the kale plants. 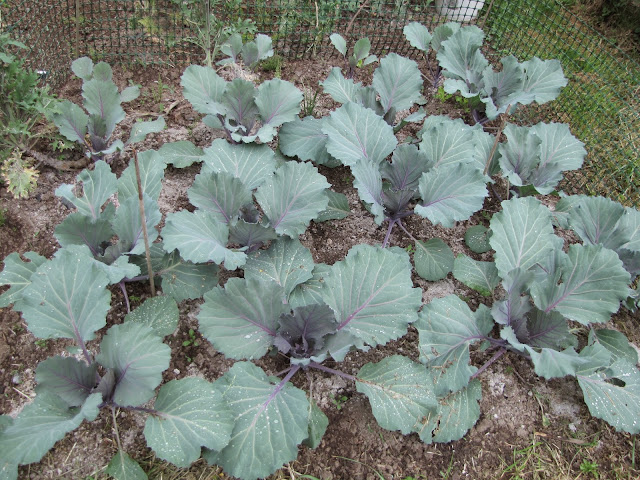 Just to the east of that is a patch of chard.  The older seedlings are doing well, and to the right of it there are a few rows of newer seedlings. 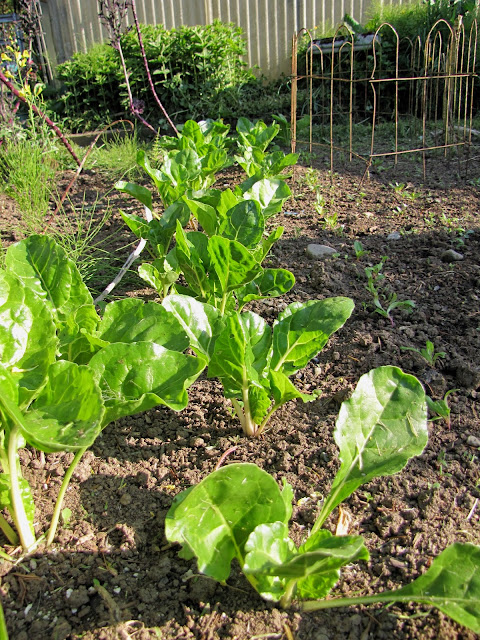 Heading further west is more of last year's kale, with my fuel stand bean support in position, but not set up and ready to go yet. 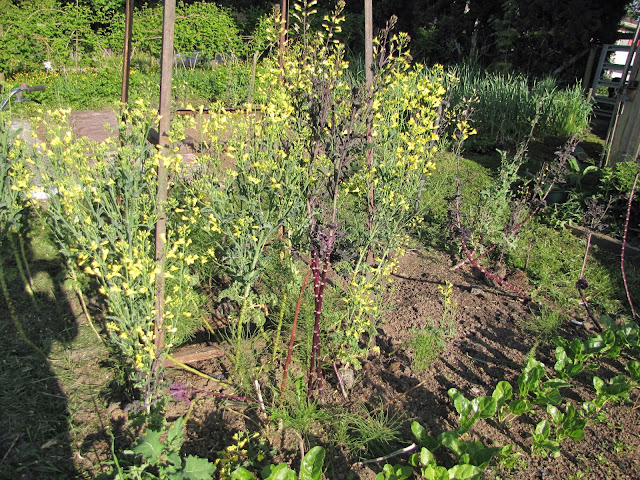 On the other side of the path is a pretty decent patch of arugula, with garlic behind.  I can see a slug on the arugula.  I wonder if anyone found a slug in their bag of arugula at the market on Saturday:( 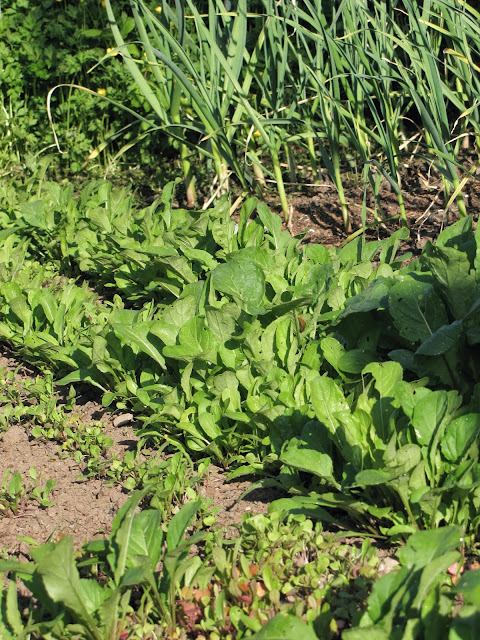 Below the arugula is a patch of lettuce, then some beet seedlings under the cloth, and some more fennel under the screen.  While we were away I wanted to give the seeds that I had just planted some protection from birds, chickens, cats, whatever might get in there while I wasn't around to protect it. 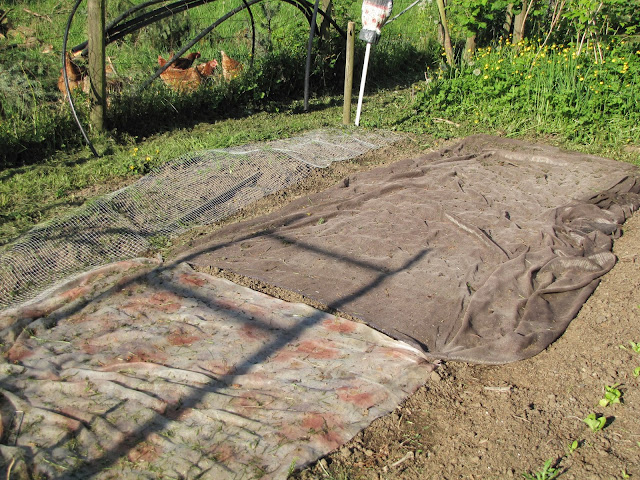 Here's a look from the top. Garlic, then arugula, a bit of old kale interspersed with fennel, lettuce, beets and more fennel. 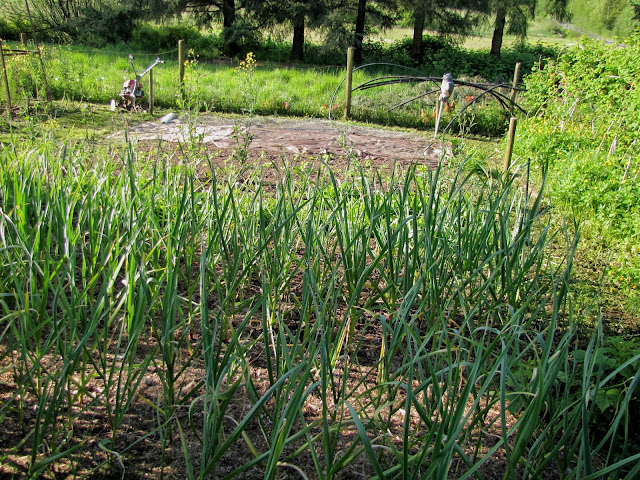 To the right are a couple of rows of raspberries and lots of buttercups.  I gave up on trying to keep the base of the raspberries cleared out.
After the raspberries there are basil seedlings under the plastic tunnel, a bed of cauliflower, then broccoli and  then cabbage at the bottom.   A row of snap peas runs along the left. 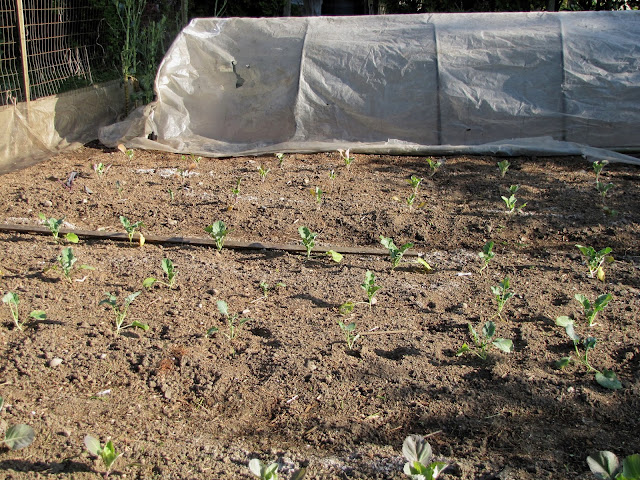 On the other side of the peas (on the right edge of the photo) is a bed of spinach and one of turnip greens.  At the back is more kale and flowering brussel sprouts that didn't come to much of anything last year.  The chickens will get all the old plants when I finally pull them out.  Meanwhile the bees are working hard to pollinate those flowers.  I'll leave a plant or two to set seed. 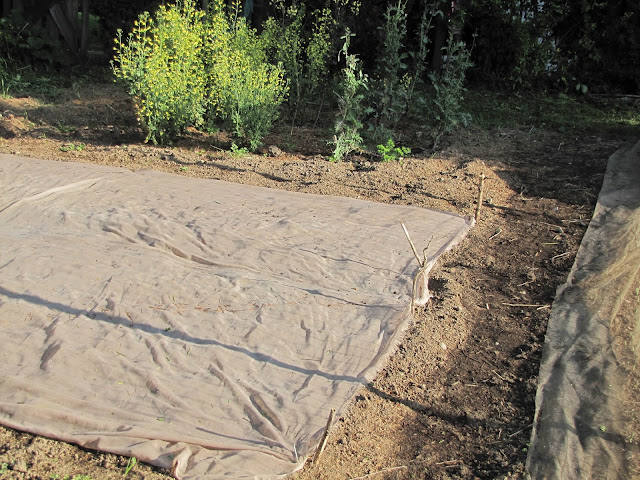 I haven't grown turnip greens before.  Can anyone tell me what they are like?
Here's a peek under the cloth. 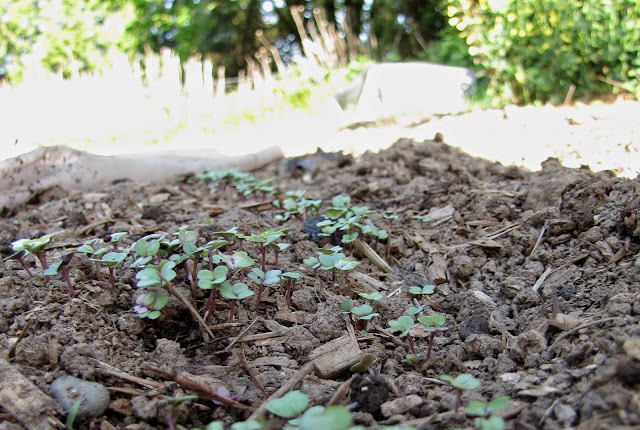 Above the basil tent is a bed of kale, about 60 plants I think. 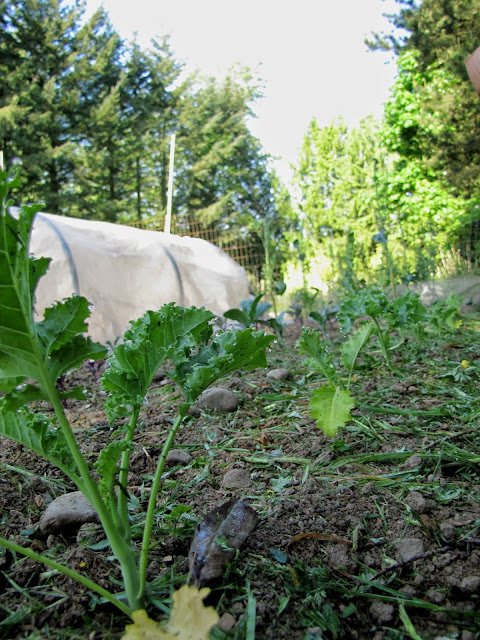 In the green house are tomatoes. Some already planted in the ground, and some in pots either to sell or plant outside somewhere. 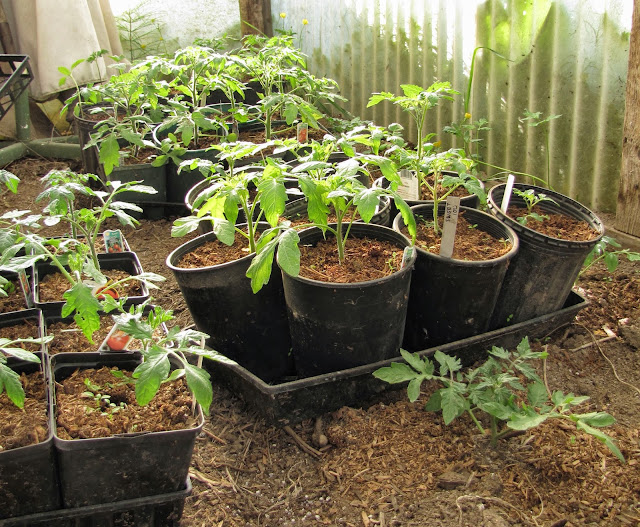 There is one piece of bench still set up in there.  On there I have sunflower seedlings and a variety of squashes.  I seeded them all just before our last trip to Oliver.  I covered them all with a big clear garbage bag to keep the soil damp.  We were only gone a few days so I knew they wouldn't germinate before we got back.  While we were away a mouse had a hay day under there and dug up and ate most of the seeds.  A few survived and have since come up, and I have reseeded the rest.  It took me three nights of setting traps before I caught the little b#gger.  I had already caught one a month earlier that was kindly eating my lettuce seedlings off each night.  Tonight I was out there late and managed to get a slug that was just slithering up between the sunflower pots.  It's me against them, in all sorts of ways. 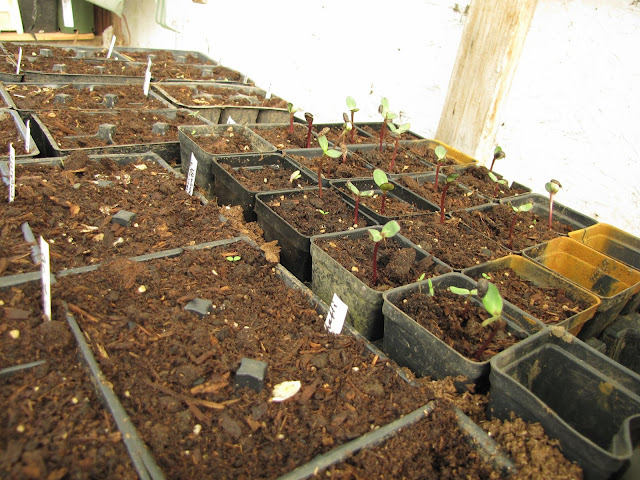 Outside, we've added a bit of red and white to the blues.
Deutzia. 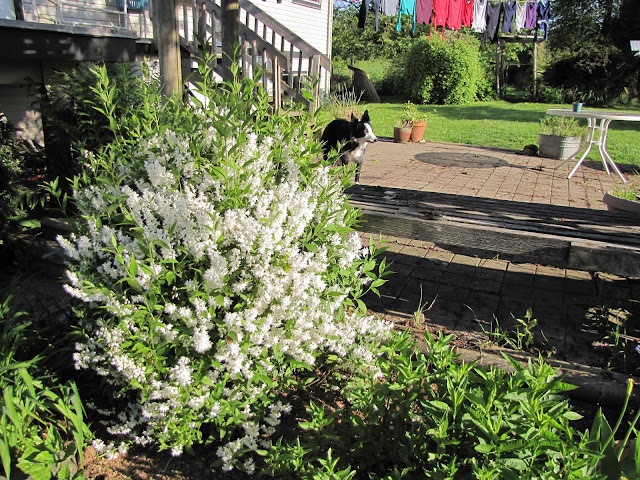 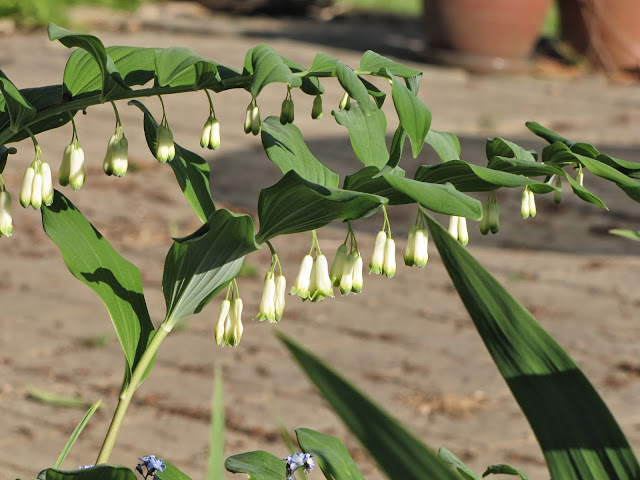 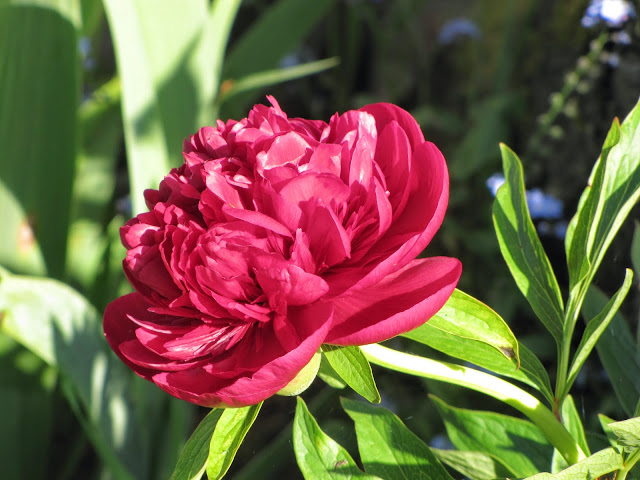 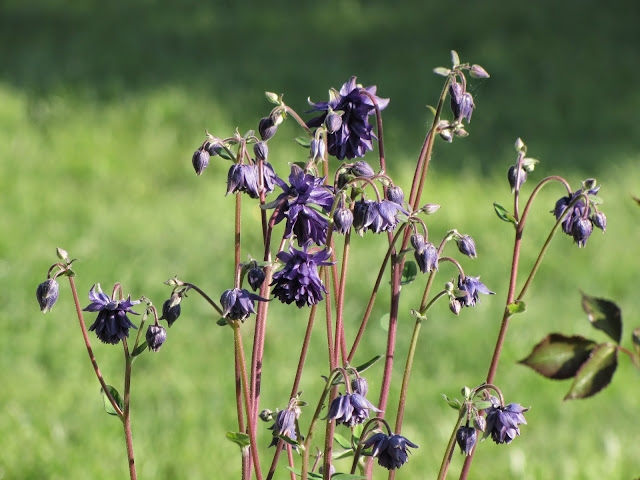 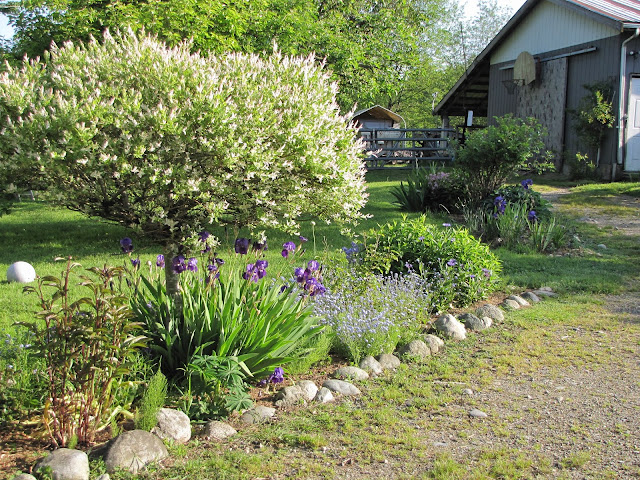 Okay, that was sort of a boring post.  I'll see if I can do better next time.