I used to read posts from some of my bloggy friends, in which they were complaining about the amount of ticks in their area.  I used to feel all smug because as far as I was concerned, ticks were not an issue here.  They are mentioned occasionally, but I had never found one on our dogs.  Many years ago I removed a tick that had taken hold in the corner of my mum's dog's eye, but that was the extent of my experience.  They were not something that I spent any time thinking about.   That all changed about a month and a half ago.  I was massaging Luna on the back of her neck.  I felt a little bump, and I've felt bumps before and whenever I've looked, it's always been nothing.  Maybe a bit of an old scab, but it was never a tick.  Well this time it was.  I was shocked, and a bit grossed out.  I had to google the best way to remove them.  I got an old pill vial and put some rubbing alcohol in it.  Grabbed the tick with the tweezers and pulled.  The skin pulls up and then breaks free from the tick, and the tick gets popped into the alcohol to kill it.  Some polysporin is put on the skin at that spot, if the dog hasn't moved and you can actually find the spot again.  Then a few days later I found three more on Luna.  We couldn't decide if they had come back from the Okanagan with us.  Or maybe Luna had picked them up at Princeton.  We had stopped to walk the dogs there and I remember Luna rolling in the grass, and Princeton has loads of deer.  Then one evening Jake was doing something and then suddenly stopped and scratched up near his head.  I felt around and found a tick on him.  I've lost track now, but I think we are up to about a dozen, including some just lately. The worst were two that I missed somehow on Calli.  Kind of on the underside of her jaw.  The biggest one was the size of my finger nail, or a gross swollen small grape.  It still makes me shudder to think of that one.  I figure we have ticks here.  In fact I know we do, because yesterday morning I was sat right here at the computer.  Earlier I had felt like something was crawling on me.  I had looked but seen nothing.  This time I felt it on my leg, so I pulled up the bottom of the jean leg, turning it inside out, and there on the inside of the jean was a tick wandering around.  I itched all day, and more than once yanked my t-shirt off to have a check.  I've done so much reading about ticks my mind is whirling.  What types we have here, incidences of Lyme disease, paralysis, etc.  It's mind boggling, and scary, and I just want them all to go away.

This is the one that was on my pant leg.  It's trying it's best to 'just go away', but is stuck in the egg yolk on my breakfast plate.  It looks like a male American Dog tick, but some sources say we don't have those here, so it must be a Brown Dog Tick. 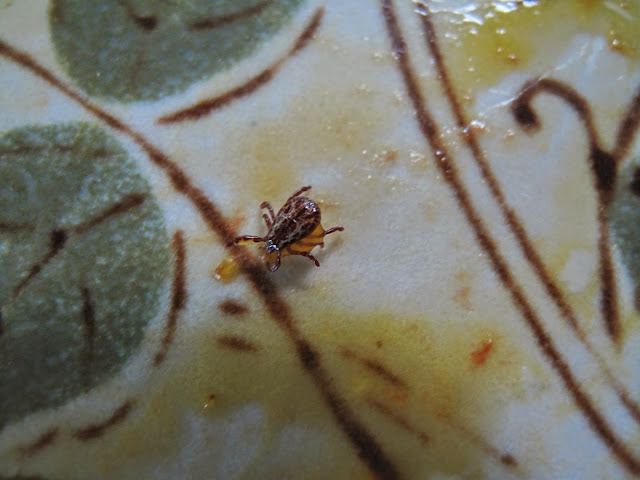 The dogs are getting the 'tick massage' daily.  I keep checking my head and neck.  I read that Rose Geranium essential oil helps keep ticks away.  I need to find some of that.
If you really want to gross yourself out, Google 'ticks on dogs' and then click on 'images'.
You'll wish you hadn't.