While we were in Ontario, we did a few touristy things.  Meredith had a few places she wanted to see while we were there, and one of them was Parliament Hill.  These are the Parliament buildings above the Ottawa River.

From Wikipedia.....
Parliament Hill (French: Colline du Parlement), colloquially known as The Hill, is an area ofCrown land on the southern banks of the Ottawa River in Downtown Ottawa, Ontario. ItsGothic revival suite of buildings serves as the home of the Parliament of Canada and contains a number of architectural elements of national symbolic importance. Parliament Hill attracts approximately 3 million visitors each year.[1]
Originally the site of a military base in the 18th and early 19th centuries, development of the area into a governmental precinct began in 1859, after Queen Victoria chose Bytown as thecapital of the Province of Canada. Following a number of extensions to the parliament and departmental buildings and a fire in 1916 that destroyed the Centre Block, Parliament Hill took on its present form with the completion of the Peace Tower in 1927. Since 2002, an extensive $1 billion renovation and rehabilitation project has been underway throughout all of the precinct's buildings; work is not expected to be complete until after 2020.

Sorry for the quality of the photos, for some reason I hadn't taken the camera that day.(Slaps myself)  My phone works well on sunny days, but not so well in lower light conditions. We did have a lot of 'grey' days while we were in Ontario.
Parliament Hill above the Ottawa River. 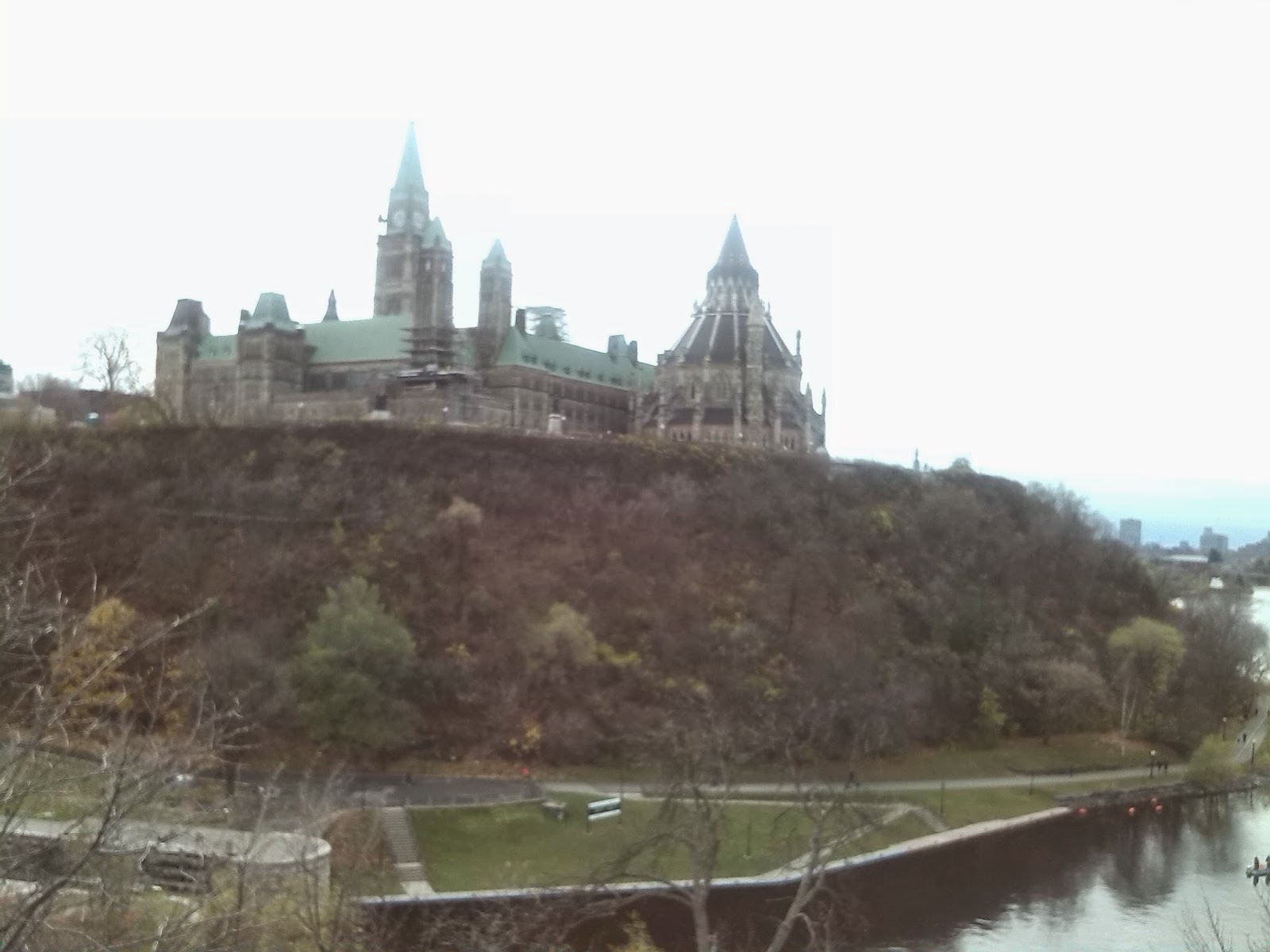 That round building is the library.  When the rest of the block was burned, that building was saved by a brave soul who got the metal doors to the library closed in time.  The library is amazing inside, it makes me think of something out of a Harry Potter or hobbit movie. 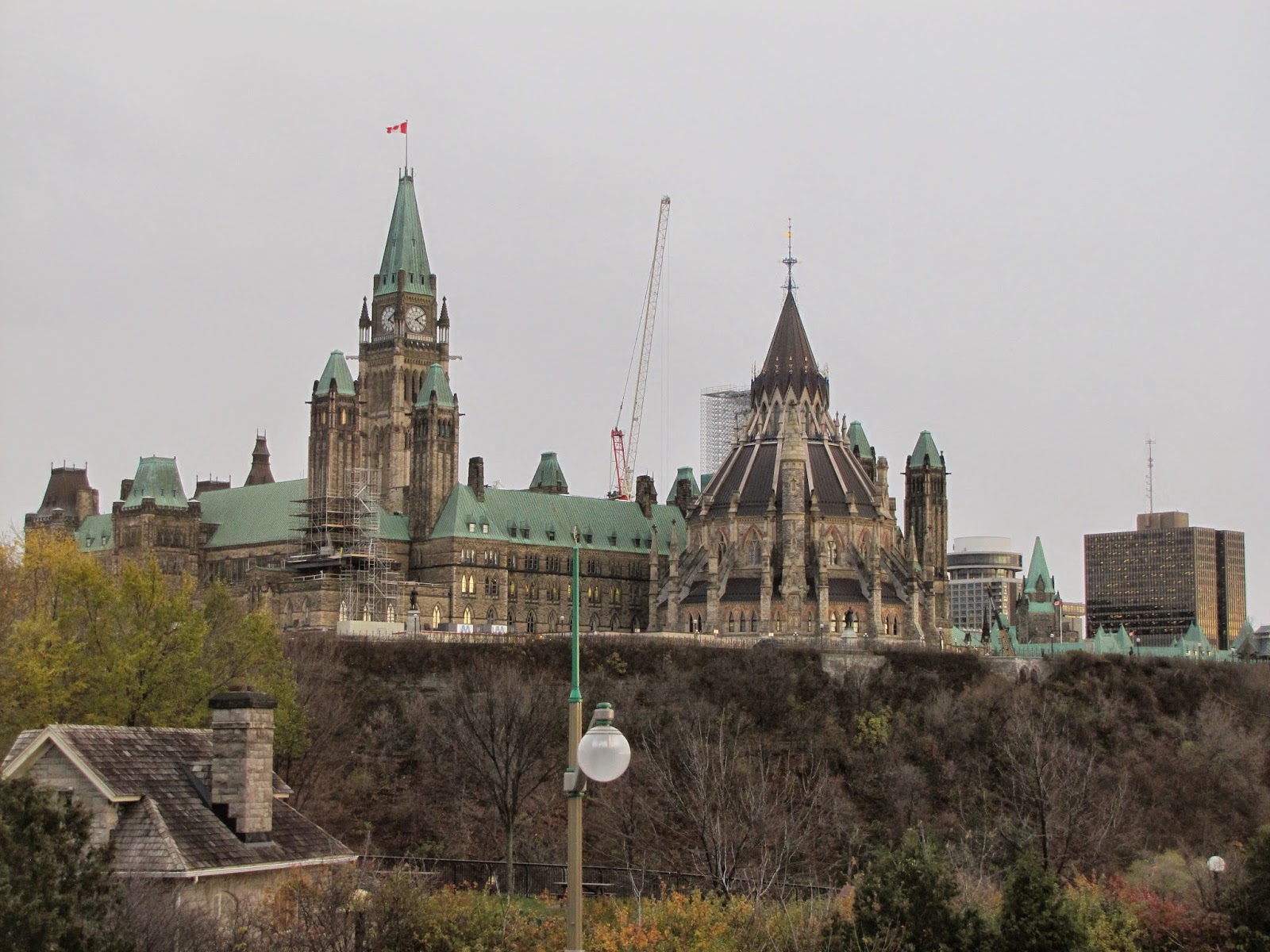 We had parked under the National Gallery, which we also wanted to visit that day, and walked the 1 km or so to the Hill.  That is the back of the Fairmont Hotel Chateau Laurier.

The front of the hotel, taken from the car. No, I was not stood in the middle of the road. 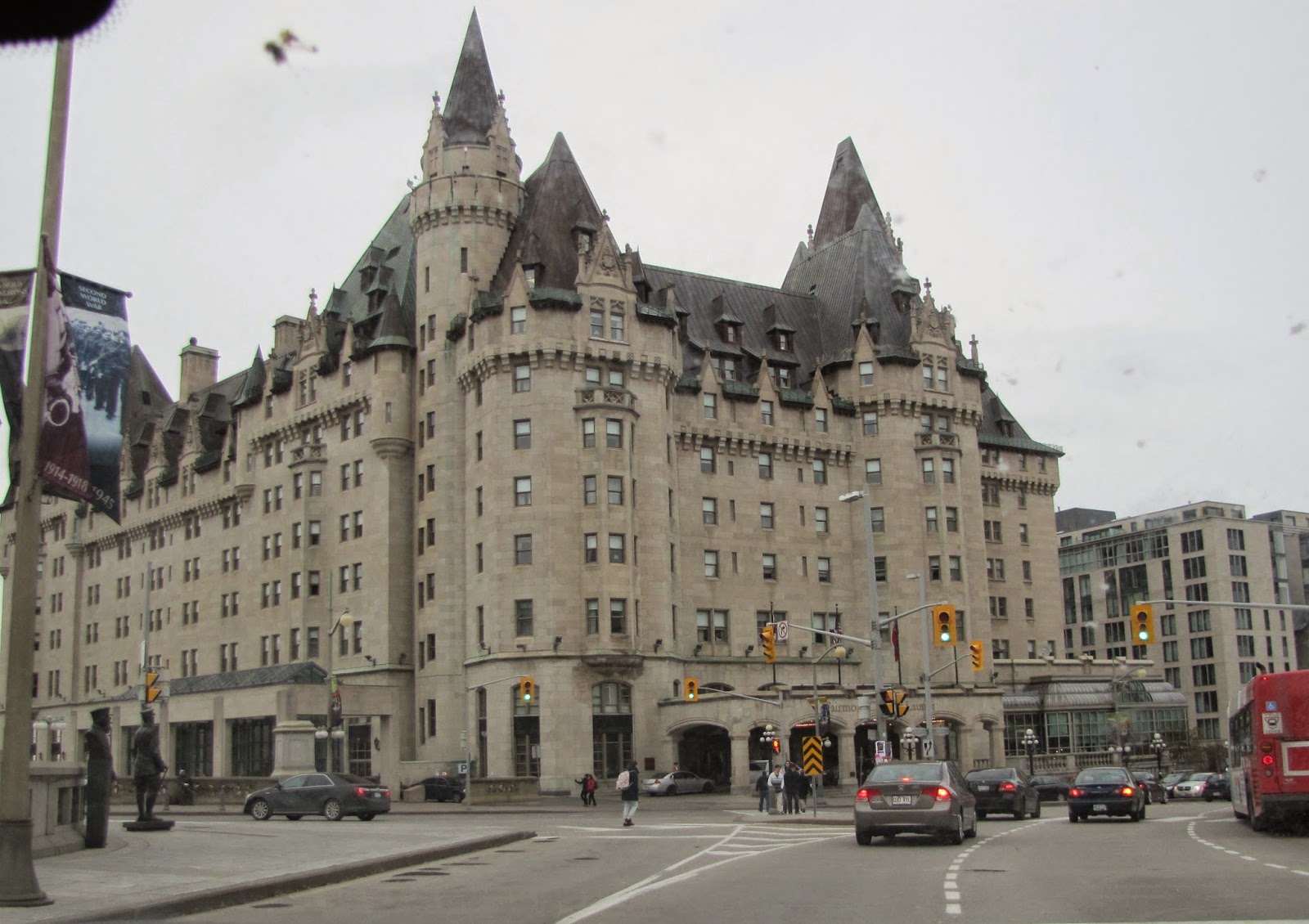 Looking at the east side of the East Block of the Parliament Buildings.  That is a bridge in the foreground that passes over the Rideau Canal and it's many locks on it's way up the hill from the Ottawa River. 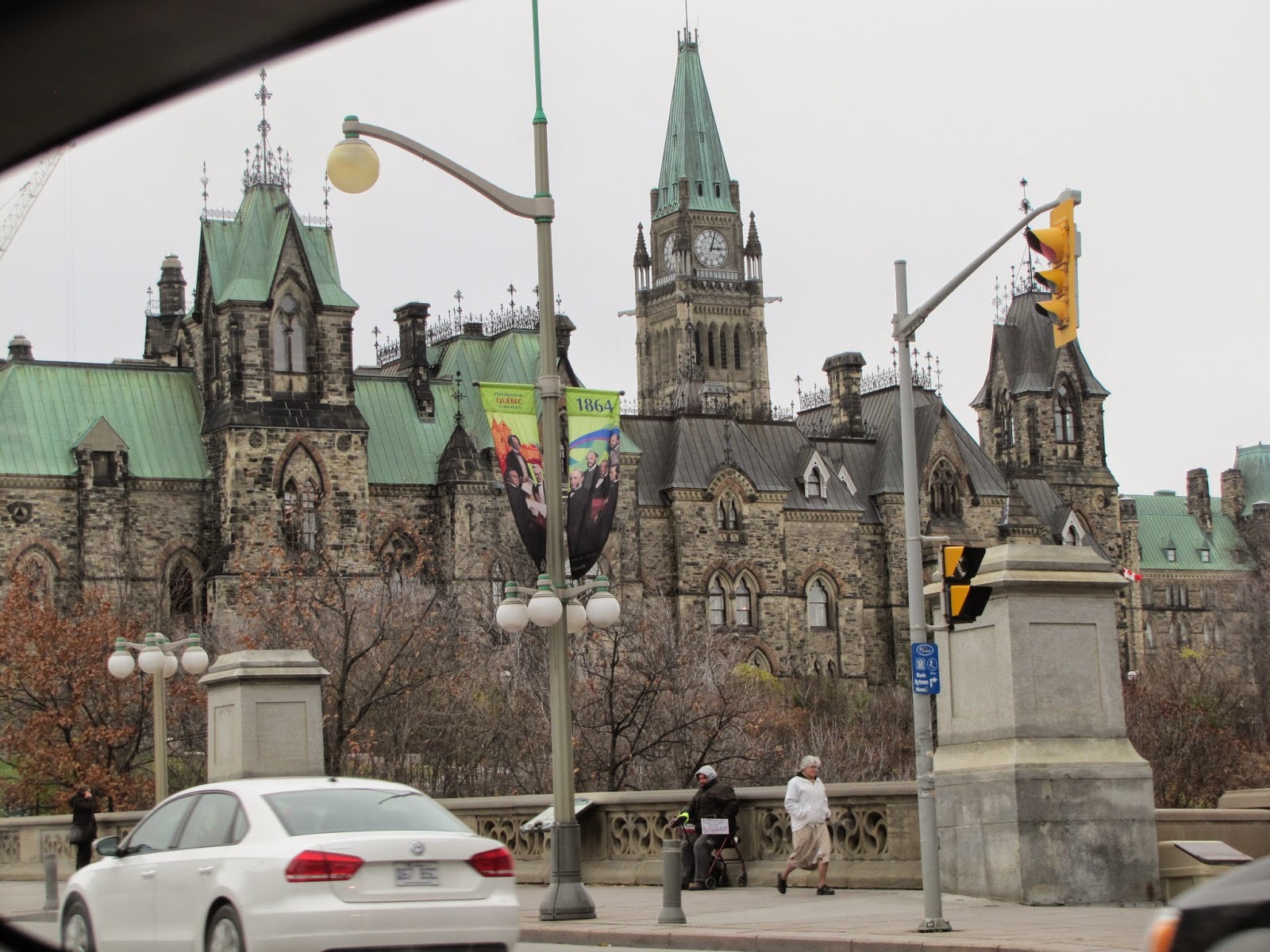 The locks are closed down for the season.  The canal above these locks becomes a huge skating rink in the winter if the weather cooperates . 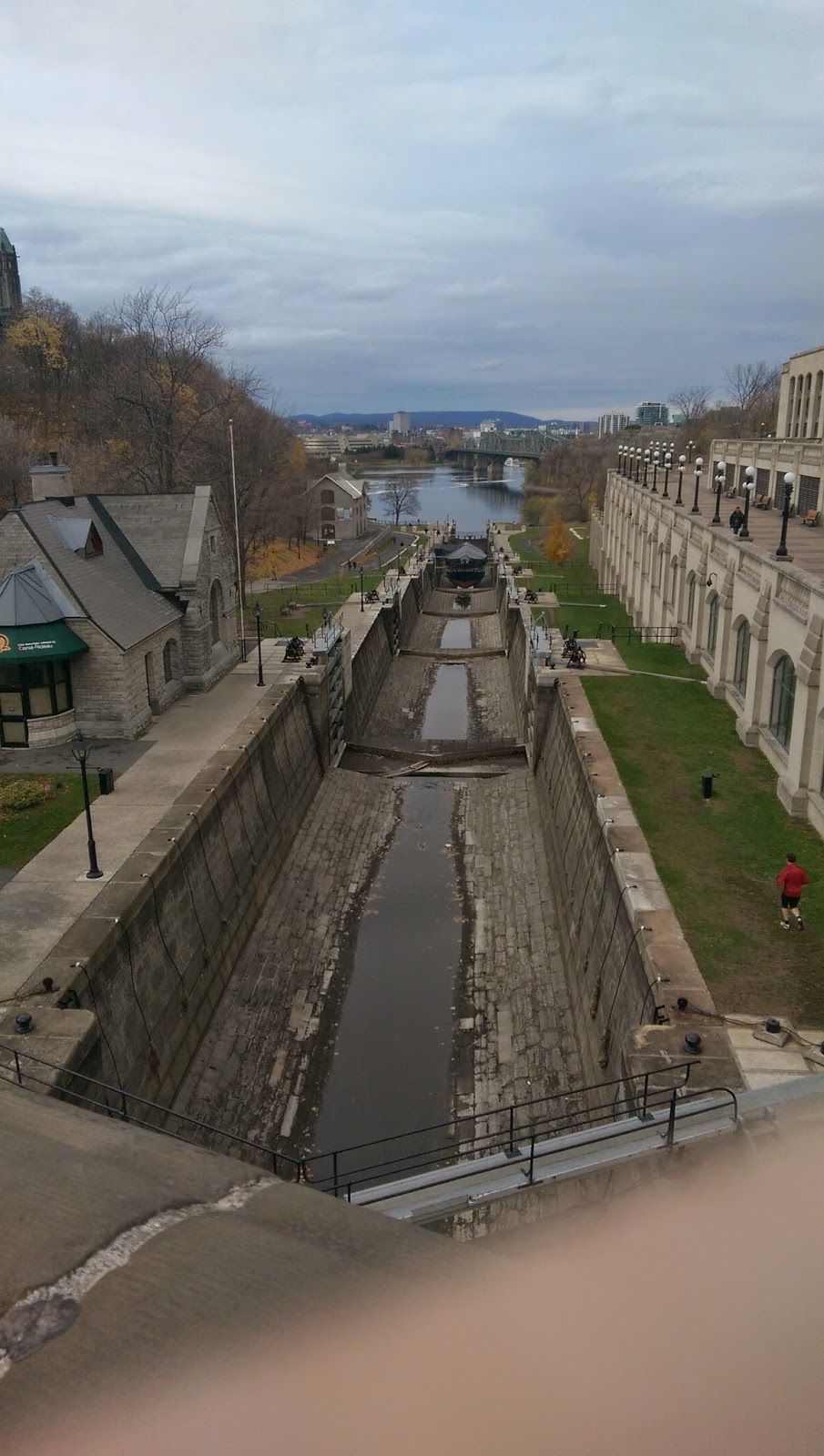 Peeking through the fence at the south side of the East Block. 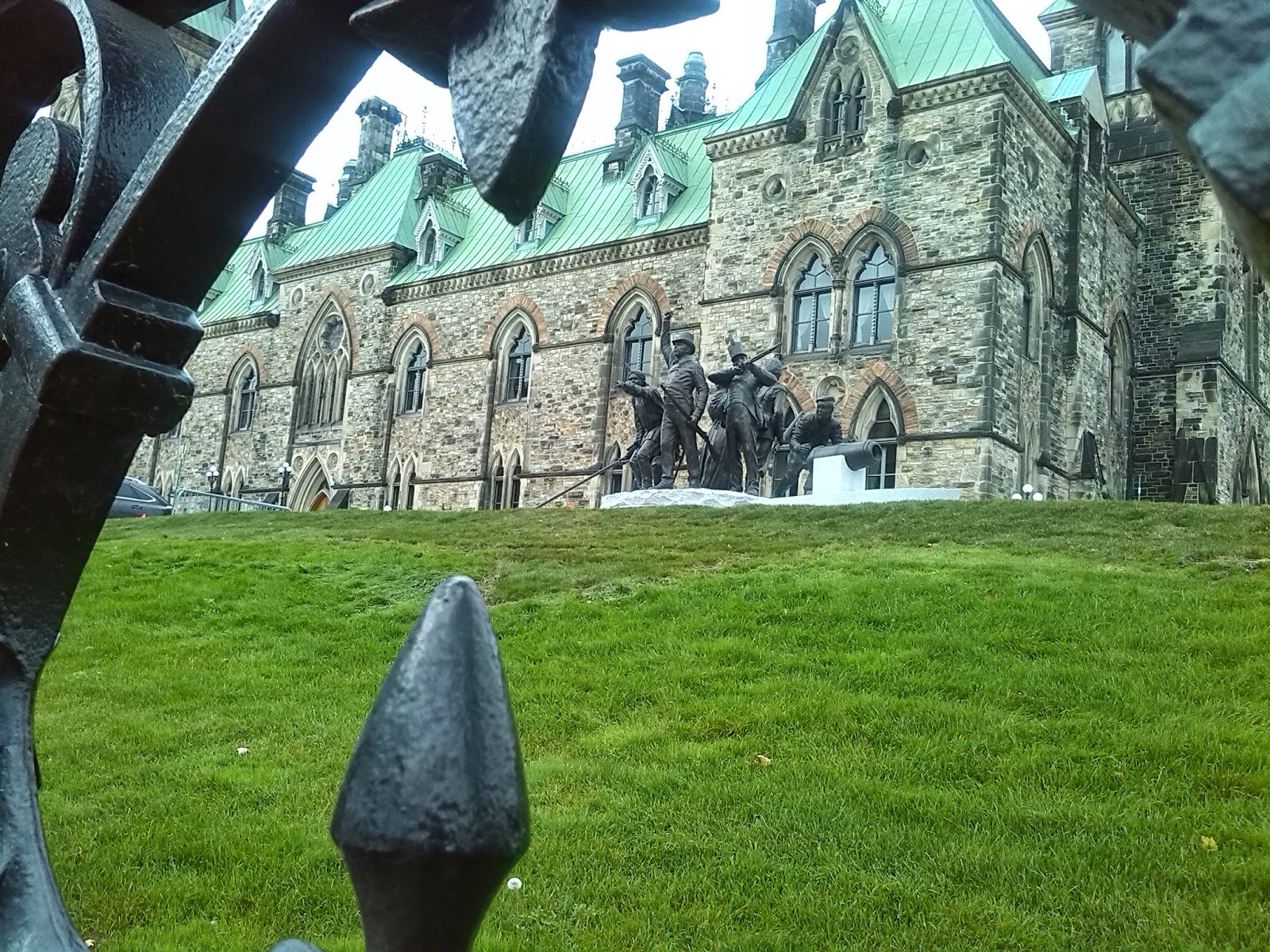 Cathy and Meredith on the walkway to Center Block, with the East Block in the background.  I'm not sure how many of my American readers were aware that we had a terrorist type incident at Parliament Hill in October.  A soldier guarding the Tomb of the Unknown Soldier at the War Memorial was killed.  The terrorist then drove to Parliament hill, and ran up in front of that East Block, where he hijacked a car and drove to Center Block. 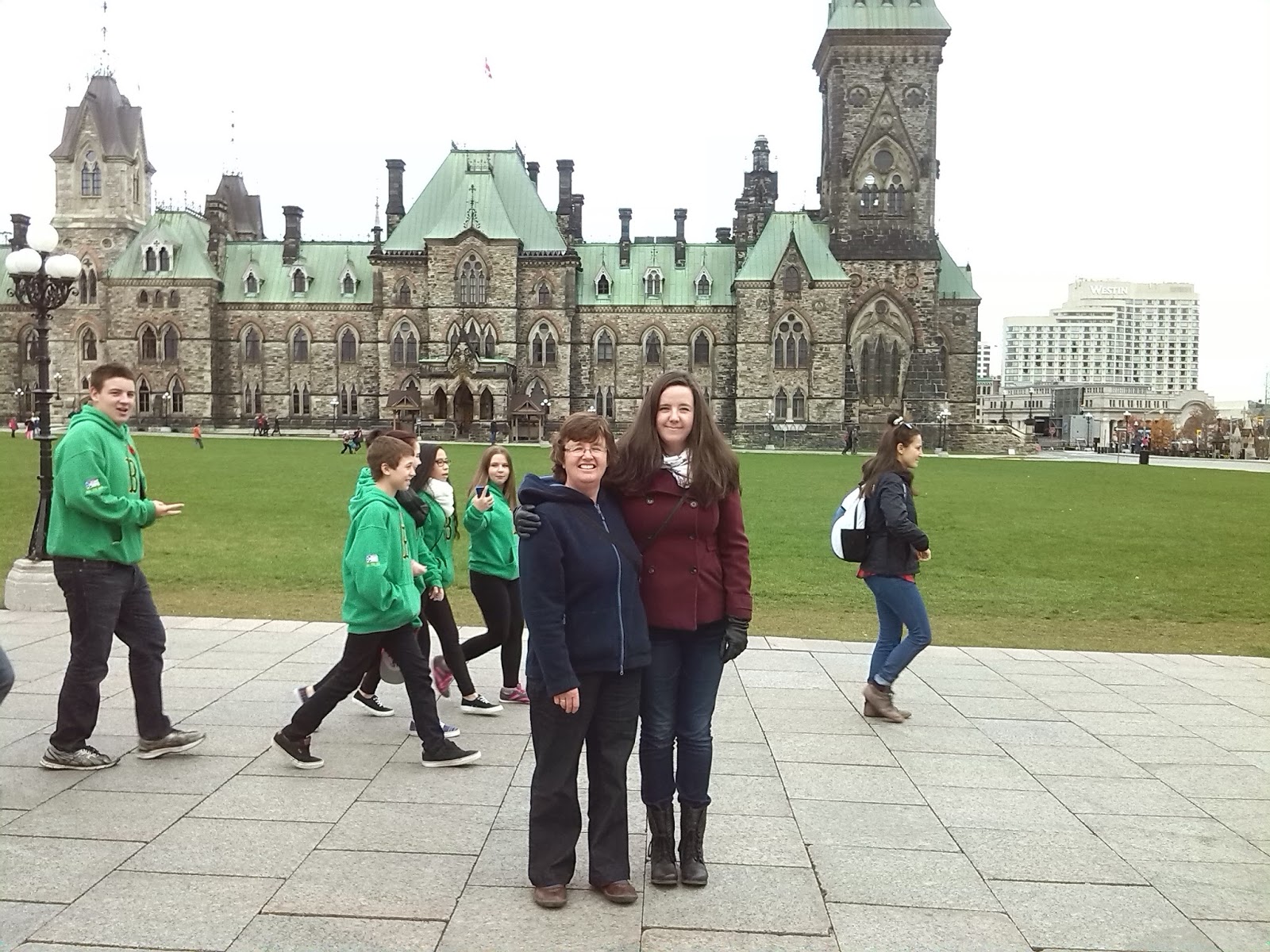 The West Block was under wraps and being renovated. Center Block with the Peace Tower. 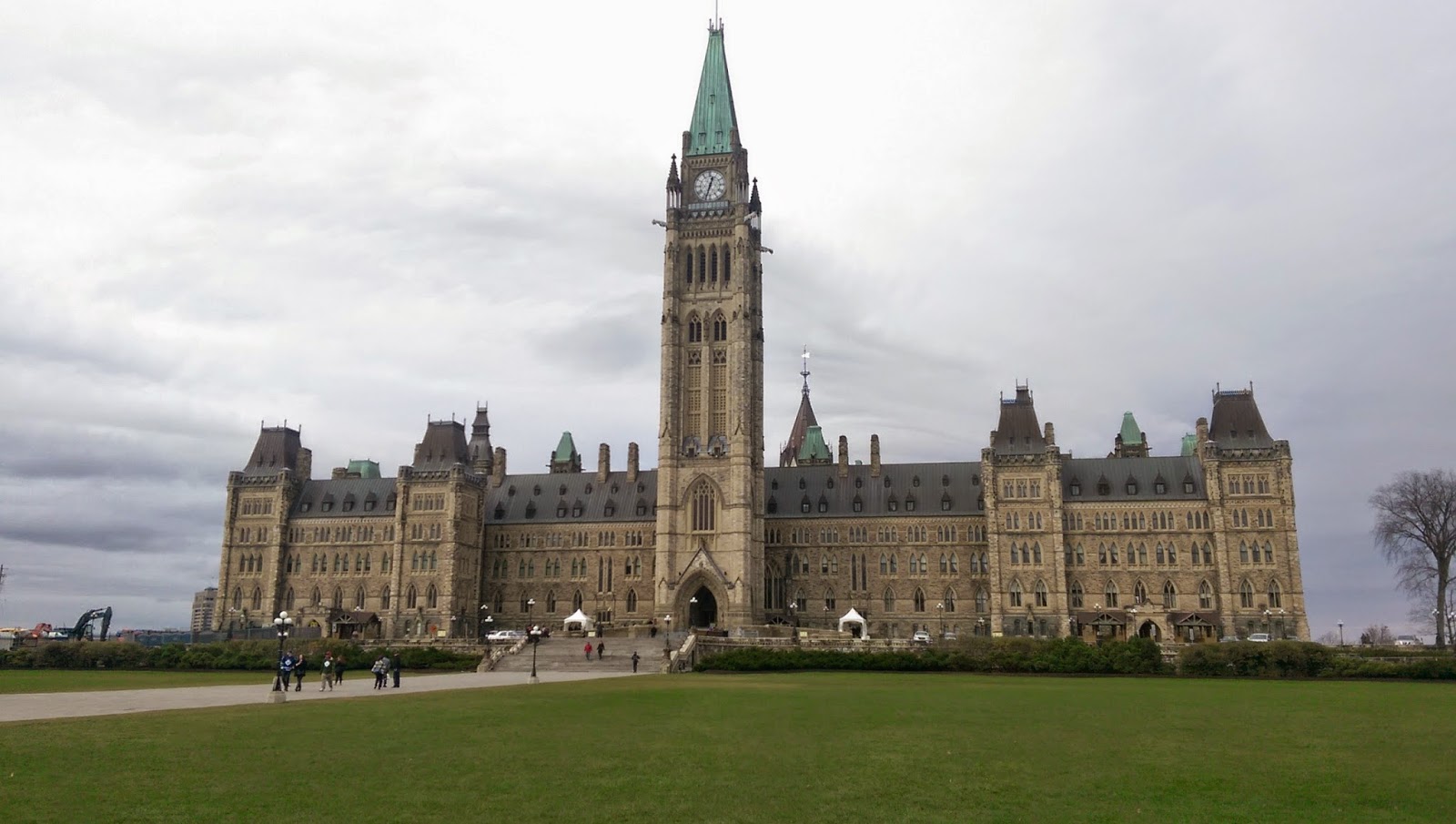 The terrorist jumped out of the car to the left of the Peace Tower, and raced in through the center door, heading towards the library whose pointed roof is just visible behind and to the right of the tower.  Close to the library he was shot and killed by the Sergeant at Arms.

I have no idea what the security was like before that incident, this being Canada where we generally have few of those types of events.  When we were there we had to stop at that white tent to the right of the Peace Tower and allow our purses to be examined.  Just inside the door we were stopped again and informed that the next available English (French being the other national language) tour wasn't for nearly another two hours.

We got our tickets and decided to head over to the War Memorial, which is just across the road and east a little bit.  It still has it's ceremonial guards.  They are there for one hour shifts.  We watched the next two being piped (bagpipes) in, and these two being piped out. I laid a poppy on the tomb in respect to Cpl. Nathan Cirillo, only 24, a father and dog lover.  Gunned down from behind.  It makes me feel sick.
There was extra security there when we visited.
I have to admit I checked over my shoulder more than once while we were there and at the Parliament Buildings. 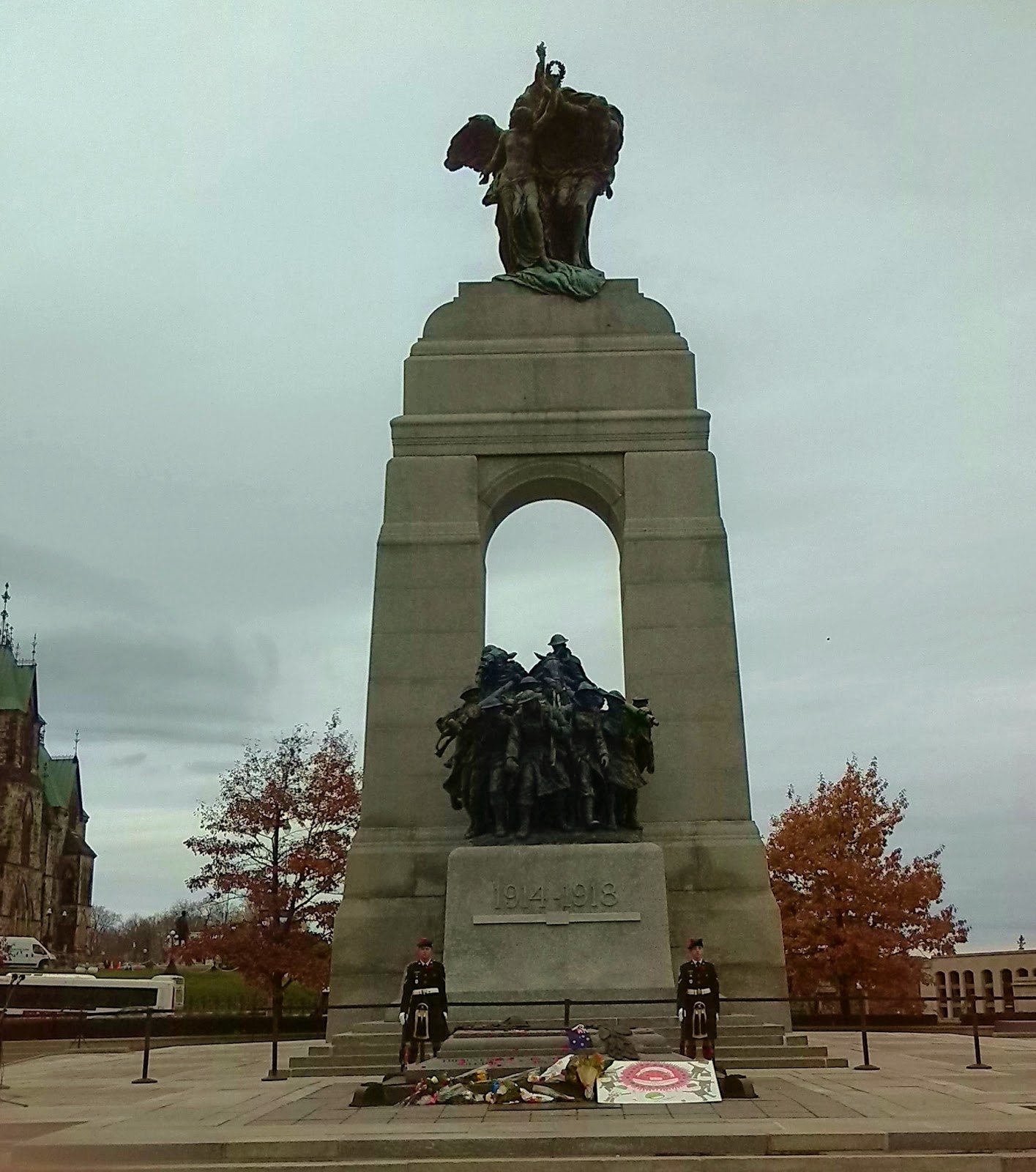 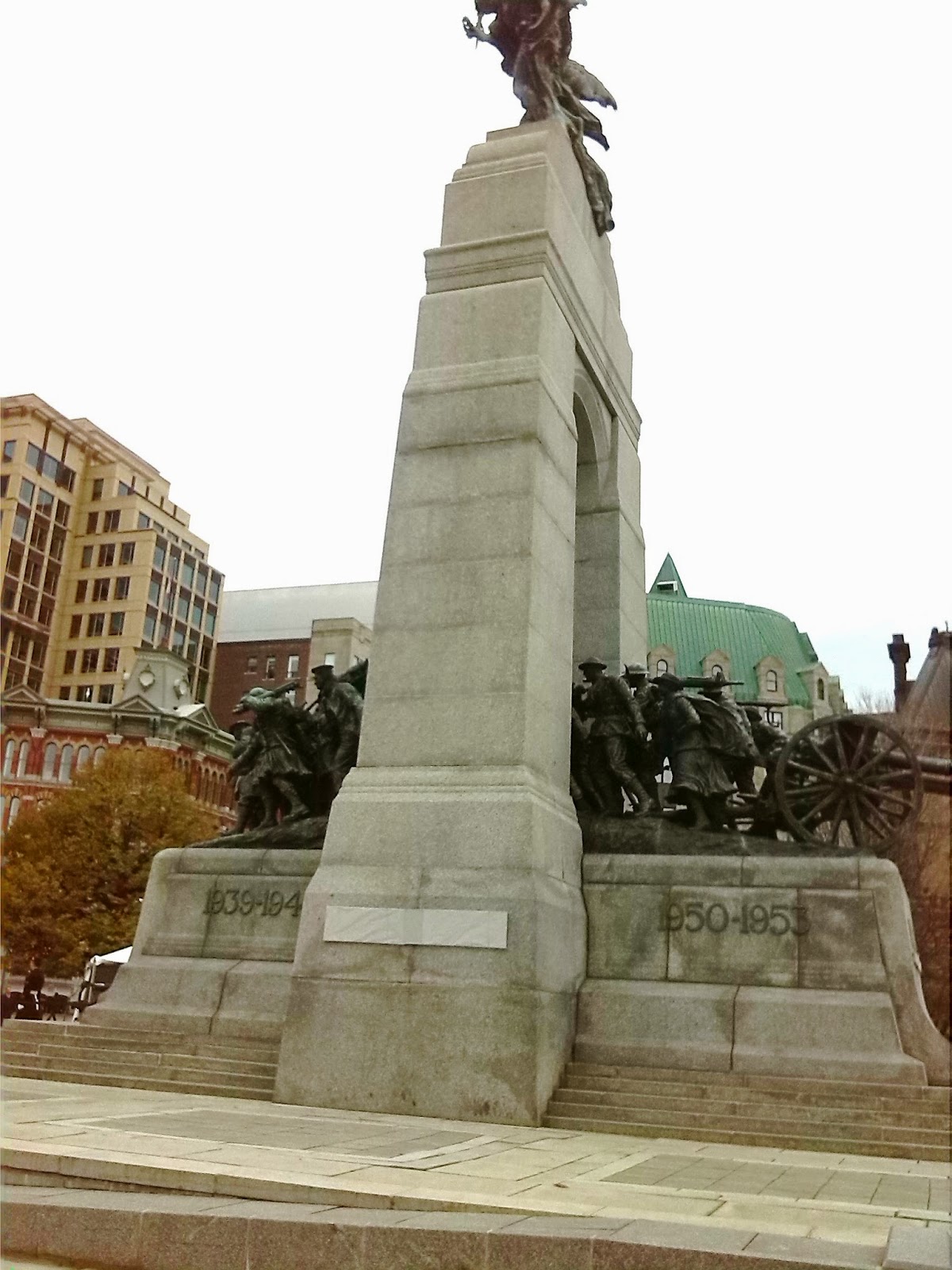 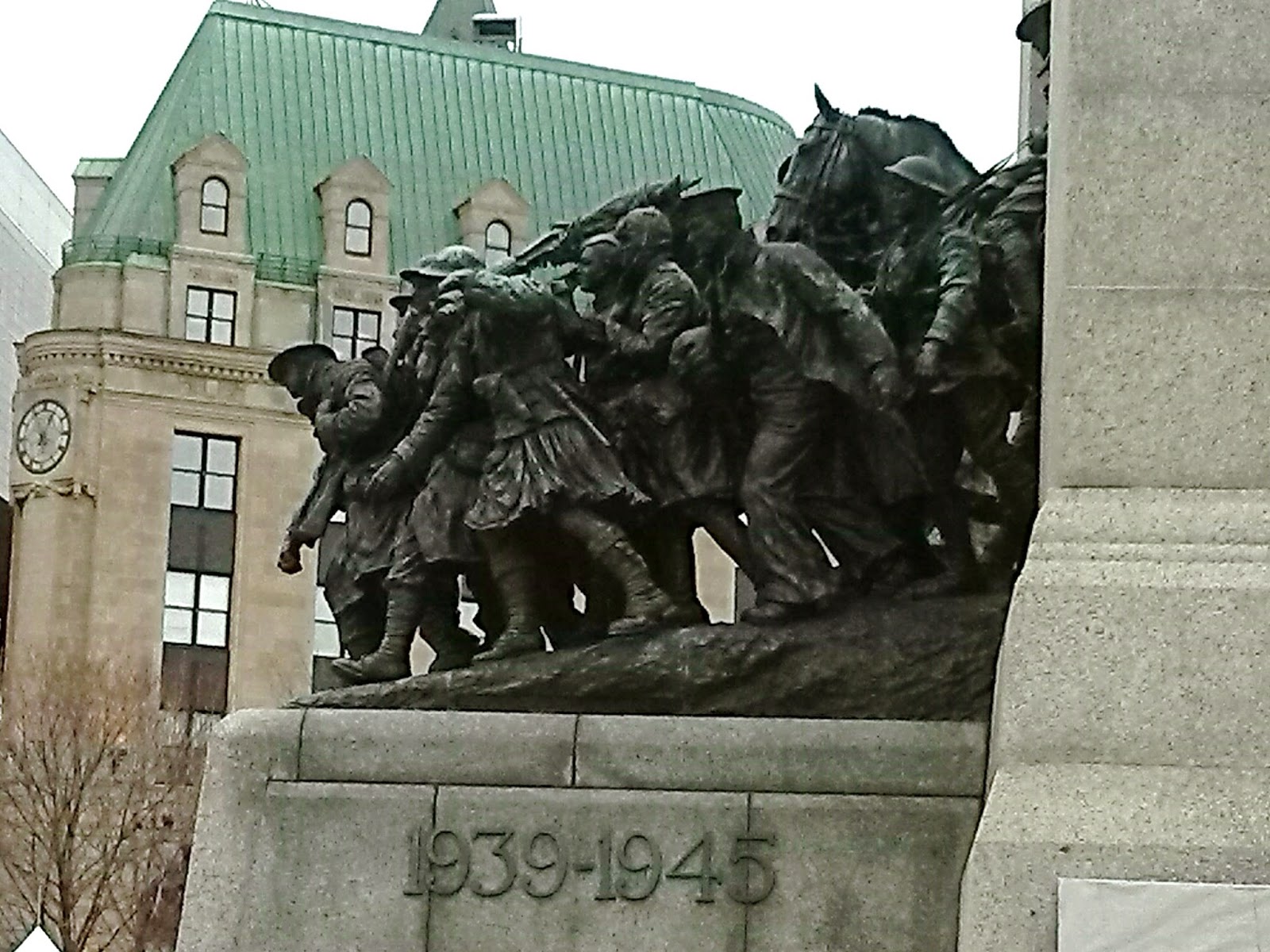 After the War Memorial we thought we would walk back to the National Gallery and look in there while waiting for our tour of the Parliament Buildings to start.  Well of all things, it was closed that day.  We couldn't believe it.  So we killed some time walking around, had a bit of lunch in an undesirable part of town, went in a store or two.

This is the US Embassy.
We saw that woman get a going over with the metal detector wand before she was allowed in. 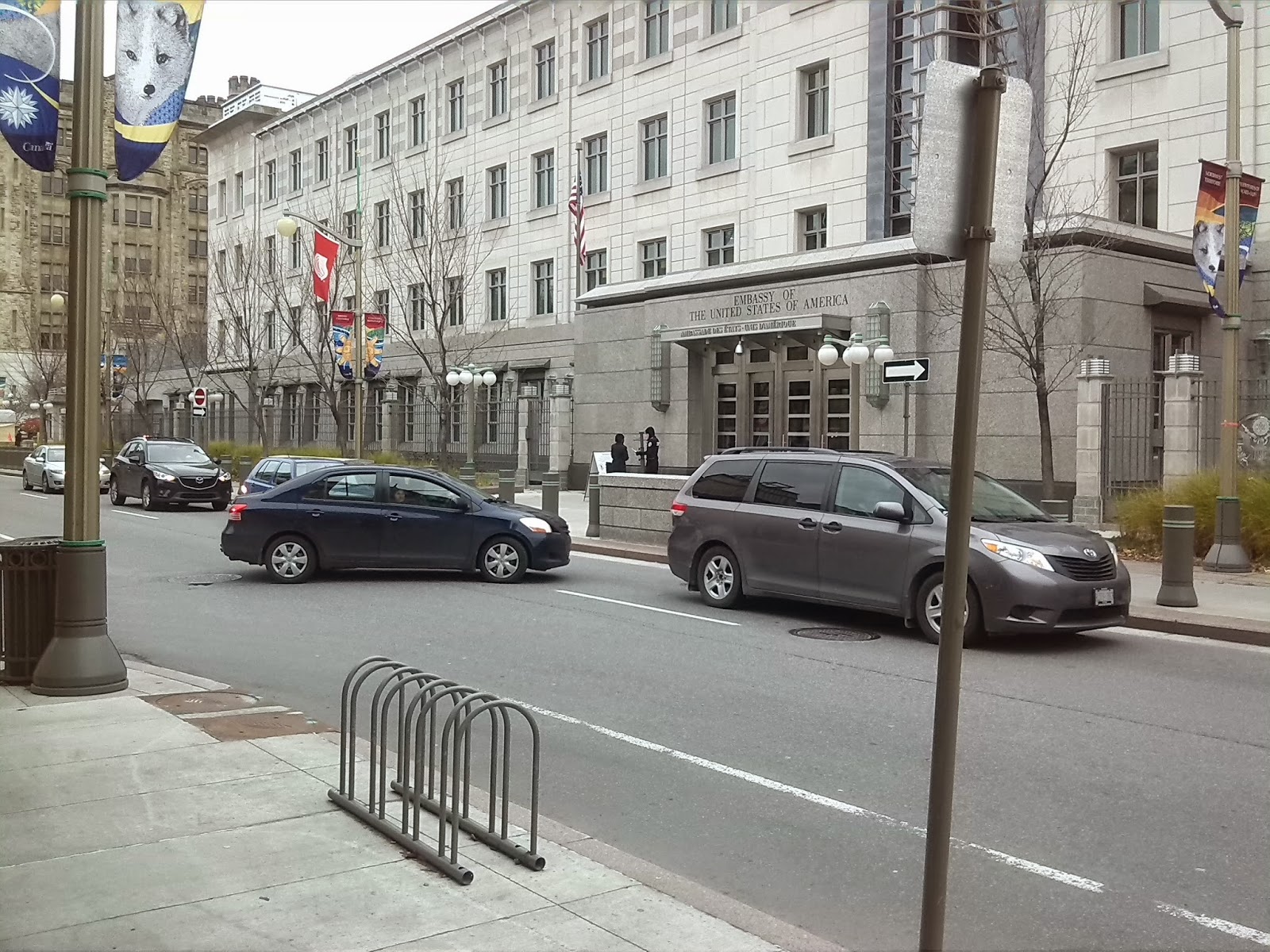 We got back  to Parliament Hill in time for our tour, and had to do the regular airport type security check before we were allowed to continue.  The tour guide mentioned the terrorist incident, but said he wasn't allowed to discuss it since it was still under investigation, and wouldn't be answering any questions regarding it.  When we had come back out from the libary, one of our group did ask where the office of the Sergeant at Arms was.  It was the first door in a hallway right next to where we were stood.  The S at A came out of that office and shot the terrorist dead, probably about where we were stood.  A bit of a creepy feeling, definitely.

Then we walked back again to the National Gallery and the car, and through rush hour traffic back to Smith's Falls.

Here is a link to some really great pictures of the Parliament Buildings. Check out the library!
https://www.flickr.com/photos/parlcanada/