I have one more Ontario story to tell.
A couple of days before we flew home we drove to the historic town of Brockville.  Well most towns in Ontario are historic.  That part of Canada has been populated by non-natives much longer than the western part of the country.  I love the old brick and stone buildings.

It was a nice but very blustery day.  We were down along the river and decided to take a photo with the river in the back ground, and that is the US on the other shore.  I put the camera on a table thing, put the timer on, and we rush into position.  I had left my hat on the table.  All of a sudden a gust of wind blew my hat off the table and it was heading rapidly for the edge of the walkway and the railing between it and the river.  Cathy ran to save it, and didn't get it right away, you know how it is when the wind is bouncing things around, you always seem to be just one step behind it.  So I ran to help, and Cathy said I just about tackled her. Never!:)  Anyway the hat was saved, but in the meantime the camera got a shot of Meredith laughing at it all. 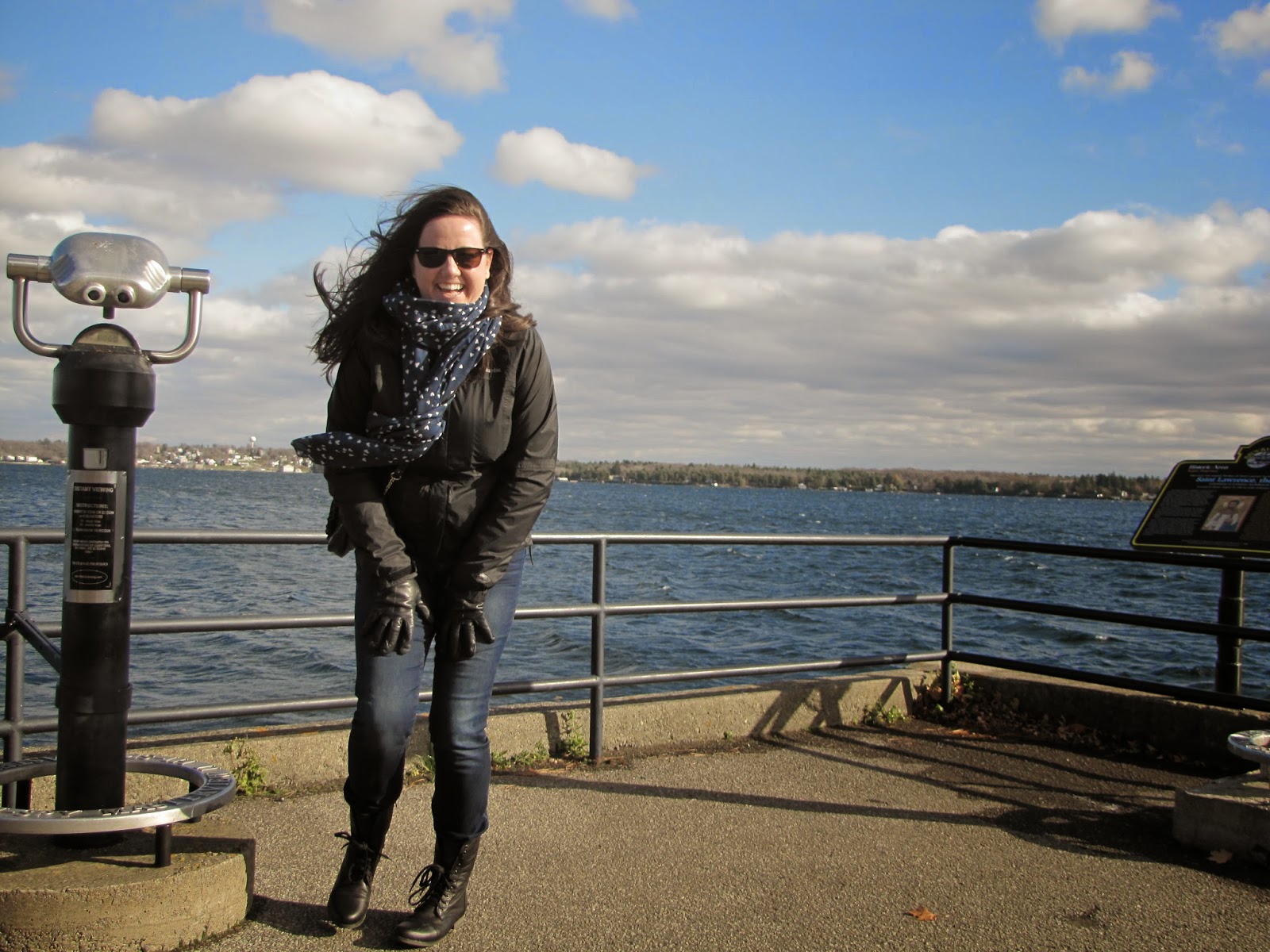 Here we are, safely hanging onto our hats! 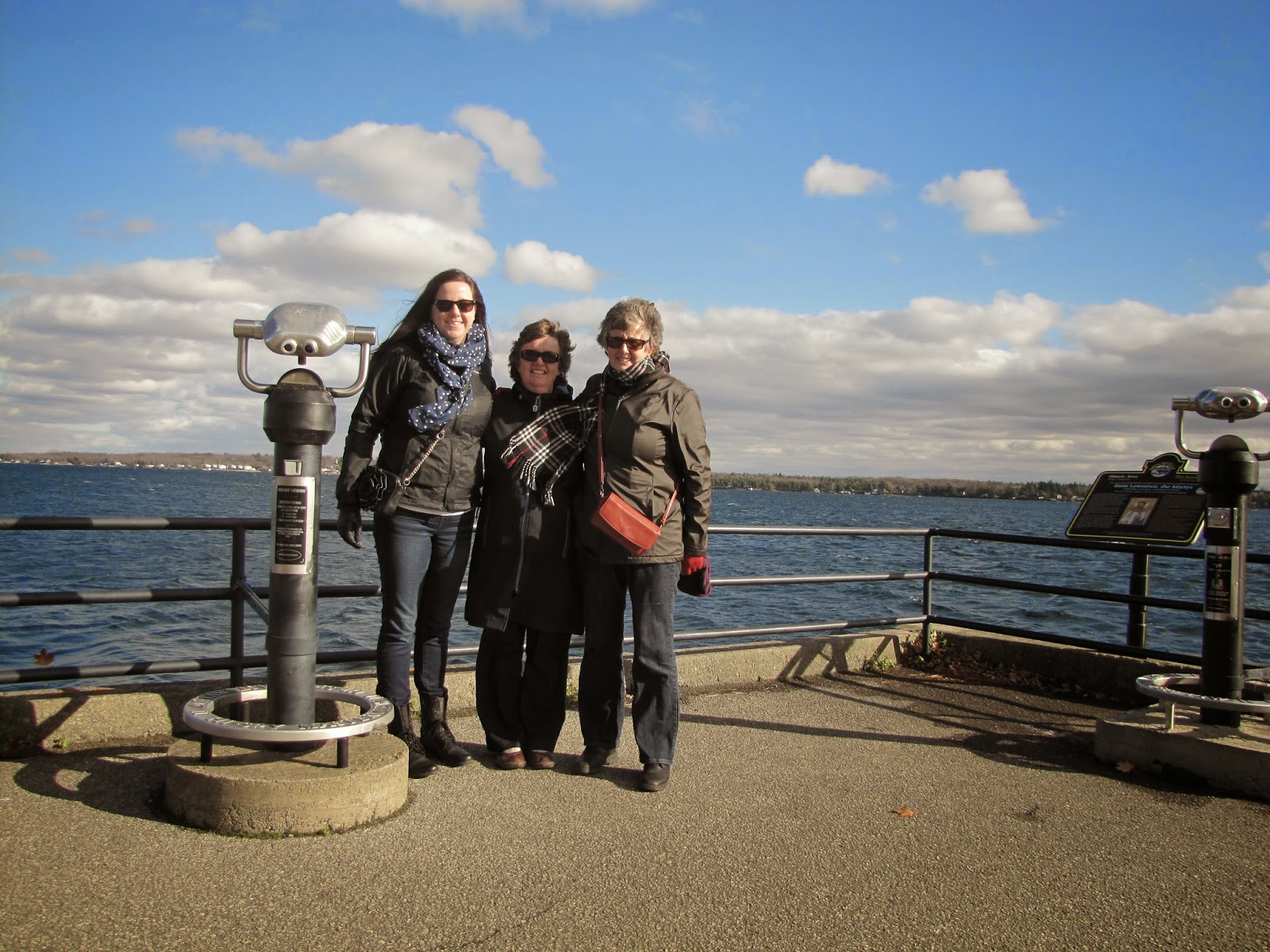 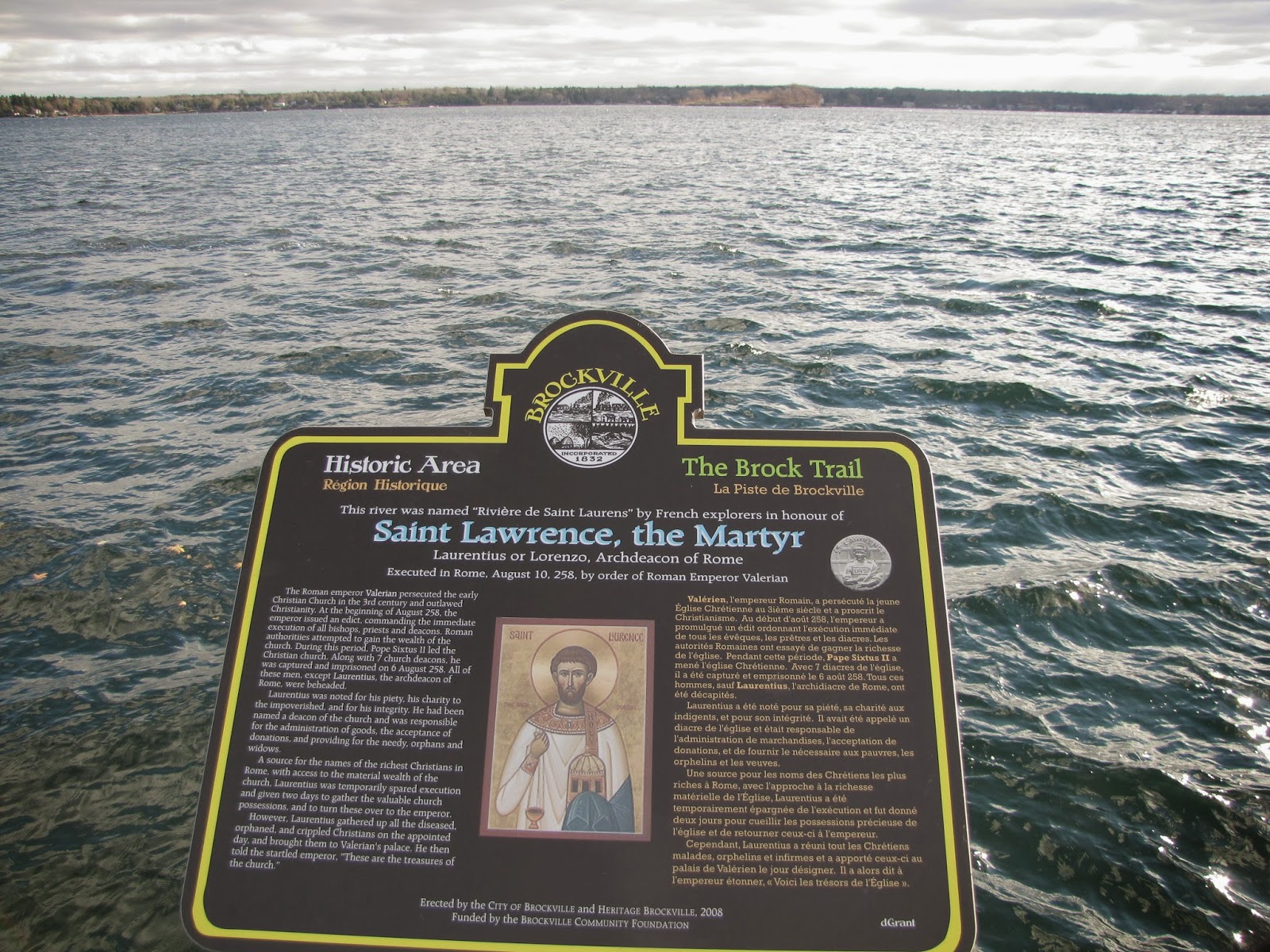 Meredith said she had never tried one of those viewer things, so she stuck her looney ($1 coin) in, and the blasted thing didn't work.  I looked and saw it was only 10x magnification, so gave her my camera and told her to look through that, as it was 20x 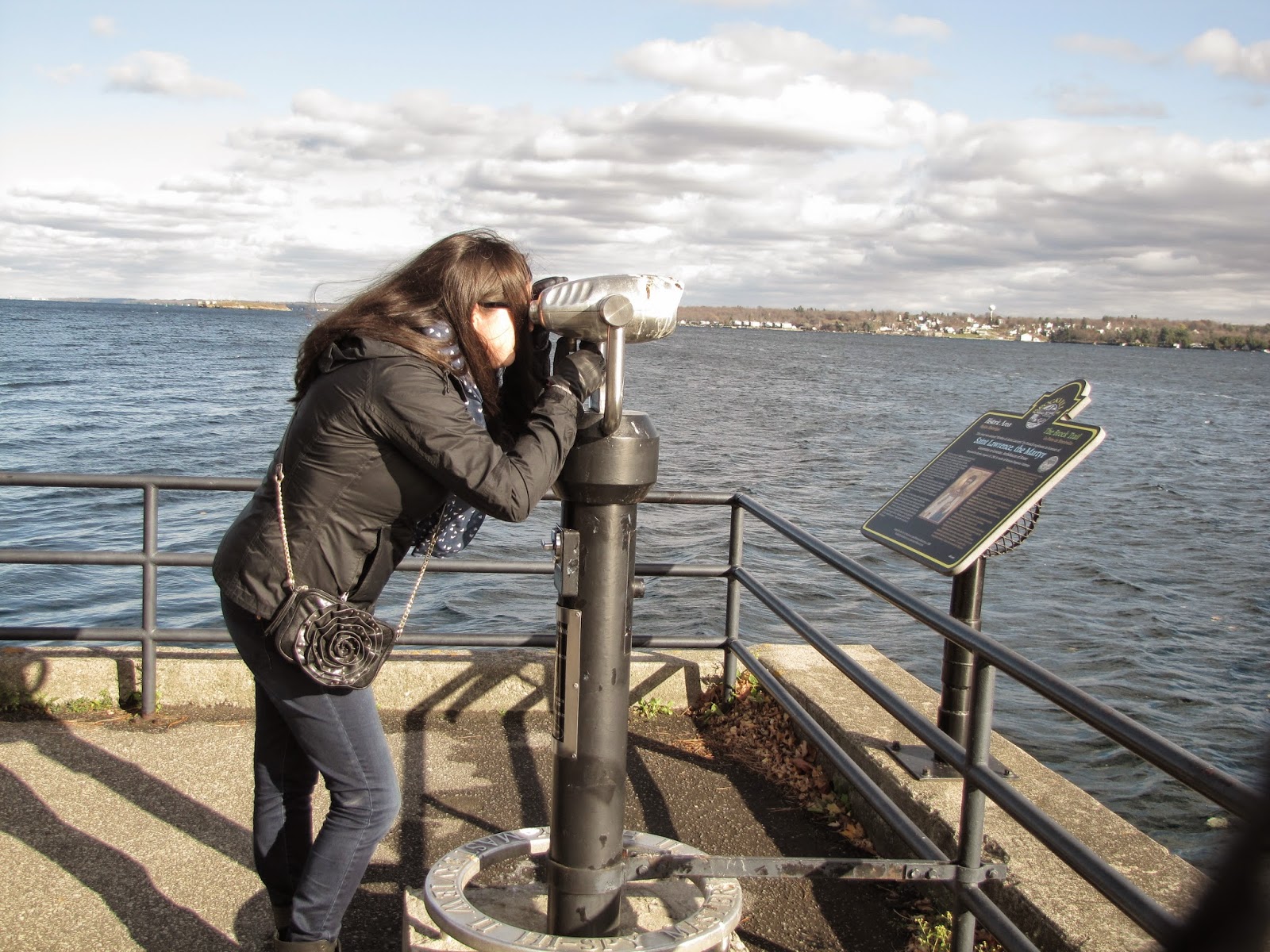 Morristown New York, on the other bank. 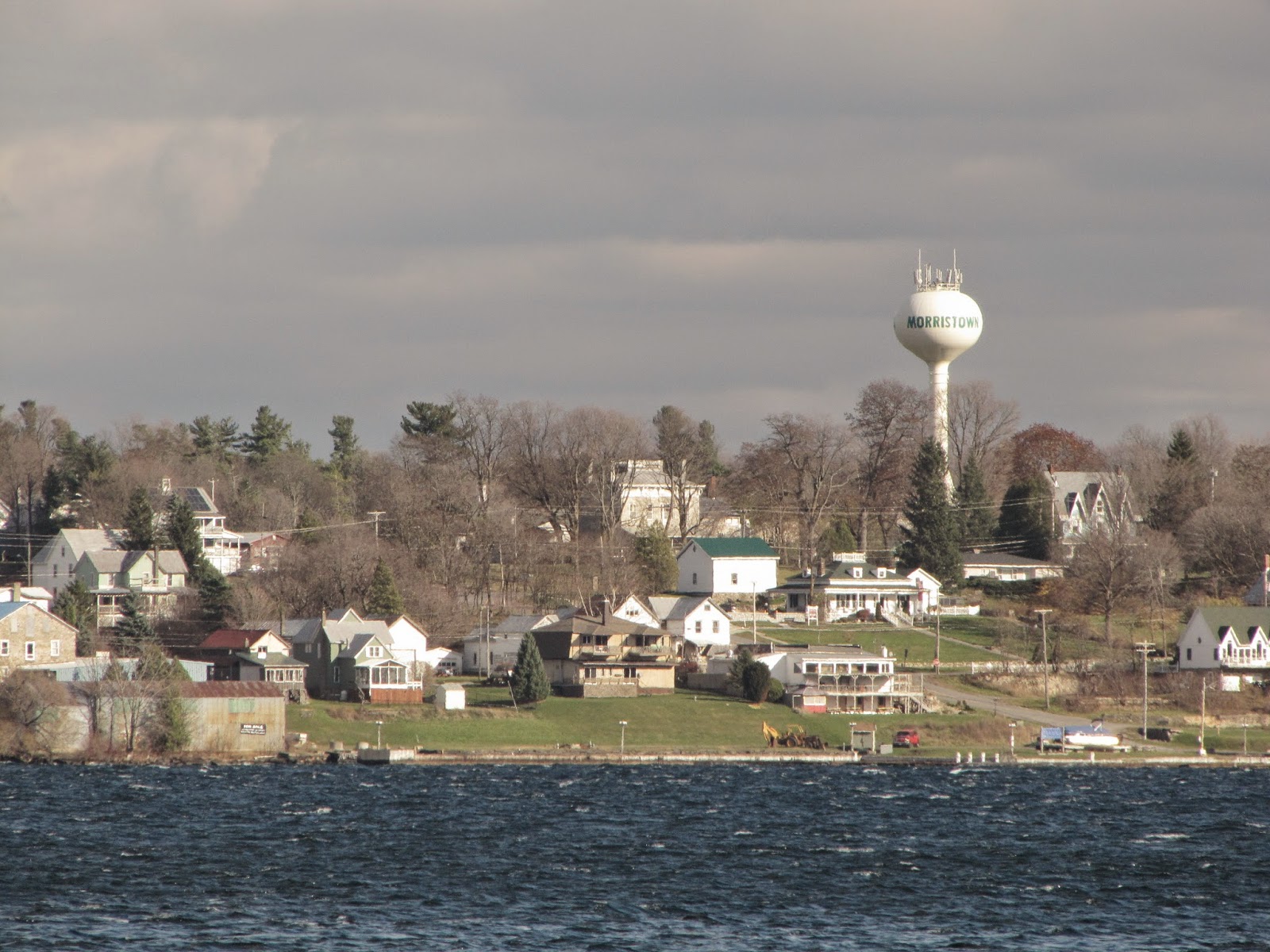 One of the cute restored brick houses.  Cathy treated us to some good fish and chips, which came wrapped in newspaper, and we sat in the car and ate them.  This house was just across the street. 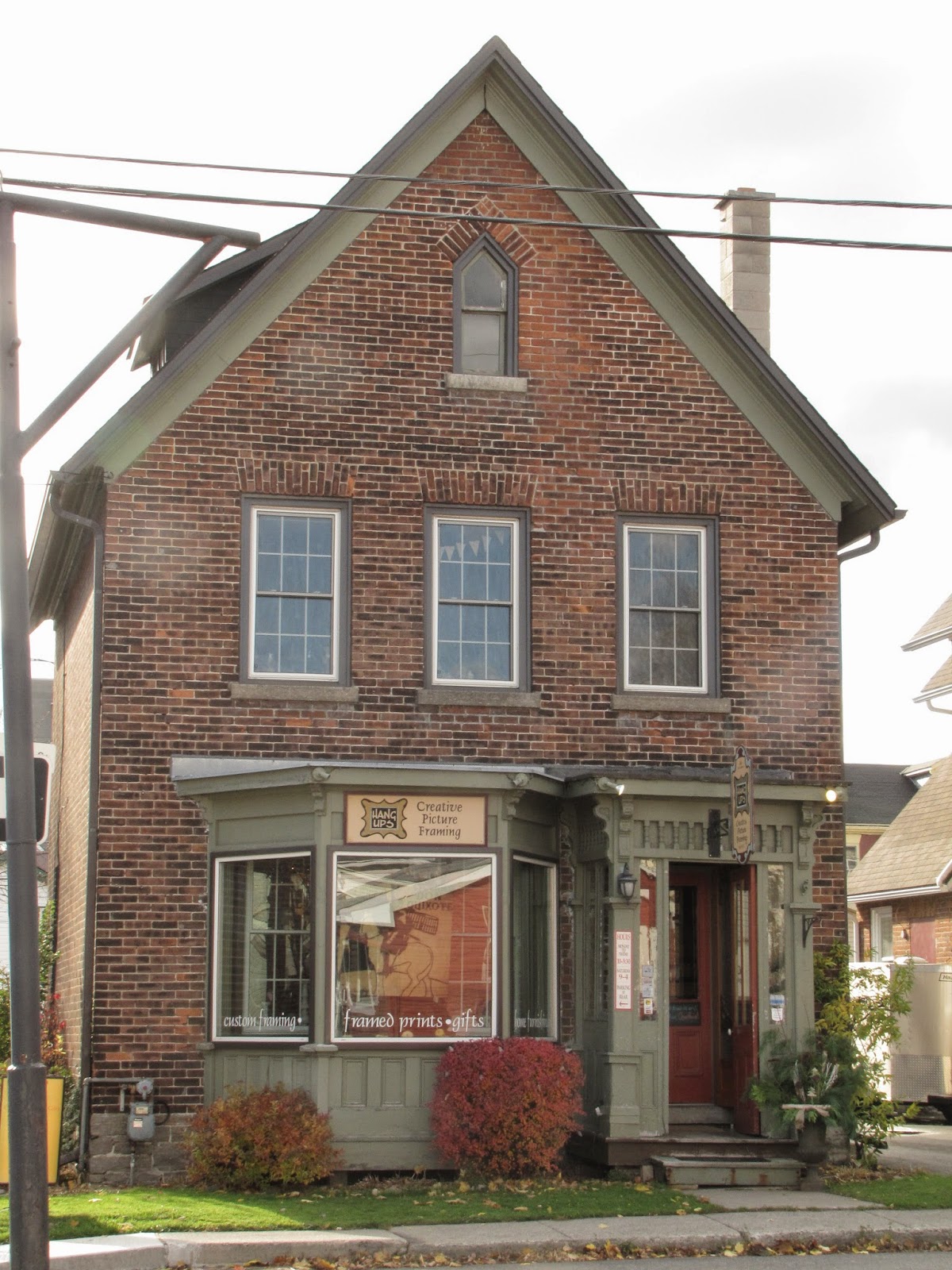 We did visit a few little towns on our trip, and wherever we were, we always checked out any thrift stores.  We didn't get much, after all we only had carry on luggage since you now have to pay for checked bags, and the carry-ons were pretty full.  I picked up a few small things, and Meredith bought 4 blue and white English China bowls.

While we were in Brockville we checked out the Salvation Army thrift store.  We wandered around a bit, and I asked Meredith if she had found anything.  She said no, well except there was a nice blue and white, made in England, teapot and creamer and sugar bowl in the cabinet. They were silent auction items.  But since the silent auction didn't end until Nov. 21, and we would be long gone, there was no point.  I went and looked at it and said why not, figuring Cathy could pick it up if it was a fluke and Meredith actually won it.  I didn't even ask Cathy if it was okay, but knew, being the great sister she is, that she wouldn't have a problem with it.  (Sucking up here!).  So Meredith said she would pay $20 for it.  The starting bid was $10, and there were no other bidders at that point.  We put down $20 and Cathy's phone number.  I thought about it more and said let's change it to $15. So we did.  It was kind of one of those cases of wanting to win it, but the logistics of the whole thing were kind of silly, so really we shouldn't win it, if you know what I mean.
Well I'm sure you know how this is going by now.  So on Friday Cathy got a phone call to say that Meredith had won the teapot set.  Meredith hadn't take a picture of it, and didn't remember the company that made it, but it looks something like this one, without the cups and saucers (courtesy of Ebay UK).

Cathy told Meredith that it would be a birthday present from her.  She is driving down to pick it up on Tuesday. I hope she feels well enough to do it, as she is suffering with a doozy of a chest cold right now.  She will try to fit it in her carry-on the next time she takes a trip our way.  She will probably not be able to bring as many clothes, but that's okay, it's a good excuse to hit a few thrift stores here.

Yesterday was Meredith's birthday.
It was a milestone birthday.
Happy Birthday dear daughter.
May there be much blue and white china in your future!