I've seem to have been otherwise occupied lately.  I don't seem to have been near the computer as often.  My sister visited from Ontario for almost two weeks, we had a great time.  She is good at getting me going on things, so things got done.  (I always think that the hardest part of many jobs, is actually just getting yourself started).  We had lots of fun, took a flying trip to Oliver, as in went one day, cut the grass, watered everything, and came back home the next day.
Yes, we have grass! Okay, a bit patchy, but much better than the dirt patch we started with in the Spring. Cathy cut a lot of grass and pulled a lot of weeds while in B.C. 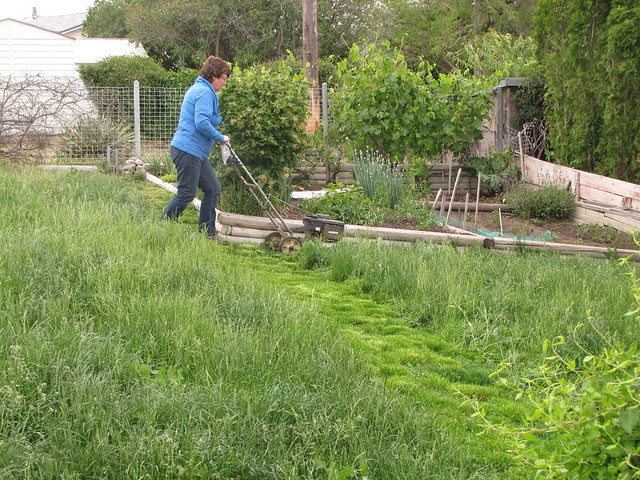 After we got back, we found out that a few days before we got to Oliver, there had been a localized devastating hail storm that damaged much of the fruit crop.  I thought something had been eating some of our plants, but I guess it was hail damage.

On the way there we stopped to look at Spotted Lake. 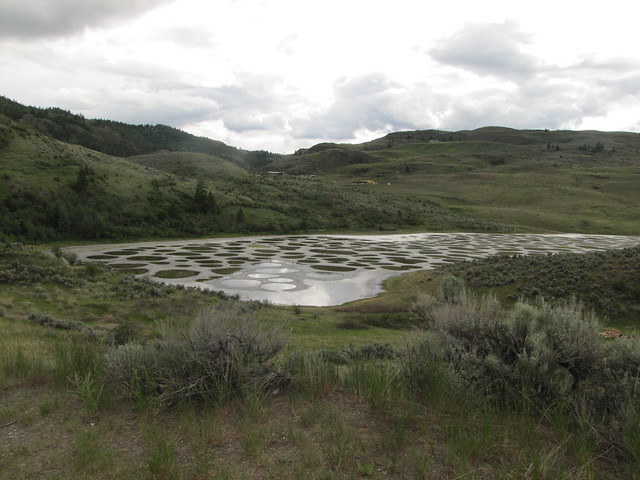 There's even a heart shaped spot! 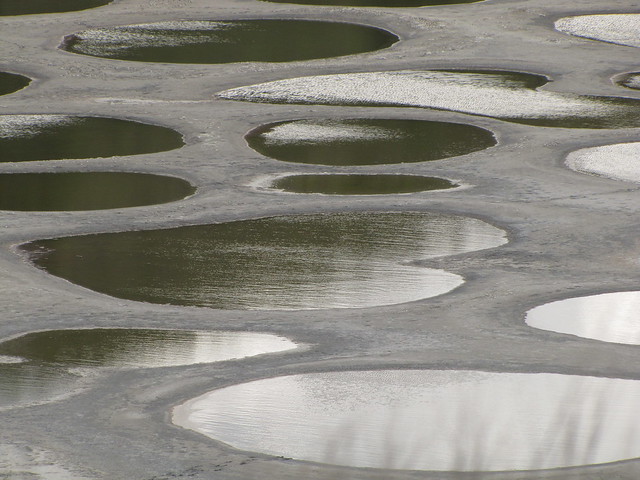 While we looked, someone was looking at us. 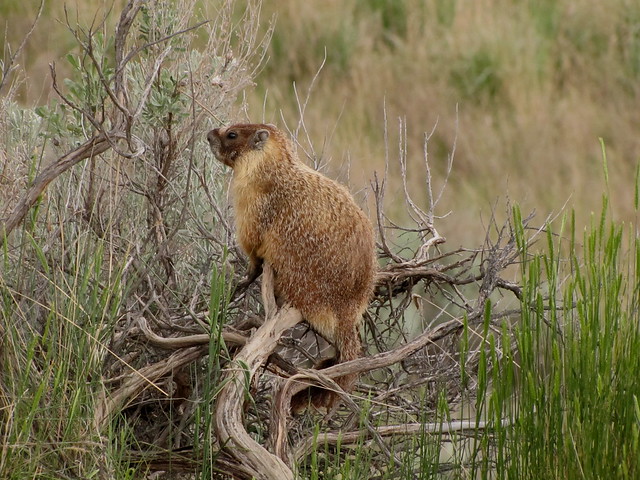 We visited lots of thrift stores, and had lots of fun doing it.  We bought lots of stuff.  The best one was in Oliver, when they were having a 'bag' sale.  For $5 you could get whatever would fit into that paper bag.  We didn't bother trying the stuff on in the store, just took it back to the house and tried it on there.  Seems I thought I was skinnier than I am, but I still got some good deals.

I graduated to a 'smart' phone from a flip phone.  Phew, a steep learning curve.  I had to google how to answer a call.... I can hear you laughing:)  The google answer was only partially right.  I finally figured out that I had to drag my finger from the center pulsing reciever symbol to the green reciever. What I read on google said to drag your finger out of the circle.  I guess at first I was dragging my finger towards the green phone, and then eventually I got too far away and wondered why I couldn't answer the call.  And then I figured out if I dragged my finger to the red reciever, I could end the call. Wow!  Anyway, I'm having lots of 'fun' with it.  We got rid of our land line and transferred that number to the cell phone.  Which meant, (long story) that we had to change internet providers.  So it's been an interesting couple of weeks.

Meredith got possession of her condo last Saturday.  She hasn't moved in yet, we are going to have a painting party soon.  Not sure when, I'm at the BC/Yukon agility regionals this weekend with Luna.  Meredith's helping Larry at the farmers market on Sunday.  Yes, the farmers markets have started in earnest.  Every other Saturday for me, and every Sunday.

And then next week Larry is going for cataract surgery.  No driving or much of anything physical for two weeks.
I spent a couple of panicky hours between 3am and 5am this morning, fretting over everything I haven't got done yet, but need to do.   So much to do, so much to do.....

On Monday I took the dogs to the chiropractors.  Luna has had an odd weird lameness with her back right leg a couple of times in the last month.  Turns out we didn't have an appointment on Monday, it was actually on Tuesday.  You get the sense something is wrong when you say your dog's names and the receptionist asks for your last name, and you are wondering why she has to look you up.  Thank goodness we only live fifteen minutes away.  We saw Dr. Lana Tuesday morning.  Calli was in pretty good shape, but Jake had a couple of ribs out.  We wondered if he had run into something or had been run into by another dog. He had been showing signs of being a little stiff at times, so I'm interested to see if his adjustment makes any difference to that. (it hasn't)

Luna was a mess.  Dr. Lana asked if she had been acting different than usual.  Less energy, sleeping more, grumpier......  We hadn't noticed anything really.  Luna's tail was out.  It was affecting a lot.  She was tight all over.  Luna doesn't particularly enjoy being adjusted, but today she was really making it obvious that things hurt.  I was controlling her head.  She was struggling, looking wild eyed and showing a lot of white, and licking her lips constantly.  But once it was all done she was right in there with the other two looking for her treat.  Jake is funny, once he is done, he stands and looks at the treat jar, then looks back at Dr. Lana, and then back at the treat jar, and so on.  Dr. Lana broke down and gave them all treats after each dog was finished, so they got more treats than normal this visit.  Jake and Calli love her, Luna not so much.  She said Luna should be good to go.  That is a relief, as she is entered in the BC/Yukon agility regionals in just over a week.

On the way home, since we had to pass it, we stopped and walked the dogs at the dyke.  A beautiful day, and the water was very high. 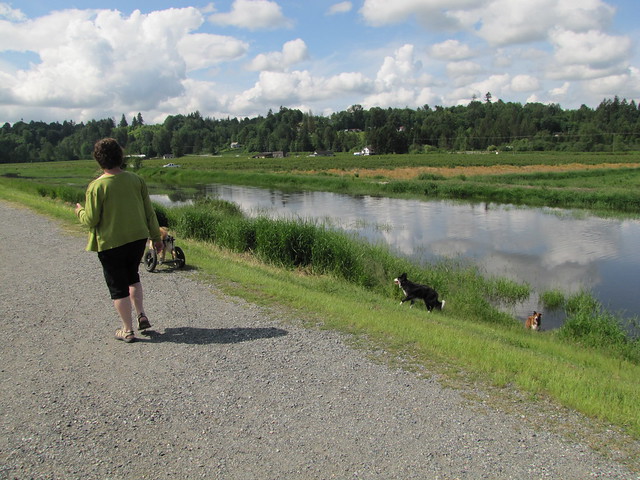 All the dogs got a swim.  We managed to find some piddly sticks for them to fetch. 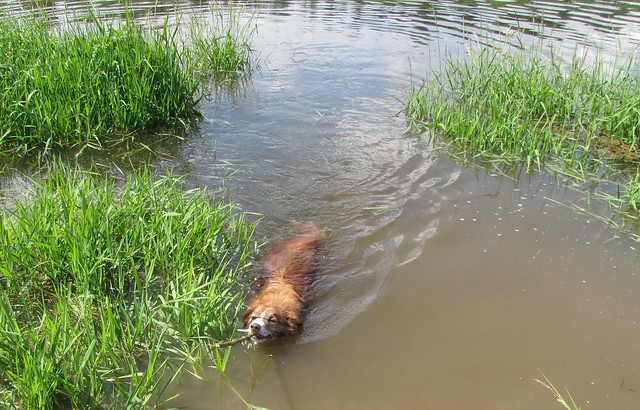 This kind of makes me think of a kid running with scissors.
Posted by Karen at 12:23 AM