I'm feeling pretty good about this running right now, after struggling with it a week or two ago.  Not that I'm finding it easier. No way. No sir. It's HARD. But.....I'm getting it done, and mentally feeling fantastic about that part.  On Sunday, Meredith and I ran what I consider the hardest training session.  We are into week 11 of  13 weeks of training.  Unfortunately Larry has had to drop out.  The first run of week 10, he pulled something in the back of his calf.  After a few days off he tried running again, and after a few minutes he was in pain.  At this point in the training you can't afford to take a couple of weeks off and expect to be able to run the 10K.  Walking it isn't an option for him.  So he's been doing a bit of bike riding to keep the fitness level up, and doing the same stretching afterwards to maintain the flexibility that he's gained.  We are hoping to keep on with some running after the race, running at a lower level and hopefully he'll be able to get back into that.  He might have been better off switching to the walk/run option at week seven, but you know that saying about hindsight.   We had all wanted to run together. 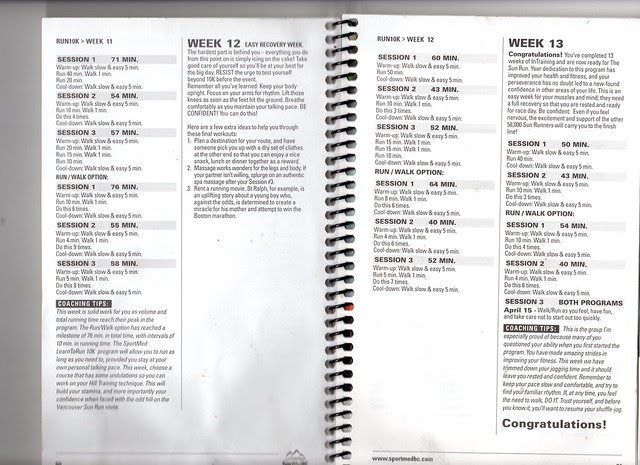 So anyway, back to our Easter Sunday run.  We started before 9, at my insistence.  I CAN. NOT. RUN. if I get too hot.  Since the weather over the whole Easter Weekend was as fantastic as it could possibly get (sunshine and temperatures of 20-22 degrees, high 60's to low 70's F), I needed to run before it got too warm.  We drove 15 minutes and were running on the Discovery Trail in Abbotsford.  The part we were on was mostly flat, although did get into some small ups and downs farther along.  We had a plan for the first part, but when we came out at Clearbrook road, we hadn't decided which way to head.  That's when I said, 'let's take that boardwalk, I've never been down it and would like to know where it goes'.  The board walk parallels the road for a while, and then heads into the trees.  We've driven past it a million times, but never been on it.  Eventually the flat part started to go up, and up, and did some switch backs, and up some more.  Our legs were dead but we slogged our way to the top.  Then it was all flat and ran along the back of some houses.  There is a large Asian population in that neighbourhood, and almost every house had a decent sized vegetable plot in the backyard.  We came out at a school and onto a road, and other than back tracking, we had one more monster hill to do.   We puffed our way to the top, and right at the top we ended our 40 minutes.  High Fives!  A minute of walking to catch our breath, and then off running again with some flat, a few small hills, more flat, and then a lot of downhill, and we finished off with walking on the flat.  According to Google there was 250' difference in elevation between where we had parked, which was the lowest point, and the top of the hill.  I was on a mental high all day after that one:)  And really the weather was perfect.  The sun was shining but the air was still cool and moving enough that I could feel the coolness against my skin as we ran.

Seven more training sessions and 2 1/2 weeks before the Sun Run.