Just wanted to remind you of that.  I've never found running easy, and I've never  liked it.  I do like that feeling of success, that 'yay, I did it' feeling after a difficult workout, but doing AND liking the workout are two different things.  Would running be my exercise method of choice? No way.  Give me the option of a brisk walk or a bike ride any day.   So why did I run?  Because it's there I guess.  The Sun Run that is.  Do I have a bucket list?  No, I don't, but if I did, this would have been on it.   So I've done it twice now.  Will I do it again.... probably.  Why?  Just to say I did.  Kind of makes you feel good.  Kind of like name dropping.  You happen to talk to someone, and just happen to mention that YOU ARE GOING IN THE SUN RUN.  Makes you feel like you are a bit special, are part of an elite group.  Maybe I'm a bit of a snob.

So yeah, Meredith and I survived.  It was raining this morning.  That hadn't really been part of my wardrobe plan.  I changed it up a bit.  It was cold too, and we have to do a lot of standing around before we actually get across the start line.  45,000+ people take an hour to all get across the line.  Luckily for us, we managed to feed into the back of an earlier group, as we gathered on the sidestreet because the actual starting street was full.  Which meant for less standing around.

Easing onto Georgia St. for the start 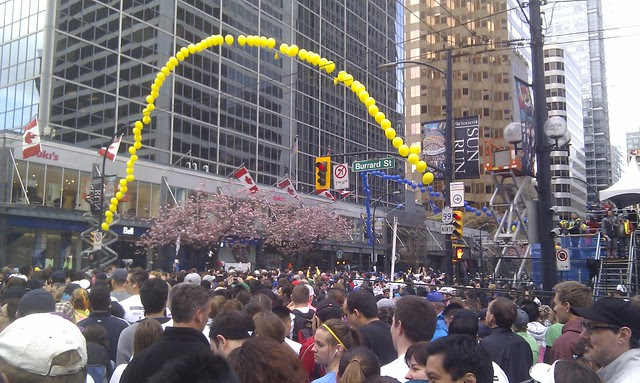 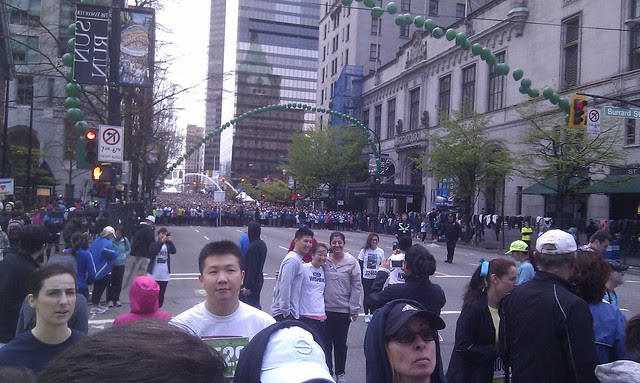 The actual race started, with the elite runners heading out first,  while we were still standing in the line up for the portapotties.  It was kind of nice to start with a faster group.  There seemed to be less people that we had to pass this year.  Well except for those annoying walkers that start way ahead of where they should, and then don't keep to the side and walk a few abreast and block the road.  Or the runners that are running, and then suddenly decide to walk when you are right behind them. By the time we hit the first kilometre, the sun was out and I had my long sleeved top tied around my waist.   We remembered a few things from the last year.  Stay to the middle of the road at the water stations, since we didn't use them.  Couldn't believe the people waiting to use the portapotties  about 1.5 km in.  We did manage to keep running the whole way.  About kilometer 7, my legs felt like they had 100 lb weights attached.  Meredith was struggling too.  She said later that if I had suggested walking, she would have jumped at it.  Things got a bit better and on the last half a kilometer on the downhill side of the Cambie Bridge we were able to make a feeble attempt at a sprint for the finish line.  Grabbed hands and ran across it together.  Our times were identical.  Felt sick and light headed at the end, so walked around a bit to recover and then did our stretches.  We went into the stadium for some free food and drink,  and managed to get together with two of my nieces that ran.  We all finished in times that were no more than four minutes apart. 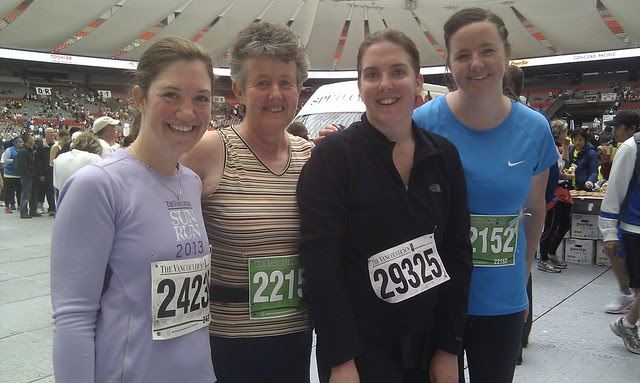 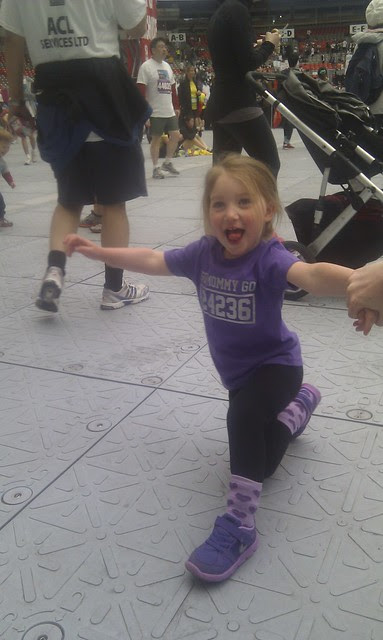 Meredith's and my time was 1 hr 2 mins 50 secs.  Nearly 4.5 minutes faster than I did it last year.  I was pretty pleased with that, and it was about 20 minutes faster for Meredith, who was hobbling along with plantar fasciitis the last time.  We started off slightly faster this year I think.  I had wanted to do that.  It's okay saying to start off slow, but you can never make that time up.  Maybe that's why our legs felt so dead at 7 K, who knows.  I know I didn't have the oomph at the end this year that I did last year.  I'll settle for the faster time though.  You know what I find the most amazing about all this though?  The fact that I CAN run for an hour, non stop.  I actually find that mind boggling.  Who'da thunk it?

There were a lot of blue and yellow ribbons in evidence, in support of Boston.  We had some pinned to our numbers.  Did we think about bombs.  Yeah:(  Meredith and I talked about it at the end.  If we were of a terrorist mentality, what were the places we would have picked to do the most damage.  There were a few 'good' choices.  Sad that the thought even crossed our minds.
Posted by Karen at 10:38 PM