The Old Ewe, who is the grand old lady of our three sheep flock, is about 15 years old, and looking her age.  Yesterday I noticed that she was not doing well at all, and Meredith said while that we were away, she looked depressed.  Not depressed because we were away, depressed as in not acting normal and looking, well, depressed, head hanging, not moving around much, not eating much.  This morning we were scrambling around to dash off to one of the pre-Christmas farmers markets at White Rock.  Larry came in to say that the old ewe did not look well at all.  She was laid out on her side in the barn and he couldn't get her to move.  It didn't surprise me at all, after seeing her yesterday I figured her time had come, and she would most likely be dead when we arrived back home this afternoon.  Sure, she's been here since birth, and I know her well, but she is a sheep and not a pet, and I can be a bit practical about that sort of thing.  In other words,  no heroic measures were going to be taken.

I was doing my usual post market Sunday , 'push her around the grocery store' visit with my mother.  We had two vehicles and Larry had headed home.  I received a text telling me to bring home molasses.  The Old Ewe was still alive, and she needed an energy boost.  After playing phone tag, I finally talked to Larry in person.  He said it was a mess at our place.  I asked him what he meant.  He said there were four dead chickens in the south field, and one badly injured one.  One hen from that field, and the rooster, where in the north field.  Another couple of hens were out on the driveway.  I drove home in the dark and pelting rain, and then climbed into some rain gear and we wandered around the field.  We found another dead hen, for a total of five.  The whole back half of one was all eaten.  The others appeared untouched, although they were rain drenched and it was hard to tell for sure.  No obvious wounds at least.  Tomorrow in the daylight we'll check the fence line for clues.  The death scene didn't fit any of these descriptions. 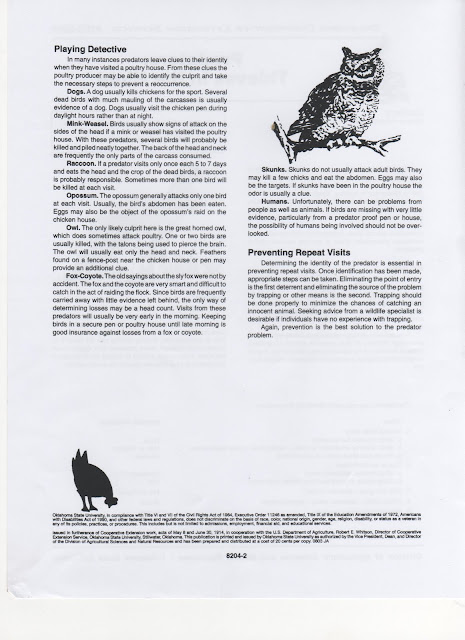 There were only 27 hens in that coop tonight.  It's been a while since we've counted them, and some of the older hens have dropped dead in the last while, but there's an awful lot of hens unaccounted for.
We are guessing that it is coyotes again.  Was there a whole pack in the field while everyone was gone for the day?  I feel bad that we didn't keep the chickens safe, and subjected them to the stress of whatever predator was after them.  It must have happened in the morning, as there were only 16 eggs in that coop when they were collected tonight, and there should have been twice that many. Quite a few hens didn't get a chance to lay today.  It's so bloody frustrating.  If it wasn't for the income the hens bring it, I'd just get right out of the egg business.  Four of the dead hens were the young ones that have only been laying a few months.  They have a black band around one leg.  The fifth body had no legs, but I think it might have been an older hen.  We'll have to pull the other fence back across and keep the hens in 'jail' (a smaller more confined area) again.  I'd just let them out a week or so ago, after the previous attack.

The Old Ewe looks like death warmed over, but she drank some warm molasses water, ate an apple, as well as a bunch of soaked in warm water soy hull pellets, and is munching on some hay.  I guess it's not quite her time yet.  Unfortunately some of the hens can't say that.
Posted by Karen at 12:15 AM