We have a seasonal creek in our back bush.  It dries up in the summer and then is wet through the rainy season and winter, which are the same thing really.   We cross it twice.  One crossing has a few culverts put in so we can drive across with the tractor, but the upstream one hasn't leant itself to culverts, as it is a wide shallow crossing where the trail is.  At times we've tried to make the crossing drier, but they were feeble attempts and didn't last long.
You may remember that I used to compete in dog agility with Jake and Luna, and for many years I was the equipment manager for our club.  At some point we were upgrading some equipment, and we ended up with two 12' long, 1' wide, plywood covered aluminum frames.  They were the up and down planks of the dogwalk, which had one plank leading up to a horizontal plank about 4.5' above the ground, and the third plank was the down ramp at the other end.  The planks we had were the up and down planks, and had little wood slats across them for grip.  Then it was determined that dogs were jamming their toes on the slats on the way down, and a better grippy rubber coating had been developed for the dogwalk, so our club replaced the whole thing and somehow we ended up storing the old planks in the rafters of the barn.
Okay, that was probably more info than you wanted, but I'm very good at making a short story into a long story.
At some point I decided to take the wood slats off, so that left bare wood.  One day I had a eureka moment and suggested we use the planks for a bridge across the creek.  But there was that bare wood, and that needed painting to protect it.  And months later Larry finally painted them and we set them up and they worked well.
This was definitely a rainy season kind of day! 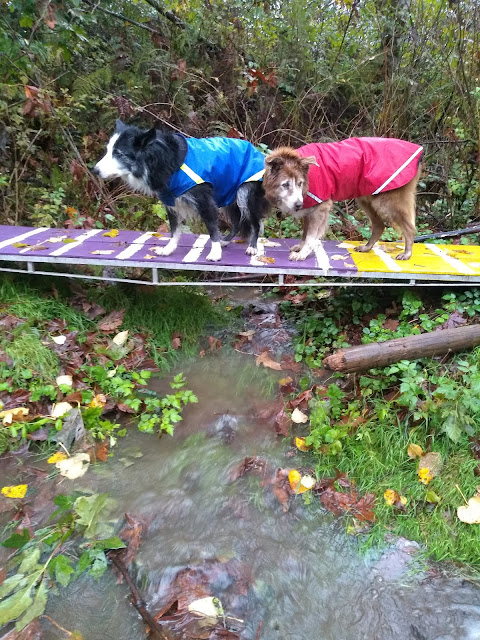 Since Jake is now well over 16, he certainly isn't the agility dog he once was.  He could still manage to do stairs with some assistance, but one day Larry joked that it sure would be nice if we had a ramp from the back door down to the patio, which currently are 9 steps apart.   And  I said, well, those dogwalk planks that we are using for a bridge would be great for that.  And Larry thought it was such a good idea and well worth trying, that he didn't waste any time putting it into action.
He decided he would pick up the planks the same way he had installed them.  I was thinking that it was a lot dryer when he installed them, we had had an awful lot of rain since then. But I thought I wouldn't say anything, I do tend to nag, and sometimes I just try to keep my mouth shut.  I regretted that!  When he had taken the planks out there, there was no bucket on the tractor.  Now the bucket was on, which makes the tractor that much longer, and more difficult to maneuver in tight places.  So he went round the loop of the trail, loaded up the planks and was driving out across the creek.  I didn't actually think to take any pictures while this was all happening, and just took these few here when it was over.
See that tree trunk on the right.  He had to avoid hitting that with the tractor bucket. 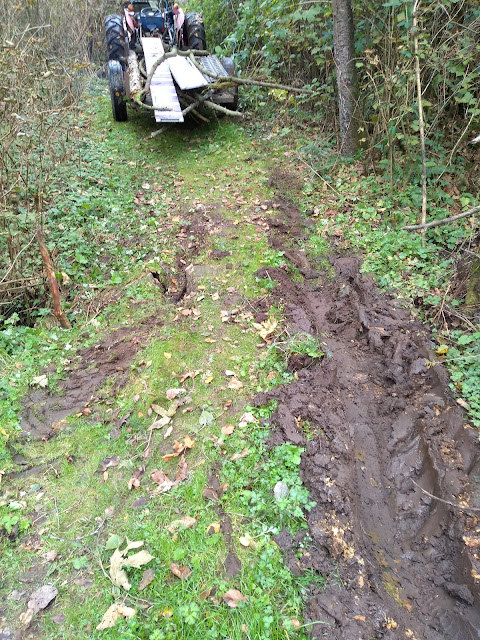 And see that hole there on the left where the culvert is falling into the creek?  He had to avoid that too.  It was pretty mucky on the right side too.  Too long of a vehicle, too many things to avoid, so the front left wheel ended up in that gap between culverts.  The tractor doesn't have four wheel drive, so it was stuck. 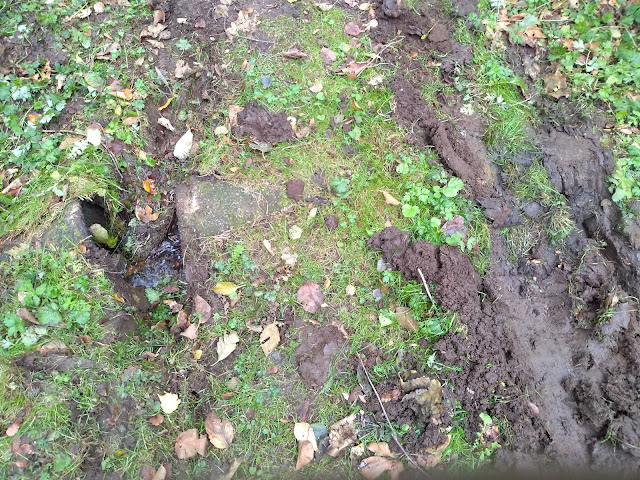 Larry walked back to the house, got the truck, put some weight in the back and brought out some equipment.  He backed into the trail, the idea being to attach a come-along to the tractor and the trailer hitch on the truck, and try winch it out of the hole.  I was watching the passenger side of the truck as he backed it in, and he was supposed to be watching his side, but ended up putting the back wheel off the trail, and now the truck was stuck! No four wheel drive on the truck either.  So we got the come-along attached to the front of the truck and a convenient tree and I started cranking the lever as he gave the truck a bit of gas.  He had not realized that he had brought the wrong come-along though.  One side of the drum had corroded away.  I had cranked it and the cable slipped off the drum and got stuck down the side and there was no cranking it tighter or getting it to loosen off.  At this point we are starting to think about embarrassing ourselves and going to a neighbour  and asking for help.   Sometimes you just feel so dumb! 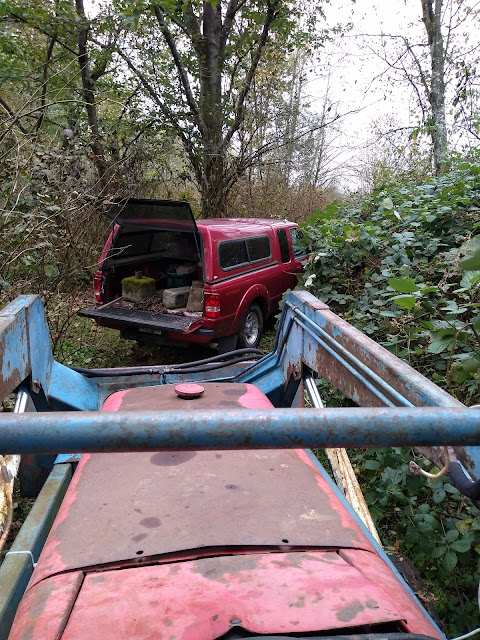 See those things on the back of the trailer with the holes?  They are called sand ladders and you can put them down to drive over in soft ground.  So we started digging in front of the back wheels of the truck and managed to get the sand ladders under the tires enough for them to grab and move ahead.  Thank goodness, one vehicle unstuck! 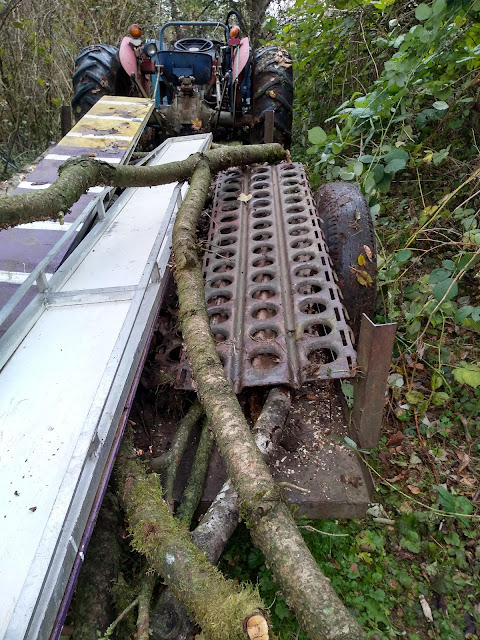 So then I suggested that we use the bucket of the tractor to help us.  You tip the bucket down and lower it to the ground and keep pushing on the lever.  Since the bucket can't go down any more, something has to give and the front of the tractor lifts up.  So with the front wheels of the tractor now off the ground, we where able to span that gap in the culverts with one of the sand ladders, and put the other one under the right wheel, and when the wheels where back on the ground the tractor moved ahead and all was well!
Well what a relief!  We had a good laugh at ourselves and felt good we didn't have to call on a neighbour.
A lesson learned? One can only hope. 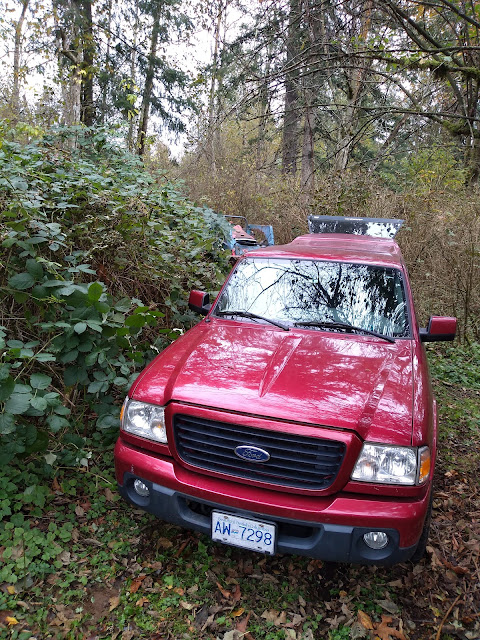 So here's the planks back at the house.  They are a success!  We have wire on the the other side now at the bottom so Jake can't fall off the side.  We took those rubber mats off because they are deadly if there is a bit of frost, and  bought a couple of rolls of that nubbly rubber shelf liner stuff from the dollar store and stapled that down.  It is better in the frost, but not perfect, so we have to check when we have had a clear night. 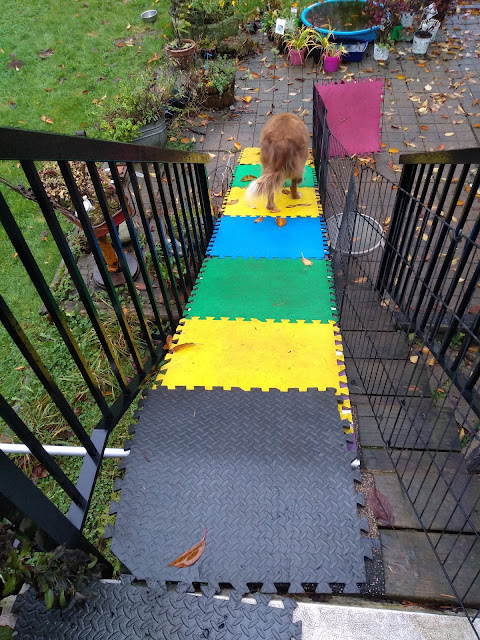 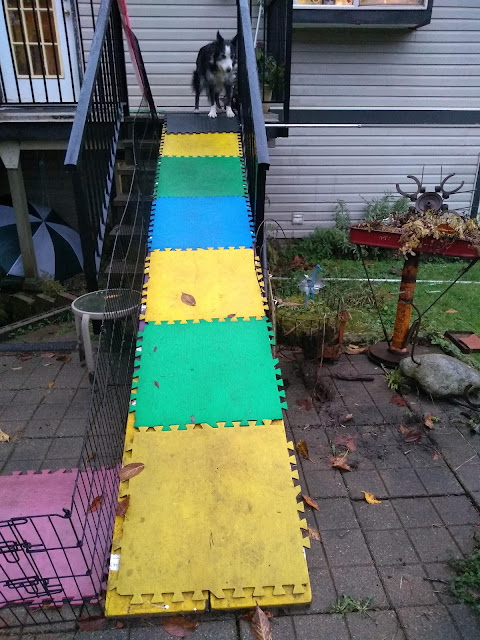 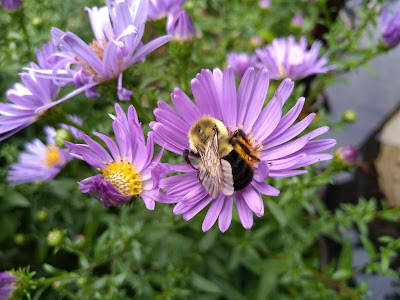