A month or two ago Meredith acquired a kayak, a real kayak.  No money was exchanged, but a few hours of work and a lot of good will made the kayak hers.  Since it's 14' length was way too much to fit in the storage locker of her condo, it's snuggled up here in the barn/shop with our two.  She was wanting company on her first trip in the kayak, so she asked us if we wanted to go on Victoria Day (Monday).  We said sure and we had some discussion about where to go, but with it being a long weekend and a lot of people out camping and places being busy, and the water levels of the lakes and rivers being high, we couldn't decide.  I came up with the Nicomekl river.  About a 40 minute drive, and not a swimming or great boating spot, which meant not too many boats or bodies in the water, so that is where we ended up.

We put the kayaks in at Ward's Marina, which is part of Elgin Heritage Park, home of the historic Stewart Farm. Ward's Marina is the home of the Mud Bay Yacht Club, and is where my dad used to moor his 20' sailboat.  My Dad passed away 31 years ago on that sailboat out in Mud Bay.

Anyway, I sort of thought of all this while we were there, but they were just memories and I didn't feel too emotional.

Now there should have been pictures of this first bit, but alas, there aren't.  We unloaded the kayaks and Larry went to move the truck, so Meredith and I carried the two smaller ones down the concrete boat ramp.  The tide was way out, the river at this point is very close to the ocean, so is greatly affected by the tides.  The concrete ended, and it was mud....so off to the side was more mud and lots of oyster shells or something else maybe, but I seemed to think the ground would be firmer there, so I  said I would check it out.  Ha ha, I instantly sank to my ankles in goop, so glopped my way out of the shoe sucking stuff.  In the meantime, a couple of other kayaks had pulled up to the dock, and were unloading there.  Well duh, why hadn't we realized that was the way to go.  Another guy was pushing a wheel barrow up the ramp from the dock and had a smirk on his face, probably silently laughing at me the idiot prancing around the muck.   We hadn't boarded the kayaks from a dock before so we were hoping the other people would leave in case one us made a fool of ourselves and tipped our kayak.  Fortunately, it all went okay, maybe some rocking kayaks, but kayaks and paddlers all remained the right way up.

We set off upriver and came to a bay with lots of boats moored.  After my dad died, Larry and one of his brothers bought the sailboat from my mum.  The frugal brother decided that he was not paying a monthly rent at the dock, he was going to put in a mooring in the bay where it was a free for all.  That's probably a whole chapter in itself, the floating of some massive thing out there and then sinking it.  I think the first one started to drag, so they had to do it again.  Anyway for the rest of it's time in our family's possession, the sailboat was moored in that bay.
When we paddled through there it was like the marine version of a homeless camp.  Sure there were some decent looking boats, but other moorings had all sorts of oddball things tied up and floating next to some sort of boat.  Things like those white plastic clamshell car top carriers.  Anyway, it was interesting to paddle by, to say the least! 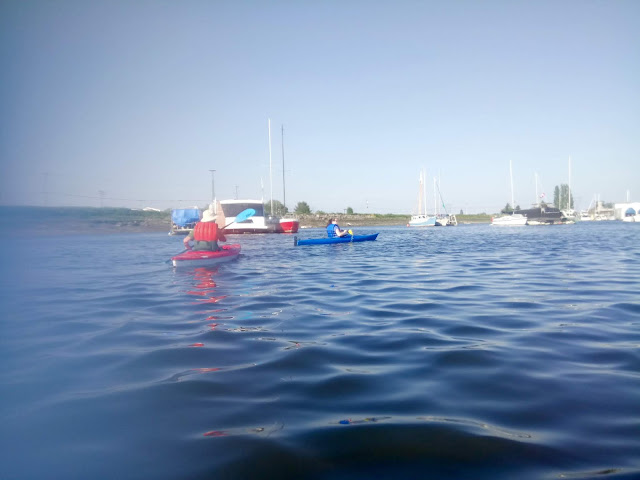 I had my phone in one of those waterproof bags, hung around my neck, and took pictures from there. At first the edge of the bag was covering part of the lens, so those pictures were garbage.  It was hard to see the phone and just very awkward, so I am going to look for a cheap point and shoot and use that.

We kept going upriver and went past some expensive houses with expensive boat houses and expensive boats.  The property in the background here has a windmill. I've actually been to it once. 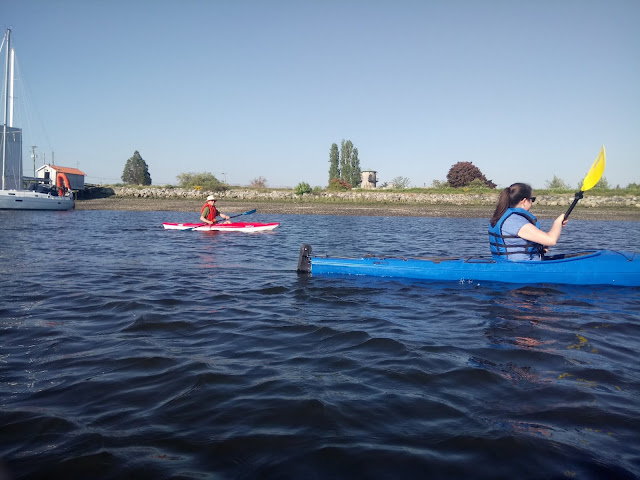 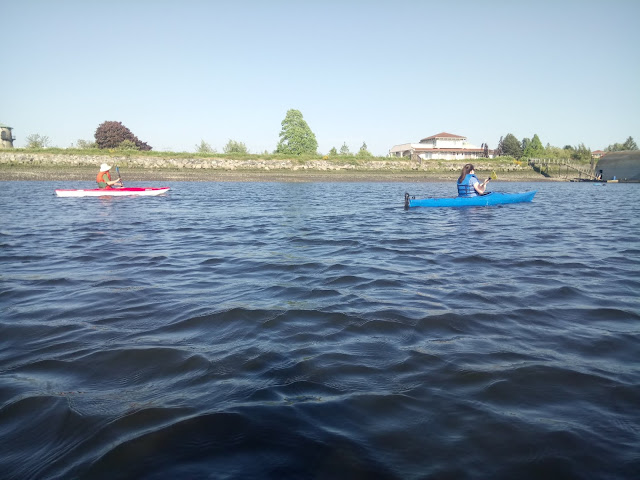 I took this picture because David lived at this property for a semester while he was going to UBC (University of British Columbia)  It belonged to a lady he knew in the horse world, and made his commute to university half of what it would have been from home. 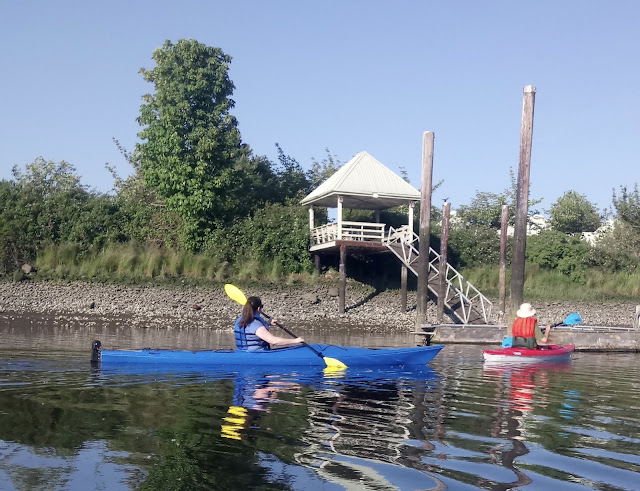 At this point we had reached the dam on the river and have turned back downstream.  The tide was coming in so the paddling wasn't any easier.  That black blob on the sand bar was a heron just about to take flight. 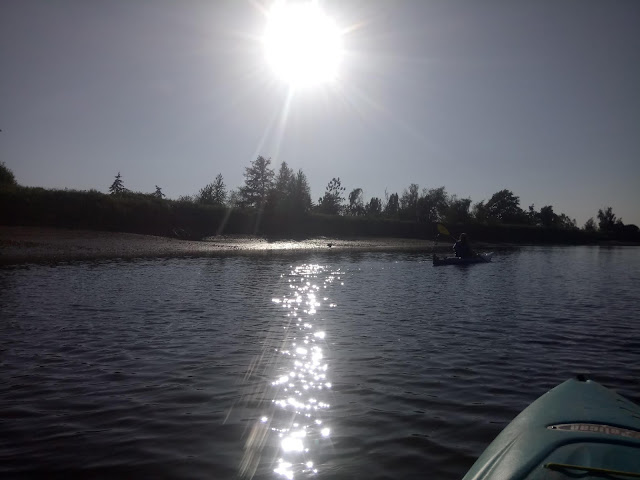 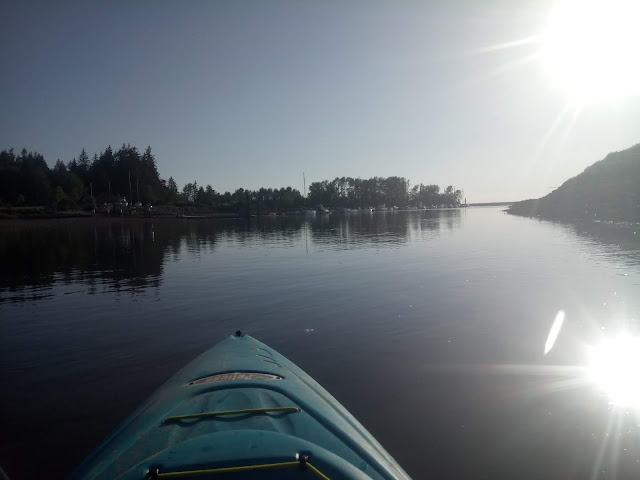 Larry had had enough, but Meredith and I paddled downriver to the next bend. 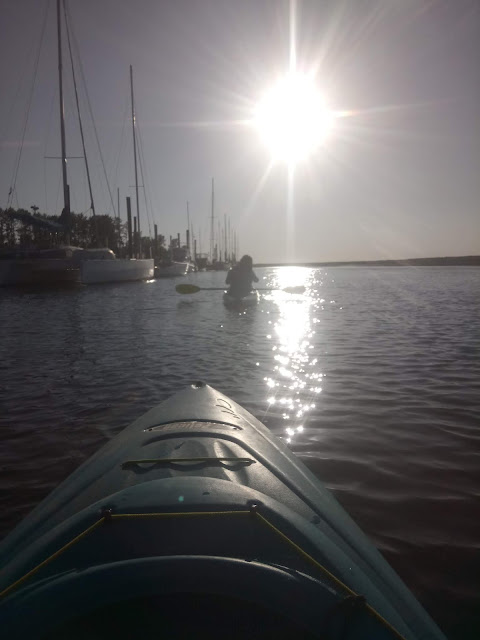 She almost looks like she is levitating in this one! 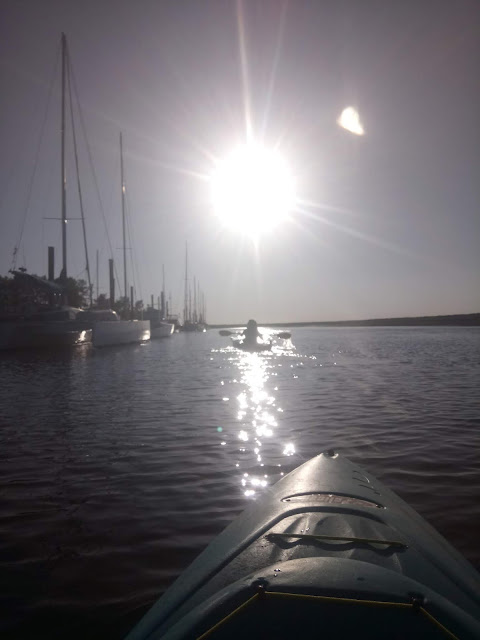 One of the boats moored at the marina. 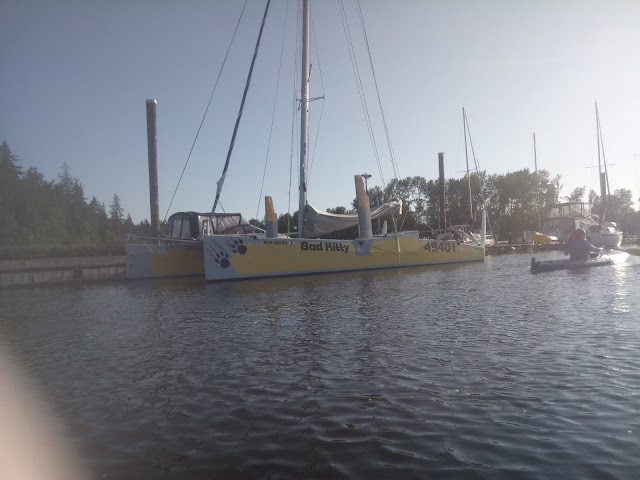 I took a photo of the kayaks in the back of the truck when we got home, so we could remember how we had strapped them in, which worked quite well. 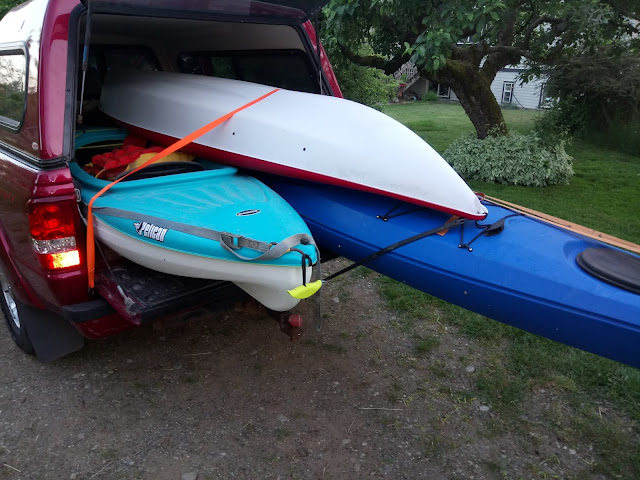 Today I decided to look up some photos that I could remember.
So this is Meredith in 1986, in my Dad's sailboat, on the same river, with some young guy, who the heck is he, oh, that must be Larry! 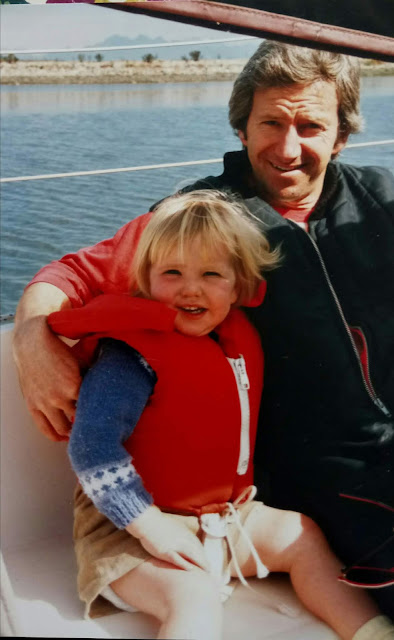 And then were more pictures when Larry and my dad took a trip to Saturna Island.  Here they are heading down the river to the ocean. 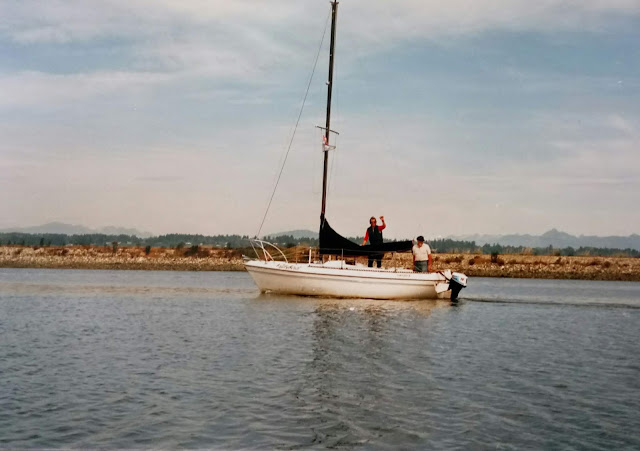 My mum and Meredith and I took the ferry over to Saturna Island and joined them for an afternoon of sailing. 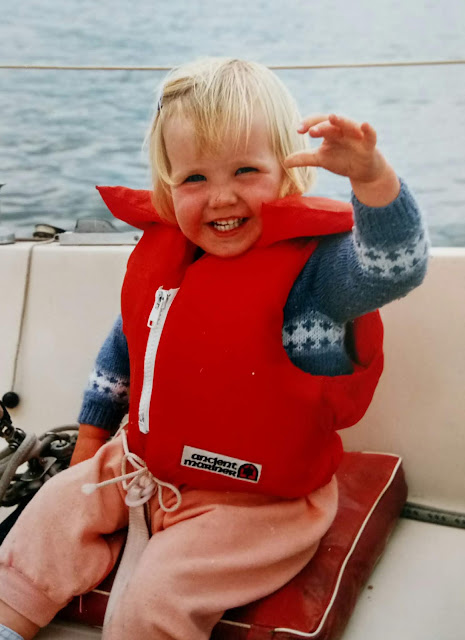 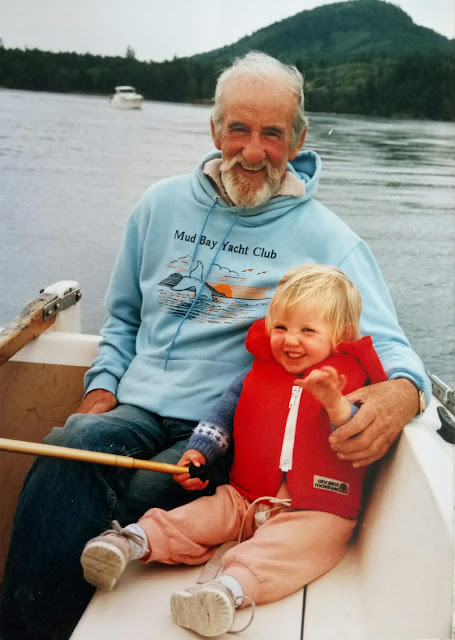 I have to admit I did get emotional looking at these pictures.  My dad loved kids, and Meredith was the only one of his 6 grandchildren that he got to meet.  He passed away a few short months after this photo was taken, doing what he loved. 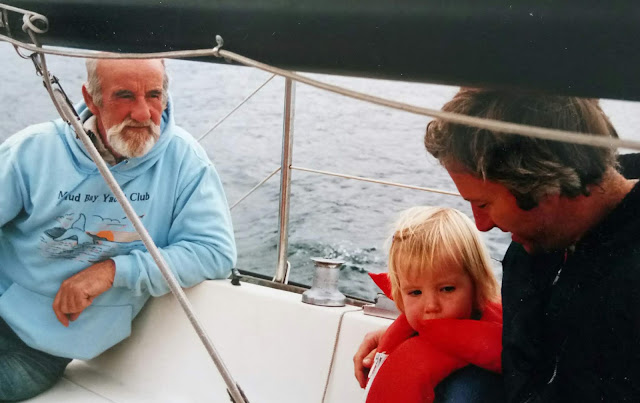