I think I post about this every year, so it is a story you have heard before, but it cracks me up every. single. time. So for my sake you have to read it once again (or not).

Every year when we buy new pullets (young hens just about ready to lay), I put an order in for the next year, March or April I say.  Most years I never get a phone call back from them, and because it is now my responsibility to call them, like many things, I put it off.  Anyway, I finally made the call near the end of April and was told it would be very soon, she would give me a call back, which she did in a week or two, and last Wednesday was declared chicken day.  Because we had lots of customers who were able to take care of all the eggs during the winter, I said that we would put the new hens in the old coop, which has been empty since the beginning of last year.  We put a temporary fence up so that they could have a grassy area to wander.  Once they got laying I would get rid of the oldest flock, and the new hens would fill their spot.  The old coop had some leaks in the roof, we had a bit of discussion on how to fix that, but the decision was made for us when I noticed a robin's nest built over the window of the coop, under the protection of an overhanging bit of tarp.  Every time we went close, the mother flew off, so we had to figure out how to disturb her the least amount. I did have a quick peak and saw eggs, so knew she needed to be on that nest to keep the eggs warm.  So our quick roof fix was to take a piece of that same plastic I used to repair the greenhouse, and cut it to length.  The width was enough to go from the bottom edge of one side of the roof, over the peak and to the bottom edge of the other side.  We got it up there, then a breeze picked up, so we had to get it up there again, but it didn't take long and we got some staples in along the edge and it was good. 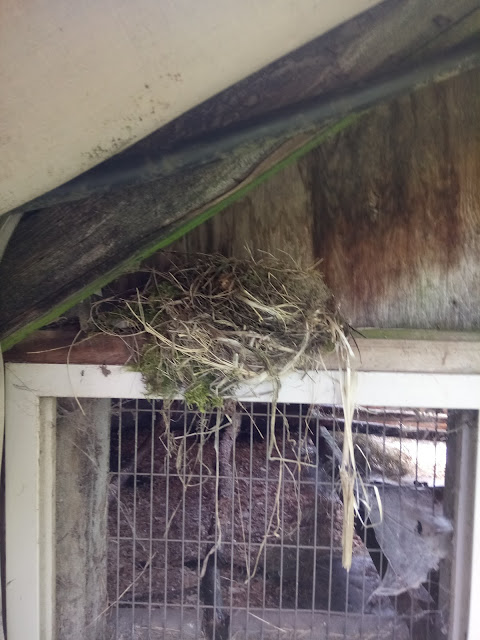 I was the last person to pick up their pullets that Wednesday afternoon, (hey, might as well let the hatchery feed them as long as possible!).  We used to take cages but now we empty out the back of the truck and throw a bit of hay in and the pullets are all put in there.  It easier all round as far as I am concerned.

I pulled up to the gate when I get home, Jake was laid on the driveway, and then Luna appeared and ran down and then stopped, head in the air, sniff, sniff, sniff, I smell chickens!
Now generally, she isn't really that interested in the chickens.  In her younger days she would follow one around if  it got out into the back yard.  She loves to go with me to the south coop, which is off the ground, and lays underneath it while I do what ever I am doing there, but generally she just ignores them now.

The camera doesn't capture the intensity, she really is like a coiled spring here, the excitement, oh the excitement....chickens in a truck!! 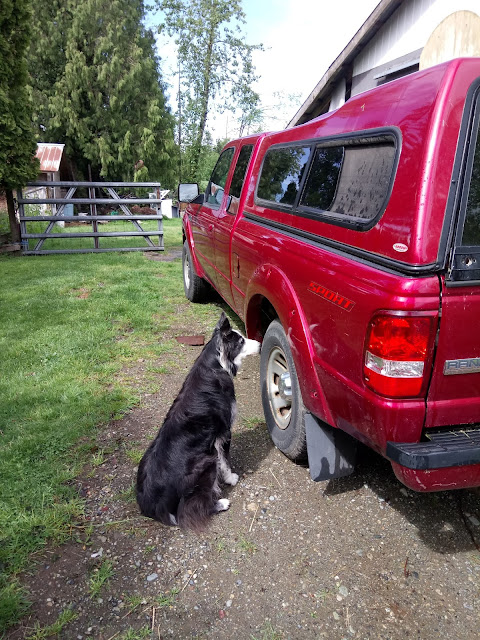 Oh, chickens in a truck, moving around in there!!
Does this photo make my butt look big?
Yes it does, but your butt is not big at all. 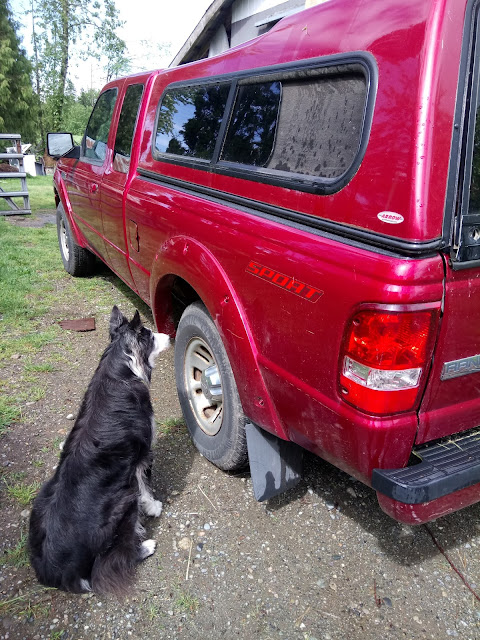 We backed the truck up to the coop door, we could get it close but there was still a bit of a gap with the tailgate down.  The chickens don't want to leave the truck, so that involves me climbing in there, hoping I don't put my knee(s) on a nice fresh poop, and using my arms to sweep groups out.  Some cooperate and jump to the coop, some do everything in their power to stay in the truck.  Luna sat in the gap between the tailgate and coop, and I had to tell her to lay down, which she did, and then she had chickens fall on her as some didn't quite make the leap from truck to coop.  Did she care or move, nope, she was such a good girl.

I let her go into the coop after, and here she is looking as border collieish as she ever does. 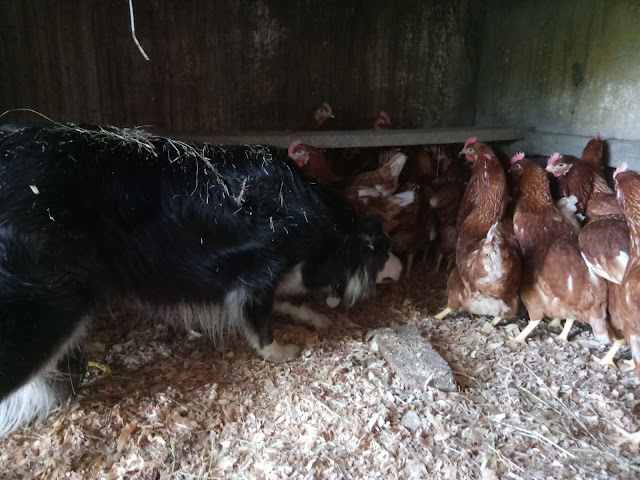 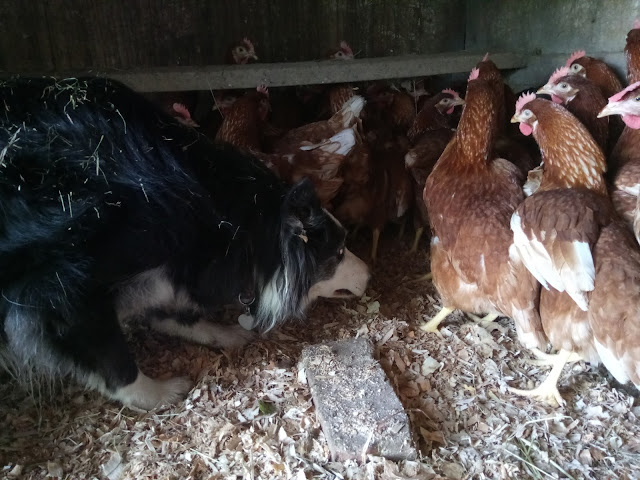 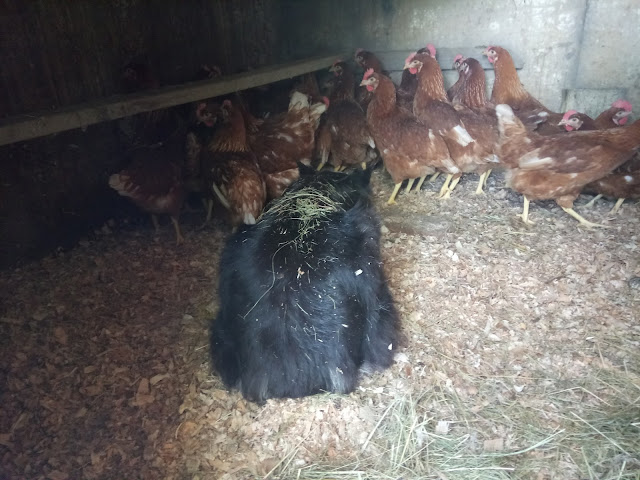 I got a peek in the nest while we were there.  One had hatched the day before, and now there were one or two more!! 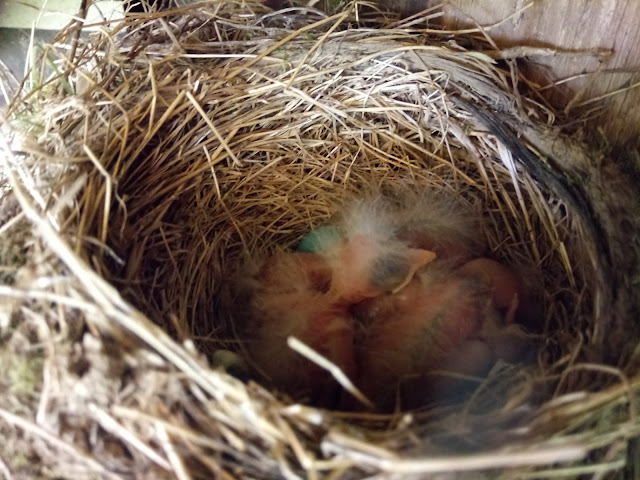 Ramona is giving me a reminder that shearing time is coming up. 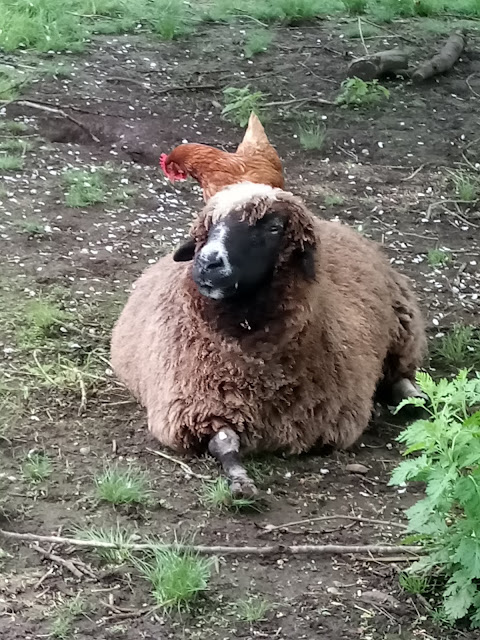 And a couple of days later there were definitely three! 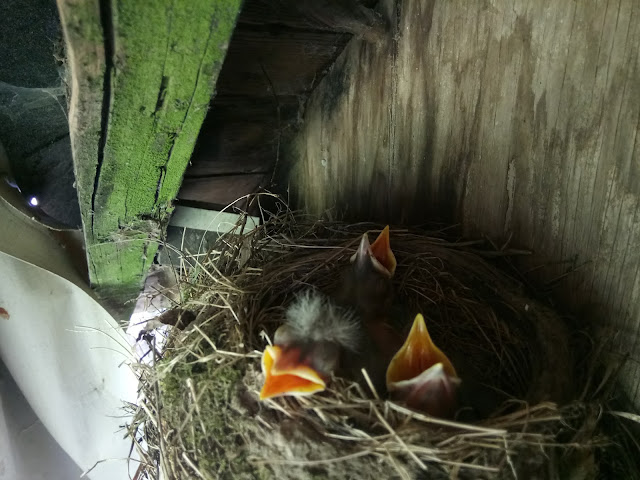 The pullets had already started to lay, and Thursday we got fifteen little eggs.  On Sunday we were up to twenty five,  so that is 50%! I think we might donate these little eggs to the food bank.  The yolks are quite pale compared to our other eggs.  Maybe another week of eating grass will colour them up a  bit.