Kind of a funny title for this time of the year, but the last part finally got finished the other day, and I wanted to share the transformation.

When Meredith bought her condo, I seemed to be involved in the furniture she acquired.  I either found it for her, did a makeover, helped her do a make over, was there when she bought it at a thrift store or garage sale, you get the idea.  I always felt that she needed a little counter height table in her kitchen alcove.  She had a little tea cart in there that was originally my mum's, and had a dining  table and chairs from Larry's mum on the other side of the dividing wall.  The tea cart wasn't the right scale,  but at least it was a something  that you could store a few things in or put something down on.

About a month or so before  Christmas the table below, a 'bar' table they called it, came up on Bidding Wars.  I sent this picture to Meredith, fully expecting like everything else that I sent her, she would say 'thanks, but no thanks'.
Well she proved me wrong, and said she was interested, maybe because I had added in that I would do a makeover on it for her as a Christmas present.  So I managed to be the winning bidder of the set at $15. 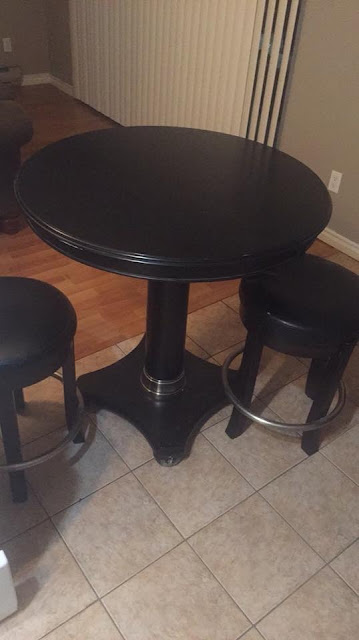 The table how I pictured it from the photo, size wise, and the size it really was when we went to pick it up, were quite different.

Anyway,  took it home, took it apart, and started sanding and painting.  It dominated the utility room for quite a while. 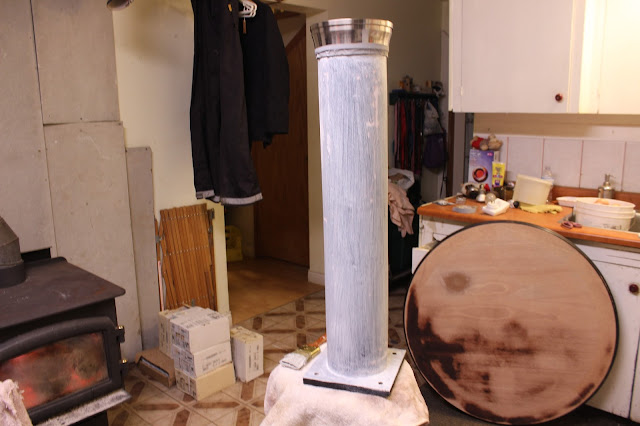 The wood stove made made a handy horizontal surface for the stool legs.  Obviously it wasn't in use at this moment! 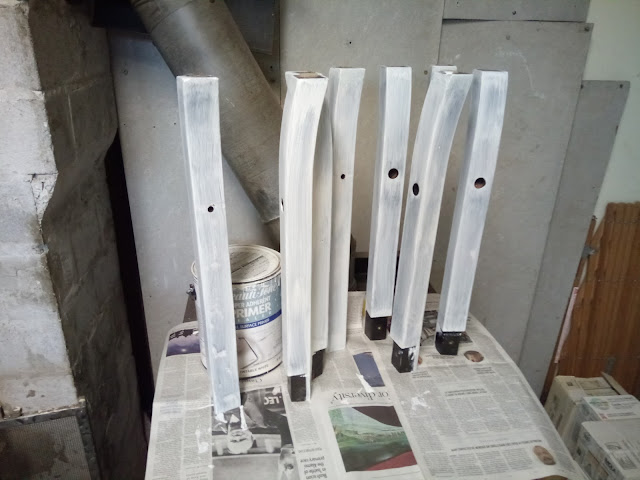 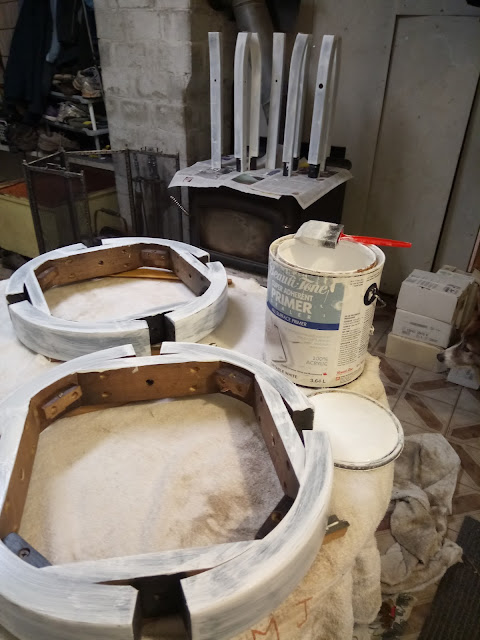 I got excited when I started sanding the top and a nice wood grain appeared.  I texted Meredith and said that maybe I should just stain the top.  So I kept sanding and there were some flecks of the dark original paint buried in the wood grain.  I sanded more and then the wood grain disappeared.  See that    medium brown round area on the left?  The wood grain veneer was so microscopically thin that I had sanded it away!  So back to the painting plan. 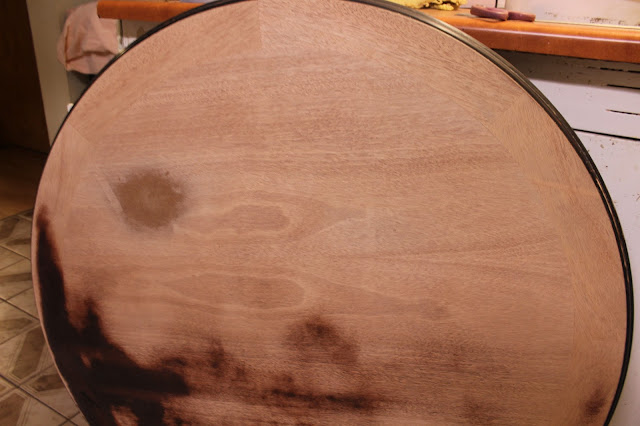 My mistake was not to continue sanding all of the dark paint off, as it took quite a few layers of the white to give an even finish to the table top 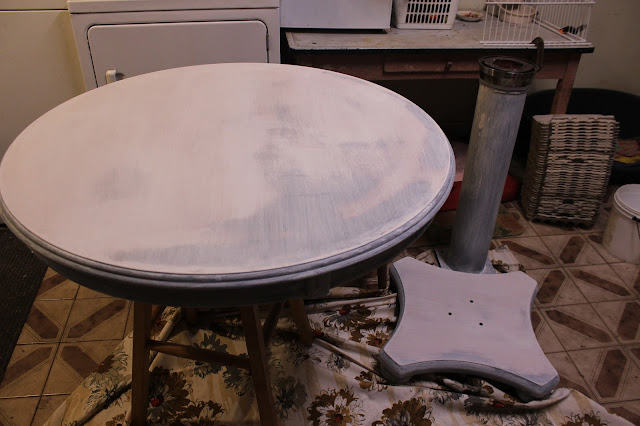 The stools were covered in vinyl, and it was ripping around the edges.  I came up with various options for reupholstering the stool tops.  I even found these extra large linen cushion covers at the thrift store.  They were a natural off white, and had a large pattern embroidered on them in a shimmery bluey grey colour.  One cushion had the embroidery on both sides, so I just bought the one for 75 cents.  When I got it home I was so taken with it, and my mind got working, and I thought it would look great on the seats of Meredith's dining room chairs.  Many years ago I had recovered them for my mother-in-law in a 'fashionable' (at the time) blue green with coloured flecks.  There had been two cushions at the thrift store, and luckily when I went back the next day, the other cushion was still there.  I gathered together a few options that I had for recovering the stools, and showed them to Meredith the next time she was over.  She picked a blue and white striped denim, like the overalls that guys working on the steam trains are pictured in.

This was Christmas morning.  Doesn't Meredith look so excited?  Haha, not! 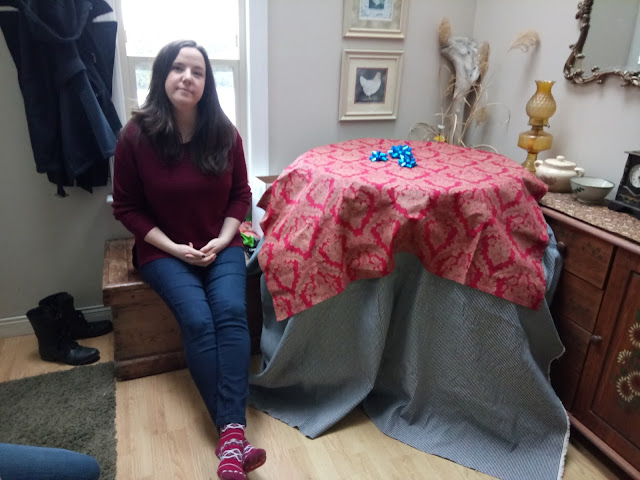 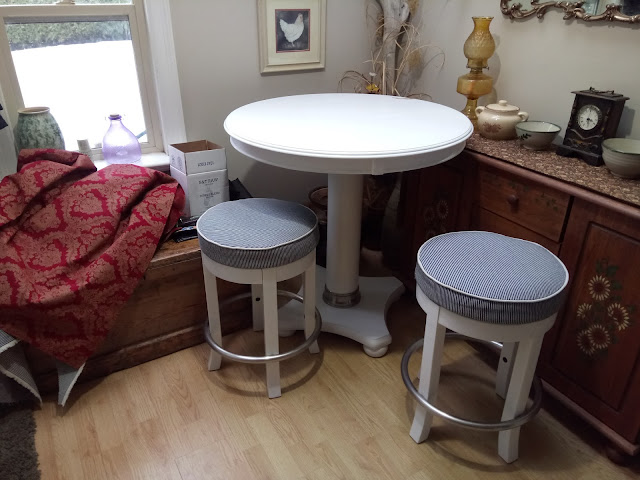 It's funny how the camera can't really 'read' the stripes, but they are all vertical around the edge of the seat, well matched at the seam, so that you can't even notice it, and run in a straight line across the top.  The 'piece de resistance' was the piping that I took off the big cushions and used between the sides and the top.  I loved how it turned out.


In postion at Meredith's. 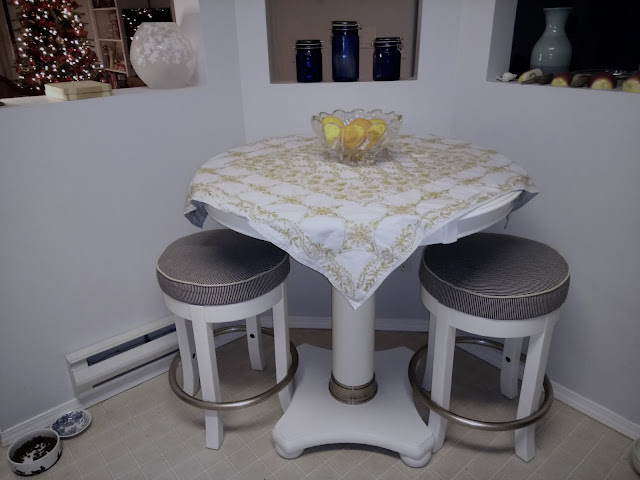 Meredith went to visit David and Melissa in Edmonton this last weekend, so we made daily visits to her place to feed her cat. We took the seats off the chairs, brought them home, and I stapled the cushion sides on them.  I've got to say I really loved how they turned out. 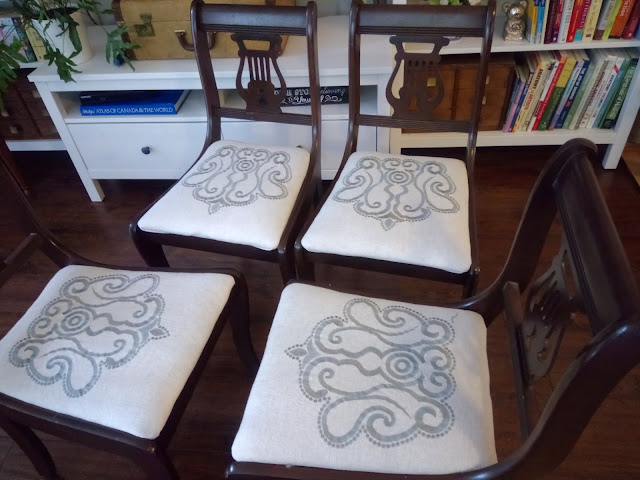 The seats aren't as white as they appear, and the design is a bit more blue.  They don't get used much at all, so they should stay decent looking for a long while.
The table and chairs are a Duncan Phyfe style, a copy, not an antique.
I think Toast the cat approves too. 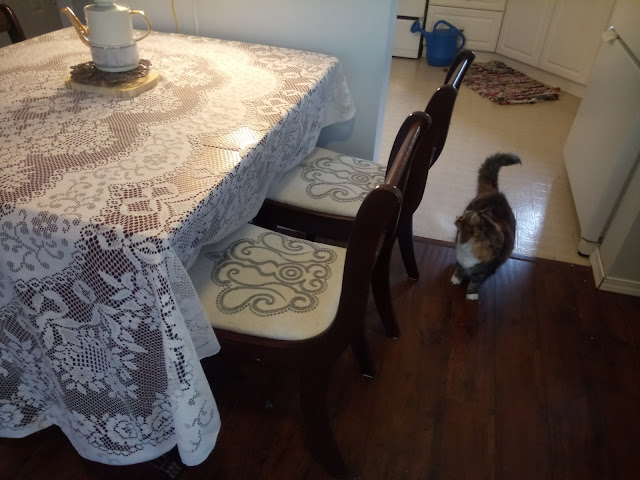