Kind of funny, we would mention to people that we were going away.  They'd usually ask if we were going somewhere warm.  And we'd say no, probably going somewhere colder, but one heck of a lot drier.  It's rained every day for the last three weeks here.  We went to the Oliver cottage for 9 nights.  It rained a bit there, and three mornings there was a bit of fresh snow on the ground, but that moisture amounted to nothing close to the 5" of rain that Abbotsford got while we were away. We were glad to  miss it.  I was getting messages from the house sitter 'there's sooo much rain', 'I'm sick of the rain'....
We do a lot of walking in Oliver, to keep the dogs happy mostly, but it's good for us too, and we do enjoy it.  Most mornings we'd pick a section of dyke to walk along, that we'd have to drive to.  In the afternoons or evening we'd walk out from the house.  If it was dark we'd do our usual route up the hill and around the high school.  The deer venture into town in the winter evenings, we've got some piles of deer poop in the back yard or just behind the back fence.  We've never seen them but this particular night there were two on the bank just down the road from us. 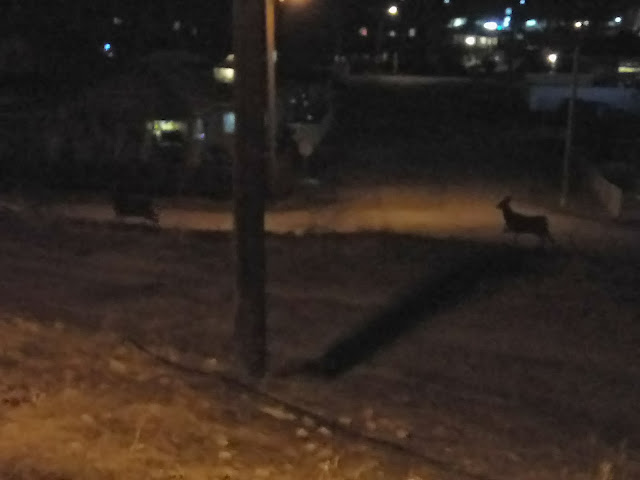 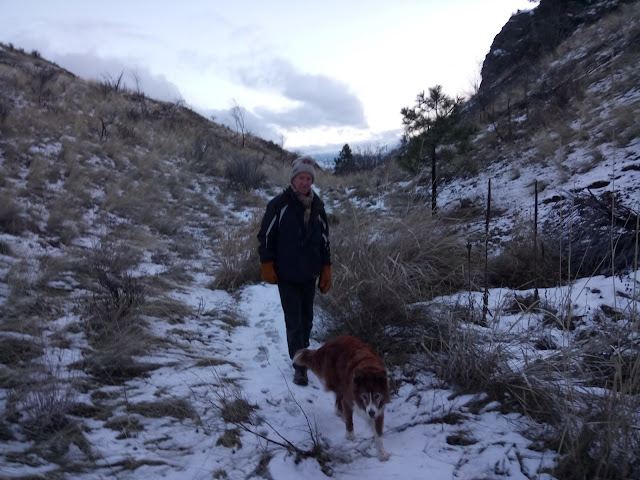 And then up over the top and back down again.  Kind of neat with the moon rising. It wasn't quite as dark out as it looks 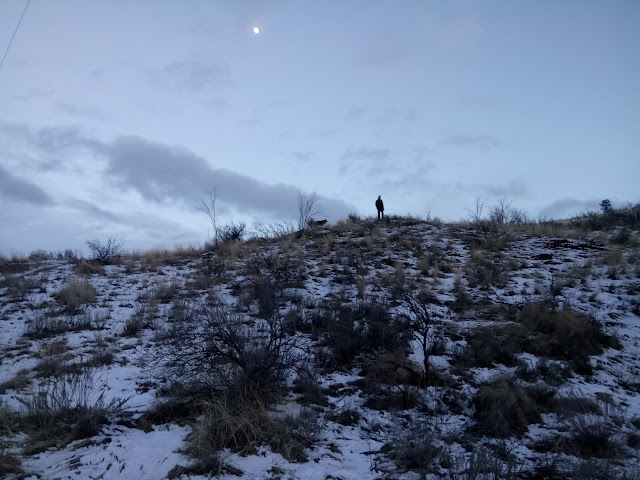 One morning we thought that someone had been chain sawing trees that had fallen over the trail. 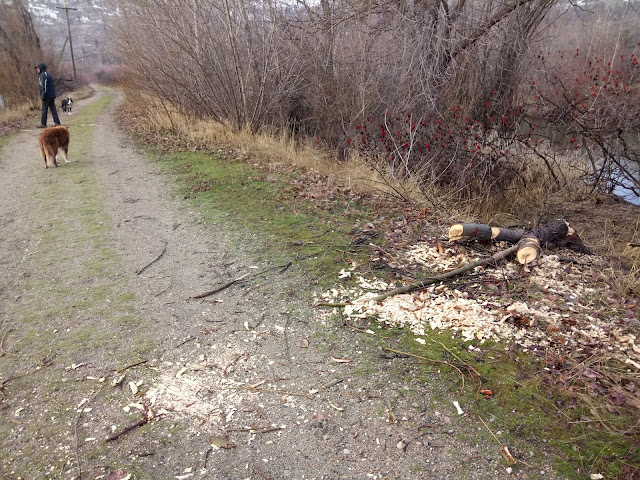 The only saw that spits out chunks that size has beaver teeth!


And then a bit further along we came across this tree.  Lucky for the beaver it had fallen right to the river, and they had been peeling bark off the end in the water. It's really incredible what they can do with those teeth.  The picture doesn't show how massive that tree was.
Does the beaver shout 'timber!' as the tree goes down? Do any beavers ever get crushed by falling trees? Do the beavers know which way the tree is going to go?  They aren't the fastest of creatures on land after all..... 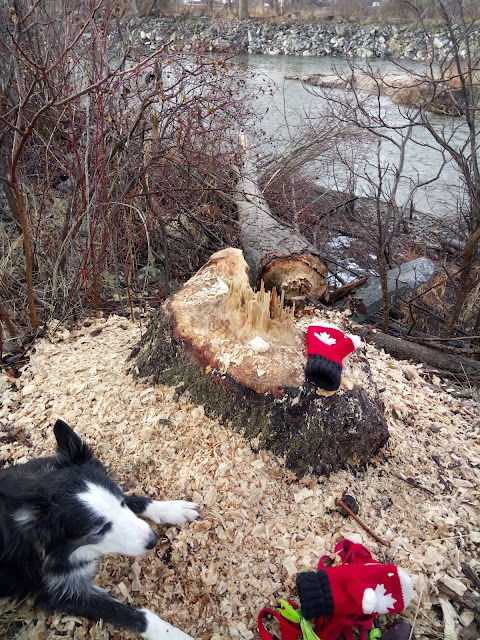 Further down the trail we checked on the beaver tree from the last time we were there.  It's still there, but it looked like there was a bit of fresh chewing. 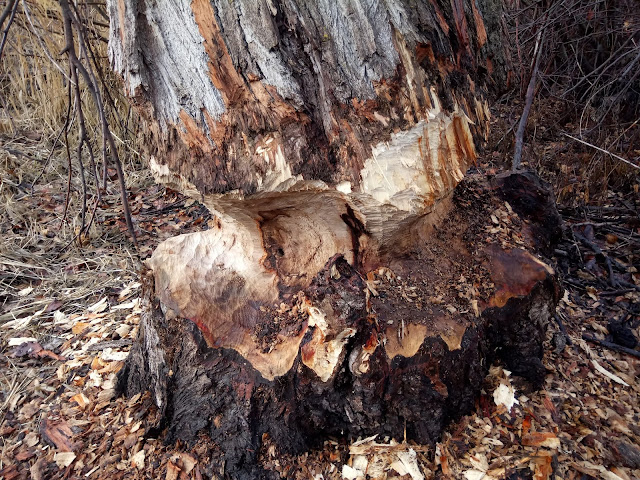 We had one sunny day while we were there.  This is the only picture I took that day!
I'm so glad the house faces south.  On a sunny winter's day the sun streams in the living room, and usually warms it up enough the the furnace is redundant for a few hours. Luna often sleeps with her tongue stuck out a bit.  Her front teeth are worn down to nubs, so not much to keep the tongue in place.  I think it is from pushing the basket ball around, can't think of any other reason. 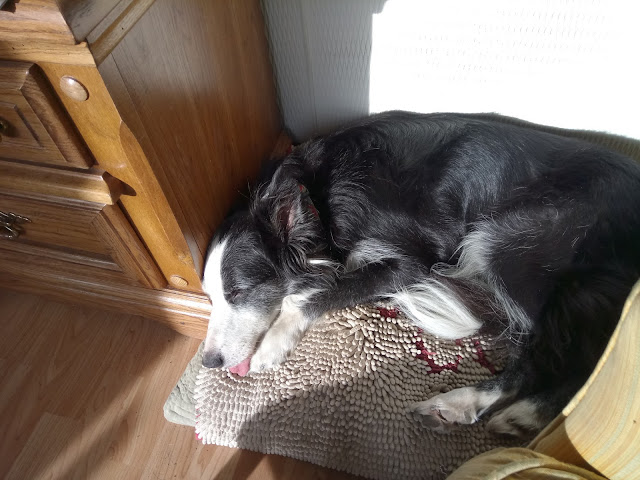 Feb 1 was Larry's 70th birthday.  The dogs got a good walk in the morning. So did Larry! 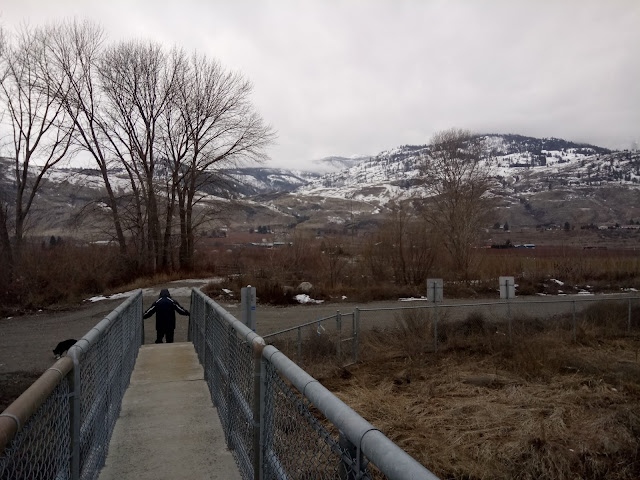 A dull day, but still scenic 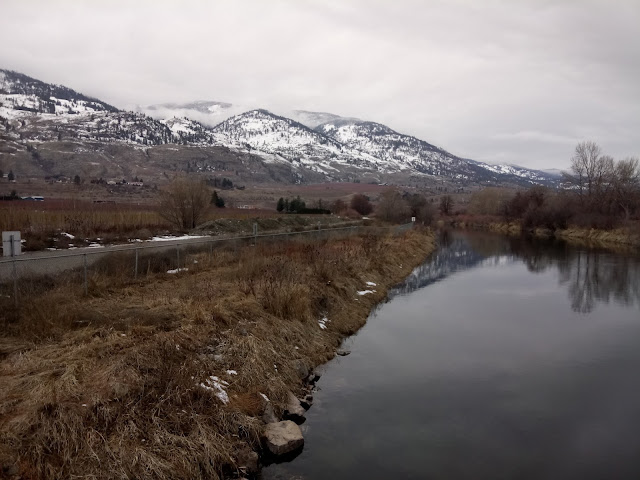 I follow the Oliver Chronicle (which is the local newspaper) on Facebook.  They had a giveaway of two free tickets to a big curling tournament in Penticton, half an hour away.  I happened to win them (I do wonder if the mention of it being Larry's 70th birthday had any bearing on that)😆, but I think only eight people actually made the required comment to enter.  I guess the odds of winning were decent!
I knew Larry had curled a bit when he was young and agile, but I didn't know he had curled for about eight years, and that wasn't counting the years before that that he would go and watch his dad curl.  I can't believe we actually sat there for 3 hours.  That was the first time seeing curling live for me.  It was mostly pretty interesting, and also interesting listening to comments from people around us.  There was an older lady sat behind us who was a curling whiz, so it was fascinating to listen to her telling the younger guy who had brought her, about the different competitors and the rules and stuff. 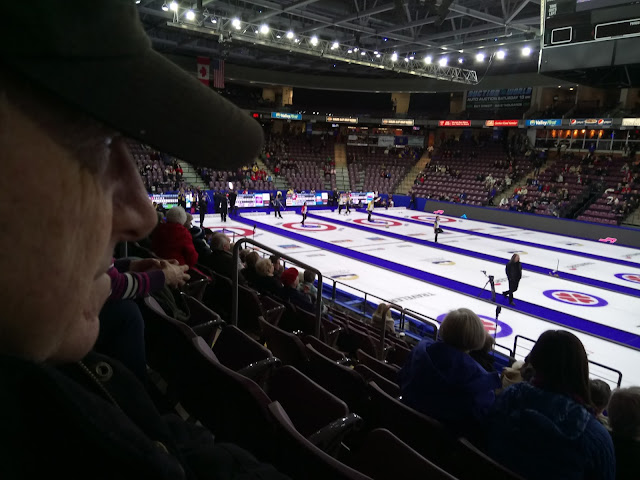 Afterwards we went for a meal out.  Which is actually the first time we've gone for a proper meal out in the 5+ years we've been going to Oliver.
Are we weird? Cheap?
Probably cheap.

And speaking of cheap, how about this chair and footstool that we picked up at the Kiwanis market Saturday morning after we arrived.  $5 for the two of them.
Our living room, which is quite small,  well the whole house is small, 520 sq ft with about an 80 sq.ft utility room including stairs to the partial, unfinished basement added on the back.
The living room used to have two chairs and two love seats.  Then we did some rearranging and took out one love seat and brought up a chair which was the twin to 'Jake's chair' from home.  It was okay, but it was a bit big in the space and was the wrong colour.  So the $5 'new' chair has moved in and Jake's chair is in the basement, and he gets to curl up in one of the other ones.  He was a bit confused at first, but got it figured out eventually. 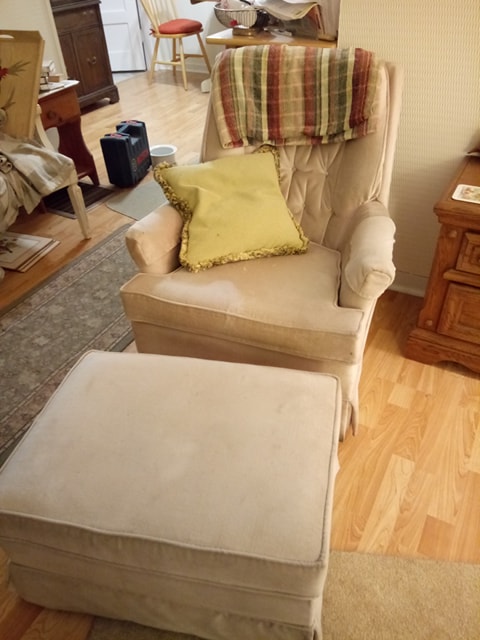 The footstool is a bit big in the space, but Larry likes that the chair rocks and spins and he can easily turn to watch the tv which is out of sight to the left of the picture.  Except we didn't watch much tv this time because we are just using an aerial since we don't want to pay a monthly fee for something we usually aren't there to watch.  Sometimes the one channel we get with the aerial comes in decently, but this time it was not.  The picture was watchable, but the sound was all static, and the closed captioning becomes annoying after a while.

The neighbour over the back lane kindly gave us her wifi password, so we are able to use that.  It cooperated pretty well this time, but sometimes that can be a bit sketchy too.

Of course I had a slew of projects lined up to do while we were there.  They all got done, and I'm pretty happy how it all turned out.  More about that later.
Just know that we drove there with a fridge, a dryer, and a bathroom cabinet in the back of the truck.