It's quite a few years ago now but I remember asking son David what he was looking at on his laptop, that he was finding all these different vehicles and auto parts.  And so I was introduced to Craigslist...
And I was smitten....
Poor Larry, I dragged him all over the countryside, and Vancouver, picking up this and that and the other thing.  Some free, some not, but all of them a bargain in some way or another.  The Craigslist fever did fade out a bit, but every once in a while I'd find something else that I thought we needed.  Sometimes I'd go on my own to pick something up.  I'd always leave the address of where I was going, and in the last few years now that we both have a cell phone, I'd text him when I got there and again when I left.  Never once have I felt unsafe, but I'm very aware of the situation and remain on my guard.

Not long ago I heard of Bidding Wars.  Abbotsford has it's own Bidding Wars page on Facebook.  People list their items with a starting bid, the location to pick it up, and people have 24 hours to bid on it.
Oh dear, I'm hooked.  I have sold quite a few things myself, in fact the dollar value of what I have sold may exceed what I have bought, maybe....Well since I haven't kept track of what I have bought, and some were bought  traded for eggs instead of money, I can't be sure, but I can convince myself that the amounts must be close.😂

I thought about it the other day.  I think there are only two things at Wyndson Cottage in Oliver that were bought brand new.  The tv was one, although it's not that we couldn't have found a good second hand tv.  Between Craigslist, garage sales, thrift shops, what we had extra at home, and now Bidding Wars, we have furnished the whole place, everything, all the kitchen stuff, tools, everything.

I mentioned we took up a bathroom cabinet on our last trip.  The bathroom is tiny.  In the picture below I am stood in the doorway.  The floor space is 5'x 4.5'.  There used to be one of those cabinet things that had legs that went up either side of the toilet with storage space above.  Next to the other end of the bath was a tall 1' x1' shelving unit.  We took half of that shelving unit away, and the shorter one didn't seem so overbearing in the tiny room.  I never liked the over the toilet one, but since there was no storage under the original sink, we needed the space.
Putting up the 'new' cabinet over the toilet was our first project.  I paid $4 for that on the bidding war site. 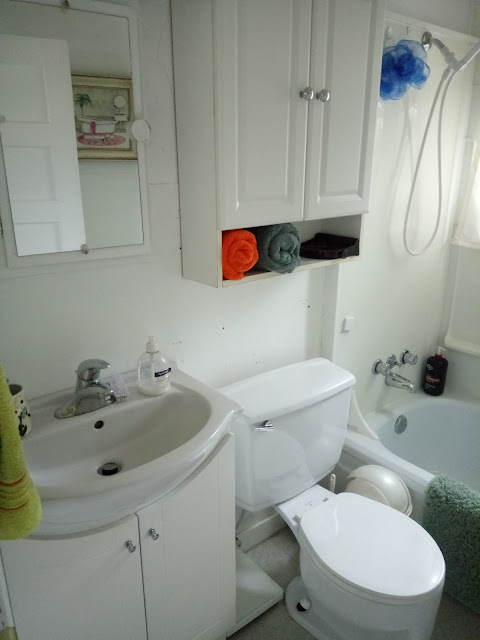 Simple you'd think.  Just screw the cabinet to the wall.  But like most home improvement projects, they are never as simple as they seem.  The backing on the cabinet was a flimsy thin particle board held on with a few tiny nails. The backing was not something we wanted to count on to keep the heavy particleboard cupboard in place.  We borrowed a few brackets from the old cabinet.  Larry thought that since it was so heavy it should have a wood support under it.  We found a thin piece and then found a better piece, screwed it into the studs and screwed the cabinet to it.  Better but not great.  That next morning we went to the Kiwanis market and found a bag of brackets for $3, and they were white and looked great and ended up using those and removing the supporting piece of wood underneath.

The cottage had a fridge when we bought it.  It was big and older, almond colour with dark trim. It seemed to run a lot, and seemed loud too. We wanted a smaller, newer one.  I found one on Bidding Wars.  The freezer door had quite a dent in it, like something had fallen into it and then fallen to the ground.  There was some interest, but bidding didn't go very high.  I had perfected my bidding technique I thought.  I wouldn't show any interest in an item, and then would bid in the last few seconds and was mostly successful.  With the fridge I cut it too close and was a second late. But, the seller wanted it gone that weekend, and the buyer was unable to move it until during the next week.  So it was offered to me for the winning bid, which was $14!! We went and got it right way, I wasn't passing that up.  I had the perfect fridge magnets for covering up the dent in the door!! 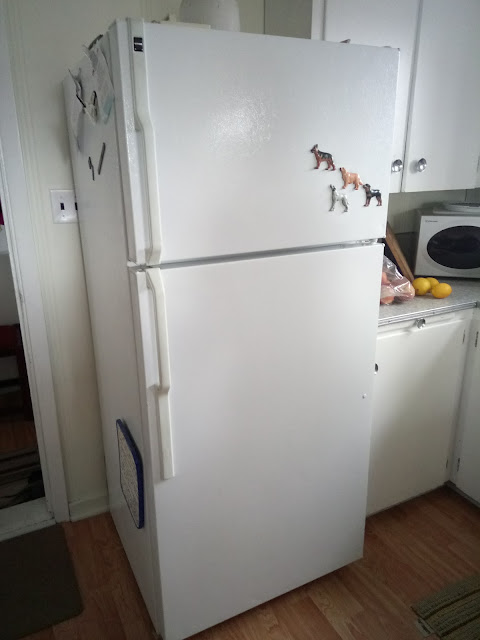 The smaller fridge also made for easier access to the light switches for the utility room, kitchen and dining area.  We changed two of them around and had the dining area as the most awkward one to reach behind the fridge.  We can leave that one on, and just turn the light on and off by the chain hanging from the ceiling fan. We also took off the trim along the edge of the counter, cut off an inch overhang of the counter next to the fridge, and put the trim back up.  With the narrower fridge and the  counter trimming we gained about 5" of floor space and as a result exposed two of the light switches. A big deal in that little house.

Since we had to transport the fridge on it's side, we left it standing up outside for a day and a half before we brought it in.  We plugged it in, and the darn thing just kept running and running, and things inside were starting to freeze up.  I unplugged it that night, and then next day we went though the same thing.  That night instead of unplugging it, I just turned it off with the dial inside. Good move!  The next morning when I opened the fridge, I thought it felt warm in there.  Well it was warmer than the house.  18 C!  I went whaaaaat??  I took something out that was under the fridge light, and it was really warm, so I did make the connection that it was warmer because it was by the light, so the light must have been on all that time I guess?  I closed the fridge door and pulled a bit of the door seal back and could see the light still on. So why is the light staying on?  When I checked where the light button was, I saw that it had been knocked out of position and wasn't getting pushed in when the door closed.  Eureka!  The fridge was running all the time to counteract the heat thrown out by the light.  Since I had unplugged the fridge the first night, the light wasn't on, but turning the fridge off with the dial instead, didn't turn the light off the second night.  After all that was sorted out, the fridge worked just fine, hooray!  Needless to say, there were a couple of meals of leftovers that we did not eat, but the dogs got them and they did just fine.

I'm sure you are all bored to tears if you managed to stick with me this far.  The third bigger project is now going to be a post of it's own.

Here's a Junco soaking up some rays and dreaming of Spring. 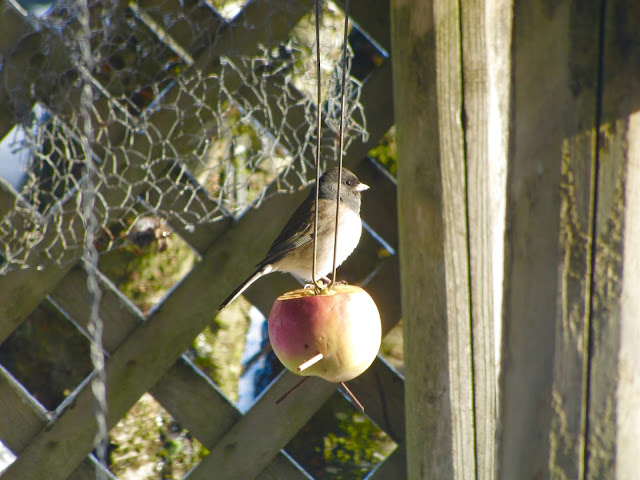 I'm just hoping that the rain I can hear coming down now will get rid of the rest of the 5" of snow that we were surprised with on Valentines Day.
Like the Junco, we too are dreaming of Spring.