The title of this post was supposed to be 'This Week', but time moves on faster than I do, another market is in the books, and 'this week' is now last week.  Since I already had the photos loaded, I am just going to get this post done anyway!

Monday is usually sort of a recovery day, after the market on Sunday.  The markets are pretty exhausting, we are getting older, what can I say.  So often there are no definite plans for Monday.  If I am productive, well good, if not, I just tell myself it was my day off.

There was one thing scheduled for Monday, and that was to get Ramona sheared. Well to be exact, for me to shear Ramona.  She expects an apple in the morning when we first go out to let the chickens out, and she is right there looking for it.  So after the dog walk I went back out with another apple and a rope and halter over my shoulder, figuring I could feed her the apple and drop the rope around her neck.  I tried to act very nonchalant, kept my body turned away from her, tried to act like I was not in 'predator' mode.  Didn't matter, she could read my mind, and I could get no where near her.  I tried to slowly corner her in a couple of spots, but she was having nothing to do with it.  I gave up, she is old and was carrying a heavy fleece, it was warm out, and I didn't want to stress her.  Larry and I discussed it and the next morning, Tuesday, he fed her the apple in her shelter, and we blocked her in and managed to get the halter on her and left a long rope dragging while we had our breakfast and walked the dogs.  Somehow she managed to get the long rope undone in the meantime, but thankfully there was a lead rope still attached and we got hold of her with no trouble.  That morning it was threatening showers so we got her into the shop, which was a good idea because it made the mess easy to sweep up.

I had attempted to sharpen the electric sheep shears, but wasn't too successful.  We left her standing and I started on her back and got off what I could, but the shears were really struggling at this point so I had to resort to sharp scissors. (Somewhere we have some hand shears, but they have disappeared into the abyss). I'll spare you some of the details, to make a long story a bit shorter, and it took about an hour.  I trimmed her feet too while I had her tipped up. 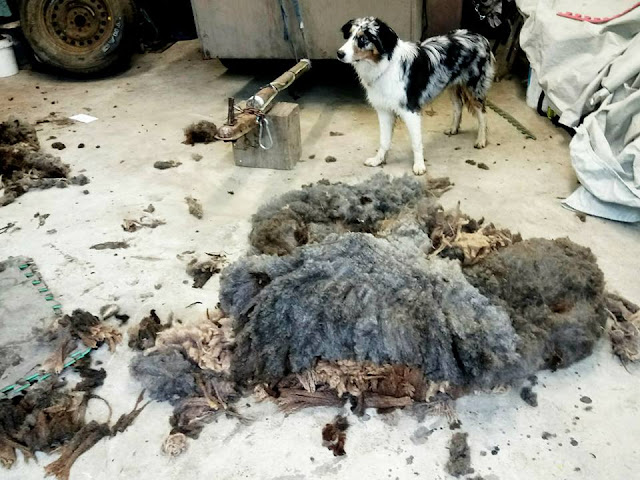 Ramona back out with her flock.
There are a few shaggy bits that were under the halter and got missed, but overall not too bad. 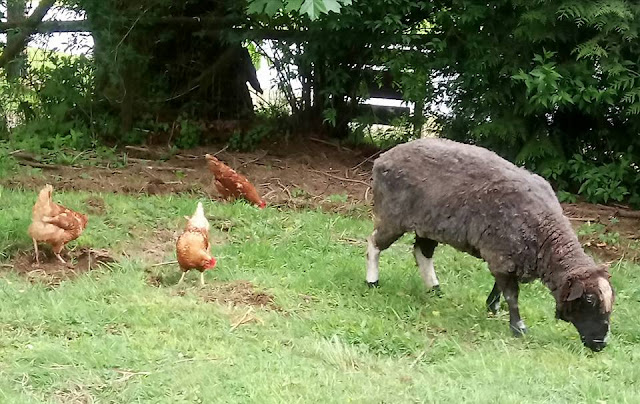 After that was jam time.  Three extra large batches of raspberry, and one of strawberry.  When that was all done I had wanted to head out to the east end of town, to go in Choices and buy a big bottle of real vanilla, the only place I have found so far to get a 500ml bottle.  Meredith had given me a $10 coupon for the store that she got in the mail, and over a couple of years I had accumulated enough points there to get $20 of free groceries. We decided to take the dogs with us and walk them in a different spot, so walked one of the dykes on Sumas Prairie.  On the way there it really started to rain hard, but luckily when we got out of the car, it had stopped.  Larry kept the umbrellas pointed at the sky to ward off any wet clouds, and we never had to actually open them up. 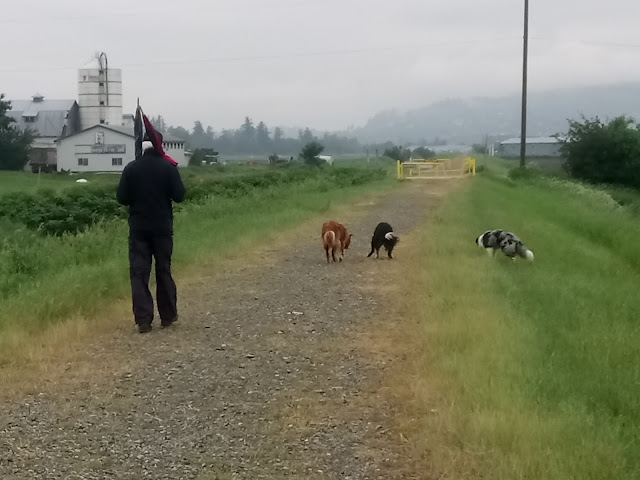 That misty hill in the background is the same one that was behind our tulip field pictures.
It is all farming land out there.  Much of the area used to be a shallow lake, and was drained to allow for farming.  Big fields of grass that had already been cut once, feed corn planted that was just coming up, massive hog, turkey, chicken and dairy barns, and not an animal to be seen.  It seemed so sad, and wrong, wrong, wrong.  We could see some dairy heifers at the end of one dark barn on the other side of the drainage canal.  That was it.  Well not quite.  As we were heading north to go get something to eat, we saw about six beef steers grazing up the side of the dyke, at a small holding there.  I know that they say it is more productive to keep the dairy cows in the barn, and bring the feed to them.  But, but, but......those cows have legs, and legs were designed for walking, and it just doesn't seem right that they can't get outside and feel the sun and wander around....Probably just as well that we don't eat dairy any more.  Or meat that doesn't get an opportunity to be outside and do what things with legs do.

Wednesday's jam batches.  Another strawberry, strawberry mango and strawberry rhubarb, and the dark one is bumbleberry.  After the second batch I felt like I was done, so I had to walk away from it for a while. 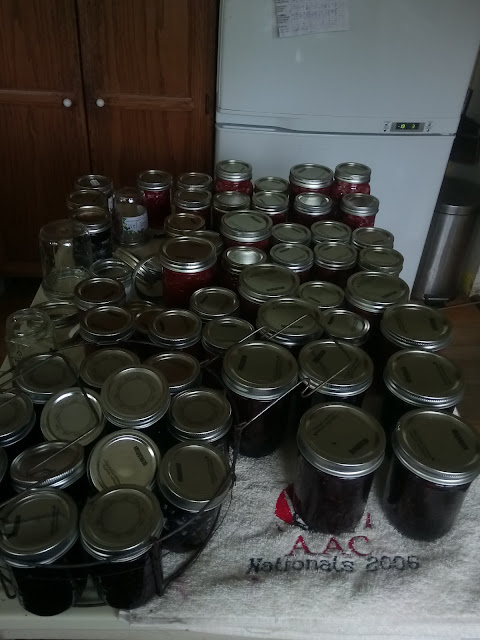 Thursday was cherry, peach and apricot jam day, and Friday was seville, lemon and three fruit marmalade day.  I bought this thermometer years ago, at a thrift store or garage sale.  It has served me well.  Last year I found a 'better' thermometer.  One that has a clip to hook it on the side of the pot instead of the twist tie I use with this one.  Bigger and better, I thought.  Earlier I had some trouble with seville marmalade, and it turns out that the new thermometer was wrong.  The tube had slid out of position and was giving me the wrong temperature, to the marmalade was cooking to a higher temperature than it should.  I have calibrated it with this old one, but the tube still moves up and down too easily, and there is no way to fix it without risking breaking the glass, so I think I'm just going to stick with the old one now.  The temperature of the marmalade has to get to 220-221 degrees, and then I test a bit on a cold lid that has been in the freezer, to make sure it is going to set.  I still have the rare batch that doesn't set properly, but most are okay. Making marmalade is a long process. 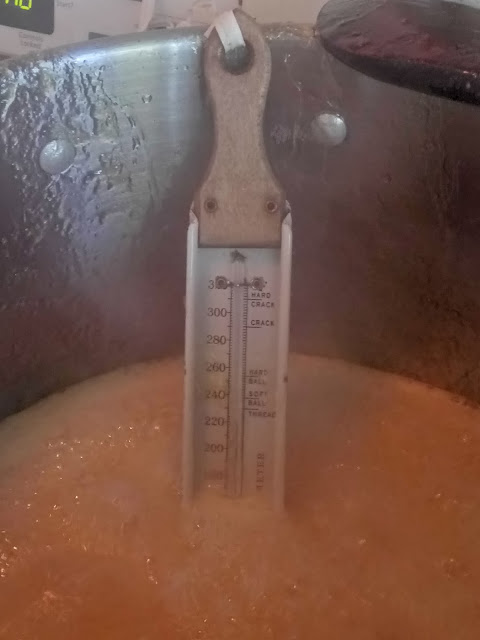 Saturday morning we went to some garage sales.  We never did find a good one.  Well there were a couple near the end that probably were, but by then most of the good stuff was gone.  At our last one we got our biggest, best and most expensive buy.  A green plastic Fort wheelbarrow for $15. 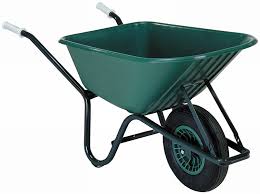 We inherited  one when our neighbours moved, and we have found that it is our favourite.   Two of your favourites is even better. We find that we can never have enough wheelbarrows!

After that it was market prep for me.  Somewhere during the week I managed to get a bit of sewing and gardening done, but the gardening needing doing is overwhelming.  The grass and weeds have gone wild.  I think Larry mowed something everyday.

There is more I could talk about from last week, but I've babbled on to long already.
Congrats if you stuck with me this far.