Feeling a Bit Out of Sorts

David flew in from Edmonton on Thursday evening.  Melissa picked him up and they came over here, and Meredith joined us as well and we had a really lovely dinner and visit.   The next morning they headed out early to pick up the Uhaul van that David had reserved.

The place that they rented in Edmonton came with a bit of furniture, but they needed more.  I offered them various pieces that we had, and they said 'yes' to seven of them!  Yee ha, we could get rid of some 'stuff'.  Most of it was already in use somewhere.  In fact the two biggest pieces were in my sewing room.  The big dresser was holding up one side of my cutting table, and the tv stand project piece was maybe going to be a shoe rack bench in our bedroom, but in the meantime I was using it to store fabric.  Then there was a matching chest of drawers that went with the dresser, as well as a matching night table, and another night table that almost matched, and a third night table that Larry had made in high school. Yes, we hang on to everything!  Some of the stuff was piled outside the front door. There was also an old trunk (potential coffee table?), and a solid oak desk (buried under the tv stand) that David had picked up for $10 and $3 respectively when he had come to some garage sales with us on his graduation trip. 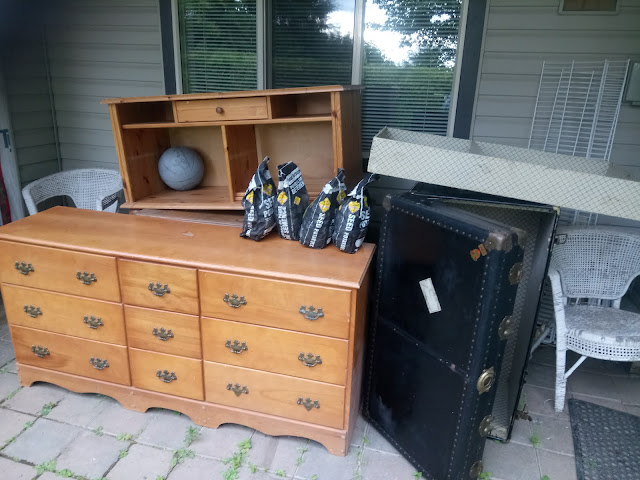 We also passed on to them a large, heavy three piece mirror that was meant for an old style dressing table, the kind that is lower in the middle.  A stupid purchase I made at an auction many years ago when I was determined to outbid a dealer lady that was snapping up all sorts of antiques.  And....we never used it, anywhere.  Good to say goodbye to that! 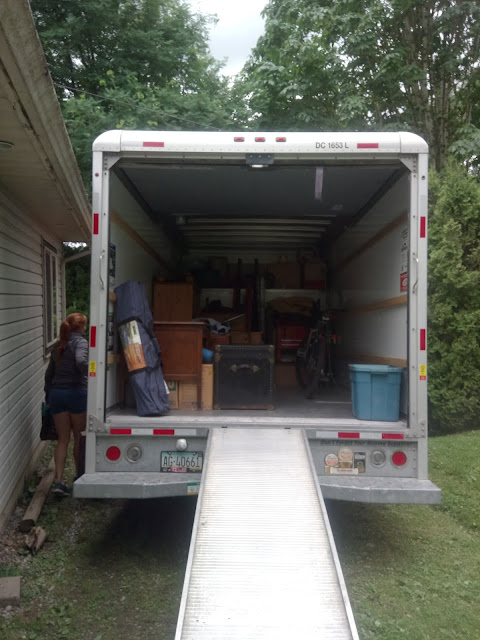 Still lots of room, but Melissa was concerned that all her stuff, including furniture and horse stuff, might take up more space than was left.  Thankfully, in the end, it all fit in.

They left our place Friday noon, to go and load Melissa's stuff.  We said our goodbyes sort of, but then I decided I was going to bring a cooler over to the horse barn with food in for Tucker (I had been feeding him a raw diet) on Saturday morning when they were leaving.  And then I thought how silly that was, I was going to get weepy all over again.
That afternoon it seemed so incredibly quiet.  No Tucker to be wondering about.  Where is he, what is he doing, what undigestible thing is he eating NOW? Damn dog....
In fact that cute little pup had turned into a pretty nice dog.  We have had him to ourselves this last three weeks, and mostly to ourselves a previous three weeks, and then much of the time since last Christmas.
It just seemed toooooo quiet.  I didn't have to worry about unplugging the laptop charger and picking it up from the floor.  (Yes he did chew the end off the charger once)  When I opened the dishwasher, no dog dashed over to give the dishes a quick prewash.  There was a presence missing, that was for sure.  I felt really out of sorts and just didn't quite know what to do with myself.

Saturday morning I got the stuff sorted out for the cooler, and there was a bag of odds and sods they had forgotten, plus some dried apples for the trip.  I was feeling a bit better about things, and wasn't quite as easily bringing myself to tears, just thinking about the tears that would fall when we said goodbye, again.  Oh I am a weeper, just ask my sister! (I was the Maid of Honour at her wedding, I think I cried through the whole ceremony)

We headed over to the horse barn but knew we had lots of time so stopped at one garage sale on the way.  I got myself a chicken!
Maybe I need to hide her in a patch of weeds, and she will look like she is sitting on a hidden nest of eggs. 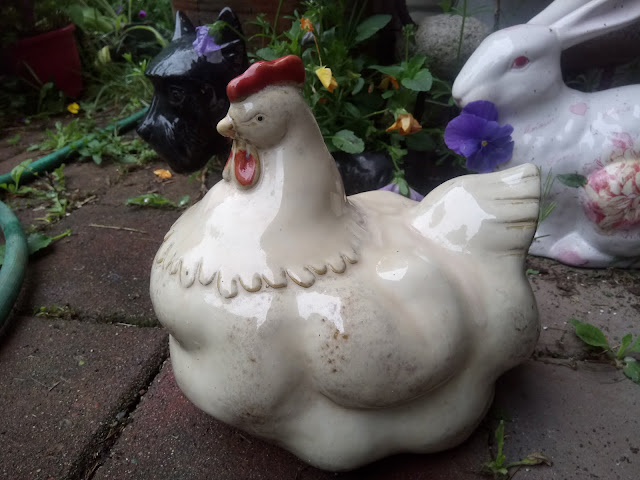 Eventually the horses were all loaded and ready to hit the road.  Melissa's mom was going along on the road trip.  Her Grampa was pretty cut up about Melissa leaving.  He used to go and help her with the horses, sometimes feeding them for her or cleaning up after them.  The barn owner has said he can still come by and she will have some little jobs for him.  It won't be the same though, and I know they will miss each other terribly. 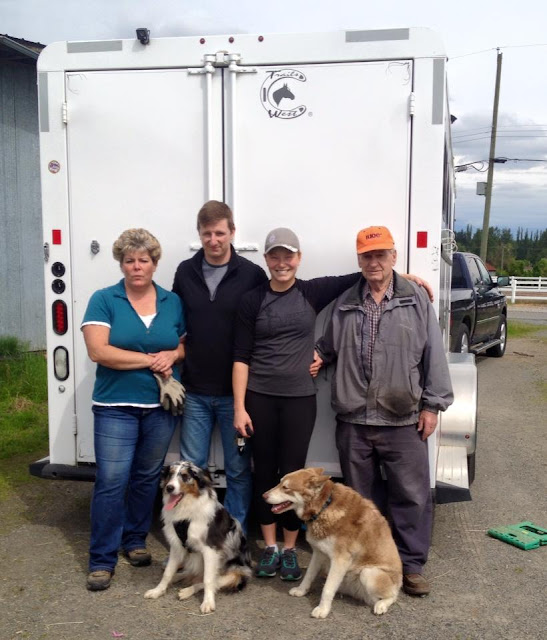 Tears were shed, I wisely put on sunglasses (because it was so bright!) and so managed to hide some of the waterworks.  I even saw David wipe a tear away.....  Excited for them and the new life they are starting, but so sad to see them go.  And I will miss my little Tucker man.

So after that emotional departure, we consoled ourselves with some more garage sales!
We got a few good things.  Jake got a 'like new' raincoat for $5.  The fold up dog crate was also $5.  It was a bit grubby but a scrub brush and soap and water made it look like new again.  We used it at the market today.  Luna got a soccer ball and a basket ball $1.  Larry got some great work gloves 50 cents, some tools, and emergency car kit and some packages of screws all for $7.  I got a car dust buster $2 for David to keep his new car clean, and 2 pairs of like new little ballet shoes for $2.  Melissa teaches ballet, and maybe one day will open her own school, and can use them.  I like to plan ahead ;-) 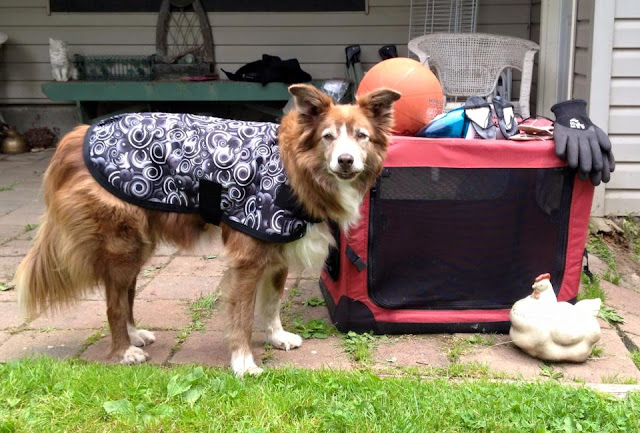 We are planning on having a family reunion at the end of August at a horse show in the Okanagan.
I wish they were living closer, but to look on the bright side, at least they aren't living in England.
Oh, I need to put my sunglasses on again.