A Quick 'There and Back'

We made a quick trip to Oliver last week.  Just two nights away.  We wanted to go and check on things, cut the grass and water everything.  The previous trip at the end of May, we got rather a shock to see the grass and weeds in the back 'lawn' looking like a hay field.  A bit embarrassing, and just that day the neighbour across the lane had come in with her lawnmower to tackle some of it.
Oops. 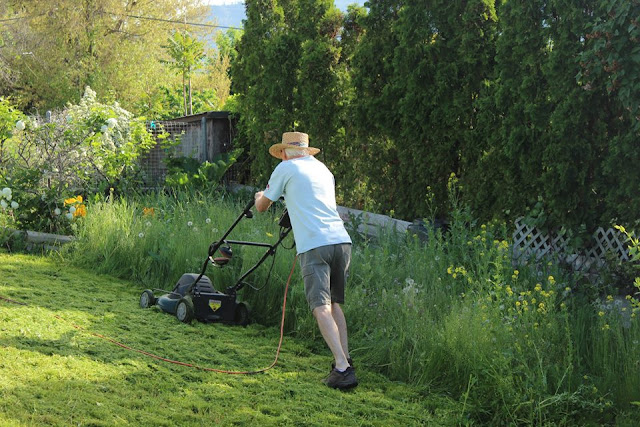 Usually the day we are leaving I have a long list of things that 'must' be done.  Of course it is only me that thinks they are essential, and it always involves plants or seeds.  This time we had a chiropractor appointment in town at 10am.  Soooo, I needed to be ready to go by 9:40, as town was in the same direction as Oliver and it would seem to silly to backtrack home.  We made the appointment with time to spare, mostly because the doctor was running late.  The weather was decent, cloudy and warmish, and the forecast was for improvement and sunshine for the rest of the week.  Just a slight chance of showers.  The dogs still needed a walk so we stopped at an off leash area near Sumas Mountain and walked along the dyke.  We could see a rain shower in the distance along the mountain, and it gradually caught up with us and then got very heavy and we had to make a run for the car.  Back on our way.

Larry had heard that traffic was backed up because of construction the Vedder Bridge, so just in case we took a detour, that I thought would only add minutes on to our travel, but it seemed to take ages to get back to the freeway.

I was driving this first stretch.  Nearly an hour into the trip, a few miles out of Hope, I suddenly noticed some red lights behind my sun glasses which were sitting in front of the speedometer.  Battery light on and temperature light flashing red. Oh shit!  So I took the next exit and we pulled over and stared at each other.  Larry may have a couple of mechanically minded cells in his body, but his brother and our son got the other 99.9% of them.  It didn't help that it was pelting rain, and we didn't really have the right clothing.  Eventually Larry got out and lifted the hood, and all I could think of was that he was hoping there was a flashing red light and an arrow that said 'problem here'.  Anyway, I got out and added my lack of mechanical knowledge to Larry's, but even I could see that there seemed to be a belt missing by the alternator, which Larry had already noticed.  So to spare you a few details we limped into Hope, taking a few stops to let the engine cool a bit, but thinking back maybe the flashing light came on because the water pump wasn't working either.  (David's suggestion) The engine may not have been hot, but we were being warned that things weren't right.  I was Googling mechanics, and our first stop wasn't able to help us, but made a suggestion where else to go.  There we were successful, or at least they were able to look the car.  We couldn't leave the dogs in the car, so headed out for a walk, and the weather was still wet.  I had gone from shorts, t shirt and sandals to pants, windbreaker and runners. Larry was less prepared, so we borrowed an umbrella from the dealership and hiked off to McDonalds for some coffee and a bite to eat.  Those showers were still coming down.  At McDonalds we sat at an outside table on a pile of paper napkins to keep our backsides dry.  Then the rain started to pour again and we had to go and stand under the overhang at the front of McDonald's, where the panhandlers hang out, thankfully none there that day.  I'm sure the dogs just could not figure this out.

The rain eased, and we took the shorter route back down the main road, but then the rain dumped on us yet again.  We found a massive tree to stand under for a bit, and then WE were approached by a panhandler.  Always glad when I can honestly say I have no money on me. 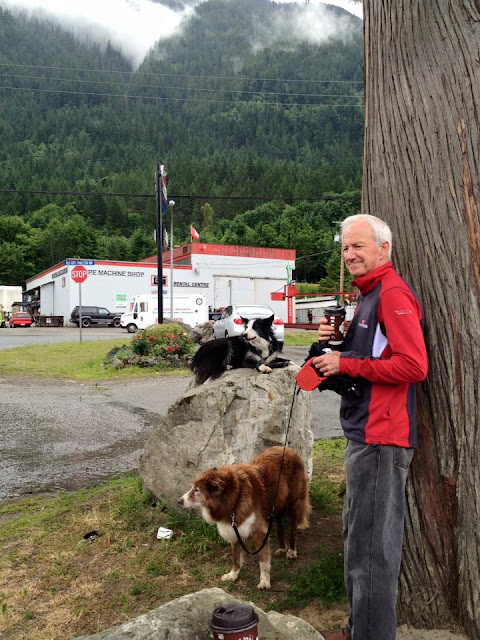 By the time we were almost back to the dealership the sun had broken through for a few minutes.  We passed this cute little store with a nice garden on the side of it.  Worth a look into one of these times, but I just wasn't in the mood that day. 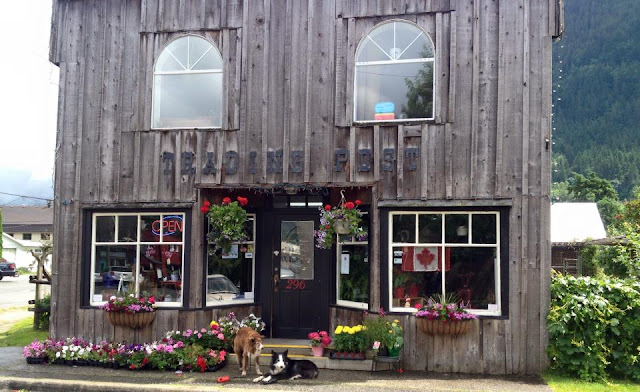 We even caught up to our panhandler friend on the way back, as she was heading home.
The car had been moved and was at the back of a lineup.  I didn't know if this was good or bad news, so was very much relieved to see Larry getting out his wallet when he went into the office.  A $107 and 2 hours later we were back on the road, yee ha!!

Lots of construction slow downs, raining again but blue skies in the distance. 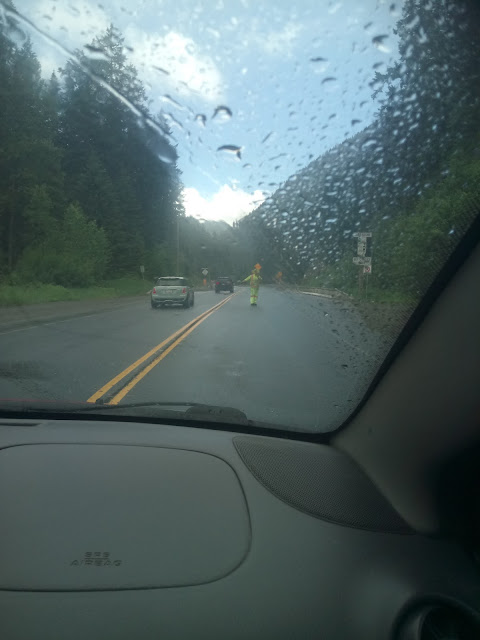 Paving going on here.  We had to sit and wait while that dump truck came down the road from the right.  It had to turn around with that pup on, in the roadway and that narrow bit of gravel.  It was entertaining.  We watched that truck back into the power pole twice and also hit one of the pylons and push it over the edge.  Oops! 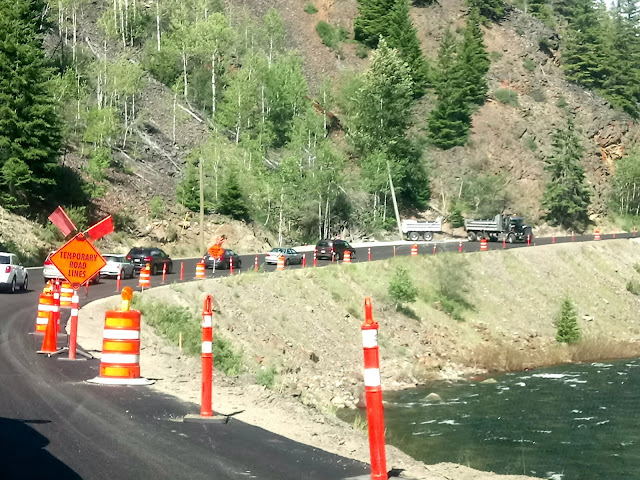 Heading down the mine hill before getting to Princeton.  Blue sky and puffy clouds! 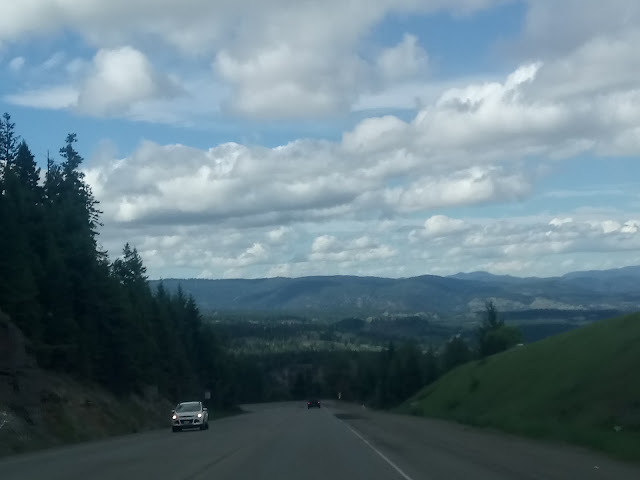 So instead of the 3 pm or so that we had expected to arrive in Oliver, it was 6pm.  At least it was before our usual 'just getting dark' arrival.  The 'lawn' wasn't too long, and was quite dry, and the grass/weeds were crispy sounding as we walked over them.  Larry got the lawn cut and I started watering.

The next morning was sunny and nice.  It is really unusual to see Luna out like this, actually relaxing/dozing in the sun.  She is usually either yipping at the door to come in, or is curled up just under the window I am taking the photo through. 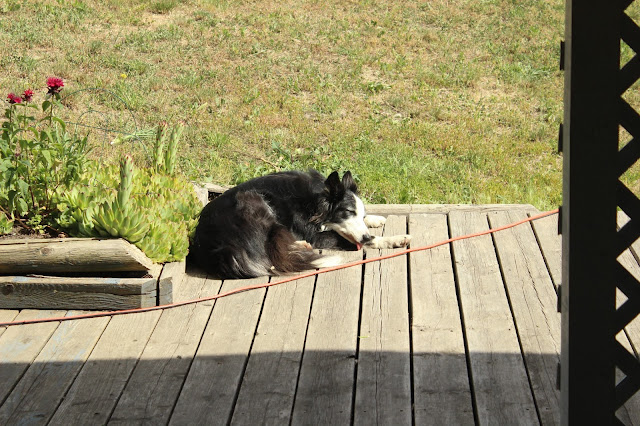 We have a lot of this succulent growing there.  Comes in handy to fill in bare spots and survives the heat and drought.  It has interesting 😉 shaped flower stalks that get taller than this and then end up falling over.  That is a bee balm in the middle and a wallflower to the right of it. 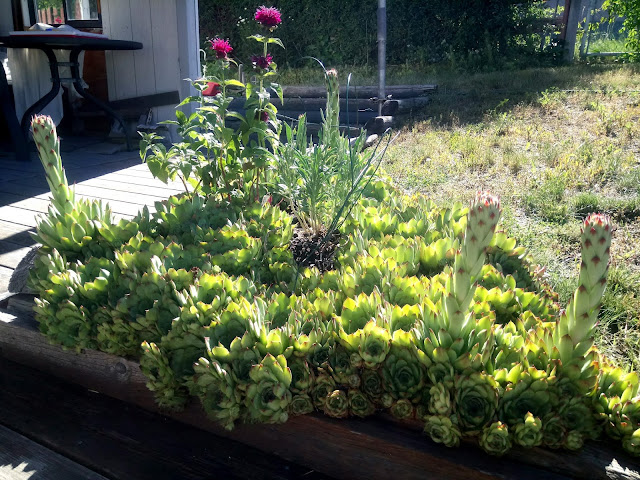 The dogs got their morning walks and a nice swim in the lake in the afternoon. 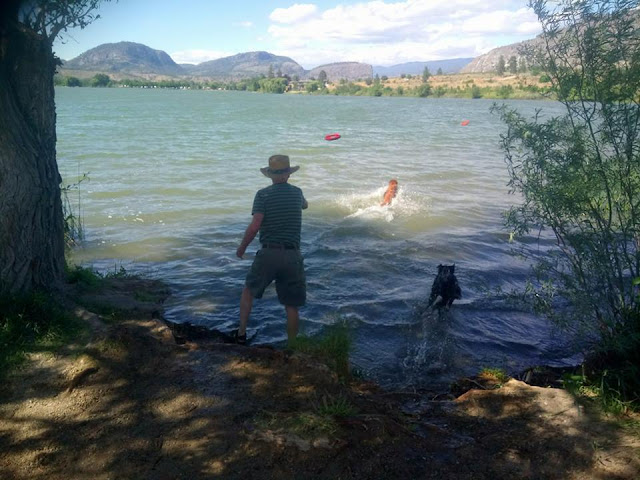 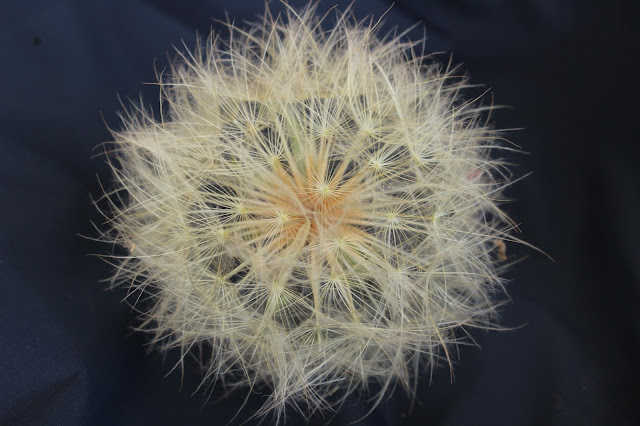 Too soon it was time to leave.
I said goodby to the porch pooches, and promised to return soon. 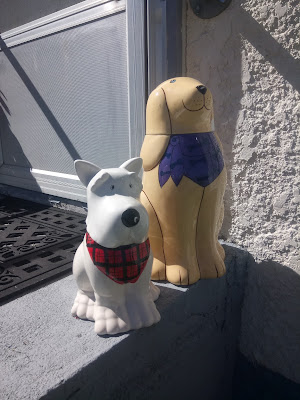 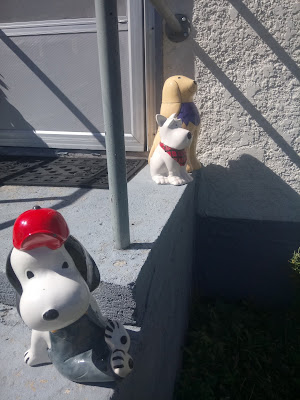 I'd love to have a nice planter with flowers on the front step, but they would soon be dead and crispy from lack of watering.  The porch pooches and some fake plants on the other side of the door are the best I can do.
Posted by Karen at 3:04 PM