Daffodils And Some Big Decisions

Here it is the last day and April, and it's a beautiful Spring day.  Some sun and blue sky and big puffy clouds.  A bit cool and a bit of a breeze now and again, and a load of laundry hanging on the clothes line.  The perfect kind of day for working outside.  This morning I stopped and did some digging out of weeds in the north garden.  I want to get the dahlias planted there, or at least some of them, and I want to get it done in the next few days.  I am DETERMINED this year to get them in in decent time.  We have had so much rain that the ground there is still a bit wet in spots, but will mostly be okay.

The daffodils have finished here, and my one little bunch of tulips is blooming.  The cherry trees, both ornamental and fruiting ones, are in full bloom.

The fellow up the road that is a daffodil grower breeder packed up his roadside stand earlier in the week. 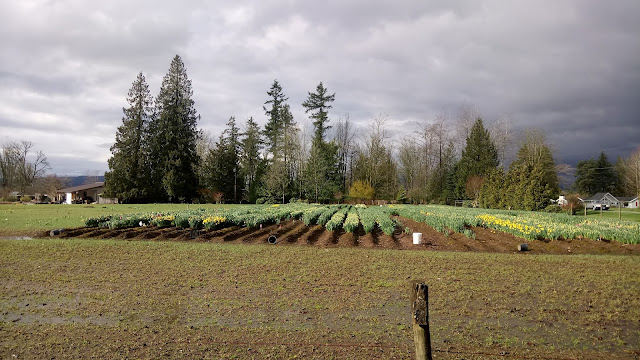 We walk past there most evenings with the dogs.  This particular evening we had all four.  They get to go off leash on this quarter mile section, which is a road right of way.  The daffodil stand would be behind Larry on the other side of the gravel laneway. 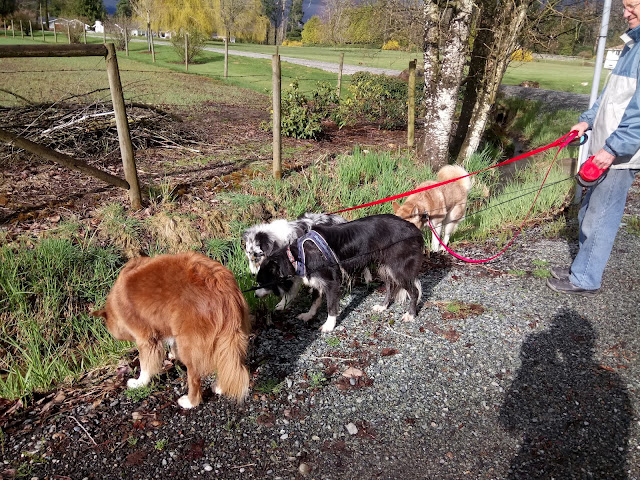 That's our road on the left, and it makes a 90 degree turn here at the corner 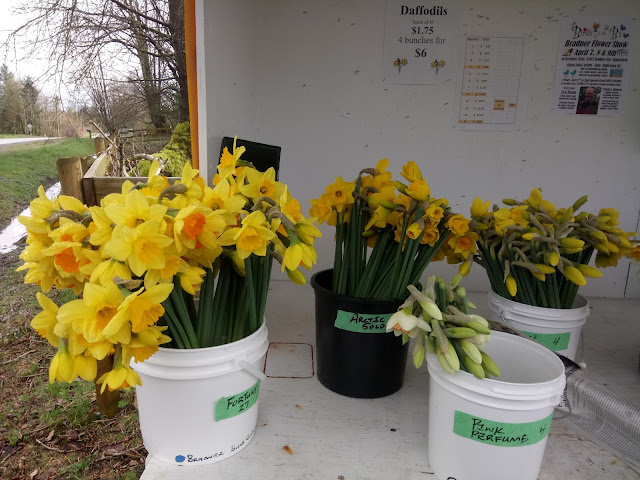 There are lots of daffodil stands in our area, as we are a daffodil growing area, but this particular stand probably has the most wide variety of daffodils 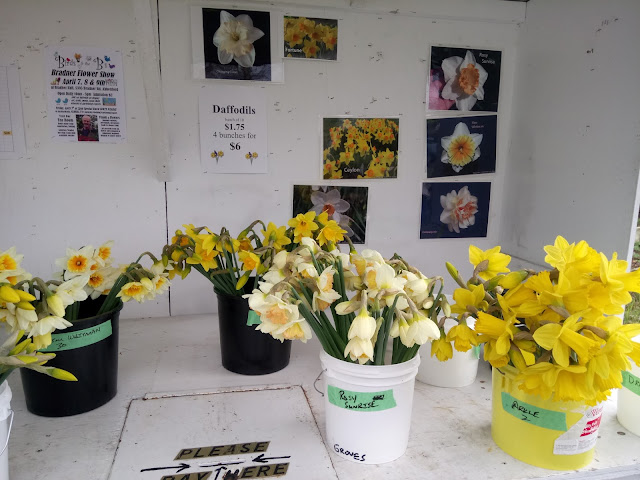 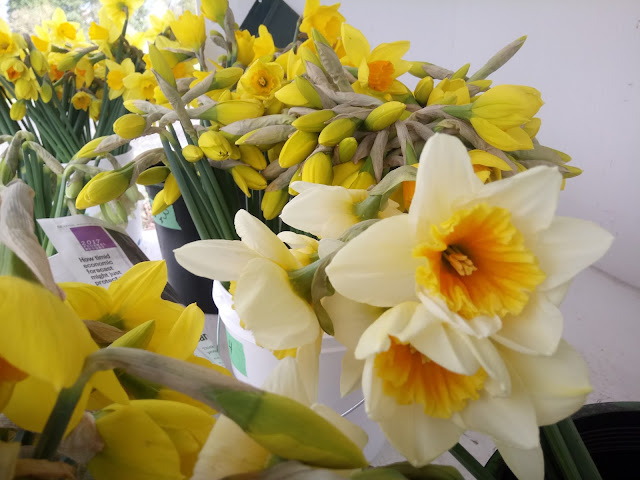 Another half a mile away is this huge field of dying daffodils.  I think some years they are picked for the cancer sales.  This year the daffodils were late, and then all came on in a rush, so it was a big mass of blooming flowers. 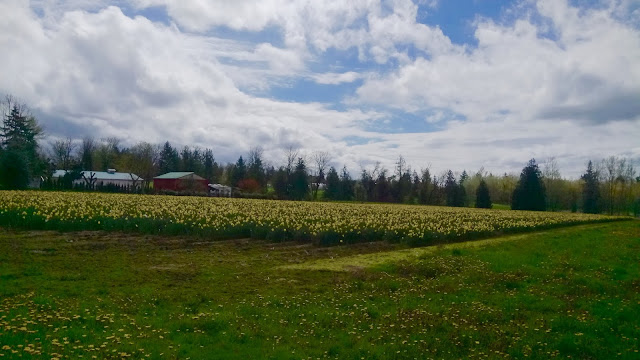 The stand at the corner had a half price sale on bunches for the last few days.  For $3.75 I got this beautiful display. 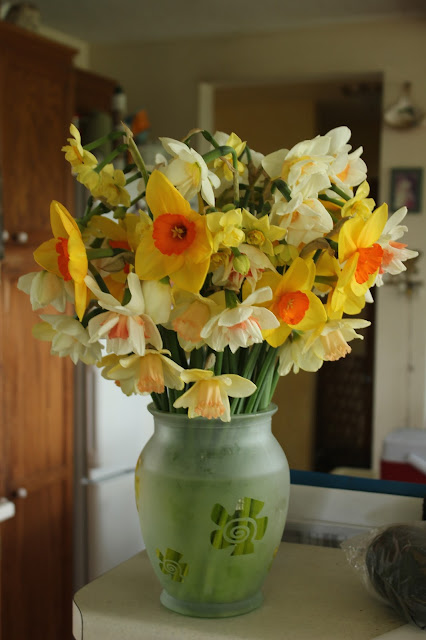 As for big decisions.....well a while back I had to do a mass jam making session.  One of my fruit freezers decided to kick the can.  By the time I discovered it, everything was thawed out.  I discovered it in time to rescue some of the fruit, as there were still some clumps of ice in the freezer.  The problem is that some of the plastic bags of fruit tend to get small holes in them as them are moved around in the freezer.  So that fruit all leaked out of the bags and was a fruity mixed mess in the bottom, and useless to me.  I was able to salvage quite a few of the bags, and did a LOT of jam making that week.  One day as I was stirring, I thought to myself that I didn't really want to do this any more.  It's not that I haven't thought this before, but this time I am going to act on it.  I decided that next year I am going to phase out the jam making.  Maybe not all of it, but most of it.  After I have used up the fruit that will be carried over from this year, I'm just going to make jam if and when I feel like it.
I have a feeling that there will be a lot of disappointed customers. 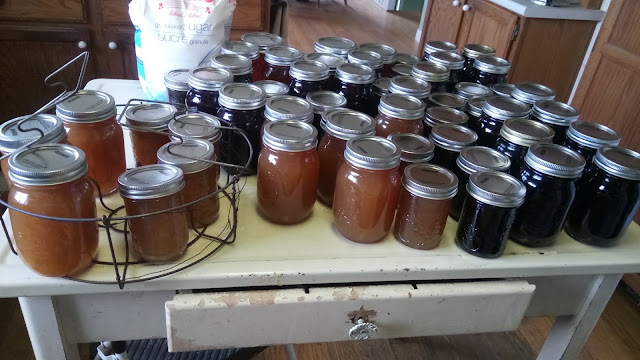 The other big decision is David's and he has accepted a good position in Edmonton, Alberta.  It is about a 12 hour drive or one hour flight away.  He set off yesterday in his land rover and will be arriving as I am typing this. He will be flying back in three weeks to attend his grad ceremony, and staying for the week, and then will be flying back again in mid June when Melissa has finished her work contract.  Then the big move will take place as there are two dogs and two horses going along as well.  We are looking after Tucker for a bit.  He may fly back with David after the grad week.  It all depends if David can convince his boss in the next few weeks to let him have a dog in his office ;-)

Things are changing around here.

PS  About 2 seconds after I hit 'publish' I got a text to say that David had arrived at his new accomodations!! A mother is always relieved that her kids (no matter their age) have made it safely.