On Friday I did the fourth to last training run before the big day, which is the 10k on April 23rd.  It was a particularly hard run, although should have been relatively easy compared to some we have done. It was hard because my running partner Meredith was a four hour drive away (we are in Oliver over Easter), and mostly because I am battling some sort of cold/chest infection.  I considered not running, but convinced myself that it wouldn't be too difficult.  It was only 3 x 10 minutes of running with a one minute walking break between each 10 minute run.  I found it really tough though, and didn't feel well in the evening, and than had a very crappy night, walking up a few times with me and the bed damp with sweat.  As a result I'm giving myself a bit of a break and I didn't run today.  I need my lungs to sort themselves out and recover.

A cool down on the dyke near the Mission Bridge.  Running on a long flat surface, where you can see long distances is boring, we realized. 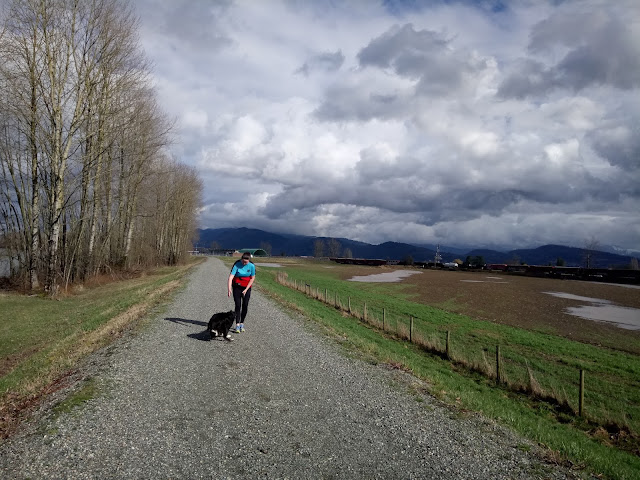 Other than our visit to Oliver in February, Meredith and I have done all our training runs together.  I would meet her in Abbotsford after she was off work on Tuesdays.  She would come to our place to run on Thursdays after work, and stay for supper.  On the weekend we would try to pick somewhere a bit different and meet there.  Anything to make it a bit more interesting for us, take our minds off it, distract us, whatever.

Sunset near Jubilee Hall at the end of Bradner Rd.  A few Thursdays we did this run in my neck of the woods. 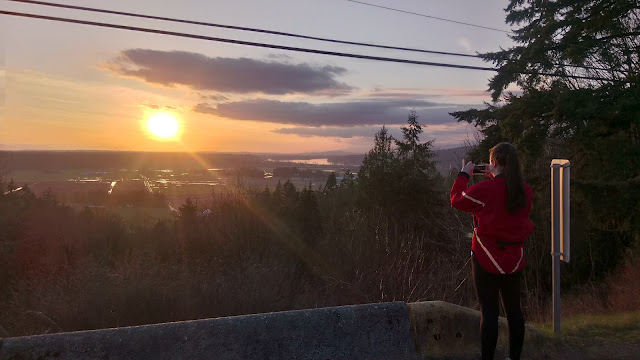 Neither of us are born runners, whatever that is.  Neither of us really like running, although will admit to feeling good about ourselves if our run went well.  In fact there are many times we could easily say that we hate running. Sometimes we wonder WHY are we doing this again.  This is my fourth time, and Meredith's fifth.  I think it is the challenge, and the discipline that it takes to meet that challenge.  The training program is all laid out for us.  We agree when and where we are meeting for the next run when we finish the run on any given day.  Of course something comes up at times and we have to make changes, but the fact that someone else is counting on you keeps a person going.

This year has come with it's own challenges.  Winter was bad, and Spring slow to come.  We have run  far too many times in the rain.  Light rain is fine, heavy rain not so much.  There were even a couple of evenings of doing the longest run of the week (Tuesdays), that it was raining so hard that we started running again during our five minute cool down at the end, so that we could get back to the car faster.
Once our runs got longer, I gradually reduced the length of my leggings, and have been running in shorts for maybe the last few weeks.  I get so hot when I run, and CAN NOT stand to have my legs encased in lycra.  But, I stayed in full length leggings for weeks, because the weather never seemed to get any warmer.  Meredith, who does not have the same leg claustrophobia, is still in long ones.  I think there has only been one day that we ran without starting out with a jacket on. All my cool running jackets that I've picked up at the thrift stores, I've had loads of use out of them this year, as well as my cap, when it's rained.

One Saturday we met at Aldergrove Lake Park.  Larry came and took Jake for a walk, while Luna ran with us.  We are done here, and exhausted. 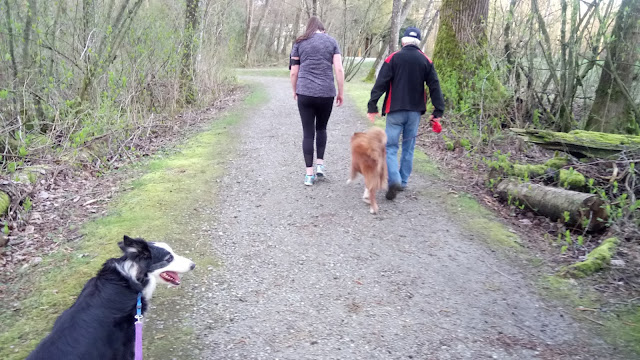 Finally a legitimate reason for me to say that it smells skunky around here.  Took me a few times to realize that the skunky smell that I would occasionally smell as we ran through a subdivision was not from a skunk, or skunk cabbage..... 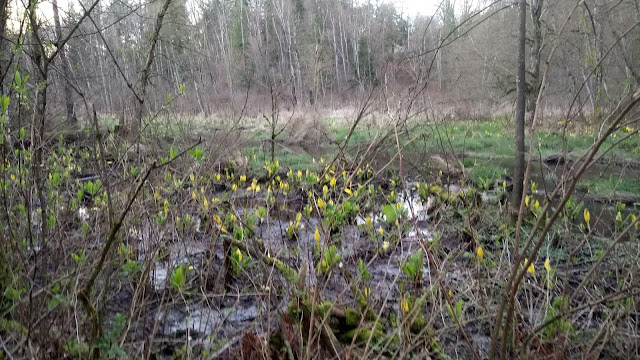 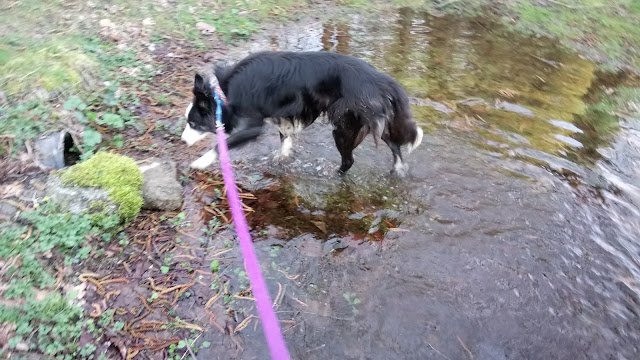 I'm thinking that this may very well be my last year for the Sun Run.  My knees and right hip are not particularly happy.  My right knee is the one that felt like it blew up right before the Sun Run last year.  It gets stiff. The left one gives me more trouble though, a bit of pain sometimes when I first start to run, but then it goes away as I continue. All three joints are stiff afterwards.  A smart person would probably have quit a while back.  Once I have made my mind up about something, I want to finish.  So that is my plan for this year, and then I will just see how it goes after my knees have had a good rest.

Running a week ago Saturday at Fort Langley.  We did the Brae Island loop (Tavistock Point in these two photos) and then back to the mainland and along the river.  Another of those rainy runs. 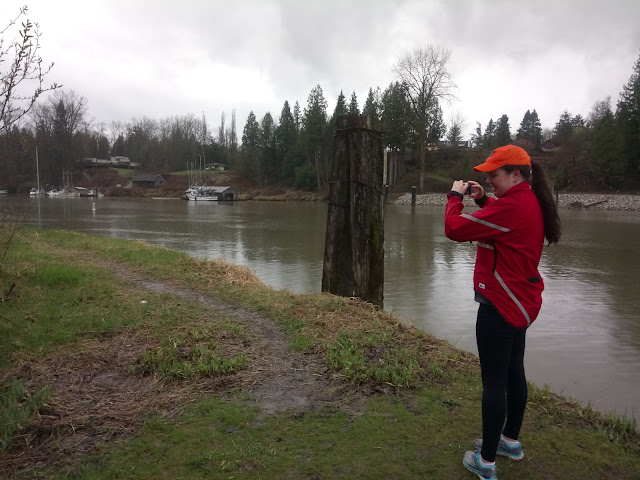 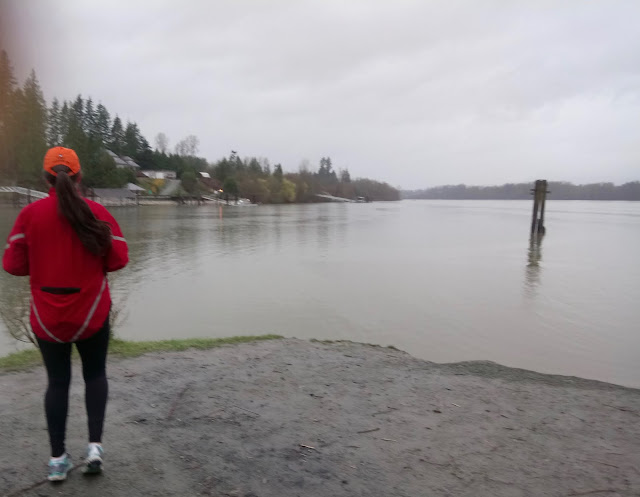 Someone had decorated three bushes for Easter, alongside the path. 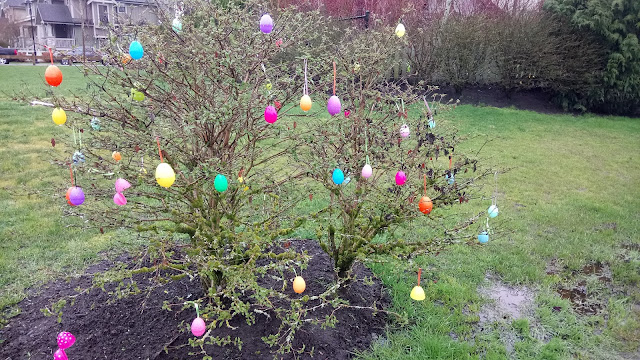 Yesterday we went on a two hour hike, and today we rode our bikes for 15 km on the flat, plus a couple of dog walks.  Not exactly laying around, but much easier than running!

Hope you had a nice Easter!