The Sun Run was yesterday morning.  The forecast was for clouds and showers, which we were really hoping would come true, as that would have kept us cooler.  On the drive in, we went through some pretty heavy rain, which was a bit concerning, but eventually drove out of it.  The sky was looking much better in the direction we were heading, too much better in fact, and I said that I didn't want to see any blue sky.  And sure enough there were some patches of blue.  When Larry dropped us off it was hard to know what clothing to take.  We both had on little jackets that we were willing to donate, and I had some yoga pants on as well over my shorts.  Stripped those jackets and yoga pants off before we got to the start line.  Meredith started out with her running jacket on, and I had a little waterproof jacket stuffed into my water bottle belt.  It stayed mostly cloudy, felt one drop of rain, but it got warm at times. 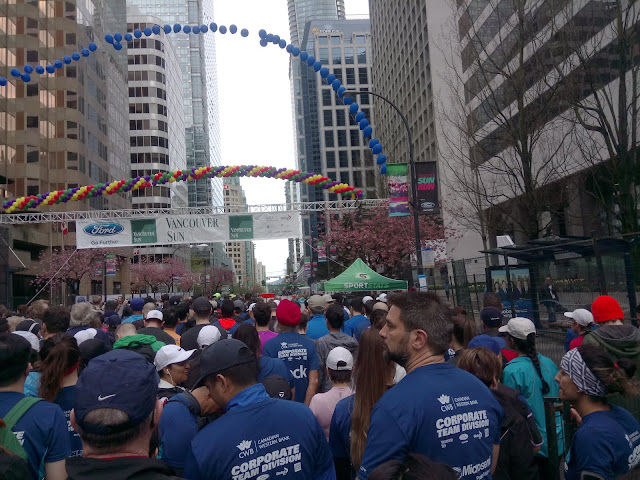 We got across the start line just before 9:30.  We were running together of course, and you get into a certain pace, and just keep putting one foot in front of the other.  Very gradually Meredith eased off and was slightly behind me, but I could just turn my head a bit and see her red jacket out of the corner of my eye.  She gradually slipped back farther (she said she felt really crummy at the start of the race) but I keep glancing back and could still see her.  Then she took her jacket if off and it was hard to pick her blue shirt out of the thousands of other blue shirts back there.  She said she could see me (in my bright green) turning around and looking and she kept waving me to go on, but I didn't see that.  At the half way mark there is a very steep hill to go up, before starting over the Burrard Street bridge.  At the top of the hill I ran in place for 30 seconds to see if I could see Meredith coming, but didn't, so kept going.  I was finding it really tough, but just kept planting one foot in front of the other.  I didn't even seem to have much in reserve to really take advantage of the downhills.  By this point I am totally exhausted, feeling awful and thinking that I am NEVER EVER doing this again.  Between about km 7 and 9 it is a long straight flat stretch.  I was exhausted.  I wanted to walk, but told myself no, can't walk, in four previous 10 k's, I've never walked.  Finally I just had to walk, so walked for about a minute and then got my self moving a bit faster again.  Just after that I got a pat on the shoulder from a woman going by, 'Good job, keep it up' she said.  I didn't know her from Adam, but maybe she had seen me walk and then start running again, who knows.  Appreciated the gesture, but as I looked at her run off ahead, she was one of those tall, very slim runners who just make it look so effortless.  I think I would have appreciated the gesture more if she had looked like she was  struggling like me ;-)

The last kilometre or so starts with the up the ramp to the Cambie Street bridge.  I'm proud to say I ran up all the hills.  The bridge itself is not much of a hill once you get up the entrance ramp.  Then there is down hill towards the finish line.  Most people were able to pick up the pace a bit, including me, but then the downhill runs out and there is a decent straight stretch to the finish line, and it was a struggle to maintain the pace to get there.  I had timed myself but didn't get the timer stopped right away, but was pleased to see I was around the 1:04 mark (one hour, four minutes).  Meredith came in a couple of minutes after me.  After crossing the line I almost felt that I could pass out, but that feeling went, and it was surprising how quickly I started to feel good.


A little red in the face, but happy we are done! 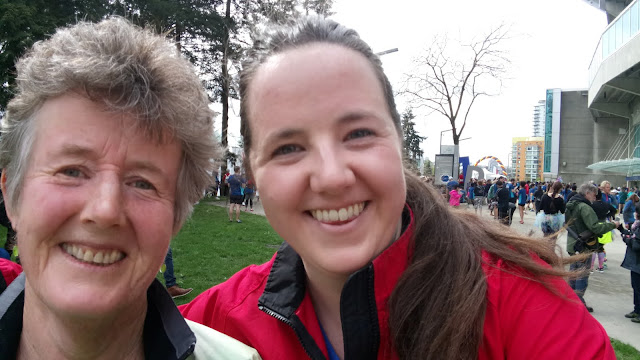 This morning I was expecting all my joints to be sore and achey, but they are not.  A bit of stiffness in my quads after I have been sitting for a while.  The longest toe, the second one on my right foot really hurt this morning.  It seems to get slammed into the front of the runner.  I thought I had laced my runner well enough to prevent that, but obviously not.  The pain from that has gone now.  While running yesterday I swore I was never ever doing it again, but kind of like childbirth, the pain has faded and the 'high' from gettin 'er done! is here, so it may happen again.....we shall see.

Meredith is doing another run at the end of May.  Good luck to her.  I'll be at the farmers market instead.
Posted by Karen at 12:07 PM