To the Usable Point.

The chicken coop is finally to the point that it is fit to house chickens. It is functional, but not pretty.  Hopefully the pretty part will come, although we are not so great at getting projects past the functional part sometimes. We do have a box of the house siding left over, so hope to use that on the most visible part of the coop.

The west end of the coop.  Can you see the little chicken door cut out at the bottom?  That's our $5 Craigslist bathroom window.  We have two smaller chicken coops, and they have bathroom windows too. 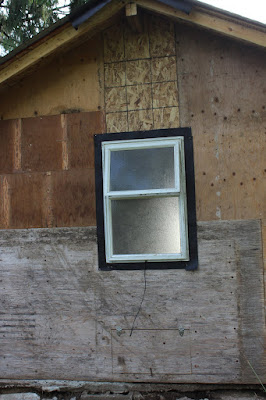 The east side.  That screen door was on our house originally.  When we found it hidden behind some plywood, I was thrilled.  It serves the purpose of a door and window all in one.  You can't really see it, but there is a window under the roof overhang on the south (left) side.  Right now it just has wire mesh over it, but we have a piece of glass to fit in there for winter.  The wood gates on either side were from the sheep barn.  The one on the left leads to the field, and the one on the right goes into the yet unfinished leanto for Ramona and is an outdoor, out of the weather spot for the chickens to hang out. 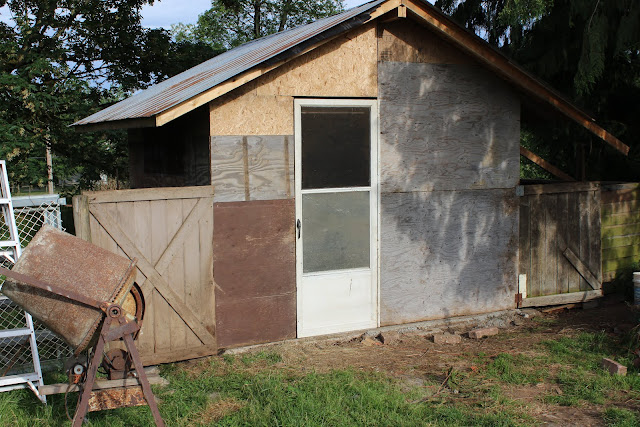 On Sunday we had the farmers market, and since it was a 34 degree day, we just didn't have the energy to work on the coop when we got home, although we did go out later in the evening.  We were out there early Monday morning and got the roof finished, and the doors and windows in, and a feeder hung up and water in there.  I headed off mid afternoon to go and pick up the chickens, and Larry tidied up so that I could back the truck right up to the door when I got back.  I was the last person to pick up their hens, and as luck would have it, an earlier person hadn't taken their full amount, so I was able to get 60 hens instead of 45.  We put a tarp into the back of the pickup, and threw some hay on top, and the hens are just put in there loose.  It's all fine until I get them home, and then they don't want to leave the truck.  I had to climb in there with them, and as I push them through the door they are trying to fly back into the truck.  It's absolute mayhem for a bit, until we get them all in the coop.  When I had arrived home,  Jake and Luna had met me at the gate.  I opened it, drove through, stopped and walked back to close it.  Luna had been all wiggly and happy to see me, and then all of a sudden her nose came up, sniff, sniff, sniff.  You could literally watch her body change from a wiggly little thing to a super charged, on full alert, I have a job to do, OMG that truck is full of chickens! kind of dog.  She herded the truck back to the coop, and just quivered the whole time we were unloading them.

That afternoon we didn't let them out of the coop, although we opened the door and put a wire grid over it so they could see outside.  First we had to change the fence.  We got that done yesterday morning and let the girls out.  They are very cautious at first but it didn't take long before a fair number were scratching around and had made themselves a dust bath, and were picking at the greenery.  Being young and foolish, every once in a while there would be a squawk, and one chicken would suddenly fly up and over a little distance, which seemed to get quite a few of the others doing the same thing.  Inevitably a few went over the fence, but they were easy enough to get back in. 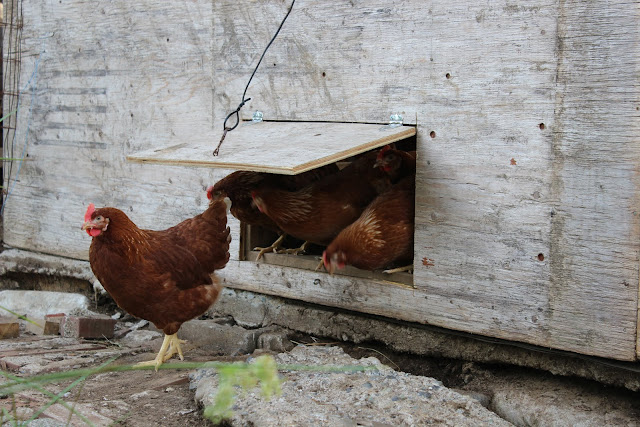 We left the door hanging at an angle as a roof. 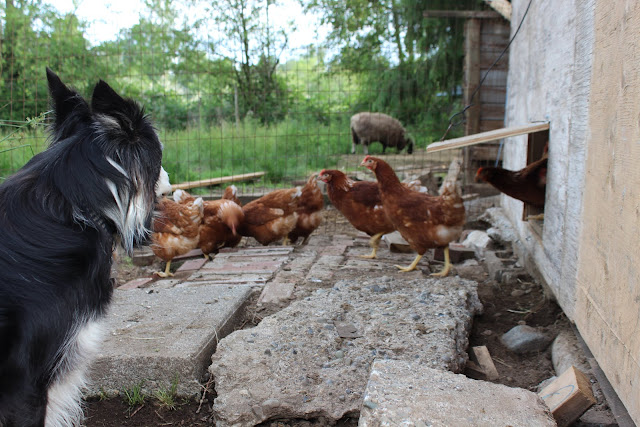 We got a nice surprise yesterday, we got three little eggs, and again today.  I had looked on the internet for options for nest boxes.  Sure we could have built some wooden ones, but that involves so many little pieces of wood and fastening it all together.  I saw lots of different ones, but one caught my interest.  You know how you have some of your best ideas while laid awake in bed?  So I got thinking, and remembered all these wooden boxes/drawers that we had.  Something I had seen on Craigslist a number of years ago, back when I first discovered Craigslist, and I dragged Larry all over the countryside picking up various 'bargains'.  I don't remember actually having a plan for these boxes, but quite a few of them were used in the shop by David to store some of his tools and stuff in.  So as I was laid in bed, I wondered if some of the boxes would work with some of the dollar store bowls (do you call them bowls when they are rectangles?).
Well honestly, when I put the two together, it couldn't have been more perfect! And then I found I had the perfect little metal slides that the plywood dividers fit into. They were from a previous 'shelves in the closet' project. 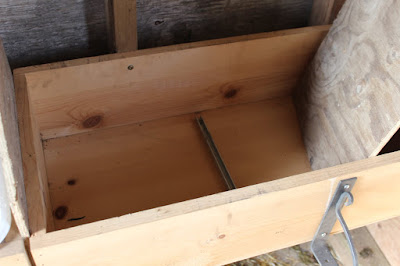 Already the right length with two holes drilled in each one, just what I needed to screw them to the bottom of the box.  The advantage of using the bowls is that if the nest box gets messy, you just lift the bowl out and dump it and give it a rinse and it is all clean again.  And the nest boxes do get messy.  Eggs get broken, or hens poop in them.  So that was my project yesterday and this morning.  There is a roost for them to fly up onto to access the nest boxes, and if they want to roost there overnight, that is fine too.  We don't want them spending the night in the nest boxes, so if that happens, I've got a plan for that.  And guess what, a hen laid her egg in one of the nest boxes this morning!  The other two laid theirs on the floor, but I think they will figure it out.  I hope so.  And the beauty of these nest boxes is that you don't have to bend over to collect the eggs.  I am thrilled with how it has all turned out! 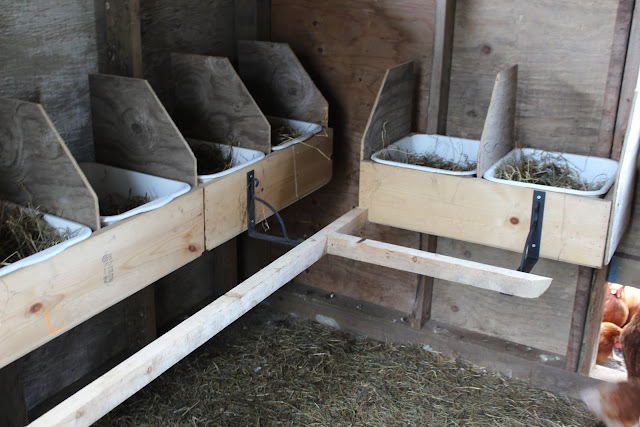 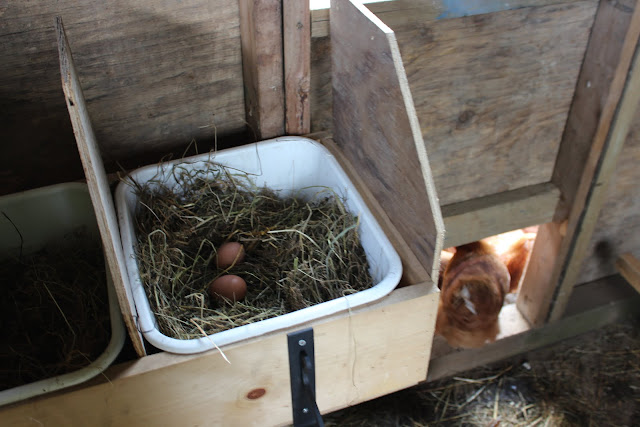 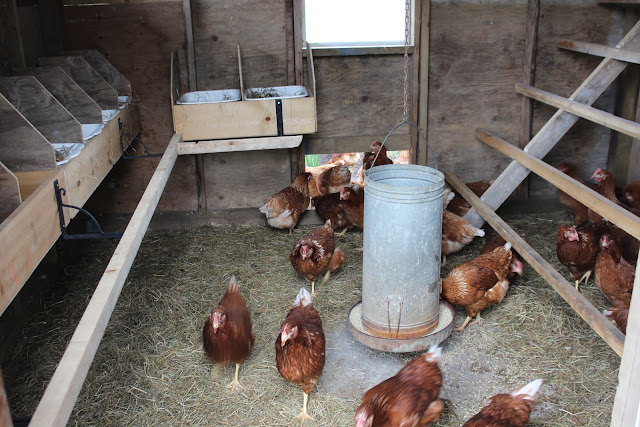 We did get them a roosting ladder made for last night, but they haven't used it yet.  It takes a while for them to change their habits.  They lived in a big barn up to this point, and I'm assuming had no roosting areas, as they all just huddle together on the floor at night.  They will figure that out fairly soon too. 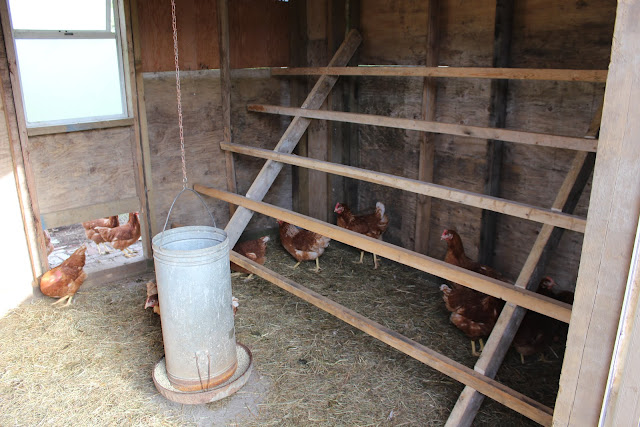 There is still a ton of work to be done.  All the cleanup of the wood from the old barn that we didn't use.  The leanto to finish.  Clean up/changing of the bricks and slabs of concrete on the west side of the barn.  One of these days it will hopefully look kind of cute.
In my mind it does!