My knee has been bothering me quite a bit. When I first went to see the doctor about it, he had put in a request for an MRI, just in case I might need it.  Since the waiting list was so long, there was lots of time for me to cancel it.  I did get an appointment, for January of next year!  Good grief, really?  Anyway, apparently the powers that be decided it was time to get rid of the wait list for MRIs, so they are now running pretty well 24 hours a day across the province.  There must be an election coming up soon! I was on the cancellation list, and I actually missed a phone call from the hospital at the beginning of May.  Then I got another call less than two weeks later, and I was booked in for a 9pm Saturday evening appointment.  Since I had never had an MRI before, I was sort of looking forward to a new experience.

My first thought was that 'oh wow, is it ever quiet in the hospital at that time of night'.  A bit creepy in fact.  Anyway, I was given a questionaire to fill in, was asked some questions (was I claustrophobic?). I didn't think I would be, and then I was informed that my head and neck would be out.  Now I was imagining slowly being slid into the big tube, some quiet humming of the machinery for a few minutes, and then it would be all done.  Then I was told that it was quite noisy, and I would be in there for 25 minutes.  I was handed some foam ear plugs, but I didn't get them in very well because they sure didn't do much for dulling the noise.  Wow, noises like horns blaring and a hammer drill, then it would go all quiet and then start over again.  I was determined that I was going to lay perfectly still, and I did, although I had to fight the urge to get a bit twitchy at one point.  All done and then it was just over a week later before I got back in to see the doctor. 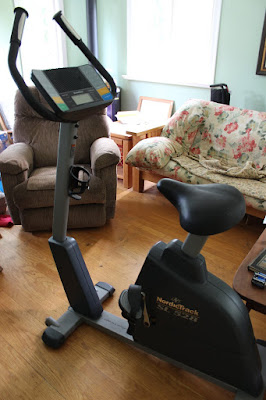 The verdict was two tears in the meniscus (the big cartilage between the upper and lower leg bones) and some sort of floating knee junk. To make a long story short, I was a candidate for arthroscopic surgery.  The doctor asked me how the knee felt, and I told him it felt the pits.  He was typing away at the computer, so not sure if he used those exact words.  I said that it felt like I had a wooden leg, and the joint wasn't functioning properly.  I did have good days and bad days, but when I saw the doctor I was in a stretch of bad days and was feeling particularly fed up as I limped into his office, and said I just wanted it fixed.  So I have an appointment to see the surgeon at the end of July.  The next day I was at the chiropractors.  I told him about my knee.  He said to get myself a cheap stationary bike, and to ride, ride, ride.  He told me how another patient of his had managed to avoid surgery by pedaling, a lot of pedaling.  He made the comment that although it is a minor sort of knee surgery, once they have been in there, the knee is never the same.  The best option would be to avoid surgery if possible.  Sooo, since the doctor had also asked me if I had a stationary bike the first time I went to see him, I decided to see what I could do for myself.  So on to Craigslist I went, and I found my new friend about 25 minutes away for $50.  Off I went to pick it up.  That was a week ago.  My aim is to ride 10 miles a day on the bike.  I'm not meeting that goal, but have ridden 60 miles since I brought it home last Thursday.  I must say that my knee has felt pretty good the whole time.  I haven't had the 'wooden leg' feeling at all.  I think the theory is that the constant gentle repetitive motion helps to smooth things out.  We will see.  Fingers (and knees) crossed!

And back at the farm, those new hens are squawking right along.  Six eggs today, and five of them were laid in the nest boxes.  What smart birds!  The one in the middle is announcing to the world that she has just laid an egg.  The one of the right is joining in to spread the good news, but she hasn't laid her own yet.  Sometimes the whole flock of hens has to shout it to the world altogether. And people complain about roosters being noisy.....huh, they have no idea....!

My theory is that the hay picking is to help cover or camouflage the egg.
Looks like a case of the hay being better on the other side of the divider.