Twenty Eight years ago, a year or two after we moved here, we built a sheep barn.  It was about 10 x 10, kind of a pole barn, solid walls about 4 ft high and open above that.  It was built on four concrete blocks, 4x4's on top.  When we added on to our house and the concrete floor was poured,  the excess concrete at the end of the job was spread around in the sheep barn, which just had a dirt floor and tended to get wet in the winter.  And then when we concreted part of the big barn, the same thing happened again.  At some point I decided that the sheep barn wasn't big enough, so we added a lean-to on at one end and opened up the wall to make it all one bigger area.  The sheep rubbed on the walls, and over the years the walls got pushed out at the bottom, the concrete blocks sank unevenly into the ground, and the sheep barn was starting to look a bit sad.  Fast forward to the present, and we are down to one sheep (who David's girlfriend has named Ramona) and a lot of chickens.  The chickens from the coop in that field like to hang out in the sheep barn.  We talked on and off that it would be nice to make it into a chicken coop.  David even started to fix it up at one point, but didn't get very far.  The walls were so pushed out at the bottom that it was almost an impossible job to renovate it as is was.
About a month ago I bit the bullet and made an executive decision that we should just take it down and start from the ground up.  I suggested one day that the three of us go out and spend an hour and start taking it apart.  In my optimistic way I thought that it would only take us a couple of hours to demolish it. Ha, wrong, wrong, wrong.  David and I worked on taking the metal sheeting off the roof.  That just seemed so appropriate, since I remember being pregnant with him and being up a ladder and putting that roof on.  Larry worked on the walls and on taking the hay feeder apart. 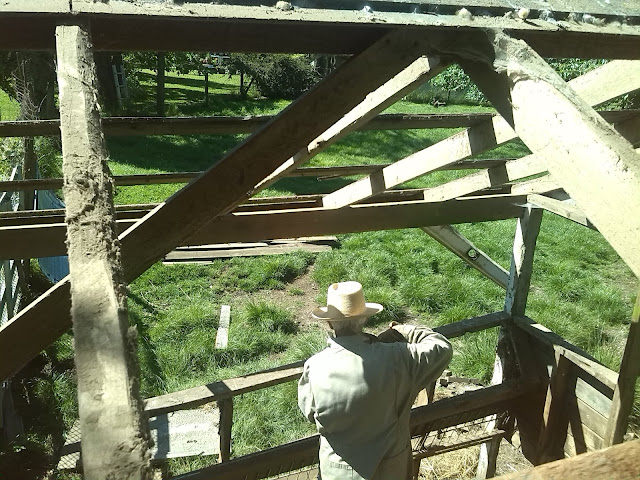 I'm actually surprised that the ridgepole looked so straight.  The wall on the right end of the barn below was a disaster. 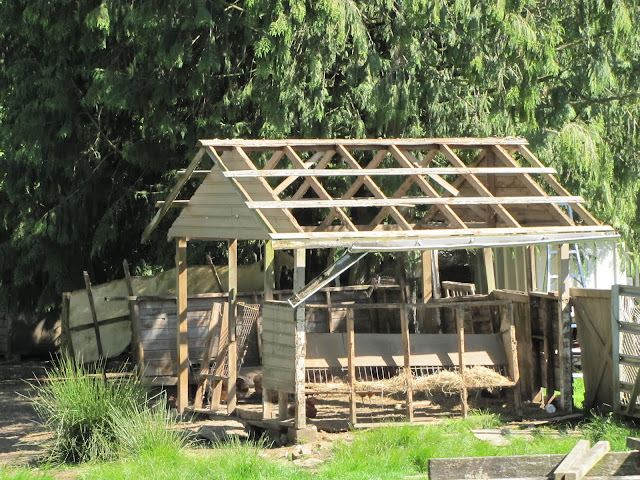 Larry picked away at it, and then David helped again another day, all three of us were out there again, and we got the rest of it down.  Then we had to clean off the concrete of layers of sheep muck and hay that were almost like rock.  The pick axe and tractor came in handy.  I pressure washed the concrete off, and also the assortment of paving stones and random concrete bits that made up the floor in the lean-to.  The concrete floor was bad, the two lots of concrete weren't the same height, the whole floor hadn't been done, parts were missing.  We bought some bags of ready mix and dragged out my dad's old cement mixer.  Amazingly the motor still worked.  For some reason we were doing the concrete after dark, by the lights of the car and one trouble light, as well as a couple of flashlights.  We dumped a bag into the mixer and it won't turn. WTH?  We spent a lot of time trying to figure out why, but can't.  We dump the concrete mix into a wheel barrow and mix it in there.  By this time it is about 10:30 pm.  Our horsey neighbours across the road go to bed early.  We are making a heck of a lot of noise scraping metal on metal as we shovel the cement mix around in the metal wheel barrow. It brought back memories of me working for my bricklayer dad as a teenager.  I mixed a lot of cement, first on a big plywood sheet, and then eventually Dad bought the cement mixer.  Anyway, the floor got fixed up sort of (we still have to mix a couple more bags to fill in a low spot) and set enough overnight that we were able to work on the barn the next day.  We made the biggest rectangle we could on the concrete pad that we had to work with.  We had a lot of treated 4x4's that we got for free, so made good use of those.  The chicken coop is about 9.5' x 10'.  The walls are 6.5' high.  It is really well built.  Larry used to work in construction waaaaay back when.  I've worked with Larry on enough construction projects around here, that I mostly know what I am doing.  We had quite the arguments discussions on how things should be done.  For the first while we seemed to go two steps forward and then 2 steps back as we ripped out things and did them differently because we hadn't done it right in the first place.  This coop is solid, and heavy duty, and would make a really nice little workshop for someone.  If we were being paid for building this coop, it would have cost someone a fortune.  We are that slow.  But now the pressure is on.  We have to pick up 45 new hens on Monday.  So far we haven't had to buy much in the way of materials.  We've managed to use what we could salvage from the sheep barn, stuff we have had 'stored here' and some lumber that a friend gave to us.  A while back David bought a stack of half sheets of OSB board that used to be the tops of pallets, for $1 or $2.  We decided to put those on the roof under the metal.  We had a discussion about how to space the rafters to make best use of the half sheets.  I scribbled a drawing, Larry made a fancy one, and then he went out to work on the rafters while I made the jam I was supposed to make the day before, but didn't get done because I needed to go out and help with the coop.  I looked out and wondered why the spacing between the rafters looked so weird.  Larry pulled out his diagram and explained it to me, and I said that didn't make sense to me, that wasn't how I had planned it, we had a 'discussion' and since they weren't nailed down yet that spacing was sorted out and was much better, in my opinion:-) 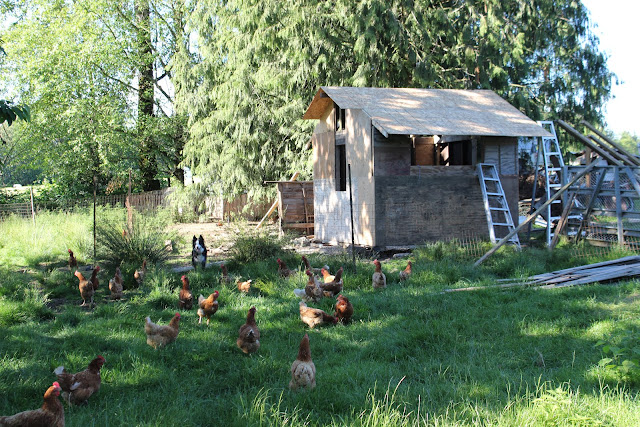 Anyway, by the end of today the roof is covered in OSB, I had started to put some tar paper on it, and the metal will go on first thing tomorrow.  I haven't made that mango chutney that I promised someone for Sunday, so I MUST get that done tomorrow.  You can be sure I will be keeping an eye on Larry working on the coop from the kitchen window.

And just because....
A Mexican duck in with the flowers. 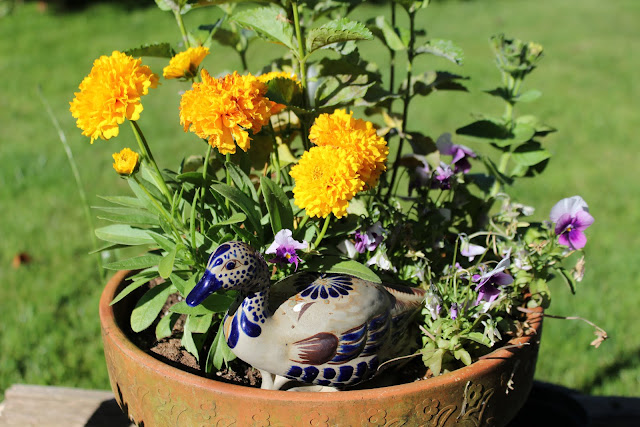 One of my mum's African Violets.  It was such a mess when I brought it home.  The leaves were all horribly spotted, and the flowers were long gone.  I'm pretty hopeless with indoor plants, but I'm pretty pleased with how this one is doing.  Mostly all new leaves, and it has rebloomed!  I know that A. violets don't like water on their leaves and don't like direct sunlight.  This one is in an east facing greenhouse window, somewhat shaded by a jug of kitchen utensils.  It must like it there. 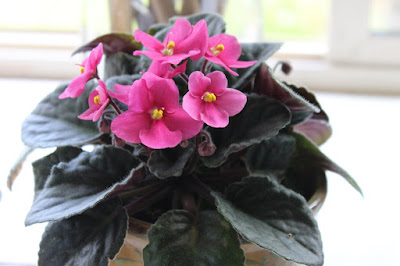