They say to have a shower after you have been in a tick area.  Well a fat lot of good that did me (previous post) with the one I found crawling in my hair.  It must have been hanging on tight to not get swept down the drain.  So after we got back from the Okanagan, I was checking the dogs for ticks pretty well every day.  After a while when I hadn't found any, I figured (thank goodness), that we hadn't brought any back.  And then on Friday afternoon Larry was giving Jake some attention and informed me that there was a bump.  And it was a tick with a death grip on his skin.  So I got the tweezers and got a good hold on it and pulled and pulled until it finally came free with a chunk of Jake's skin.  He didn't seem bothered.  The weirdest thing was that under the bloated tick was another tick, that hadn't yet started to feed.  Very strange.  Anyway, didn't find any more on Jake.  Then it was Luna's turn.  I found these three on Luna.  All of them were just to the side of the spine, near the shoulder blades or back a bit from there.  Calli didn't seem to have any.  We had been back nine days from the Okanagan.  That seemed a long time to me, too long.  But, I looked them up and they appear to be Rocky Mountain ticks, which one site said were not found west of the coast mountains. If that is true, although I wonder with climate change and all that, they must have been on the dogs all those nine days.  Gross:(

When we were at Oliver I did notice some rather large spiders.  This one took the cake.  It may have been the same one I saw earlier on the front of the house, but it disappeared down into the flowers before I could show it to Larry.
Here it is crawling up the hand railing to the front door.  That is a honey bee it has a hold of.  I think the bee was still moving a bit when I first saw it.  That gives you some idea of the size of the spider. 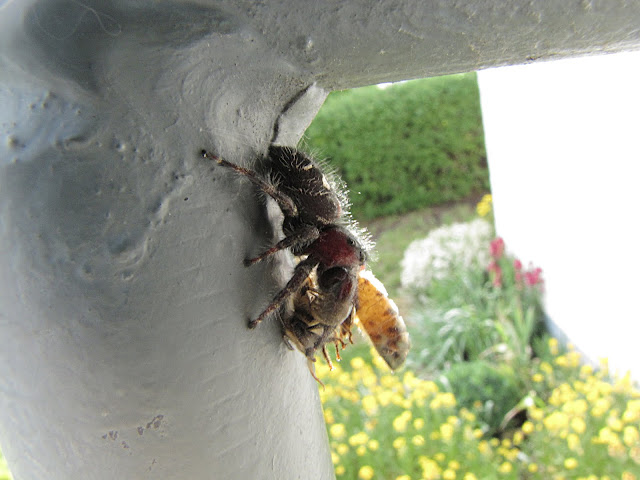 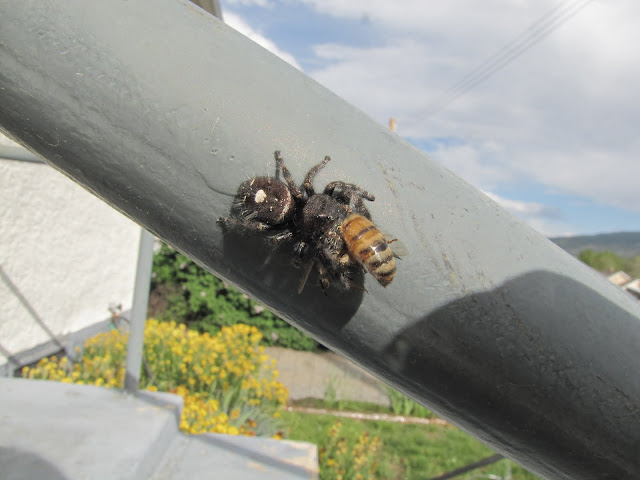 I couldn't really get a decent picture.  The thing made me think of a mini tarantula.  I was using that orangey cloth to try keep the spider in position on the post.  It just seemed like it wanted to hang out under the corner of the railing.  I looked up spider pictures but didn't find anything that matched. 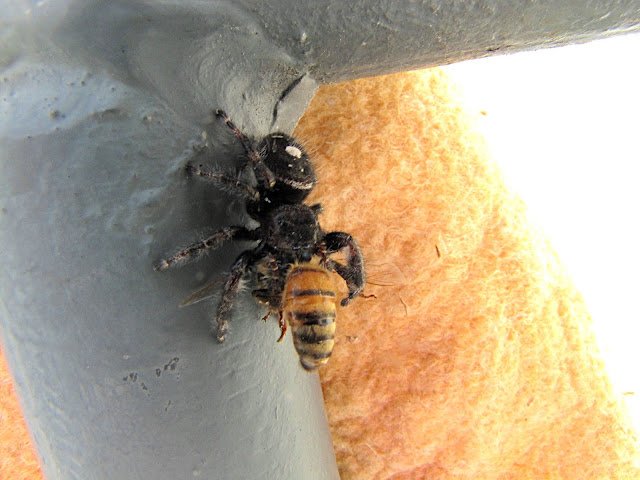 I think the ticks freak me out more than the spiders.
Excuse me for a moment while I go check that itchy crawly feeling on my back.

In other news, I went for a run with Meredith the Friday before last.  My knee seemed okay while running, but afterwards kind of felt like it was back to square one.  Bummer! So I'm giving up on the running for a while, and am resorting to bike riding instead.  Which is okay because I actually like that better.  I'm trying to do it on a schedule, trying to maintain the fitness level I had reached.  This morning both Larry and I went out together, and rode 8.5 miles.  We saw a couple of interesting things.

This is the gate to a residence.  We couldn't actually see the house, but if it matched the scale of the gate and stone wall along the front of the property, it must be enormous.  I just have to ask 'why?' 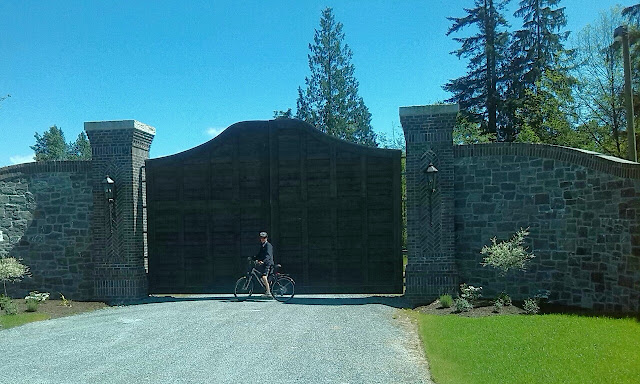 We saw a few of these signs. 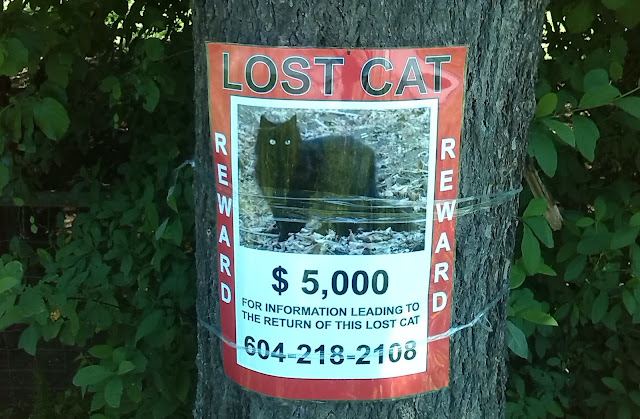 $5000 Reward?  That boggles the mind.  The other thing was that the cat was a spitting image of Nelson.   One of the signs said 'never give up hope' at the bottom.  So my mind got working overtime the way it does sometimes.  Did 'never give up hope' mean that the cat had been missing a long time?  A very long time? As in 10 years?  My mum adopted Nelson from a shelter less than two miles from where I saw one of the signs, ten years ago.
I wonder if I can get up the nerve to call the number.
Do I want to call the number?
That would be just too weird....

Oh yeah, on Thursday when we were out on our bikes, we saw an air conditioner sitting in the long grass at the side of the road.  It was still there on the way back, so when we got home we jumped in the car and went and back and picked it up.  It was dirty and looked like it had been sitting somewhere for years.  What the heck, we had nothing to lose, and maybe an airconditioner to gain.
We plugged it in and turned the fan on, which started up and then stopped.  It sounded like it had got caught on something.  Another day passed and I took the cover off and got some grass out of the fan area, and managed to haul about eight Trivial Pursuit cards out of there as well.  Plugged it in again and the fan worked fine and the cold air did too.
So today I got the air compressor and blasted all the junk out of it (as well at four more Trivial Pursuit cards) and wiped down all what I could with a damp soapy cloth.  It seems to work just fine, so will maybe try it in our bedroom window one warm evening.
That's me, Ms. Junk collector.
You just never know what you might find!