We had one heck of a storm come through on Thursday. Very high wind gusts in the early morning. I was laid in bed listening to the wind roar, and all of a sudden there was a loud crash close by.  I figured a large branch had come off the evergreen nearest the northwest corner of the house. That's a tree I don't worry too much about in a wind, because our strong winds almost always come from a southwest or southeast direction, and if that tree was going to go over it would fall away from the house.  Good thing, since our bedroom is at that corner.  Nothing big I could see in that direction, but when I looked to the southwest, there was a massive branch off the maple tree by the gate, resting on the power lines and a hedging cedar along the driveway. 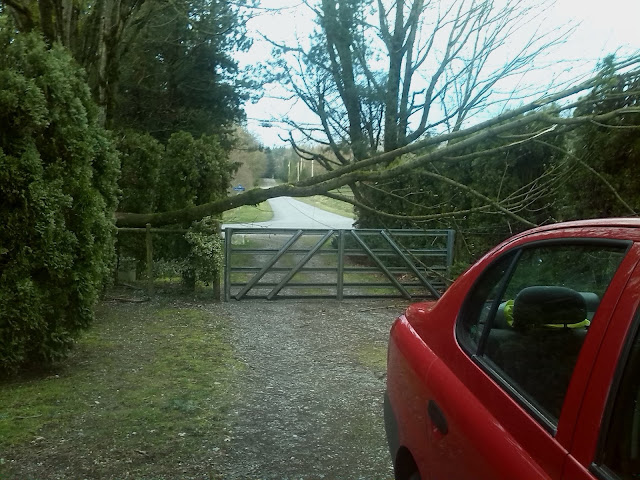 A couple of other things had sustained damage too.  This was a market tent that I had left up over the potting bench. The leg at the back left was still in it's original spot, but the tent had pivoted on that leg about 180 degrees, and there were all sorts of broken trusses.  I'm not sure if I can make it usable again.  So bizarre, because the last big storm we had in the summer, that tent never moved. I had a roll of bags hanging under it, and that had unrolled to make a long garland waving in the wind. 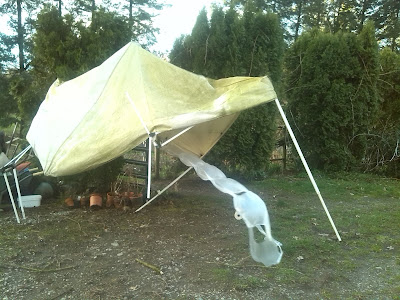 And the Costco canopy that we had over our old 5th wheel trailer hadn't moved then either, but this time it was toast. Stuff around it had crashed over, and the roof tarps all ripped, and the frame had come apart in many places.  I think the frame is salvageable, but the top certainly isn't. 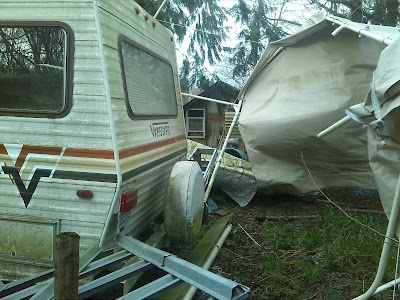 So the first thing to do was to get the branch off the power line before it broke it. Larry was going to go up the ladder with the chainsaw, but it is really hard to maintain your balance while maneuvering the saw.  Since the branches were relatively thin(ish), and he is still supposed to be staying quiet after the eye surgery, I went up there with the loppers and the pruning saw and was able to cut the branches back from the line.

Somewhere along the way, my sister visiting from Ontario was rudely awakened by the sound of the chainsaw and thought she must have really overslept that morning, and then was shocked to see it was only just after 7am.  Our power was still on at this point, but she saw something weird happen with the clock radio in her room, and then there was a poof and a spark and a burning smell and the clock radio died.  Shortly after that the power to the whole house went out. 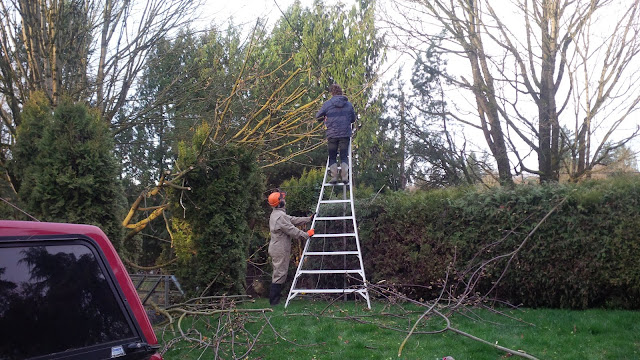 The wind was still gusting wildly, so while Larry sawed, I watched to make sure nothing was going to fall on him, and he didn't saw while I was pruning, because I wanted to be able to hear the crack if another branch decided to come down.

Then we had a disagreement discussion as how/where to place the tractor to take the weight of the branch, and not manage to break the Shaw line (our internet) that had been partially ripped from the wire along the road, and was hanging low over the driveway. 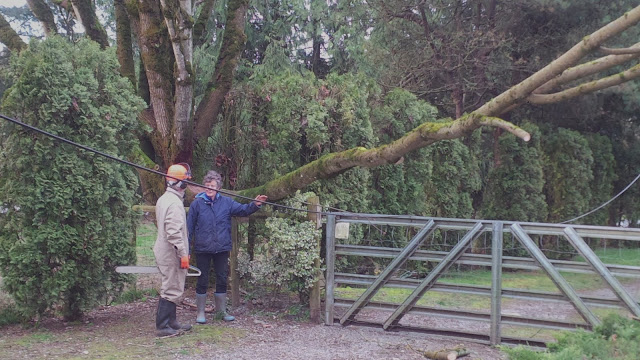 Concentrating on getting the tractor in the right position.  Looks like the front tire needs a little air! 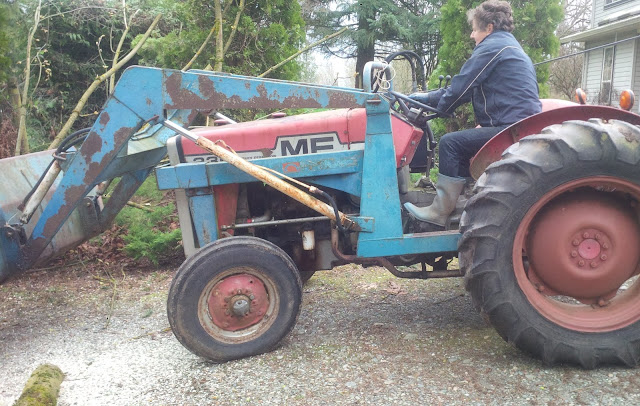 We eventually decided to do it my way agreed and Larry got to work with the saw. 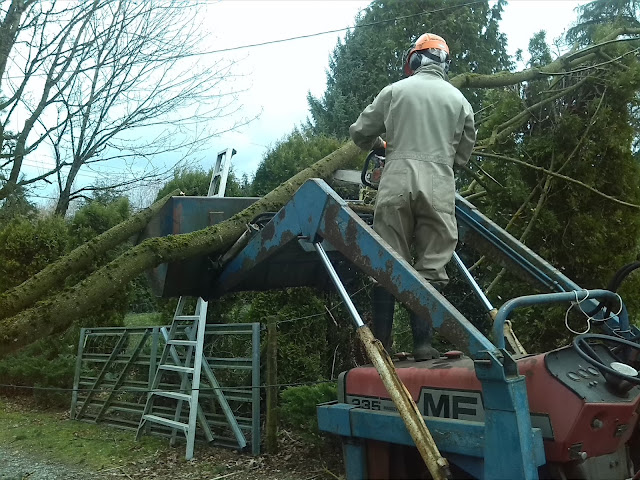 Cathy help to pick up wood and load it in the tractor bucket.  I split some of the smaller stuff, but the bigger rounds need to dry a bit first. 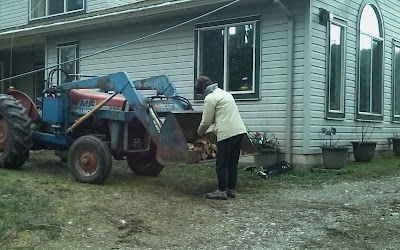 I checked with the neighbours, and their power was out too, so I knew the branch on our line wasn't the main problem. 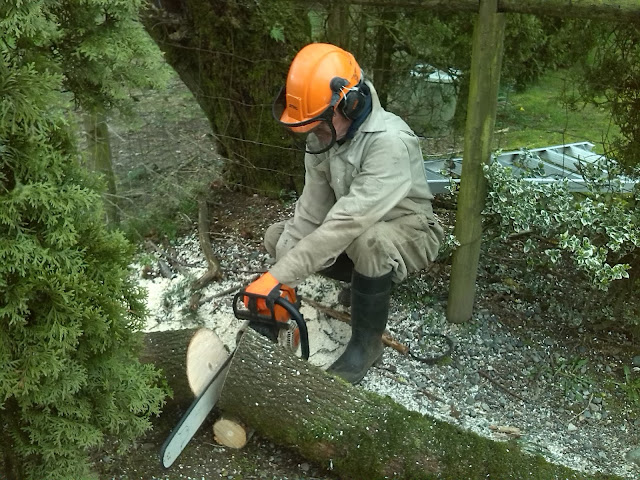 The power came on that evening, about 11.5 hours later.  But things were kind of weird.  Some lights were really orange coloured. Some lights were extra bright.  Some lights blew out.  The surge protector on the computer just kept beeping and wouldn't let the computer be turned on.  We invited ourselves over to Meredith's for supper, and left most of the lights off when we went out. (In hindsight we should have stayed home, or turned all the power off).  When we got home, things were still weird.  A bit scary in fact.  We turned the main breakers off overnight.  In the morning things were still the same.  I got on the phone to BC Hydro, and of course because there were power outages everywhere, the wait to actually speak to someone was about 40 minutes.  She told me to go and turn all the individual breakers off, and then turn them back on, one by one.  If that didn't work, to call back.  It didn't work, so we left Larry holding the phone while we went with the dogs round the bush.  Not much damage out there, but another half of the maple tree that had come down with the summer storm, was now on the ground as well.  When we got back Larry said our problem was reported, and now we just had to wait for a crew to show up.  When we were out driving, there were crews still working all over the place.  Early this morning, while it was still pitch black,  I was woken by voices.  They were just down the road from us, but I couldn't see anything.  Shortly after diesel trucks started up and pulled out, and I looked out of the window again and they looked like electrical type trucks, but I didn't think they had done anything to help us. (Surely I would have heard them if they had been working at the bottom of our driveway. The bedroom window is wide open at night)  This morning Larry noticed that a small branch that had been hanging on our power line was gone, and when we walked to the bottom of  the driveway to look there were a few tire tracks in the shoulder.  What a wonderful feeling when we came back in and turned on a few breakers to see what would happen, and everything seemed to work.  The freezers all started up again, what a relief because when we had turned on those breakers yesterday to try get them to run for a bit, nothing had happened.  There are a few bulbs to replace, but otherwise it all seems good.

My sister pointed out that the last time she was here, we had the massive storm when our power was out for 30+ hours in total. Her last two visits here have coincided with the last two big storms we have had.  They say things come in threes, and Cathy is coming back in the summer.....