The Boys go on Holiday

When my sister was planning to come out to visit, I told Larry that we were going to go to Oliver for a couple of days.  I guess he was feeling a bit left out (of the Oliver part) so he said that well he was going to go up there by himself.  After his endothelial cell transplant eye surgery scheduled for the end of May was cancelled due to lack of donor tissue, I said well on the upside, you can still drive yourself to Oliver.  I encouraged him to take a dog for company, with Jake being the obvious choice.  So they set off this past Tuesday on a hot day.  The hot day got hotter as they approached the Okanagan, so they stopped at a rest stop that came with a lake, and Jake got to swim.  Despite me having sent a camera along, (just turn it on, point and focus), pictures were kind of limited.

While in Oliver, Jake got a couple of good walks down the dyke. 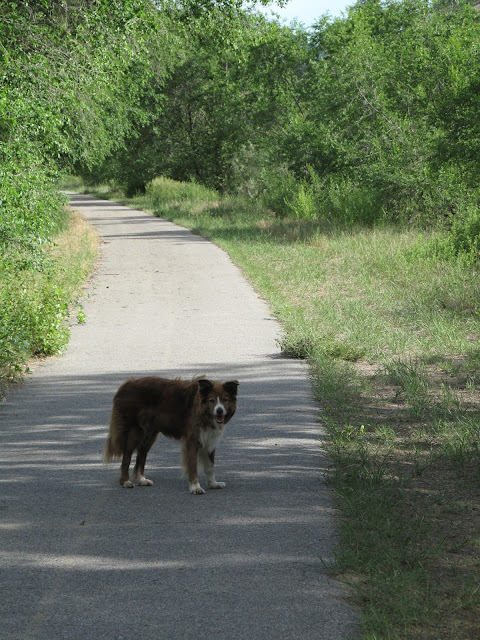 The sky was kind of interesting one day.  Maybe that was Thursday morning.  Larry had decided to come back on Thursday, I tried to convince him to stay another day, but he said he was restless and had decided he was missing me.  Awww! 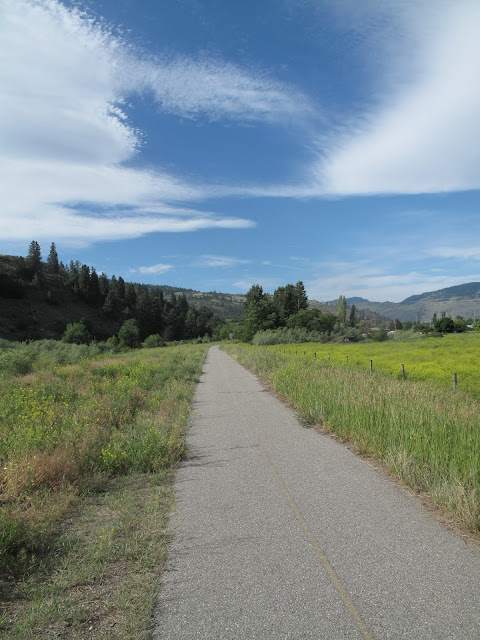 We walk this dyke a lot.  Basically flat so it is easy for Calli, and wide open so I get good notice of other people and dogs that we are going to run into.  I like to be prepared with Luna.  It follows the Okanagan River, which has been channelled.  Along the way are what they call VDS or Vertical Drop Systems, and what we call weirs.  There is a pedestrian bridge at each one, which makes for some nice loop walks.  The Hike and Bike trail is paved for a good length close to town, but if you cross to the east side, the dyke is unpaved and more 'wild'.  Just recently, the powers that be have decided at a couple of weirs to make ramps directly from the dyke to the bridge. Before, you had to scramble down the dyke slope, up the concrete steps, and then do it in the opposite order at the other end.  A bit awkward for bikes and dogs in carts, and impossible for people in wheelchairs.   One of the ramps is at a weir we cross often, so that's kind of handy.  Jake is the first of our dogs to test it out. 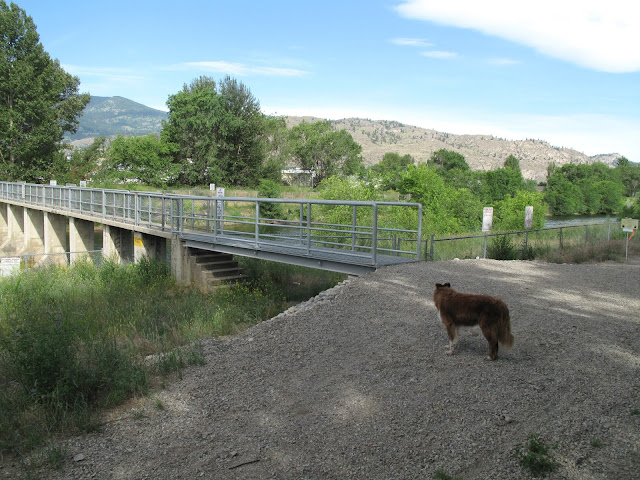 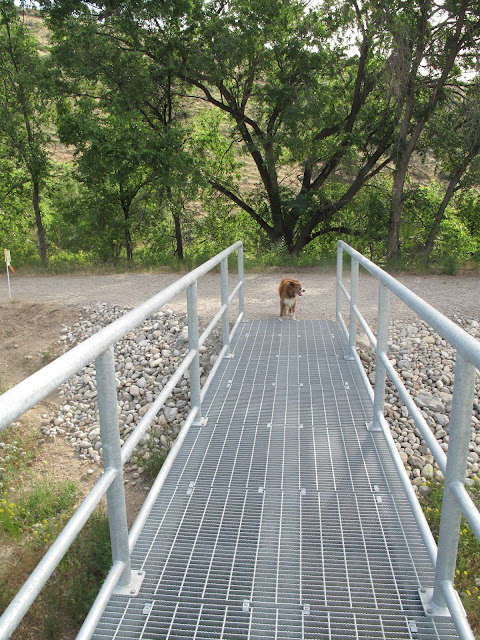 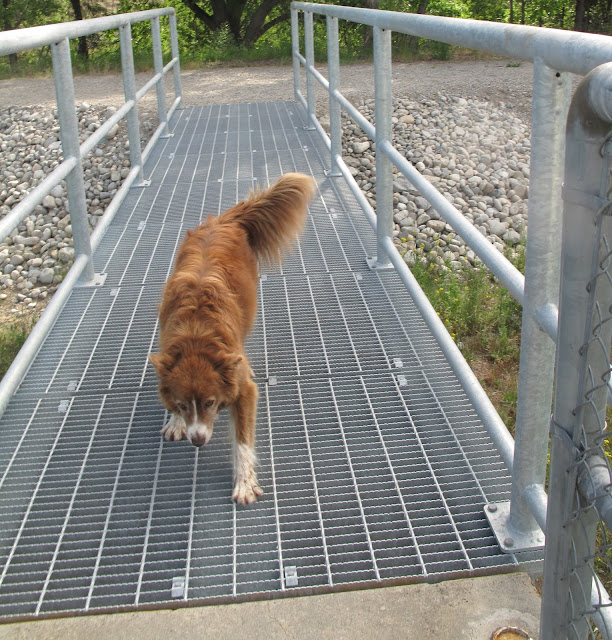 Oh my gawd, I have to cross one of these scary things again at the other side.... 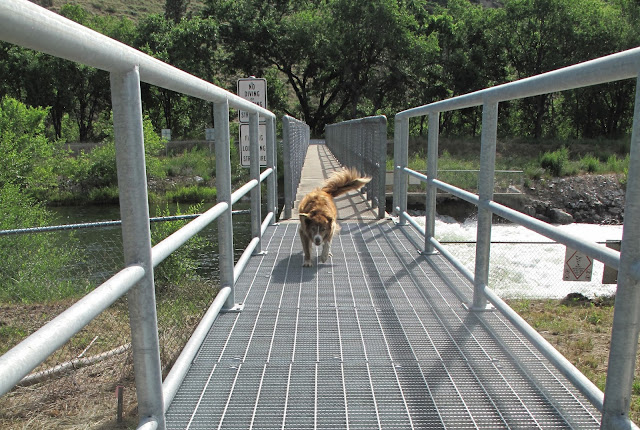 Larry said the river was really running high and fast.  You can see how the water is roaring after it has come over the weir, on the right side of the bridge.

Back at the cottage, the squash along the fence are coming along just fine.  Larry had to ease the branches back through the fence that were heading into next doors.
Larry didn't see anything of those neighbours, and neither did Cathy and I when we were there. 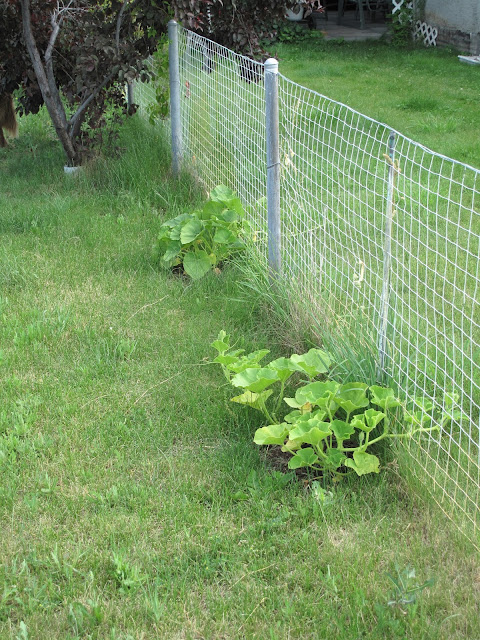 I planted a few in the vegetable garden.  This is the only one he seemed to notice, which has grown hugely.  I can't imagine that the others have croaked in the two weeks since I've last been there, so hopefully there are a few more in there still.  The weeds are coming up too.  He said he thought about weeding , but didn't. (Phew, let's out a sigh of relief).  He didn't notice the three pepper plants in there, although he did seem to notice the sunflowers that had come up. 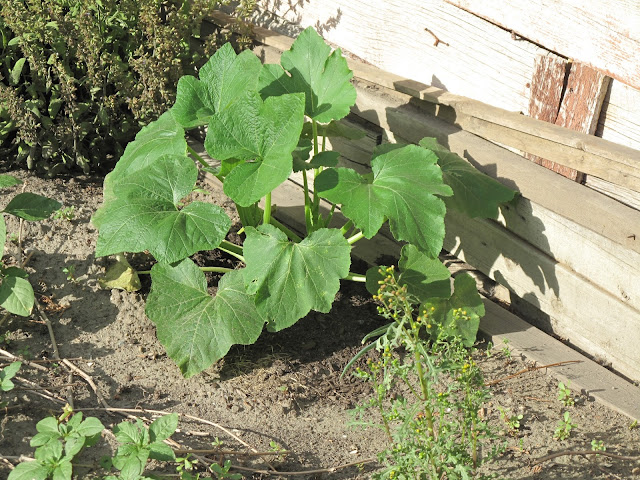 Meanwhile, back at the ranch, I was quite looking forward to a few days on my own. It was all good, until late Tuesday afternoon.  I was making jam, I started to feel not so well.  I got the jam finished barely, before a terrible case of food poisoning hit. (My best guess, but no idea what from)  I was either in the bathroom or on the couch all evening.  Luna was shut in the basement with Calli (because I was making jam) and I could not get down there to feed them or let them out.  I was getting worried, as there were chickens to shut in and eggs still to collect.  I considered taking my chances and getting out there early in the morning for the eggs, and just hoping that that wasn't the night that any predators decided to wander by.  After 10, I had to stagger to the bathroom, and knew I'd  feel a bit of relief after that, so grabbed that opportunity to feed the dogs and head outside to the chicken coops.  By the time I was collecting the eggs in the second coop, (maybe it was all that bending over?) I thought I was going to pass out.  I left a large deposit out there, which made me feel better again, so I managed to get the chicken/eggs finished and the dogs toileted.  After that, other than some pain about 3 am, I was okay, and the next day was fine, other than feeling a bit washed out and low energy.

This was the longest Luna and Jake have been apart.  It was kind of interesting at my end. Even though only one dog was gone, it seemed like more.  Makes me realize Jake makes most of the noise, and is the better farm 'watchdog'.  Luna would hear the chickens cackle a lot, give one woof, go to the back door, I'd open it for her and she'd just stand there looking because her buddy Jake wasn't out there on high alert, barking at the fence.  When he got back, she was happy to see him.  When she is the one that has been away for a few hours, she can be bitchy to him when he fusses us around her, giving her the 'where have you been' smell over.

And then on Thursday Larry said he was coming back, which I was a bit disappointed about because I'd lost half of my 'alone time' being sick.  Anyway, it all worked out for the best, as I was informed by a reminder phone call that he had an appointment for a barium xray at the hospital at 7:30am on Friday.  The day before I had got a message to say to phone about an appointment, but no mention of there actually being one.  After I dropped him at the hospital I went grocery shopping and there ran into Granny Marigold and her husband.  We chatted a bit and she mentioned me not blogging much lately, I said I'd been planning on posting something for the last week and a half, but she was the little kick in the butt that I needed, so you can thank her for this post!