I wrote this post last week, and never got it quite finished, so never posted it.  So here it is now, a week late.  Unfortunately in this past week, nothing more has been done with the dahlias.  I am easily distracted:)  Some great cleaning up and sorting out of other things has been done though!  Those two wheelbarrows are still hogging a lot of room in the garage, as are the bins.  That cold weather that I mentioned we were expecting, with it's inch of snow, came and went.  We are back to rain and weird collapsing ground as the ice in it thaws out.  Anyway, here you go....just imagine you were reading it on Friday of the previous week.....

Since I've come back from Ontario, I've been working at getting the dahlia tubers out of the ground, cleaned off, divided and stored away in feed bags until next Spring.  We had some cold weather while I was away, so the foliage was all killed off. That's over 100 dahlia tubers to dig up and cut the rotting dead foliage off. It's been a heck of a job, and it's not anywhere near done, but at least all of the tubers are out of the ground now, and washed off, and in the garage where there is no chance of them freezing. Larry has helped me with the digging and cutting the rotten stems off.  We've got some cold weather coming in the next few days.  I don't know if it will be cold enough to freeze the tubers in the ground, but there is a good chance, as we have had a week of lots of rain, and the ground is saturated.  I dug up the last 20 or 25 this morning.   Thank goodness they were all fairly small ones, so it was easy.  Some of them have been monsters, probably weighing 25 lbs, all loaded up with wet soil and umpteen earth worms.  Last year I don't think I washed them, I think I had some nice mild weather to get them all sorted out, but it has been different this year.  So I've loaded them up in the wheelbarrow and used a nozzle on the hose to blast most of the dirt and worms out from between the tubers.  Then I'm letting them dry off for a few days, and then will divide them up.  There seems to be too many that aren't labelled, I'm not sure why.  I know some were labelled wrong.  Not sure what I can do about that, other than to write a note (on my forehead maybe?) to check them all next year when they are blooming.  I have to come up with a better way to tag them.  I had tied flagging tape around the tuber, but often as the tuber grew, the tape was buried in the middle of the clump, and I had to try and ease it out gently and try to read it.  Often I couldn't even see a tag until I had hosed the dirt off.

I'd like to plant them in a different spot next year, in a single row along a fence line.  That will involve a lot of work to prep the ground, so we'll see how that goes.  Probably won't go well, it will be too physical.  I think it might be too much to try to get our little rototiller to break through sod that has been here longer than us.  I've thought about it quite a bit, and have a few ideas, but it remains to be seen if I put them into action.

Here's today's and yesterday's haul in the yellow wheel barrow.  The other wheelbarrow is from earlier in the week. 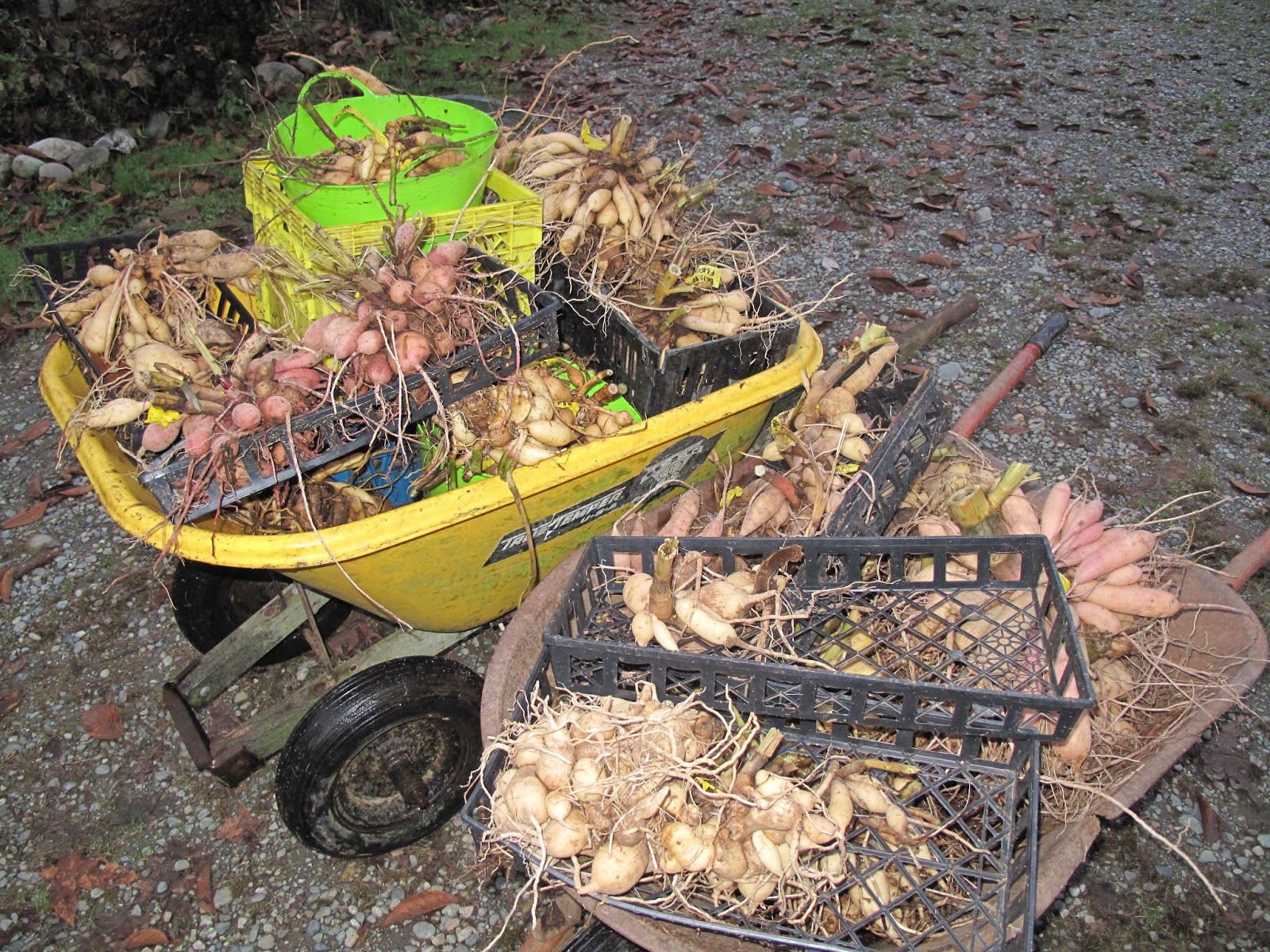 Here's some more that have been in the garage for a while and are waiting to be divided. 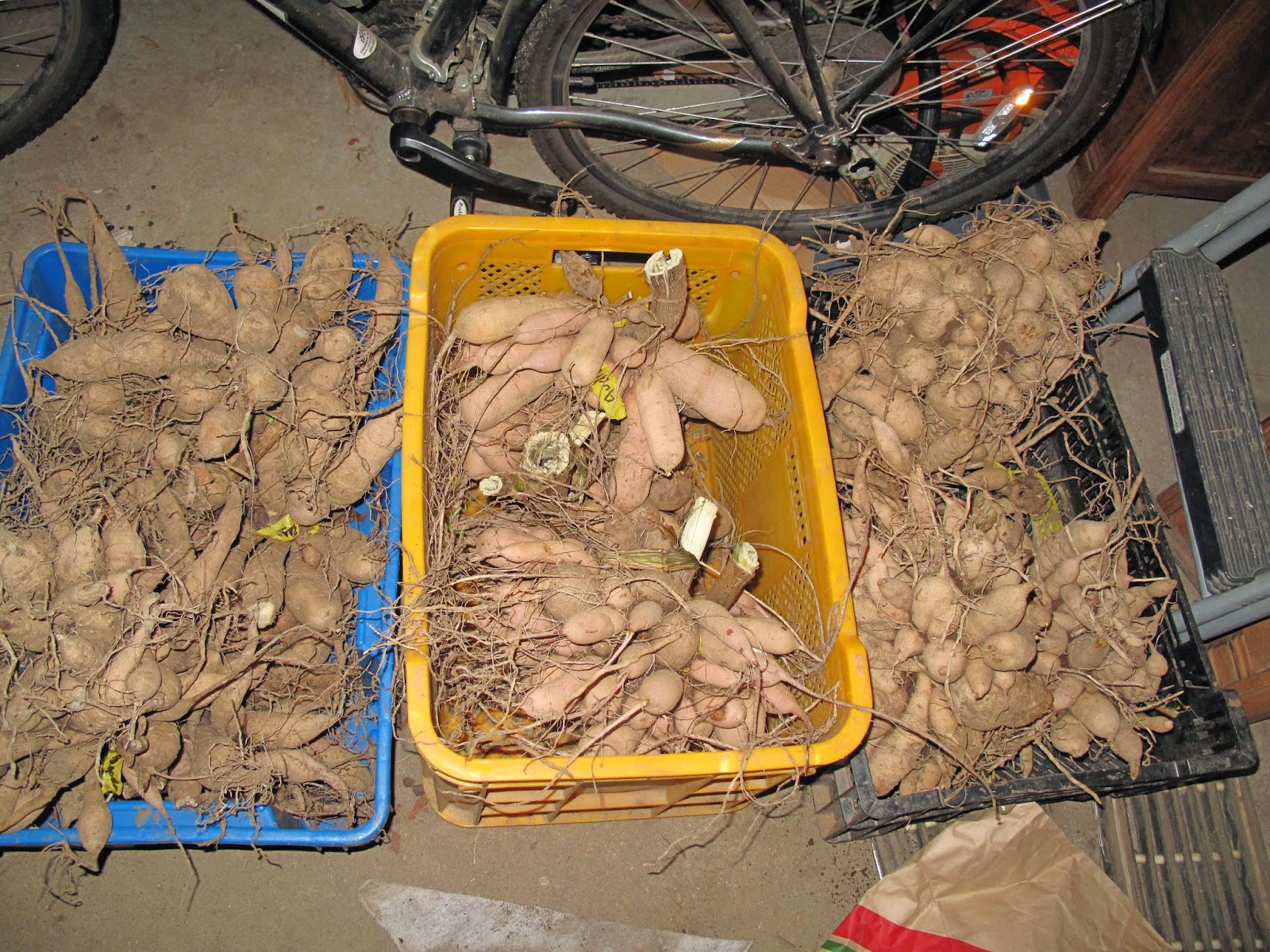 Here's the ones that I'm actually finished with, rolled up in labelled bags and stored in what used to be a wine cellar that is accessed from the garage and is built under the stairs.  One year a mouse thought that was a good place to spend the winter too:(  I am taking them into the utility room and dividing them there, near the warmth of the woodstove.  Much too cold to work in the garage. 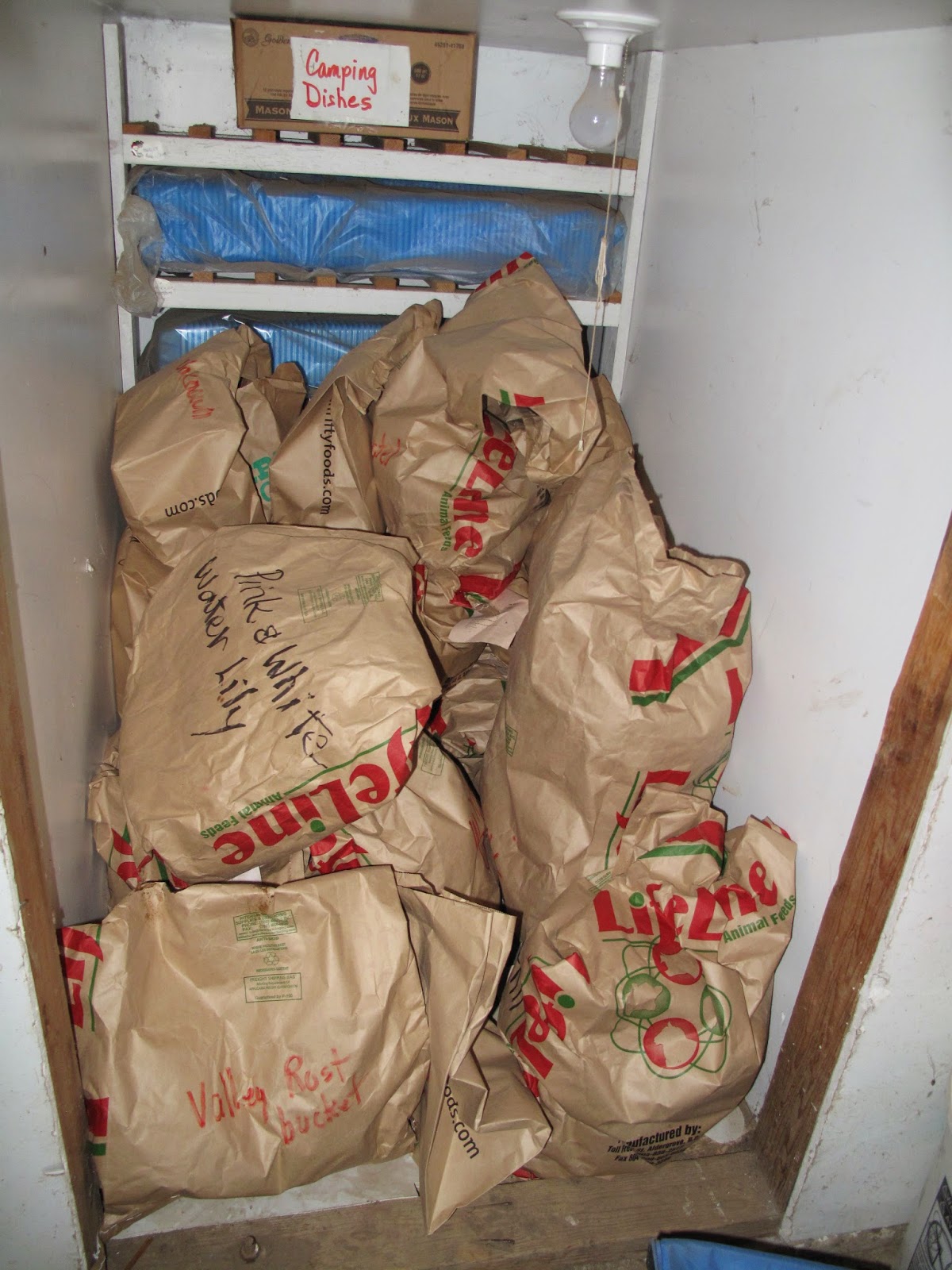 I don't think there is room in there for all of the bags I'm going to have.
And camping dishes....? Don't think we will ever use those again, any camping we do now is in a trailer, and it has it's own dishes.