My son David worked at the farm across the road for a couple of hours this morning.  That is a job that he has had since he was 15, and has continued to work there while working at other jobs, going to college, university, and even when he worked and lived 3 1/2 hours away during the four month summer break. He drove home on weekends to visit his girlfriend (who he met at the farm), and put in a Saturday working there.  The owners are family to him. On his way to his home now,  he passes by the hospital where my mum is.  I asked him to stop by and drop her glasses off, and to give me an update on how she was.  This is the text I got.

Hello.  Just leaving now.  She was in good spirits.  Recognized me when I walked in and remembered my name when the nurse came by.  We talked for over an hour.  Well she talked mostly.  She recalls most of what happened yesterday.  She recalled it in a sort of third person perspective.  Didn't seem at all upset about the situation.  Spoke about you and dad as well.  Remembered your name but couldn't remember dad's.  She was having lunch and managed to eat most of it.  She still doesn't seem certain how it all happened but doesn't seem worried.  I would say she was in an extremely good mood compared to what I imagine she was like yesterday.

I cried, happy tears.
It was a beautiful afternoon, and we had taken the dogs down to the dyke for a walk.  I needed the outdoor time.  I have missed out on a lot of that the last little while.  I took a few not so wonderful pictures with the phone.  Should have taken the camera, but needed the phone to keep in touch with David and to let my sister and Meredith know the latest.  Thank goodness the dyke is flat and straight, so I was able to text and walk and not fall on my face! 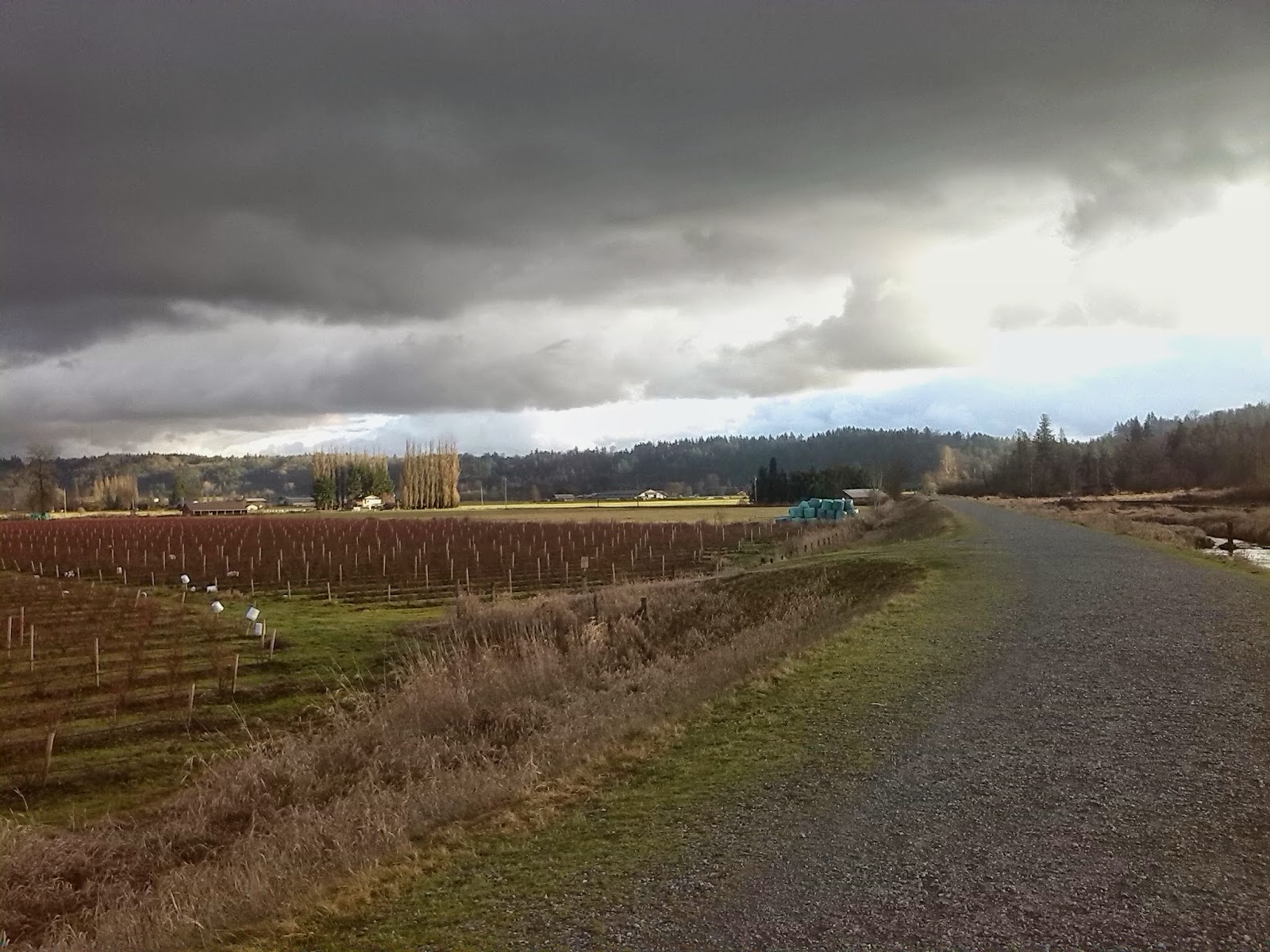 It was one of those dramatic sky kind of days.  We were walking in the sunshine more than the pictures show, and no those black clouds did not dump rain on us. 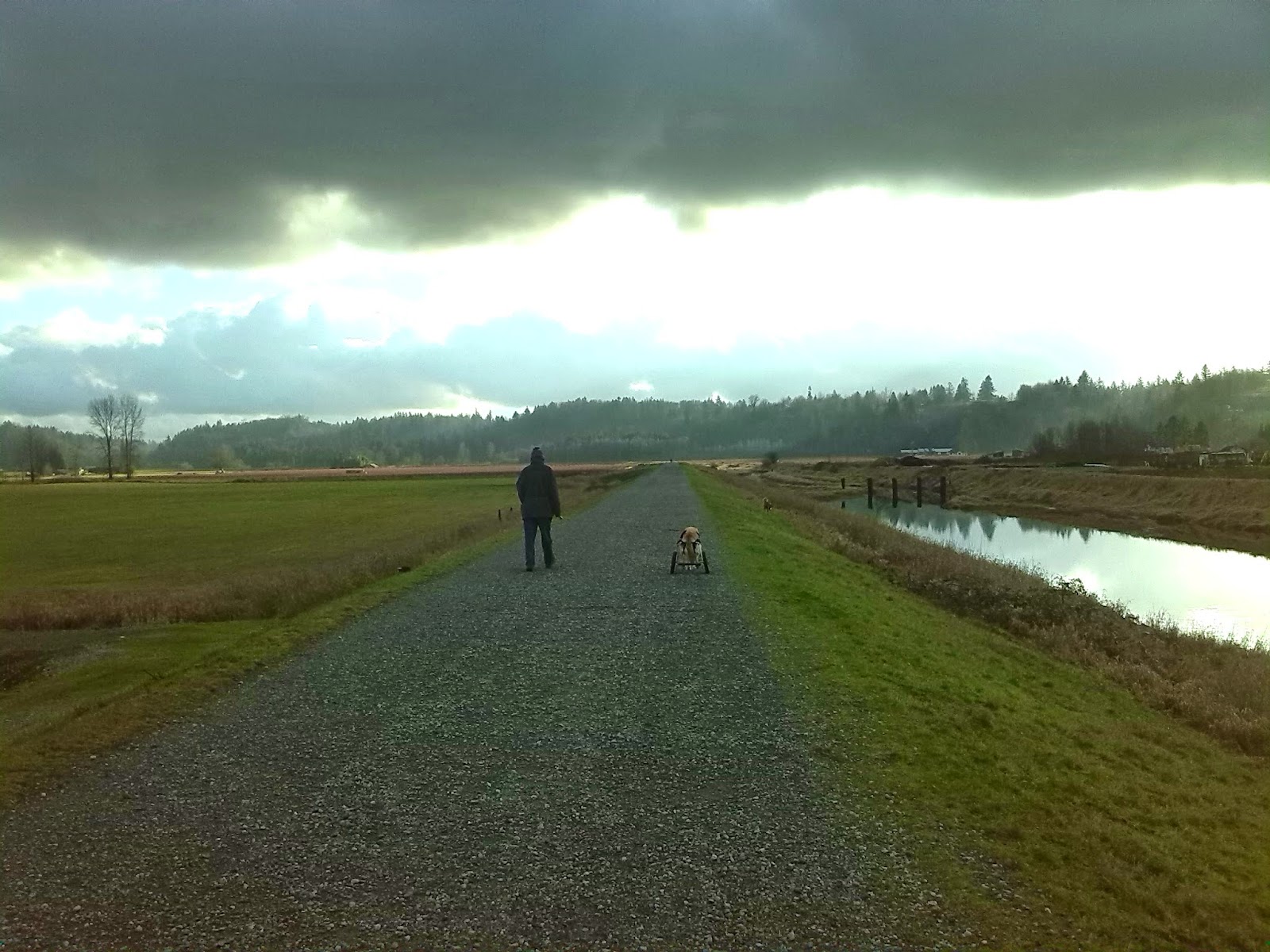 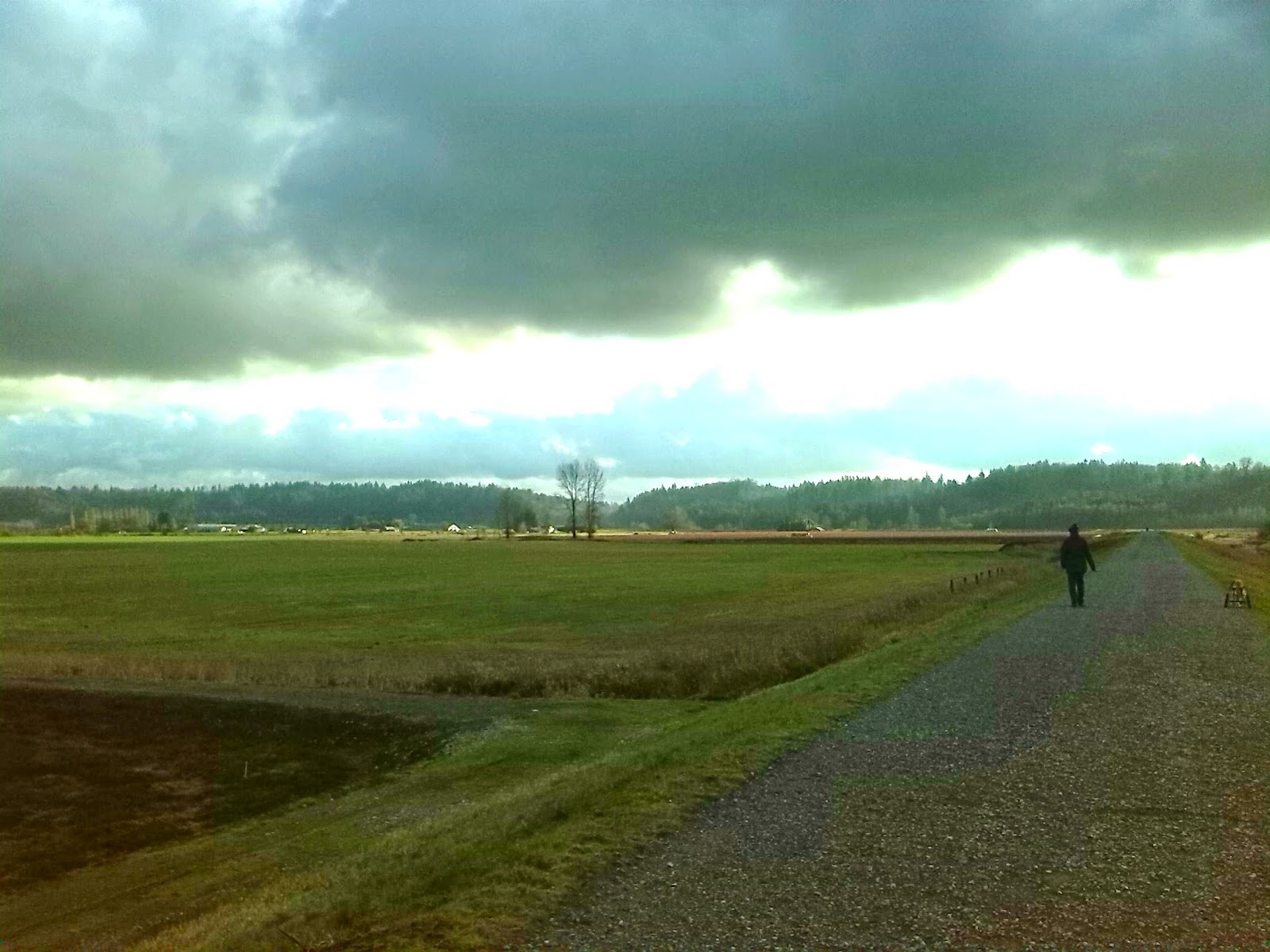 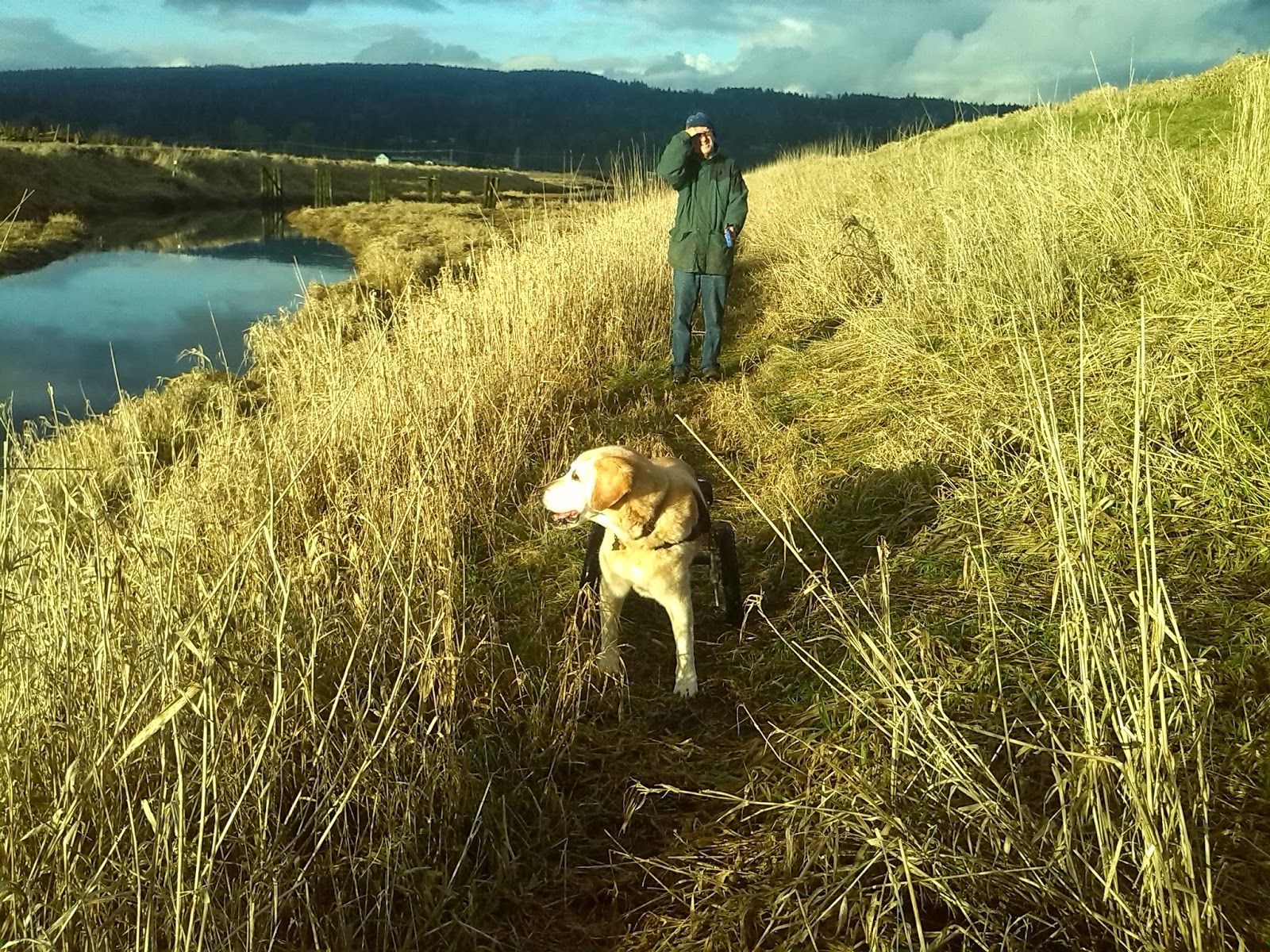 The dogs were game for a swim, and I think Calli would have taken the plunge if not for the leash holding her back.  She did stick her head underwater a few times to try find a big rock.  Jake and Luna usually need something to be thrown in the water to get wet, so we just didn't throw anything.  I think Jake was quite disgusted with us. 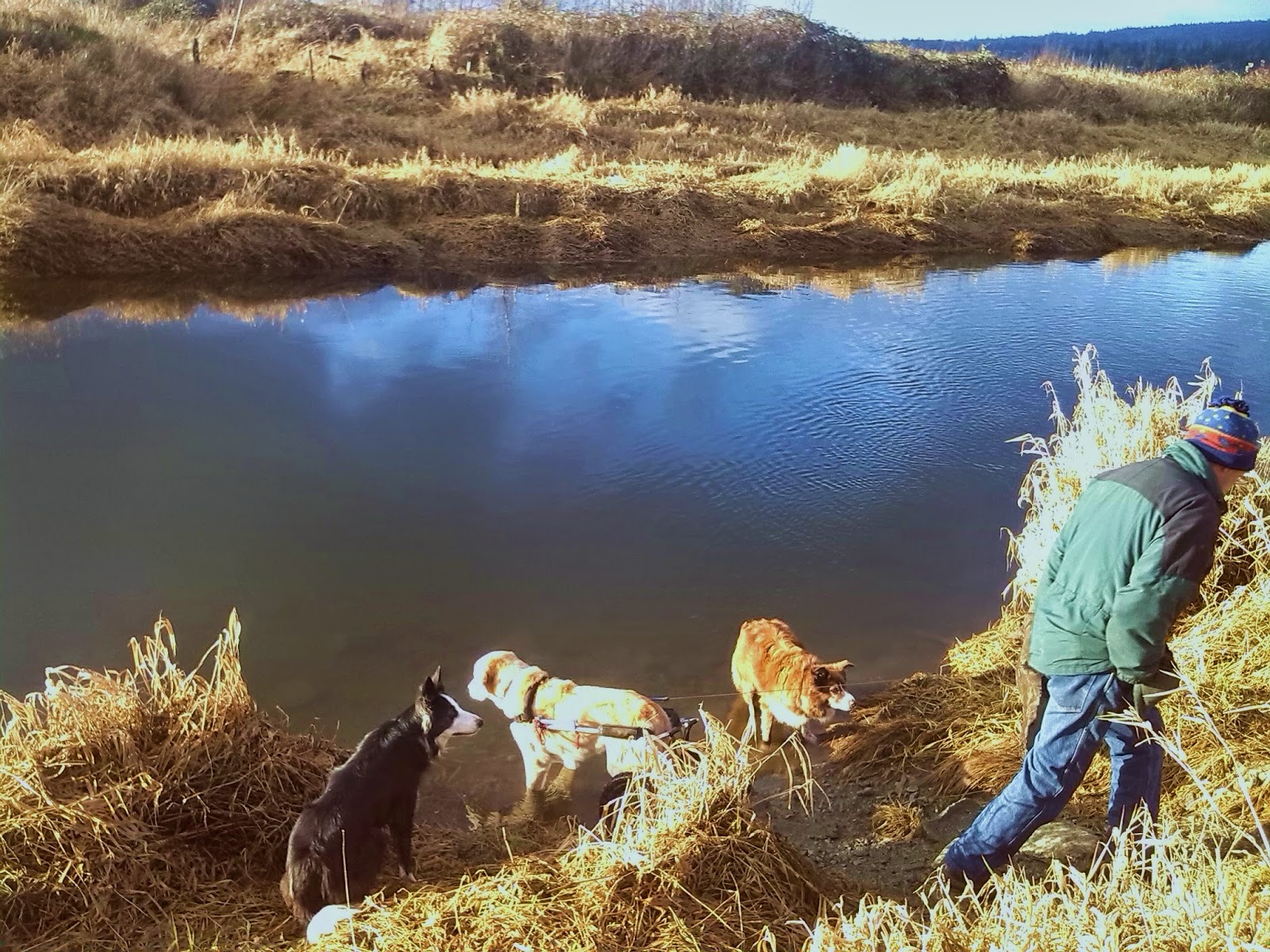 Christmas will be much better now.
Thanks for following along for the ride.
A very Merry Christmas to you all!