Why Did the Chicken Cross the Road?

Because it was in a coyote's mouth and had no other option.

Off we went, Monday afternoon, and managed to arrive there just before dark.  Wednesday evening just before 8, we were walking back from the Oliver library and I got a text from David, 'How many chickens are supposed to be in the south coop, I only count 27?'
I told him there should be about twice that many.  He wandered around in the dark, found one more hen in the compost box, found a small amount of feathers, and in a brushy area, found a hole dug under the fence between us and the neighbours. He filled it in as best he could that night.

I told him to leave the hens in the coop the next day, and we would come home that day.  I was hoping there were some hens that had flown up a tree, out into the back yard, into the vegetable garden, and they would show up the next day. No such luck.  The first thing that I noticed when I checked the hens in the coop, is that the little rooster was missing.  He is a wild thing, no where close to being any kind of pet, but he's been here for at least five years, and I thought it was sad that he was gone too.  It surprised me though, because he can fly well, and I thought if any of them was to get away, it would have been him.

At 6:20 am Friday morning, I was grinning from ear to ear when I heard him crowing somewhere near the front of the house, up a tree I guess.  When I went out later he was over at the north coop, waiting for those girls to be let out, and he spent the day hanging out there.  Too bad he doesn't lay eggs!

Hanging out with the young ones.  Do chickens go grey as they get older?  He seems to have grey on his formerly all black tail feathers 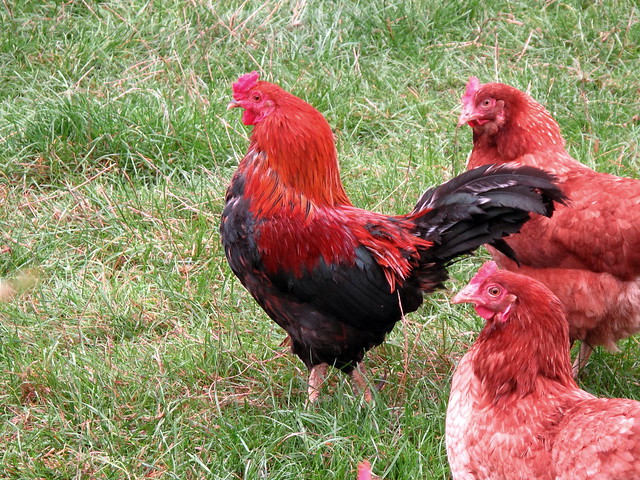 So we are down about 16 eggs a day, and missing 25 to 30 hens:(  These were the older ones that I had kept over from the previous year, and weren't laying that well, but it still means we will have about 9 dozen eggs less a week to sell.  Judging by the eggs collected each day, those chickens were all nabbed on Wednesday, after they had laid their egg for the day.  It must have been a flippin' assembly line out there, coyotes carrying those chickens away.

Ironically, Thursday morning, before we left Oliver, I got a call from a neighbour here, that walks down the road daily.  On Wednesday, someone that drives that way often, stopped to tell her that on her way out, and on her way back 40 minutes later, both times she had seen a coyote crossing the road, carrying a chicken.  Because the coyote came out of the field next door to us, she left a note on their gate. They don't have chickens.

Friday we spent time beefing up the defenses.  The fence that confined the south chickens to a smaller area, that had been taken down to hay that field, was put back up.  There's more than enough room in there for 28 hens.  It moves them about 30 feet back from the property line.

Some of the lucky old ladies.  They all rushed to the fence when I went over there.  'Where's our pear peelings?' they asked. 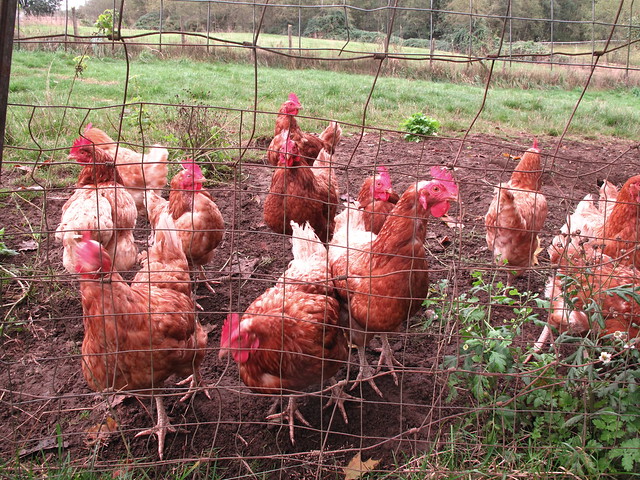 In the field where the north coop is, we did some work where there was a chance of the coyotes digging under. The fence line is a constantly evolving beast.  Brush and blackberries grow through it.  Fence posts tend to lift out of the ground gradually, taking the fence wire up with them.  We like to leave some of the underbrush, it is a safe place for the hens to dash to in case of an aerial attack. It is all made harder by the fact that both chicken fields border on the neighbours.  We are going to talk to the south neighbour and see if some metal gates he has, close to our property, that are part of the coyote's travel path, can be wired over to make them impassable. Making the area next to our fence a bit of a dead zone, with no easy escape for a coyote, can only help.  We don't have the energy or good enough backs to clear out and redo the whole fence line.