We had an unusual weather system that came through and dumped a ton of snow on us yesterday and mostly today, while the temperatures hovered just at or just over the freezing mark.  This meant that the roads stayed  clear and wet, until later today when they eventually did get snowed over.  I drove home from White Rock just before 6pm, and it was a little slippery in spots, but I and the truck made it in one piece.

This morning by 11am we had 9 inches in the deepest spot.  The snow level was uneven because of the temperature.  Some spots were just that tad warmer, so the snow just melted on contact for the longest time, before it finally started to cover.

It was beautiful this morning, and I got carried away with photos.  We don't get a lot of snow compared to other places, so it's always a little bit exciting for us.  Here's a video to get you in the mood.  I think the dogs were smelling some coyote scent on the wind, Luna has her hackles up.  In the last little bit Luna looks like a short legged Corgi don't you think?

Catching snowflakes on her tongue? 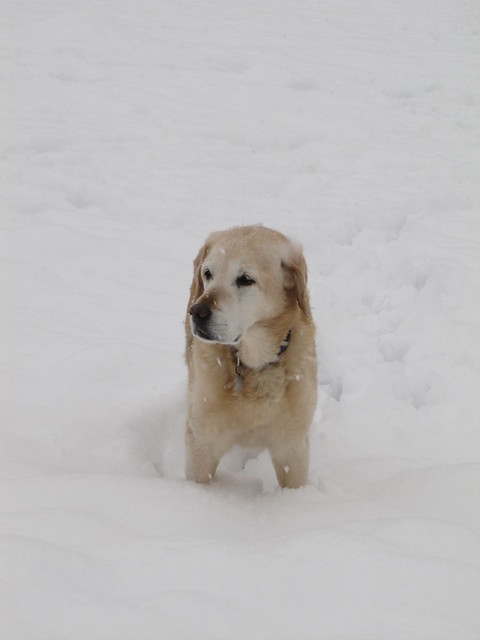 We went out to the bush, thinking that the snow would not be as deep on the trail, and would be easier for Calli.  It was, but the trail was covered with bent over, snow laden, salmonberry bushes.  Good thing I had someone to go ahead and knock most of the snow off!

Those chickens didn't do much free ranging today 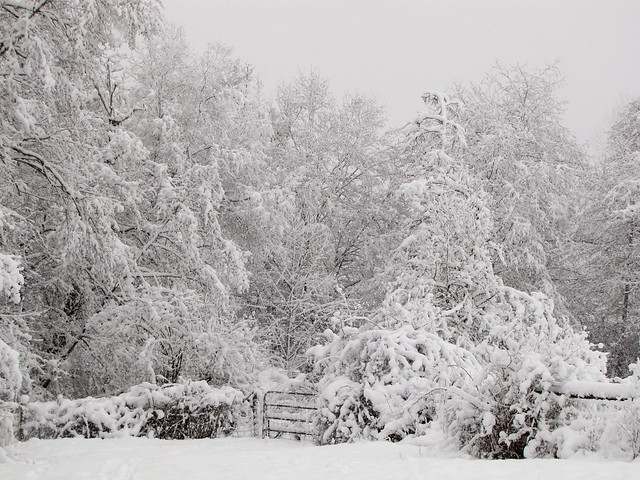 After tromping through all that beauty we had to come back and do the mundane things like pulling all the heavy snow off the top of the pipe and tarp Costco shelter over our travel trailer.  It's been up quite a few years, and the tarp is getting old, but so far we've managed to protect it from collapsing under pressures that wind and snow have put on it.

It continued to snow until this evening.  The forecast is for warmer temperatures, sunshine and  up to 14C or 57 F by Friday.  Hard to imagine at this moment, but in a day or two the snow will be nothing but a muddy memory.