This is what I saw, looking out of the kitchen window early Saturday morning.  It's about a hundred feet from the house.  I was sort of peeking around the edge of the window (the blurry dark strip on the right), as I didn't want it to see me.  I wanted to see where it actually had the nerve to go.  It is in what we call the alleyway. Map   It's a long fenced section that the coyotes would normally avoid, because they would feel a bit trapped.  Obviously not this one, and maybe others too, as we'll get to shortly.  This coyote was not healthy looking at all.   Larry went down stairs to get his coat and boots on, and by the speed he was doing that, Jake and Luna knew something was up.  The coyote turned to it's left through the gate into the hayfield, which would be at the bottom right corner of the picture. 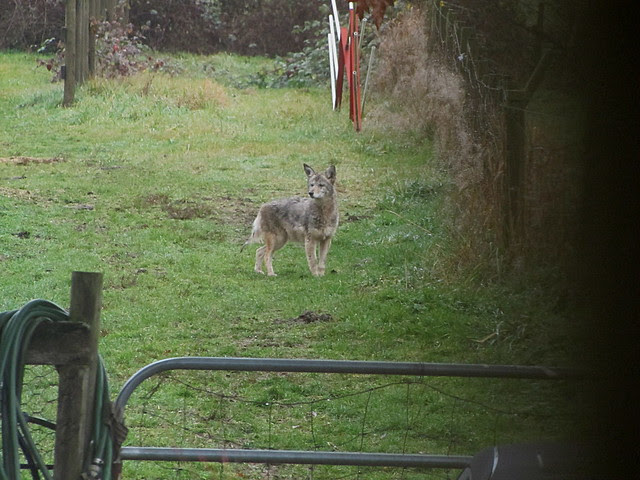 Here it is heading down the field along the fence line between the hayfield and the chicken field. That reddish blur right below the coyote is a chicken.  Sorry for the bad photo, the light was bad, the coyote was moving, I was excited, I was out on the deck barefoot and in my nightie. 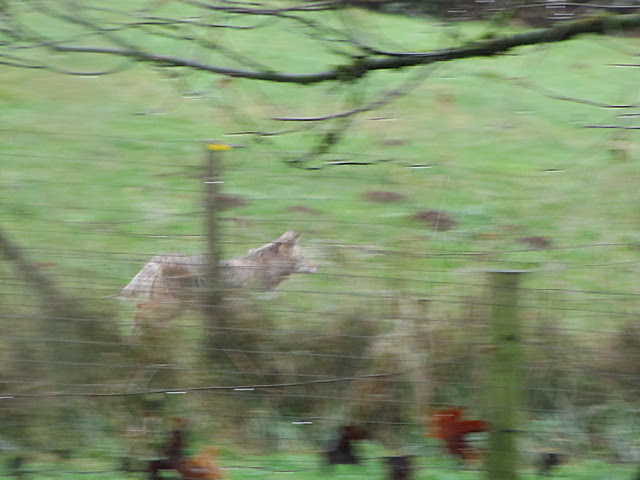 So then I shouted to Larry let the dogs out.  They shot out, straight into the hayfield, Larry hot on their heels.  The coyote ran up the hayfield.  When they run, they look like they are expending no energy at all, and easily keep ahead of our dogs.  It made a quick right turn right where Luna is, and shot behind that blackberry pile.  Larry walked around later and looked at the other side of the fence.  The ground slopes away there, is soft, and it was easy for the coyote to squeeze under the fence.  I was telling the story to someone later, and they reminded me that if our dogs had got the coyote trapped in the corner, they may have got badly bitten.  True, although I had figured it would have gone over the fence in desperation.  I didn't want them running straight up the alley way after it, as they would have been long gone and Larry would have had no hope of keeping up with them.  I wanted to give the coyote a reminder that it can't just waltz in and help itself to our chickens whenever it feels like it. 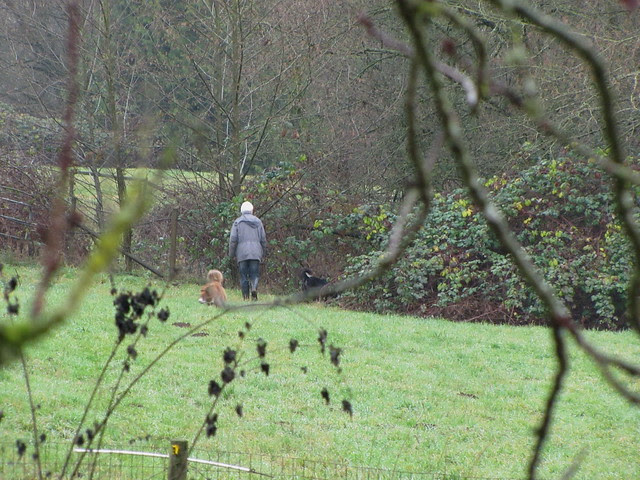 We had suffered no coyote (or other predator) losses with these chickens until November.  That is quite amazing actually.  We went to Oliver for 5 days, and came back to find a hole dug under the fence from the neighbours, and about 6 hens missing.  The interesting thing was that they had also attempted to dig under from our hay field, but weren't successful.  We wondered if that coyote Saturday morning was heading down to work some more on that hole.

We've heard lots of coyotes howling close by just lately.  A very eery sound.  When we were gone, Meredith said they were so loud one night they sounded like they were on the back deck of the house.  She got brave enough to go out with a flashlight, and saw eyes glinting back at her from the other side of our property line fence.  They were probably cheering on their friends who were working on the hole.
Posted by Karen at 5:32 PM