I've been in a bit of a funk this week.  First the bombing in Boston, and the whole story of finding the bombers, and how it will or will not affect the Sun Run tomorrow.  Then I had to sell thirty chickens because we have new ones arriving on Monday.  The whole selling on Craigslist thing and how you never know for sure if the person you think is coming is actually going to show up.  Buying and selling on-line seems to make some people think they can be rude and inconsiderate.  Anyway, long story short....they did all sell to one person last night.  Larry got the coop cleaned out today, and between us we got it pressure washed.

I've been going through my running outfit for tomorrow.  The forecast is for cloud, clearing near noon, and a 30% chance of showers.  I'm running in shorts and a tank top, but have a very lightweight pair of pants and top that I'll wear until just before the start, and then stuff into the pocket on my water bottle belt.  I'll be glad of something to put on at the end.  Another fleece top will be tossed to the sidelines when we start running. We have to do a lot of waiting around before the start, and it might be a bit cool.  We are driving to Surrey and taking the skytrain the rest of the way.  Hoping to meet up with two nieces who are also running, at the end.  Better go and have another drink of water....which will mean I'll have to get up in the middle of the night.  Trying to keep hydrated....

Nearly a couple of weeks ago now, when my sister was out from Ontario, I took her to a winery in Oliver. 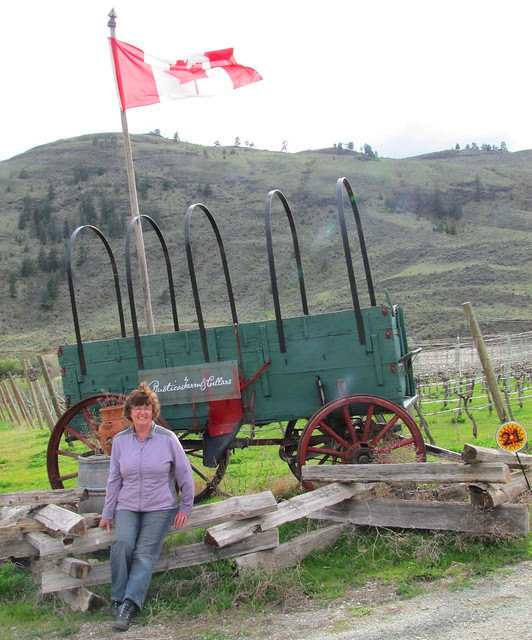 Most people go to wineries to taste and usually buy a bottle of wine. 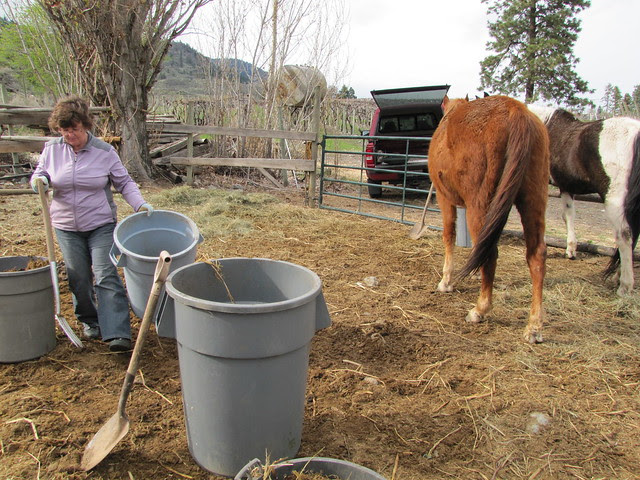 Not us.  I had put an ad on the Okanagan Craigslist, looking for some free manure.  I was contacted by the owner of a winery who told me just to come any time.  We went there one afternoon.  The guy (who probably could get a gig as Santa Claus at Christmas) sent us over to the horse paddock.  Two old horses.  DO NOT let them out of the gate he said.  Were we used to horses he asked?  Oh sure, no problem.  They were a couple of old-timers, showing their age.  Not as old as Pride I don't think, because I mentioned we had a 31 year old, and he looked surprised, but definitely showing their age more than Pride.  I think if I wasn't a horse person I would have been nervous going in the paddock with them, as they definitely checked us out.  Once they realized we didn't have anything edible for them, they left us alone. 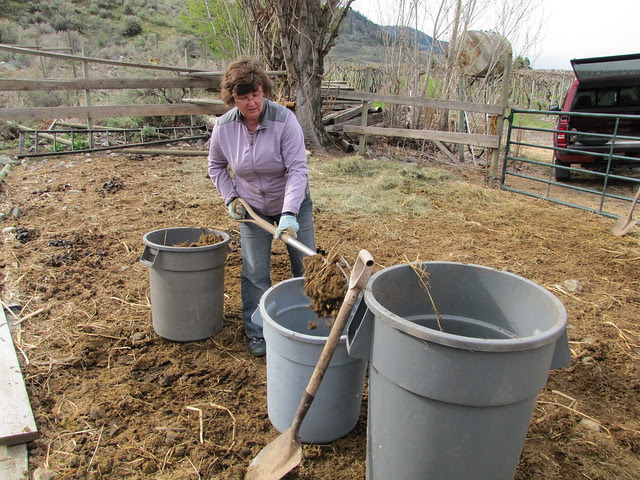 We had naturally assumed that there would be a big manure pile that to shovel from, but no, the manure was just spread all over the ground a few inches thick, and had been walked over.  At least it was dry, so not heavy, and much easier to scoop up  than we thought.  It wasn't long before we got our bins filled up. 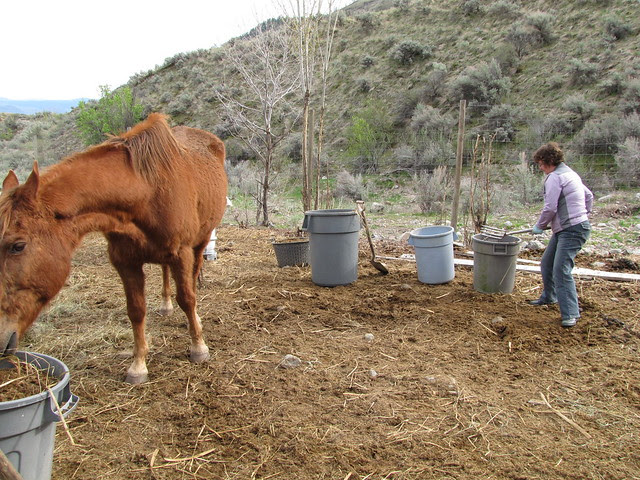 Back at the cottage, we dragged the old gates open off the back lane (very handy) and backed the truck onto the lawn by the garden.  Dumped the bins, spread it out, and rototilled it into the vegetable garden.  Probably not the best thing as it wasn't rotted yet, but I decide just to go for it.  Planted some potatoes and some carrots, and then tried to devise a plan to keep the cats out of it.  (There is an abundance of cats in Oliver it seems) Since the dollar store is very handy, we made a quick trip there and bought four packages of netting. Or maybe we went there to get chocolate bars.  We came back with both.  There were no dimensions on the netting package, but the thing turned out to be huge and we only used one.  The rest of the garden that hasn't been planted was covered in some pieces of cedar lattice we got off a 'free' pile, and some odd bits of wire.  There are a few herbs and some garlic that I planted last Fall.  Hopefully next trip, the carrots and potatoes will be up, and there won't be any cats tangled in the netting:(