At the beginning of August, we headed back to Oliver.  This time we were only staying one night, so we just took the truck and a tent, and our trusty bikes of course.  No dogs.  We had things to do that didn't involve dogs, and it was hot and there was no where to leave them safely.
We had an appointment in the afternoon the day we arrived.  After that we went to the campsite and set up our tent.  We took a chance and didn't bother putting up the fly, so we could maximize on the hot air rising out of the tent through the mesh in the roof.

We rode our bikes through the residential area that evening, and got back to the campsite about dusk.  I was happy that there were no mosquitoes. Ha! Probably five minutes after I commented on that, they all came out for their evening feed, so on with the long pants and tops.  The cigarette smoke from the annoying smoker in the campsite next to us kept drifting our way, but didn't scare the mozzies off.  In a bit though the wind picked up and they were gone.  The wind stayed pretty strong overnight, and we got a few big gusts, and one time one corner of the tent threatened to collapse. (I've bought a lot of things off Craigslist, but that tent was not one of my better buys). 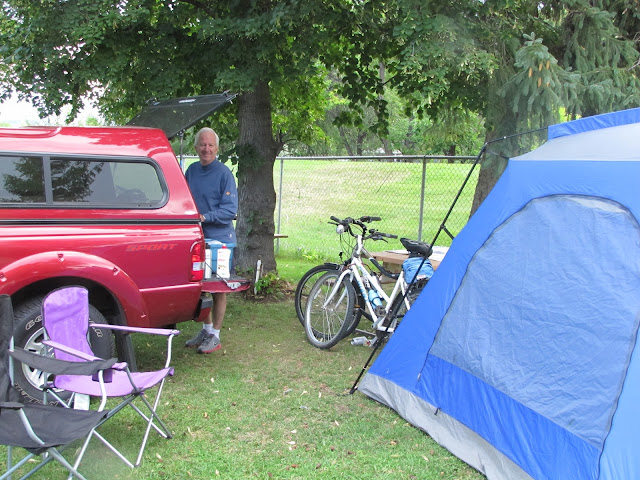 The next morning we got on our bikes early and took a leisurely ten minute ride to Tuc-el-Nuit lake.  It was just before 9am, and there was no one on the beach.  I was determined to go in.  Larry and I couldn't remember the last time we had gone swimming in a lake.  Sad, I know.  Before we left home, Meredith said we'd better take photographic evidence, otherwise she wouldn't believe it.  The lake water was a perfect temperature, which means kind of almost lukewarm.  Just how I like it.

That's our bikes sitting on the edge of the sand.

I set the camera on the bike seat to take the next shot.
It took a lot of sweet talking, but I managed to convince Larry to come in too. 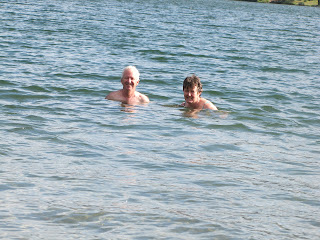 As we were leaving, another couple did show up for a quick dip.
After riding back to the campsite, we packed up and did visit a winery, and then stopped at an orchard and picked 70 lbs of cherries.  They were only 50 cents a pound and it only took the two of us about an hour.  Larry kept saying 'I think we've got enough', and I kept saying, 'oh, we'll just pick another bucket'.
Later,  after we got home, and had to pit them all and get them in the freezer, I was wishing I'd listened to Larry.
Of course I ate too many of them too. 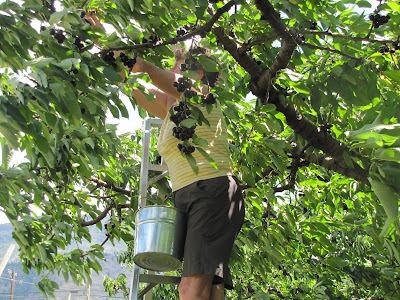 We stopped in Cawston on the way home and lucked out on some 'seconds' of apricots and peaches. They were certified organic and were only 50 cents a pound.