I Just Wanted to Cry

When I got home yesterday suppertime, after a long day at the market and the shopping and other things that needed to be done afterwards (gone from home 10 1/2 hours), the first thing I noticed as I pulled up the driveway was a chicken or two, or three, or ten, or forty, in the vegetable garden.
Larry and David were gone for the day.  Meredith would have passed by there a couple of times, but.....well obviously she didn't notice.  There are a row of hedging cedars between the driveway and the garden, and not many places to see into it from the driveway other than where the gate is.
I rushed over there and realized the whole flock was in the vegetable garden, and I could tell they were out of food.  They 'talk' differently when they are out of food.  So they found what food they could in the vegetable garden.
The broccoli which was looking nice and healthy and well on it's way to producing heads now looks like this.  The cabbage next to it looks the same.  Some of the smaller plants were yanked right out of the ground. 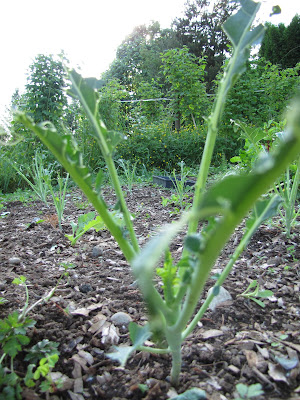 The row of bok choi which was a bit leggy, but would have produced a few bags for today's market, is decimated. 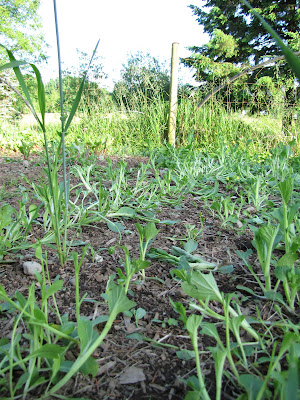 Kale, which was coming along gangbusters, now looks like this.  Some of it was yanked out too. 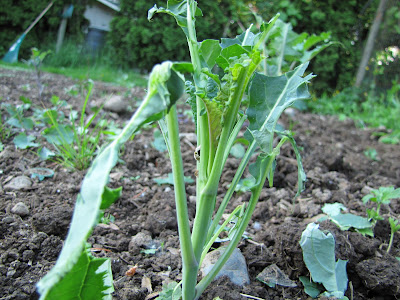 I honestly felt like crying.
I charged into the garden like a mad woman, screamed and yelled and herded them as fast as I could back through the gate.  The gate which I had gone through in the morning to let them out.  The gate it seems I neglected to fasten.  It must have blown open a bit later.  There was a bit of scratching done in a newly seeded bed.
The spinach had some damage, but 75% of it is still OK.  The arugula is mostly unscathed.
On the bright side, it could have been worse, but on the dark side, it really shouldn't have happened at all.  Now I'm heading out there to see what I can salvage for today's market.
Posted by Karen at 5:52 AM