All self respecting coyotes prefer to enter a chicken field restaurant through a ground level doorway.  If that  form of entrance becomes difficult or impossible, it is suggested that the coyotes hold a meeting to determine a successful entry into the chicken field local eatery.  Some of the older members suggested that it is possible to go over the top of the fence.  It is ideal to have heavy cover, ie brush or tall grass, to camouflage  the coyote as it creeps to the fence restaurant wall.  Time must taken to make sure that the coast is clear before attempting to enter.  Stealth is of the upmost  importance.  Cover on the landing side of the wall is also important.  That allows the coyote to hide until the ideal opportunity presents itself to grab the chicken cordon bleu and make a run for it.  Any self respecting coyote refuses to pay for it's meal, and does not hang around to be made to wash dishes in lieu of payment. 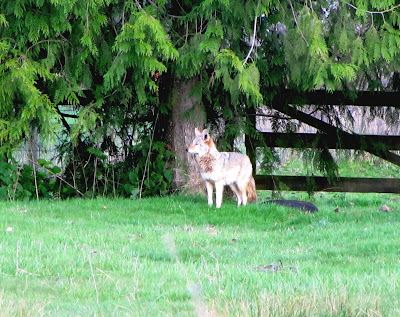 Yep, the coyotes held their meeting.  They all agreed that there was chicken just waiting to be had.  And yes, that fence was there to be climbed. ( I can hear all those commenters saying 'told ya so!') Yesterday I was making jam.  I was more or less done, and noticed that there was a hen cackling away in the south field.  Kind of a 'I've laid an egg and I want you all to know about it' cackle, but not quite.  I thought was a bit late in the day to be yelling about laying an egg, and the hen was stood in one spot with her head held up high.  So I walked out, across the driveway, and stood at the fence looking down the field.  There were other chickens stood still with their heads up.  The crows were squawking away, so I wondered if a hawk or eagle had flown over.  Couldn't see anything, so scanned along the fence line where we had put up the new wire to see if I could see anything suspicious. Nothing.  The hens were still worried about  something though. I was just about to give up and head back inside, and suddenly out of the long grass in the ditch along the fence at the bottom of the field, there shot a coyote.  It ran in an arc, in order to cut the closest hen off from making a dash for the coop.  The hen was grabbed, and I screamed and yelled and banged on the wire fence with one hand, and low and behold the coyote dropped the hen, and a whole bunch of feathers, and the hen ran for her life back to the coop.  The coyote ran the other way, and disappeared back into the grass.  I ran back to the house and yelled for Larry, who came out with the dogs.  It was raining at this point, and he put raingear on and followed the track through the tall wet grass, and all we can figure is that the coyote came in and got out over the 5+ ft. fence in the corner where the fence between the chicken field and our hayfield  tees with the fence line between our property and the neighbour's hayfield.  There was no other way out, and there was a chicken feather stuck to the fence right near the top.  So now we figure we need to attach some wire that leans out, away from the chicken field, to stop the coyotes climbing over.  And that long grass needs to be cut down, and... and... and.....  This could be endless.  So as a temporary measure, the hens have been confined to an area about 50' x 80'.  The field has been cut off just below the coop.  There is a roll of wire there on a permanent basis.  When we get new hens we roll that out to keep them close to the coop so they don't get lost further down the field and round the corner, until they figure where the food and water is, and where they are supposed to sleep at night.  There is a lot of open space between the bottom of the field and that temporary fence.  A coyote will be less willing to expose themselves in the open. 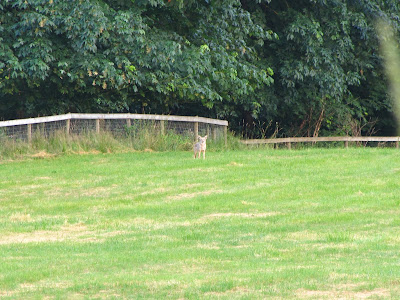 Do you hear that,  coyotes?  It could be very dangerous to get yourself trapped in the open between those two fences. It would be quite close to the house, we might have a gun, pellet gun,  airsoft pistol. In fact so dangerous that I think you should wander off and find someone else's chickens that are easier pickings.
Posted by Karen at 12:34 AM