The sheep shearer came yesterday.
Years ago, I did shear the sheep myself.  I probably didn't do more than one a day, and sometimes I ended up with one getting up before I was done, which made things a bit awkward.  I loved it when you had a compliant sheep, sharp shears, and the fleece just flowed away from the blades.  But, you need a good back, and mine isn't the best, so I decided I had had enough.
We got the sheep into a small pen in the shade.  It is best done a bit beforehand so that they have a bit of time to relax before they get stressed again. 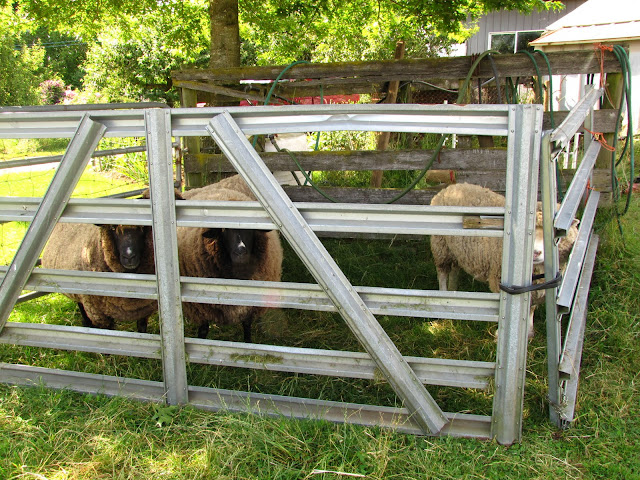 Luna thought it was great, she could get up close and the sheep couldn't move.  Hmm, so much for it being relaxing for the sheep. 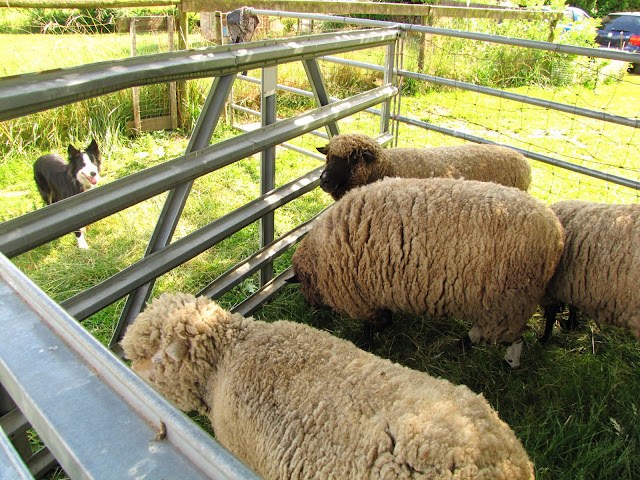 Shearer Guy started with April.  He said he had to be more careful with her, as being so old, she didn't have a lot of fat, but had extra loose skin.  Hmm, I think that loose skin stuff applies to me too:( 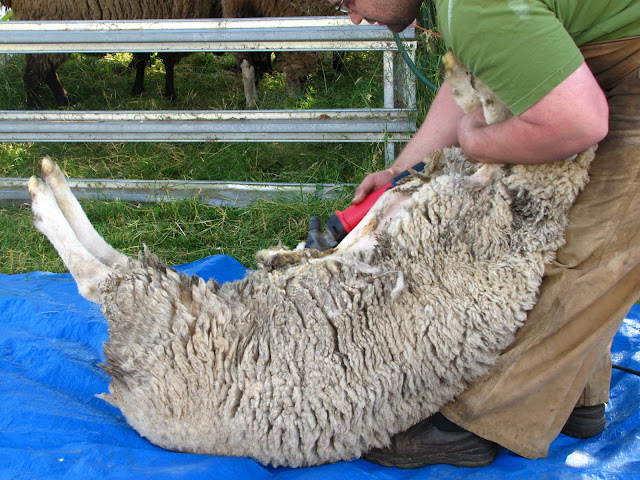 Shearers usually start on the chest and belly, where they can find a spot the wool is thin or absent, and it is an easy spot to start. 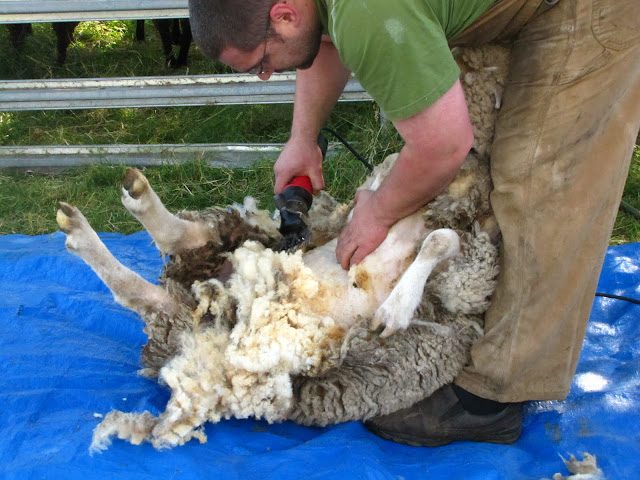 I'll bet all that lanolin makes for soft hands:) 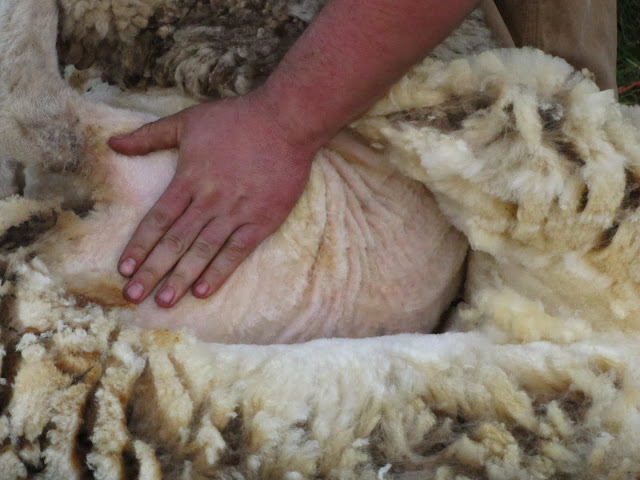 The trick to successful shearing is to position the sheep so that the skin where you are shearing is stretched smooth and tight.  Most sheep are relatively docile when sat on their back end, but not all. 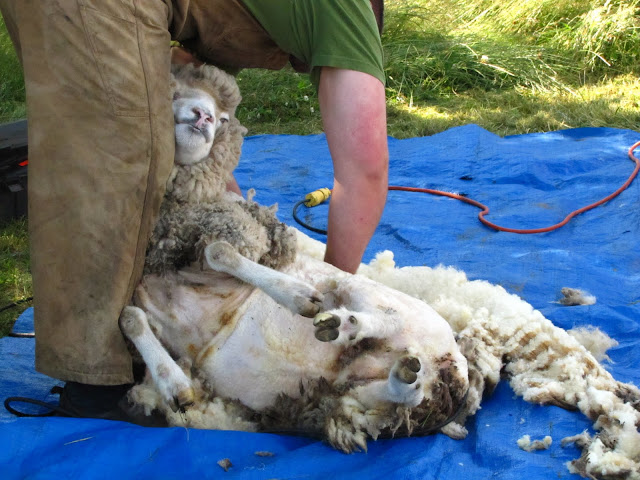 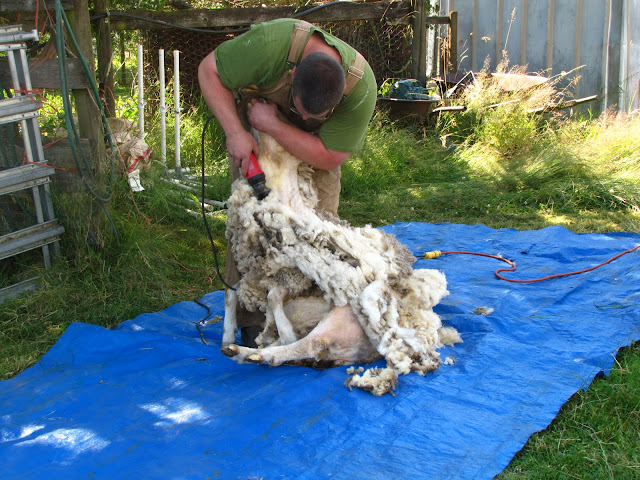 The fleece flows off in one big blanket 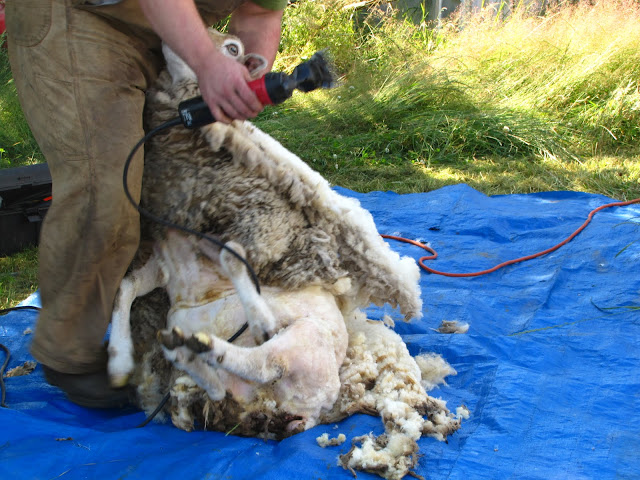 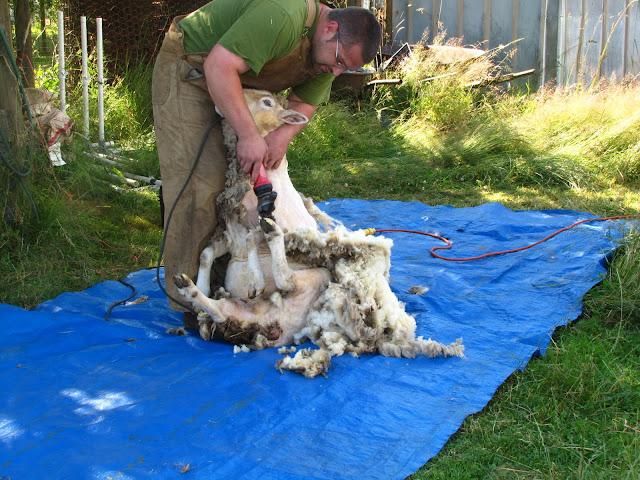 He also gave their feet a quick trim.  April has horrible feet.  The outside half of her hoof is very big and grows fast and curls under.
Here she grabs a quick bite, some yummy buttercups.  Our sheep love buttercups, but horses and cattle will avoid them, as they are actually poisonous.  The poison is neutralized when the plant is dried, therefore is not a problem in hay.
Interesting, just googled buttercups, and read that they cause gastrointestinal upset to sheep as well, but I have never seen them cause any problem, and I have watched our sheep chose buttercups over grass. 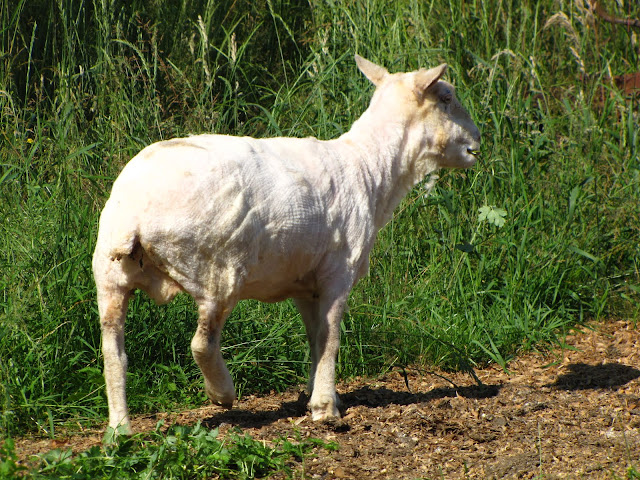 April looks back to see where everyone else is 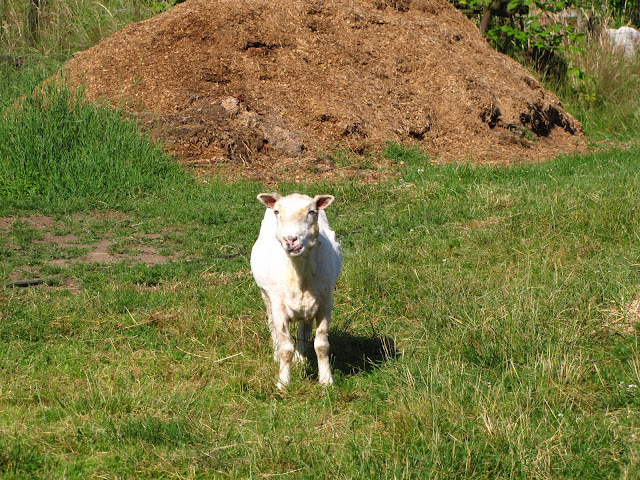 And here is her wooly coat.
You are looking at the part that was against her skin. 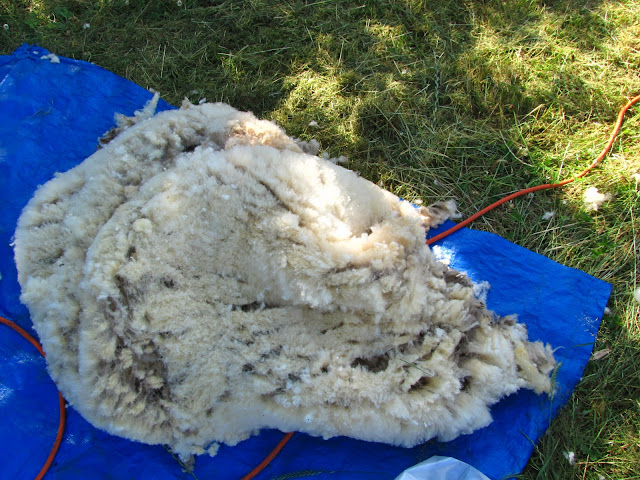 And now, scratching on the gate was much more effective 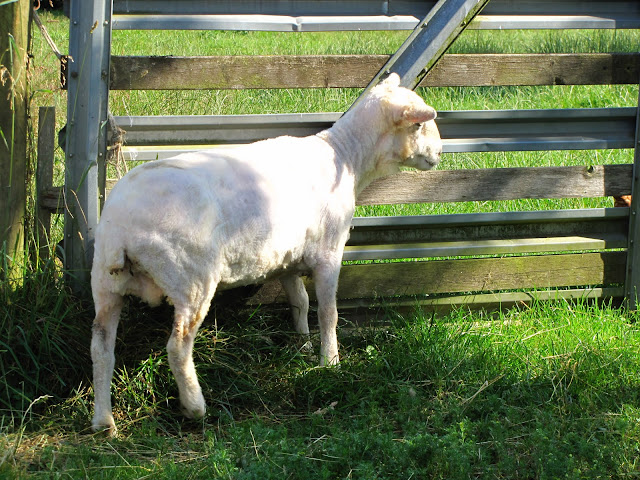 Time for sheep number two.  She is the youngest, biggest, and pretty fat.  No worry about loose skin here. 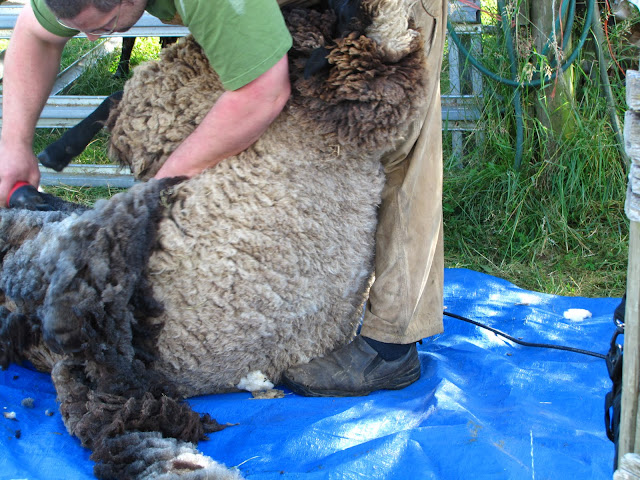 She struggled a bit though, and the shearer had his hands full. 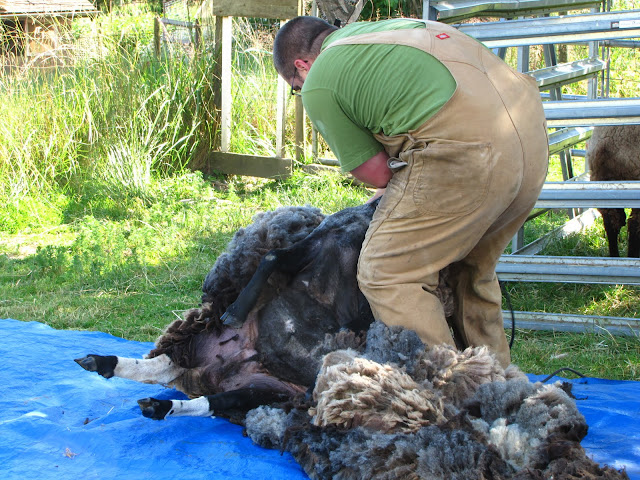 After she was done, I thought she and April were going to have a head butting contest, but it turned into a butt smelling instead.  Sheep seem to depend a lot on the visual, and if a sheep looks different, well it must be someone new.  There was a lot of bawling going on too. 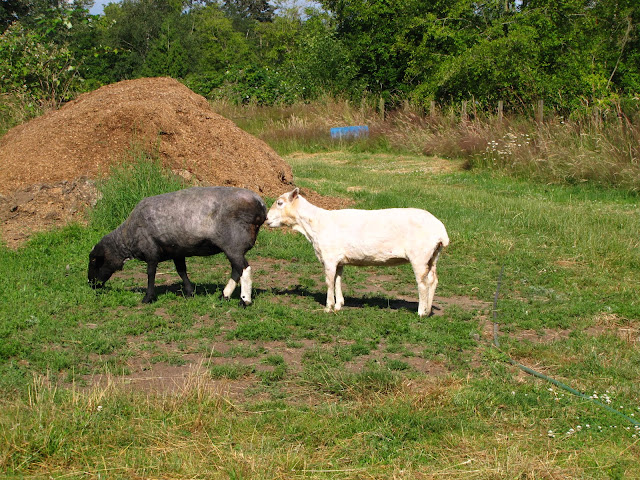 And Fatty chows down on some dried out grass that had been laying there for a week.  Larry had cut it when he was heading out to mow the back field.  Now if I had put that stuff in the hay feeder, I'll bet no one else would have touched it.  No wonder she is so fat, she'll eat anything. 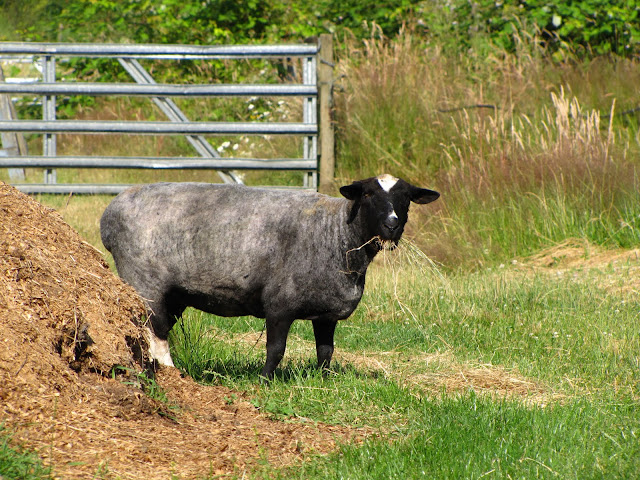 Sheep number three, another fatty.  When you push down on the knee like the shearer is doing here, the whole leg straightens out and you can shear down the inside easily. 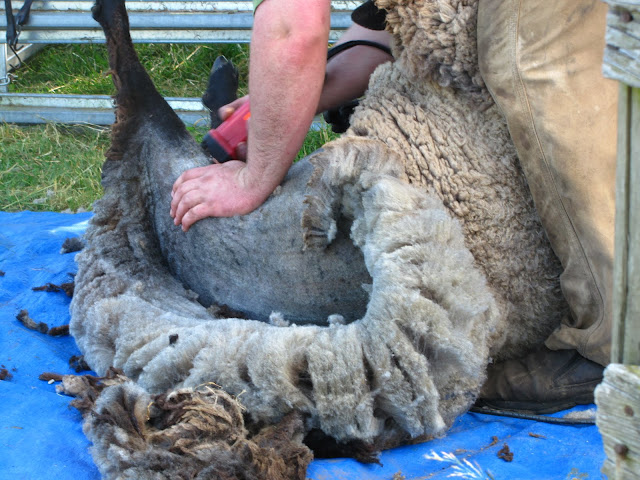 Luna wanted to be right there in it, but I kept her on one of those farmer leashes, also known as baling twine, so that she wouldn't cause trouble. 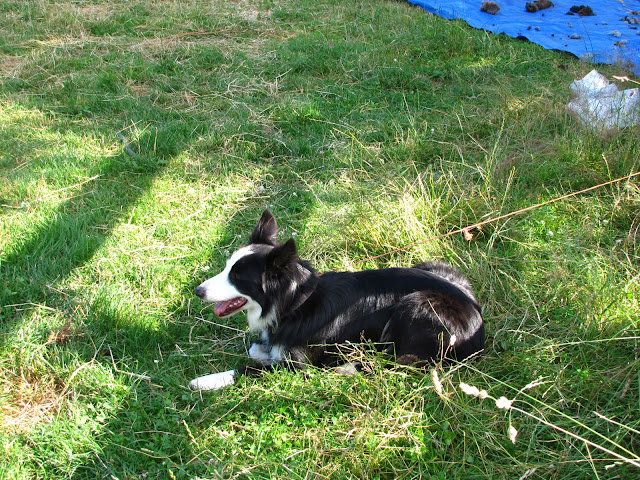 And here they are all done, two fatties, and two oldies. 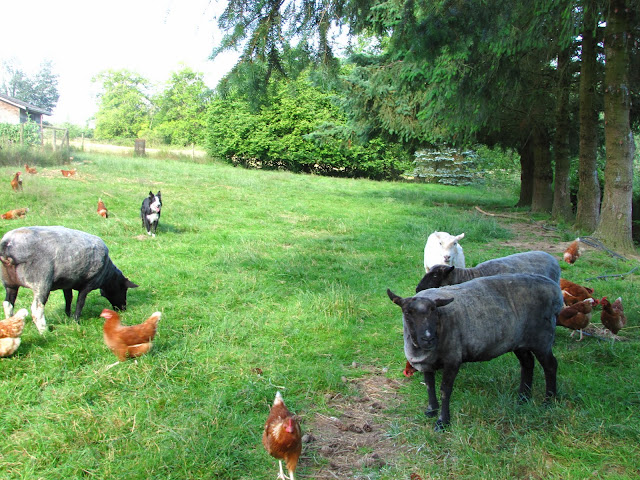 And here's a sweater I knit a long time ago, when I went through a spinning phase.  Yes, that sweater is knit from wool from our own sheep.  I might have sheared it off, and I definitely washed, carded, spun and knitted it.  The wool is the natural colours of the sheep's fleece.  I'm not even sure it ever got worn, as it is a child's size, but I'm keeping it as a souvenir:) 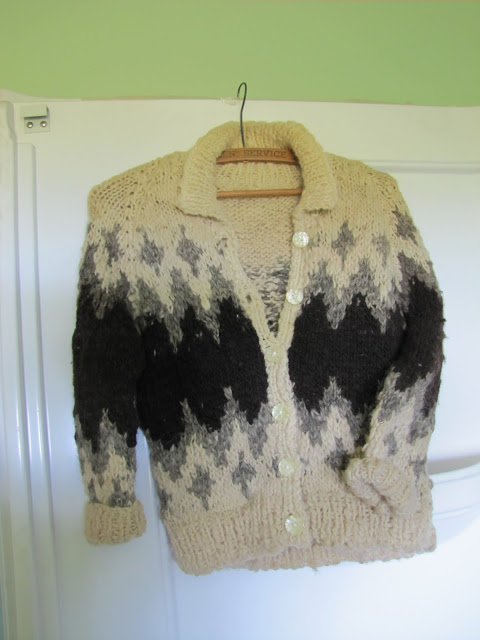