It's always pretty crazy around here on the weekend.  With going to two farmers markets, there seems to be so much to do, and not enough time or enthusiasm.  I have a last minute panic on Friday, thinking of the list that I had in my head for what I was going to get made that week, and how far behind I am at getting those things checked off.
Then on Friday evening, it is time to start picking some of the produce.  Things like potatoes, carrots, beets, peas, beans.  I like to pick the greens when they are damp from the morning dew, so it is a 6am rise on Saturday morning, and I get the salad mix, arugula, basil, kale, chard, and things like that picked.  Larry gets the truck loaded up, lets the chickens out, etc.  At the start of the season I went to the Abbotsford market on my own, and Larry came at the end to help me pack up.  The last few weeks, now that there are more vegetables, and also flowers to be picked for Sunday's market, I stay at home and do that, and Larry takes my place at the market.
We wear rubber boots for much of the year, but now that it is summer, rubber boots are just too hot.  Not matter, you still need something waterproof on first thing in the morning, because in this part of the world we get such heavy dew. 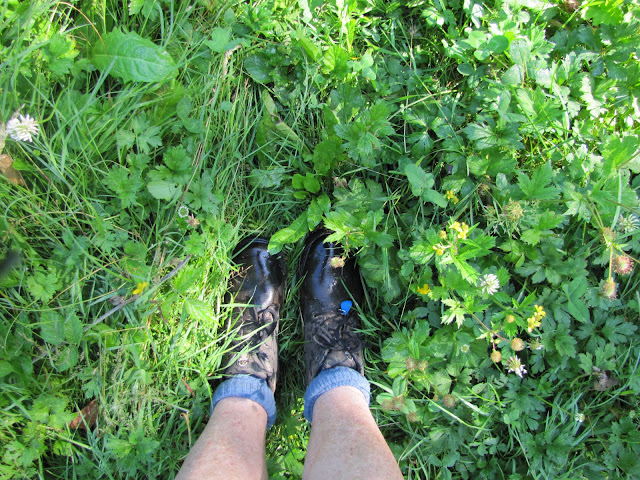 Part of the morning tasks are going to check on Pride, and taking the dogs on their morning bush run.
The first stop is to give Pride his apple and put on his fly mask.  Luna's always got to check him out. 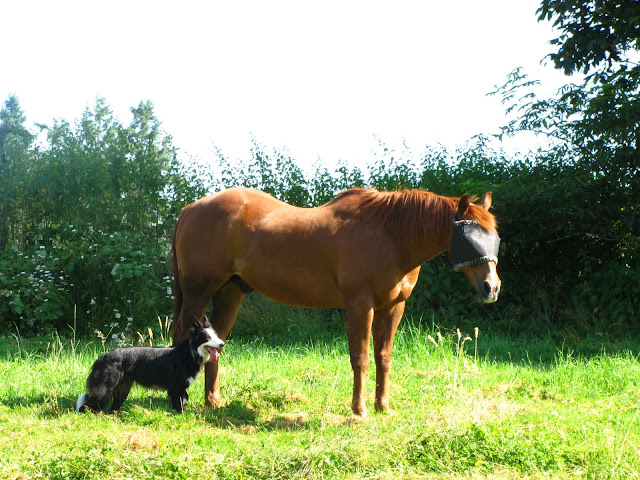 Then we head through the gate to the back bush, where the dogs get to practice a little impulse control.  After the 'okay', Luna and Jake race off side by side up the path through the grass, as fast as they can go.  Every time, without fail.  If we don't seem to be following them, but heading into the bush instead, they come back. 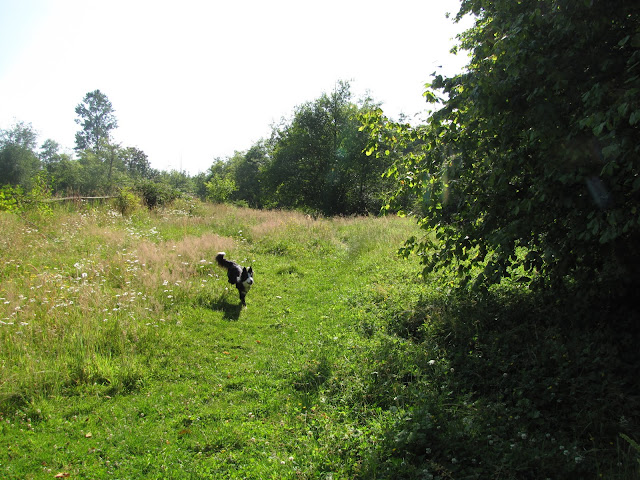 Into the bush we go 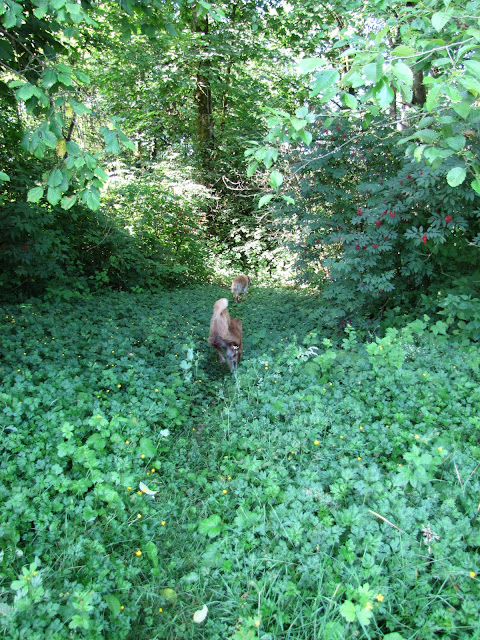 Parts of the trail are horribly overgrown.  You can barely see Calli in the middle of the photo. 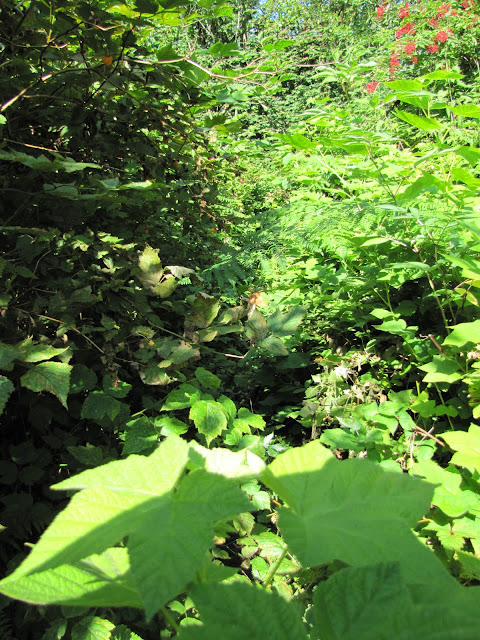 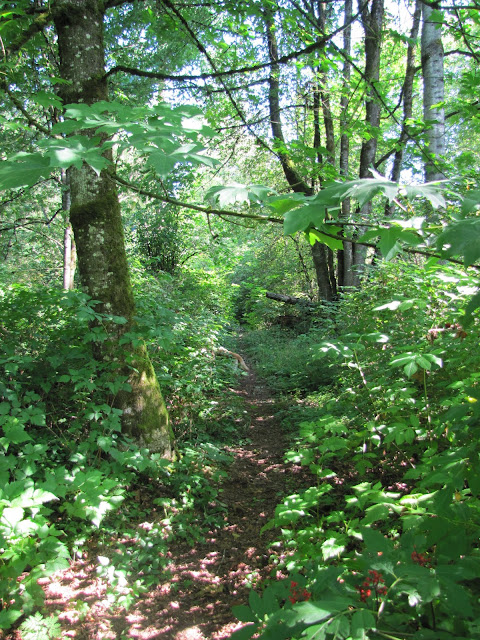 Jake was on squirrel alert! 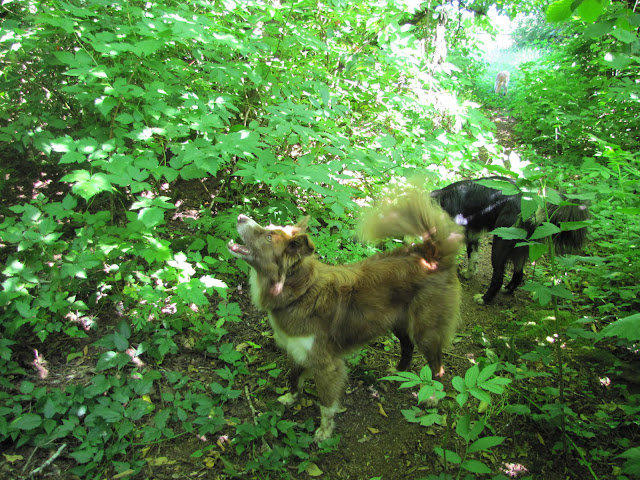 Calli is still trying to find some of the last salmonberries 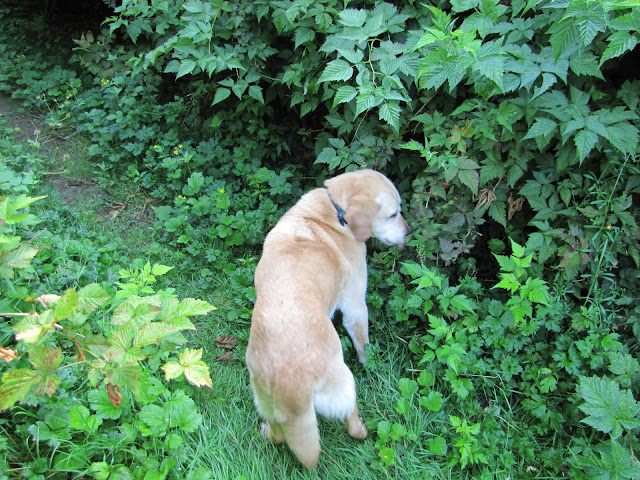 So I help her out 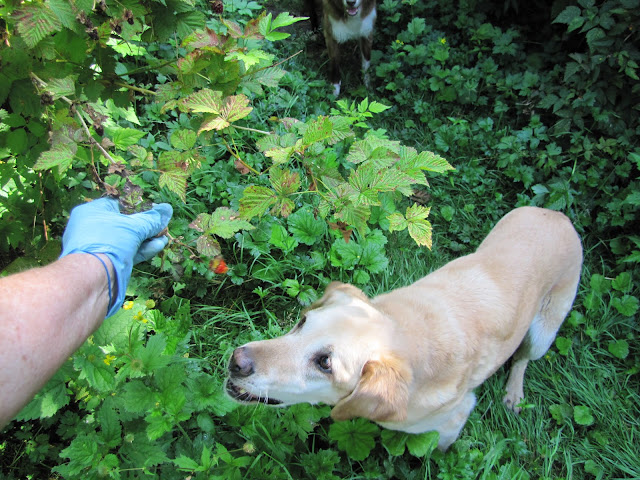 The creek has dried right up, other that one little pool further along that Luna likes to flop herself into 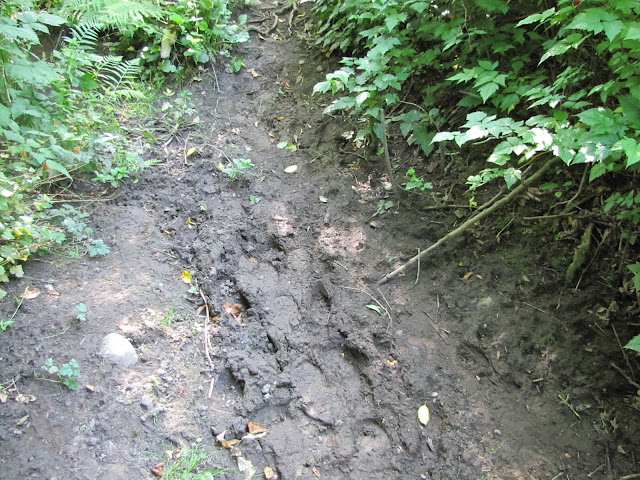 There was some excited barking by Calli, which meant she had probably hit on a hot coyote scent.
I started calling, and Luna came back so fast she was a blur! 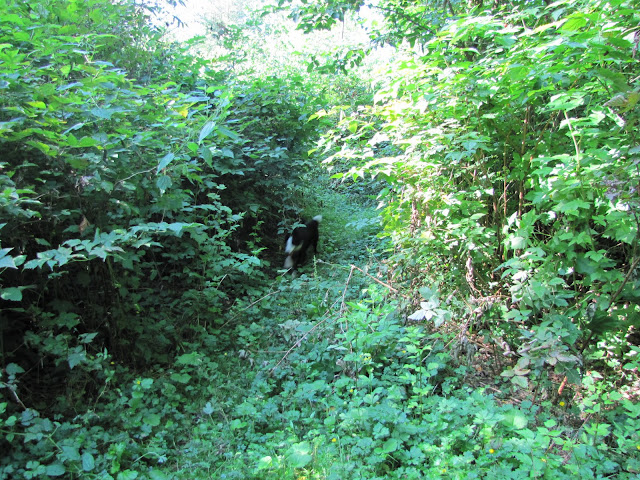 Calli came back eventually, and she got a treat, as did Luna and Jake 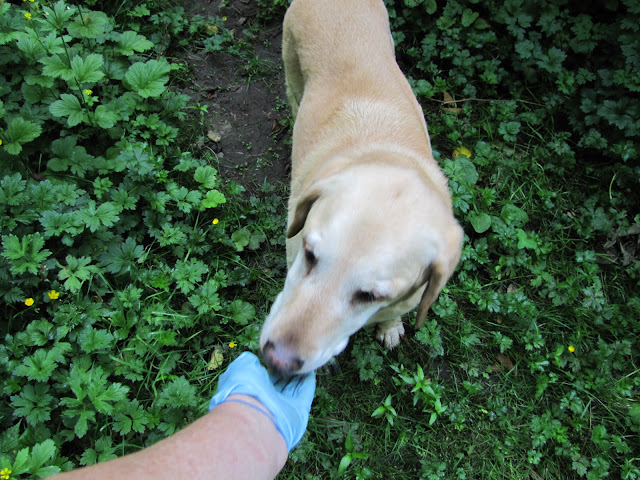 And then back down the field, which is full of daisies 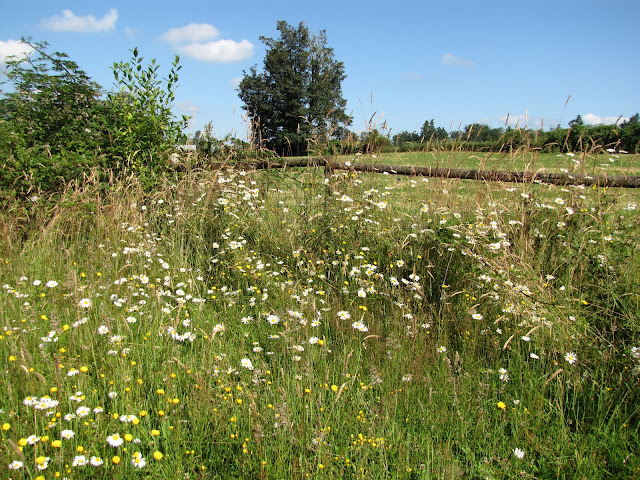 And watch out for the stinging nettles, they are always out to get you:( 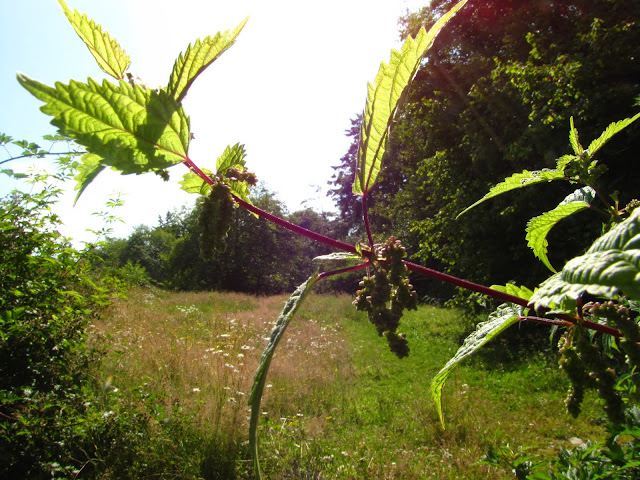 So after I've done the walk, pulled carrots and beets, picked any peas or beans, dug up some potatoes, picked some of the flowers at least, it is time to head off and get to the market to help Larry pack up.  It's nice to have someone to help pack up, especially if it is a hot day.
Then while I'm in town, I usually do some grocery shopping.
After we get back home, I have to go through and try to restock the jam that was sold with what I have on hand.  As soon as some shade comes onto the garden, we start picking the rest of the flowers.  Somewhere in there, we usually take the dogs for another walk.  Then there are eggs to collect, clean, get into cartons and label.  Then I have to convince myself to start putting together bouquets.  Last night I only got 8 done, before I had had enough, and that was 12:30 am.  To bed, then up again by 6, and start and pick the greens for Sunday's market.  That takes longer because we take more to that market, and we actually need to leave earlier.  It was a real rush this morning, and too much to take, as we had to take all the buckets of flowers I hadn't made up yet.   In the end we took the car as well.  I stopped and walked the dogs at the tree farm (less than 15 minutes) while Larry continued on and got started on the setup.
At the tree farm, Luna scented on a very large, what I hope was a garter snake.  The biggest one I have ever seen, although I only saw part of it.  Then there was a buck deer that went bouncing off.  Thank goodness I saw it before the dogs, so was able to keep them under control, Yay!
Then after the market is over and we have packed up, which takes nearly an hour, we go for something to eat, and then go and visit our mothers, who live close by.  So we usually don't get home until the evening, and by that time we are pretty well done in!
And then tomorrow, time to start all over again, getting ready for the next weekend.
Posted by Karen at 10:33 PM