It's always fun trying to think of a catchy title for a post, like an alliteration, or using part of a well known saying, or something just interesting sounding that would catch a readers attention.
Well I think I had come up with a good one for this one, but because I didn't use it right away, or write it down, well I seem to have forgotten it, if I had ever thought of one in the first place.  Yeah, I can't even remember that.  Yep, I'm at that age.
The alliteration I did use is not the one that I think I forgot, and if I ever remember it, I'll change the title.
Anyway,  I love to buy plants, but actually putting those plants in the ground is a whole other story.  I think those impatiens have been sitting in that flat at the front of the house for a couple of months.  They actually don't look as good as they appear in this photo, the leaves are yellowing, but since they have only got the hose aimed in their direction every time they looking wilty, I guess they are doing pretty well.   The tomato plants not so much.  I have a couple more flat of plants like this, and am slowly picking at them, trying to get them in the ground before we go away.  Don't want to have to ask the remaining family members to water them, and besides, if they don't get in the ground soon, I might as well just throw them on the compost pile. 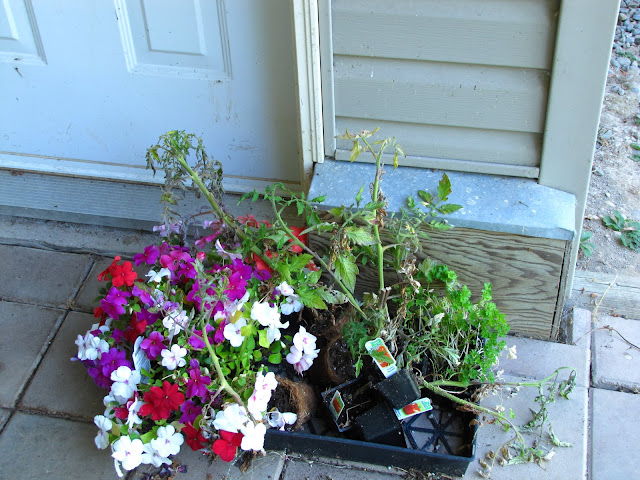 Last week my favourite nursery, where I bought all those other sad plants, had hanging baskets on sale for $8.  I bought a few, and at least with those I can just hang them up and hope to remember to water them before they wilt.
I really hate having to water things.  House plants have to learn to go months at a time without water, I kid you not. 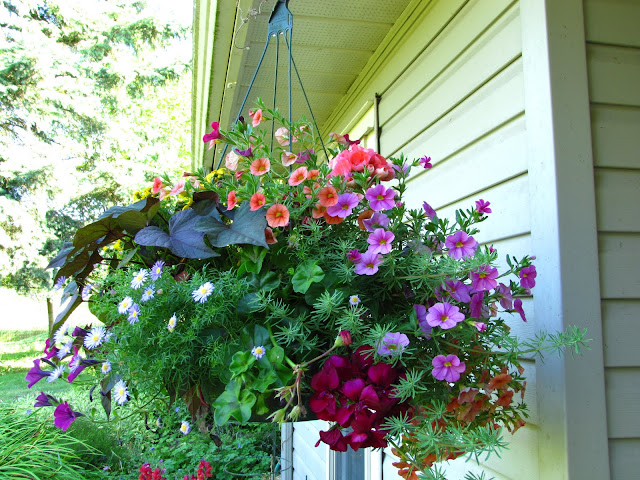 I planted quite a few potatoes in the spring, but have now dug up and sold them all, other than a couple of small rows I have kept for us.  I was wishing I could plant some more, but seed potatoes have disappeared from the store, and it is a bit late anyway.  Last weekend I was in the gardening section of a major grocery chain, and spotted some boxes of them, piled on a cart, obviously destined to be disposed of.  Anyway, they wouldn't give them to me, but for about $.75 a box, I brought home two.  I had already planted this variety in the spring, and it is an early potato (takes less time to mature), so I'm hoping that there is enough time left for them to do somthing. 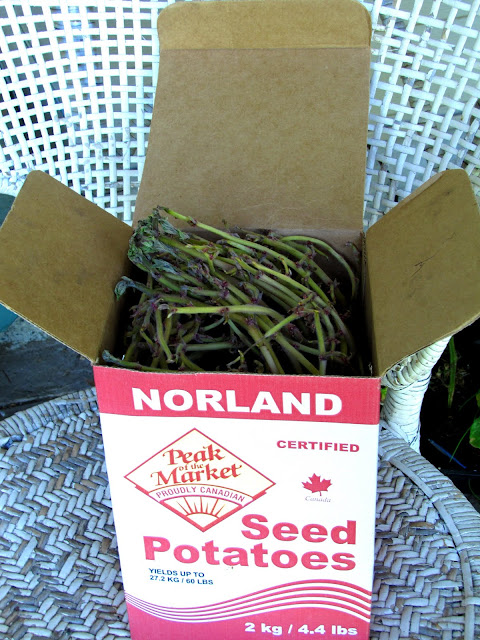 The shoots on them are huge, but I managed to get them all in the ground without breaking a single shoot. 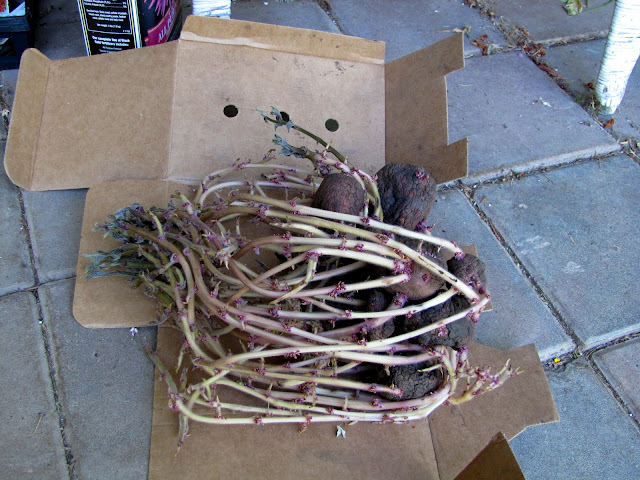 I took them up to the orchard garden and put them inbetween the row of dahlias and peas/beans
Luna quite often hangs around, because well...she wouldn't want to miss it if I started up the sprinkler or the rototiller. 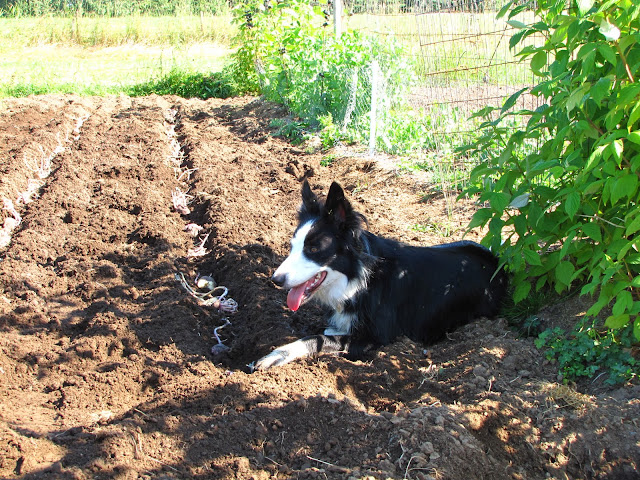 The shoots were so long I just laid them horizontal in the trench. 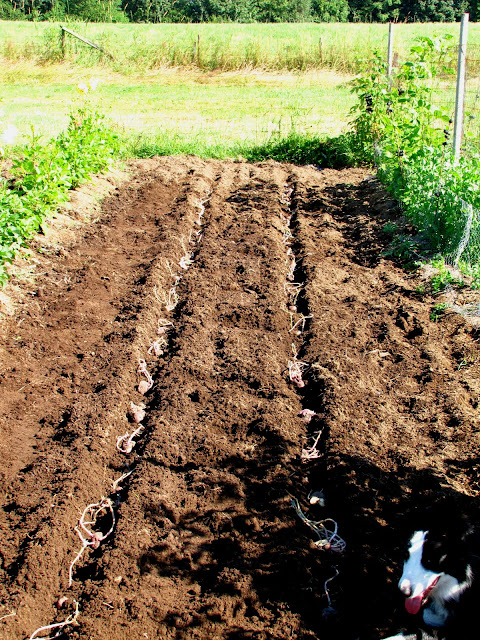 And then hilled them over 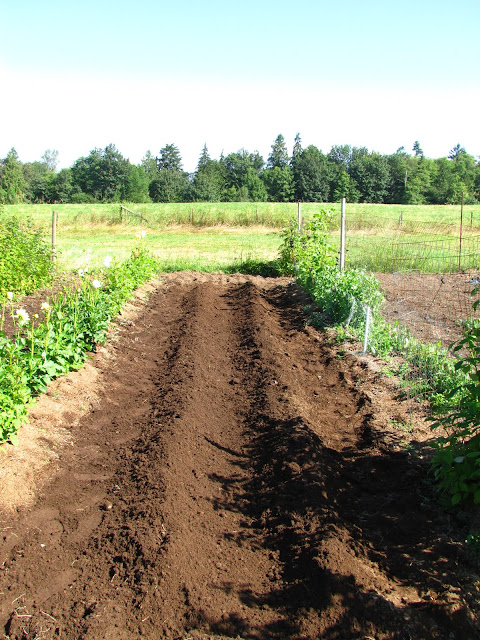 And on the way out of the garden, I spotted one of the first blackberries of the year. 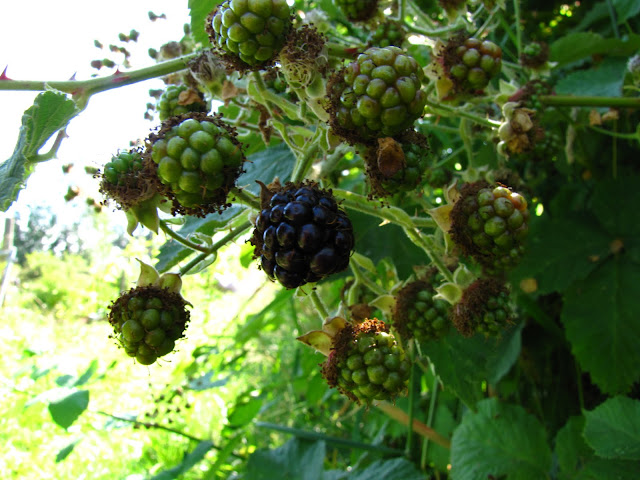 There are many, many, many more to come.
Posted by Karen at 1:14 PM