For years we have struggled along doing our hay.  Well mostly it is the baling part, but if you can't get it baled and off the field, you don't really have hay.  Yeah, yeah, I know in the olden days, they used to pile it loose on wagons and then lift it into the huge hay lofts, but if you don't have a huge hay loft and the means to get it up there, well then you need it baled.
When we were first married, we lived on four acres on Matsqui prairie.  We had four horses then, but we still had excess pasture, so we needed it hayed.  We hired someone to do it for us, which usually means that the hay doesn't turn out as good as it could.  Then a couple of years later we came across someone selling off a bunch of old haying equipment.  Seven pieces for $600, but we had to take it all.  A sickle mower, a tedder, a huge old rake (we had to rent a trailer to get that home), an old baler, plus a plow, a disk, and a blade.  We knew nothing about haying, but we struggled along and managed to get the hay baled the first year.  The second year the hay was dryer and was coming out of the baler in bales so loose that they just fell apart.  We did eventually learn how to adjust the baler to tighten the bales up.
The sickle mower was repaired numerous times, but we eventually gave up on it and it was replaced by a disk mower.  The big old rake worked best in large flat fields, and we eventually replaced the tedder and rake with a haybob.  That is a dual purpose implement that both teds (fluffs up the hay) and with some adjustments, rakes the hay into rows (windrows).  Like many things that do multiple jobs, they aren't quite as good as something designed for a single purpose, but it works well enough for us with our small, non flat fields. 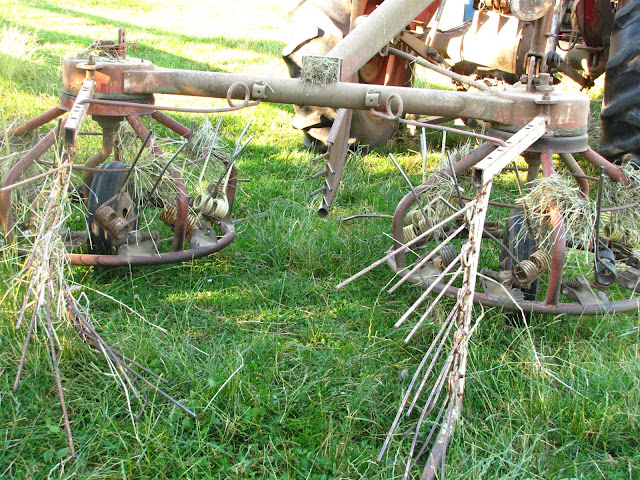 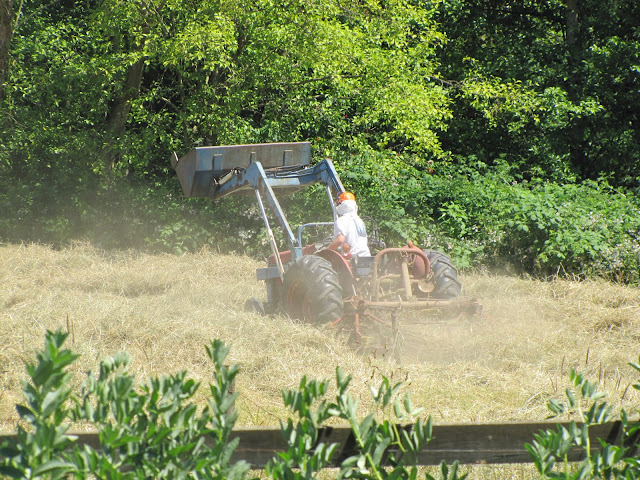 The baler, when it worked well, was great, but when it didn't, well there were multiple stops to re thread baler twine, sort out why it wasn't tying the bales properly, whatever.  At various times neighbours helped us out with the baling, but over the 25 years or so that we used it, Betty Baler did a lot of bales.  I used to give it a pat and thanks if we had a particularly successful baling session.  Anyway, at the end of 2008, Betty really seemed to pack it in, and being nearly 60 years old at that point, she probably deserved retirement. So we parked her and hired our neighbour to do our baling last year.  He agreed that he would do it again this year as well.  One less thing for us to worry about, or so I thought.
This year we have been waiting a long time to cut hay, so when this weather hit we did it all at once, including a field at another neighbour's.  On Wednesday evening Larry thought it was dry enough, so called Baler Neighbour over, but turns out the hay was not quite ready.  You can tell by how much you have to loosen or tighten the tension on the baler, and they couldn't loosen the baler off enough to make decent weighing bales, they were coming out too heavy.  Which meant the grass was too damp and was sticking in the baler and more hay than should be was getting pounded into each bale.  Now why it took 20 bales for that to be figured out, I'm not sure.  Just before dark, when it was as cool as it was going to get, and we could still see, we went over there, cut the 20 bales open, and spread the hay around to continue drying. ( It hit 34 here on Wednesday)
So Baler Neighbour said he would come over after he had baled his own fields, which he had cut the same day as us.  Larry raked all our fields yesterday, and we waited.  I'm thinking that the hay is just getting burnt out there, and if it was almost dry on Wednesday evening, by yesterday afternoon it would be plenty dry enough (our thermometer hit 36 yesterday).  We waited and waited and finally called him after supper.  He said his baler wasn't working properly, and he was getting parts in the morning.  Okay, fine, everyone has trouble with their equipment, but why didn't he let us know?  Then Larry wouldn't have bothering raking all the fields, which will probably have to be re raked today because the windrows will have drawn moisture up from the ground overnight, and will be damp in the bottom.
Baler Neighbour comes over this morning.  I can hear Luna barking like mad, and he is stood on the driveway inside the gate, not moving.  I go out and he says that Luna has bit him:(  Since I can't see an actual bite on his bare calf, I assume she has nipped at him, but there is nothing I can do at this point.  Kind of scary though.  She is very protective at the gate and I do have a sign about waiting and honking, but it is funny how people seem to assume that it doesn't apply to them.  There have been two other men that have come in, full of confidence, totally ignoring Luna, and she has barked at them a little bit, but didn't seem that bothered about them.   Maybe BN was worried and showed it, or bent towards her and tried to sweet talk her, who knows.  Frustrating though, when I thought things had got quite a bit better.
Anyway, BN says he is going to start baling about noon, and says that he doesn't usually rake until the day he bales (as in, why did we rake yesterday?).  Yeah, we know that, we thought it would be baled yesterday, I said.  He said that he said he thought it would have to lay until today.  Umm no, it was ready yesterday.  Anyway, hopefully our no longer green, dried out hay gets baled today.  And then my stress level can drop. I hope.  And d*mn, there's no chocolate in the house..... 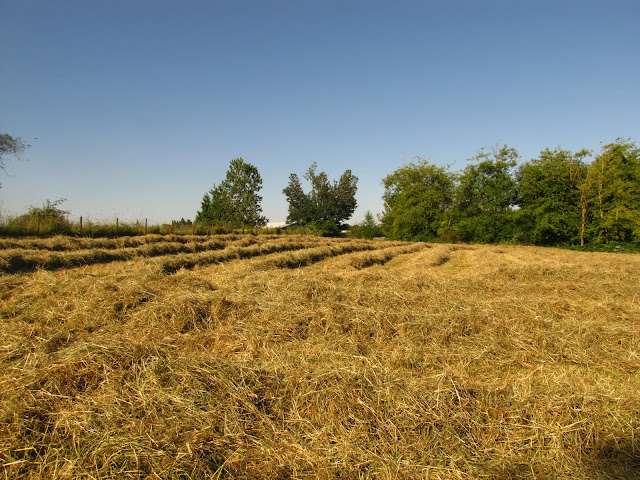 Well if you can't bale it, you might as well have some fun with the dogs in it. 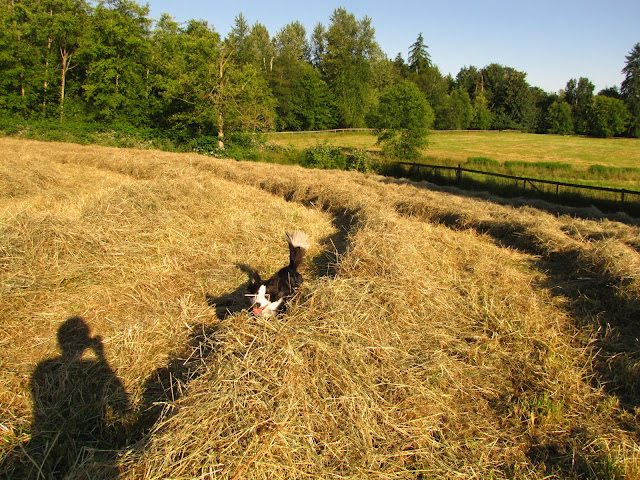 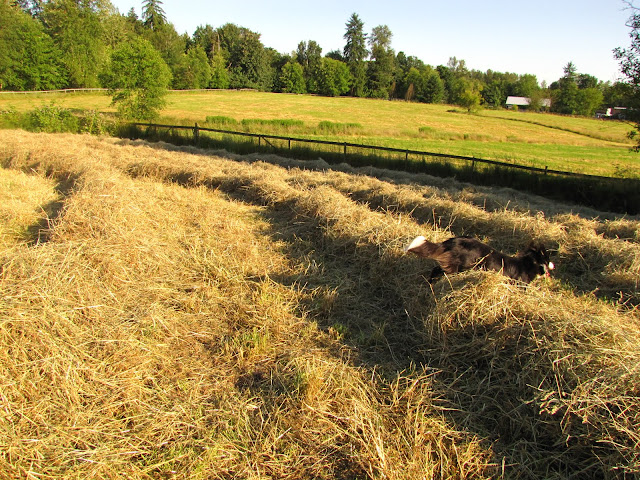 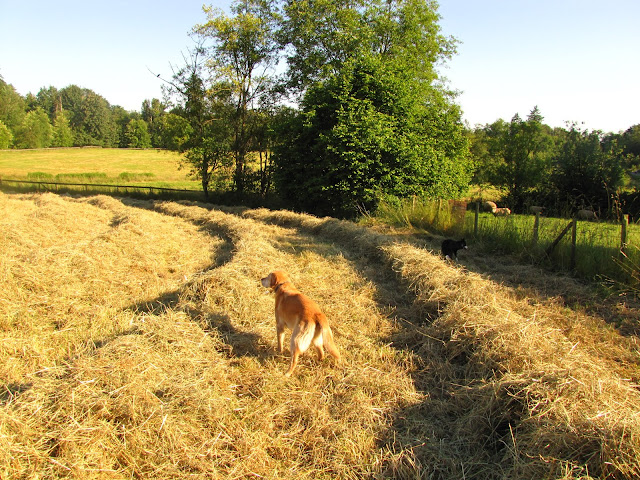