It ain't over until the last bale's in.

Well it's great to have all the hay baled, but until it is all under cover, you can't feel too smug.  Our weather forecast was for continuing warm sunny weather, so we weren't feeling a lot of pressure to get it all picked up.  Which is a good thing, because going to two farmers markets on the weekend is hectic enough, with not a whole lot of free time.

Last night though, just before dark, I didn't like the look of the sky, and when I checked the weather forecast, they were saying a 30% chance of showers.  Amazing how the forecast can change so fast.  Now 30% isn't much, but if you happen to get a shower, well all of a sudden it is 100% over your head, and rain and baled hay don't go well together.  David had gone out, but fortunately not too far, and he was fine with coming back home to help us out.  A tall, strong 22 year old male is half of the haying team. It's amazing how high they can heave a bale.  Meredith got to drive the tractor, the easiest job, but it just makes it faster if someone is constantly keeping the trailer moving to the next bales.

Ours is an older tractor.  There are two gear sticks.  One is a high or low, and the other one is reverse and gears one through four.  Years ago when Meredith was very young, maybe 6 or 8?, we had put her on the tractor to steer the trailer around the field.  The tractor was supposed to be in low gear and in speed one or two on the other stick.  Low is reeeeeally slow, so no problem.  Well somehow the tractor ended up in high, instead of low, and when the clutch was let out, the tractor bounced  off across the field, a terrifying 6 year old hanging onto the steering wheel.  Fortunately it wasn't faster than Larry, who sprinted after it and was either able to leap on and take control, or reach over and pull the knob that turned the tractor off.  Talk about a heart pounding, slap ourselves upside the head moment.  We never made that mistake again.  Meredith steered the tractor lots of times, but we triple checked that it was in the appropriate gear, and made sure she knew how to stop it if she had to.

Anyway, last night, by dark, we had 147 bales loaded on the trailer and tarped over.  There is still another field with nearly two hundred bales in it, but it was the least desirable of the hay, so if anything has to be sacrificed, that is it.  And as I am typing this Monday morning, there is a decent  bad shower coming down right now.  A few choice words have been said:(  Hopefully it won't come to much, and will dry up and we can get those bales picked up.

And with the ongoing Baler Neighbour saga.  Over the years he has helped us out various times when we have had equipment problems.  And we have returned the favour by helping him to load his hay.  He has the big 'toys', and we have the manpower, which worked well as he needed help getting those bales picked up and stacked.  Anyway, we want to stay on good terms with him of course, but it is a little frustrating when you feel like you are being overcharged (that's my opinion).  Larry said more than once that if he needed any help, to let us know.   Most of his bales are now the big round ones, so we can't help with that, and we didn't get asked to help with the square ones.

Because I am the way I am, I started enquiring around as to the going price of custom baling.  I phoned the husband of someone I used to work with.  When I told him the price BN was wanting, he said 'that's too much'.  Not every one I talked to was able to give me an answer, but I enquired online locally, and the answers I did get were for less than what we paid last year.  On the way back from the market on Saturday, I kept my eye open for people baling hay, and found a couple.  The first one couldn't really give me an answer (but he was younger, and kinda cute!), but nice to talk to and look at as well:).  The second one was older and tall and weathered, and quite the character.  He said he charged HALF of what we paid last year!  When I told his what BN was wanting us to pay this year, he went on a real rant, about these people ripping other people off, blah blah blah.  Well, he was not as nice to look at, but sure was entertaining to listen to:)  So I got his name and phone number for future baling, and shook his hand.  He had one of those finger crushing hand shakes.  You know what, I would take that any day over one of those limp shakes that so many people seem to offer these days.  I have a pretty firm handshake myself, and so many people seem to stick their hand out, and it is like a limp fish, with no conviction in the grip, or more like no grip at all.

We haven't paid BN yet.  Yes, we should have got a price from him before we started, but also, wouldn't you think if he was going to put the price up, as a neighbour he should have told us BEFORE he started?  Last year he said he would check around and charge us the going rate, so we assumed it would be fair.  And I am okay with paying last years rate, but not okay with what he wants us to pay this year.  Anyway, chalk this up to being a 'live and learn' situation I guess.  It is just another part of this rather bizarre year with it's weird weather and growing season. 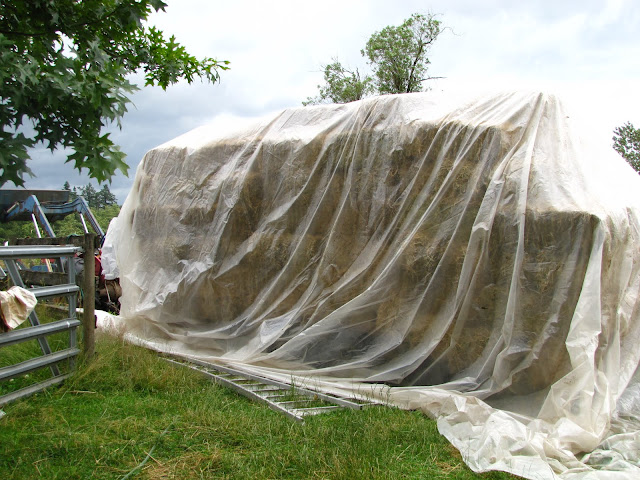