Sooo.... after all the cloud and rain and lack of sun, that hot dry summer they kept telling us we were going to get, is hitting us this week.  Dry and sunny and highs of 28-34 degrees.  We are gonna die!  But it makes for great haying weather, so that is what is happening this week.  We are small potatoes in the haying scheme, with our small equipment and our small fields, but it is a big deal for us while it is happening.
This has got to be one of the latest, if not the latest date we have ever done a first cut.  Sometimes we are able to cut before the end of May.  But, for us, it is entirely weather dependant, as we are still making the small rectangular bales.  The guys making the big round bales are able to bale theirs wet (silage) or partially dry (haylage), but ours has to be really dry.
So on Monday Larry was out cutting.  The grass is really high, but not extremely thick, so the cutting went well, with no grass piling up on the mower or under the tractor or around the PTO shaft. 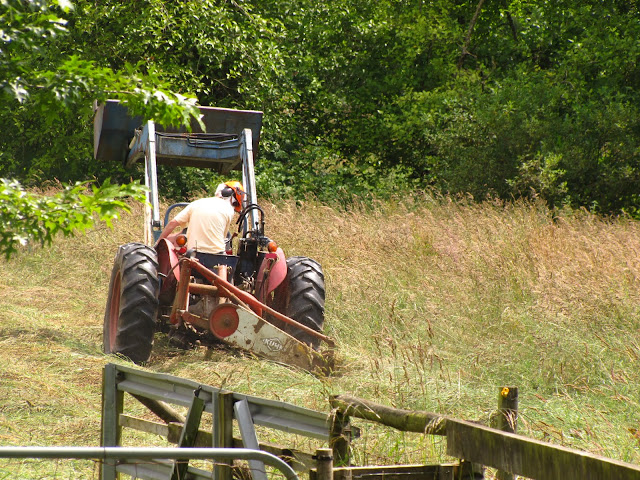 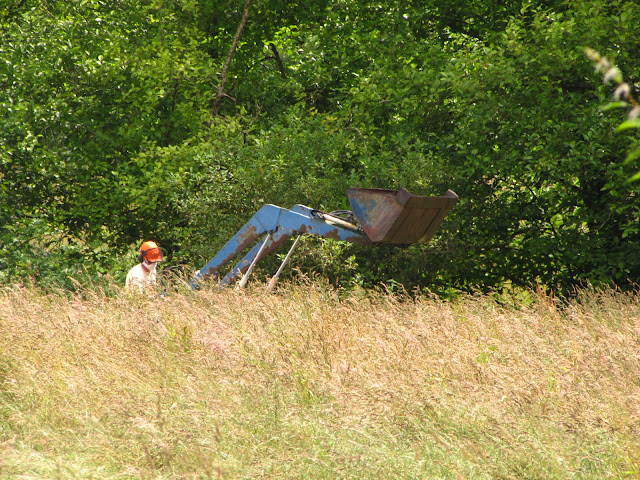 Yesterday it was tedded (fluffed up and thrown around) twice.  Larry did it once and I did it once.  The tedding and raking used to be mostly my job, as quite often Larry was at work, but these last two years he has done a lot of it.  The hay will get tedded again today, and will probably be baled tomorrow.
In the meantime, I have been dealing with a lot of fruit.  Four more flats of strawberries were hulled and put into the freezer.  I've found that the best thing for hulling strawberries is the tip of a thin teaspoon, cradling against the first two fingers of one hand.  I have one of those strawberry hullers, but the spoon works better.
Then there was another flat of gooseberries to top and tail.  I've had enough of those for this year, so won't be buying any more.
And then there was a flat of black currants.  Have I mentioned how much I hate dealing with blackcurrants?  They also have a stem and dried flower on each berry, which has to be removed if you want to make jam, and since they are so much smaller than gooseberries, well, no thanks.  I spent too many hours as a kid topping and tailing blackcurrants.  So I make blackcurrant jelly instead.
You have to add a lot of water to blackcurrants to get any juice out of them, and even then it cooks up to be a thick globby mess that takes forever to strain.  I always seem to end up with the kitchen counter covered in pots and strainers and seives as I try to do it all at once, and black currant juice splashed everywhere.
This time I thought I would get it cooked up, and then leave it to strain overnight. That way I wasn't fussing around it all the time, trying to hurry it up.  I got it boiling and then turned the pot down to the setting I usually have it at if I want to simmer anything, and thought I would leave it for a few minutes.  I come back a little later, and the d*mn stuff has boiled over, even at that low setting.
So I leave it to drip overnight.  Even then I had to have more than one container, as it doesn't strain fast enough that I could pour all of it into one.
Anyway, yesterday morning it was all strained, and there was just bagging it and doing the big cleanup. 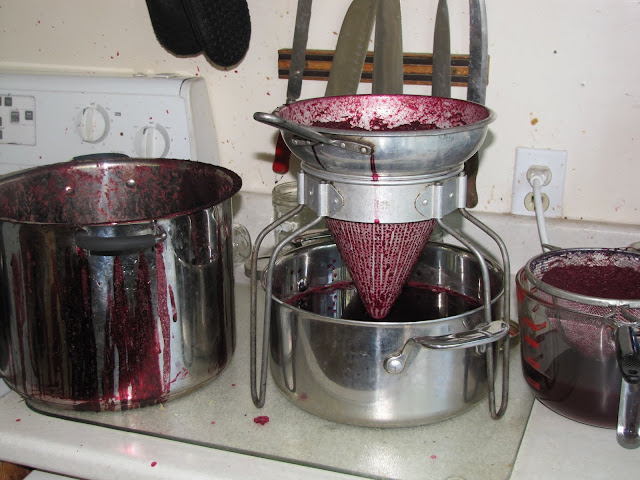 On a good note, our own black and red currants are awesome this year.  Never have they looked so good, so most of the currant jelly I make will be organic.  I picked a bucket last night, and am heading out to get some more this morning.
Posted by Karen at 9:10 AM