A while back Larry bought himself a new toy.  I think I've probably 'played' with it as much as he has.  So this particular day last weekend, we took it to the bush with us when we took the dogs on their morning walk 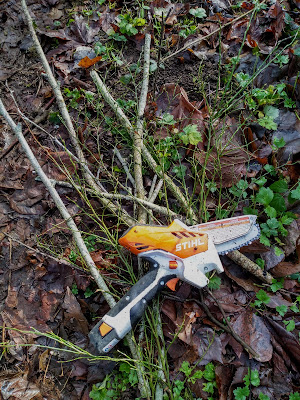 Our bush consists of mostly alders with the occasional big leaf maple, cottonwood, birch and coniferous tree thrown in.  We've lived there long enough now (34 years) that the alders are reaching the end of their life span.  Of course many of them were big when we moved here, and i just googled that they live 60-100 years.  Our house is about 60 years old. They are sort of a weed tree, but make great firewood, and since we depend on a wood stove for some of our heat, they are a good tree to have.  But the last few years we have noticed that there are an awful lot of dead ones, and without their canopy throwing shade on the ground below,  there is nothing to stop the blackberries from moving in.  This tree volunteered itself for firewood just recently, so this day I had the 'toy' and sawed all the underbrush away along one side of the downed alder so that Larry had a decent space to work with the chainsaw. He will be sawing it up tomorrow. 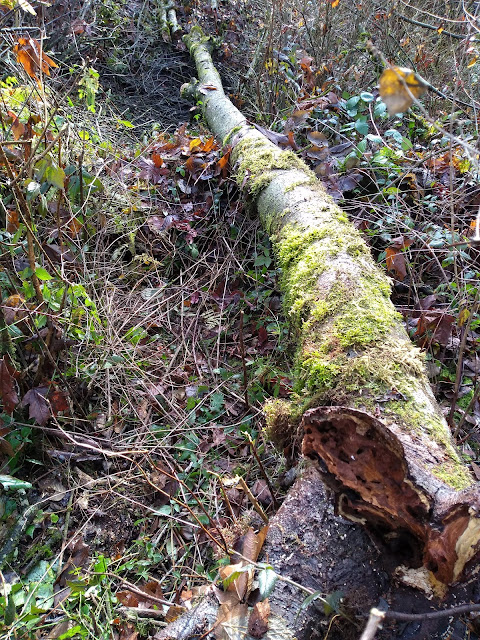 It was a relief that day to finally get some sun and blue sky.  We seemed to have had endless grey days and rain for a long while. 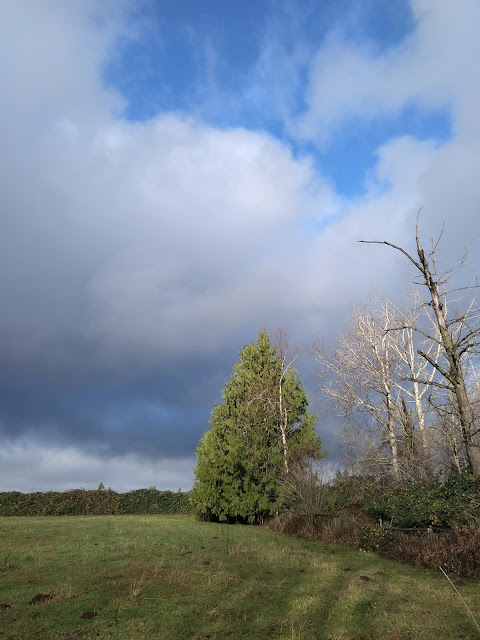 Although the sky hadn't quite figured out which way to go at this point. Looking north 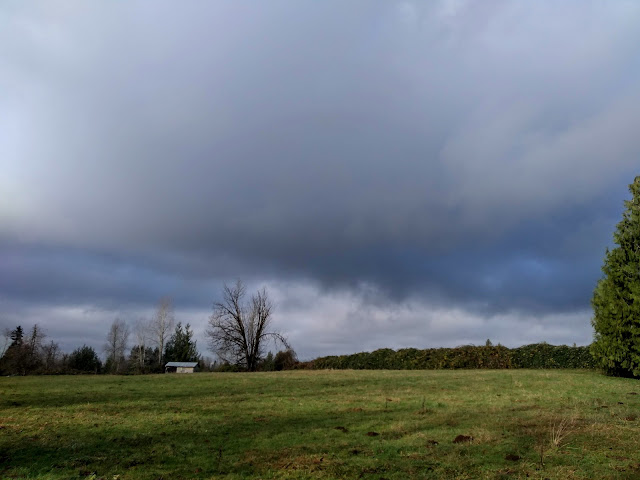 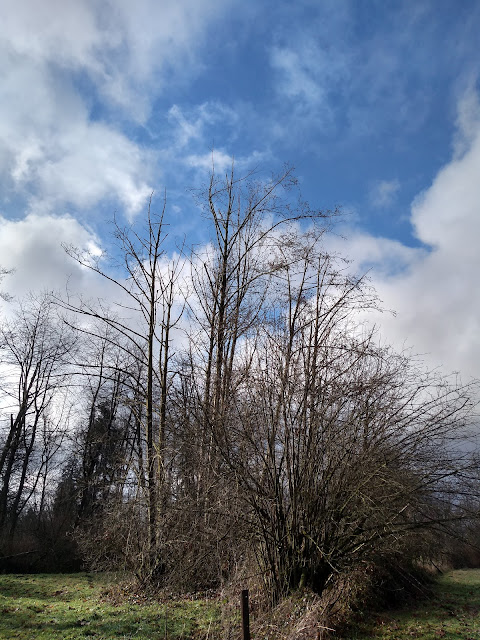 While I'd been playing with the mini chainsaw, Larry had cut up some bigger stuff .  We decided to just bring back wheel barrows at a time.  The ground is so wet the tractor will make big ruts out in the bush, and it is not four wheel drive so may get stuck.  A little foreshadowing here for my next post, lol. 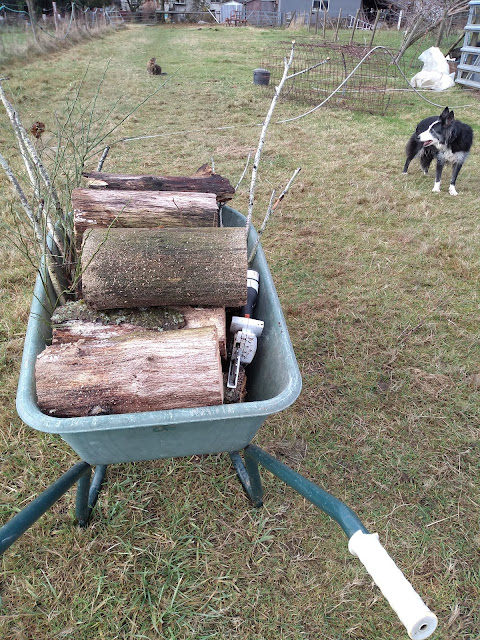 We stopped at the garden on the way back.  I asked Larry to help me get the bale of shavings off the top of the tomato scaffolding.  It had been up there to make a sloping roof for the plastic I had thrown over the whole structure.  We were laughing because it was so awkward for Larry up there and the bale is really heavy and the plastic had a few tears in it, so parts of the bale were wet, which made it even heavier.  Finally he got it rolled off and it didn't split open when it hit the ground.  I just made sure I was out of the way! 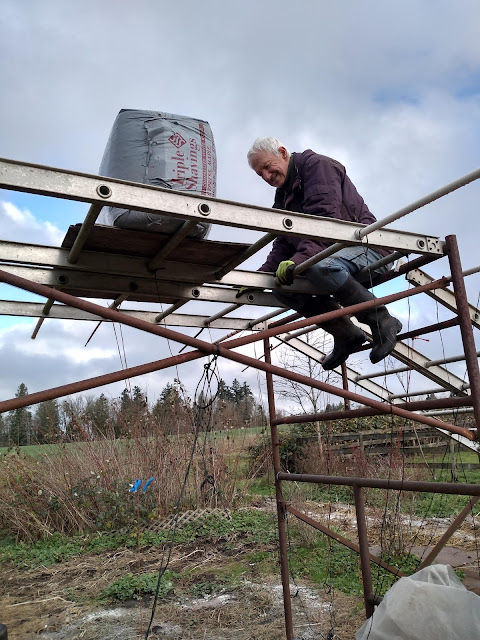 In the afternoon I wandered down to the garden by the house and pulled out the dog x-pens that I had used to trellis the pickling cucumbers on and to keep the rabbits from the broccoli.  It's a weedy jungle out there. 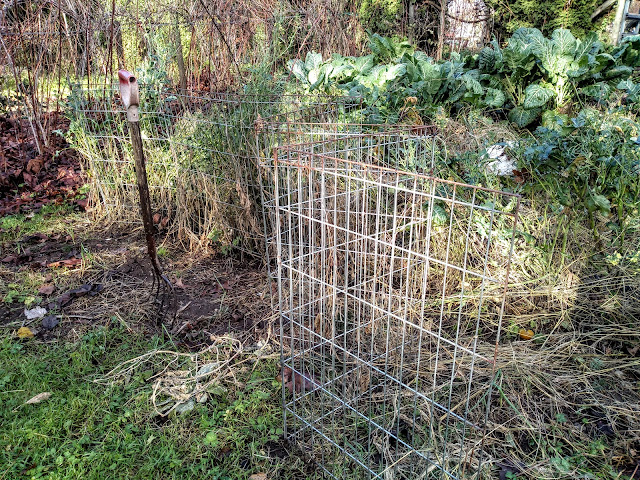 There were still a few tomatoes hanging on in the greenhouse, but they looked better from a distance than they really were.  We need to start buying tomatoes again, how sad! 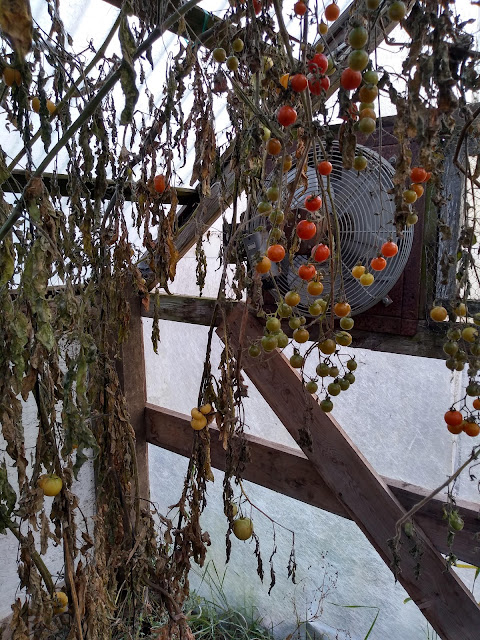 Later in the afternoon I went for a bike ride.  It's been a few weeks I think.  If I ride this way, I always stop at this viewpoint.  Looks like a few people were burning brush piles Ft. Langley way.  The sun was just about to set off to the left of the photo.  Those reddish looking fields in the middle are cranberries. 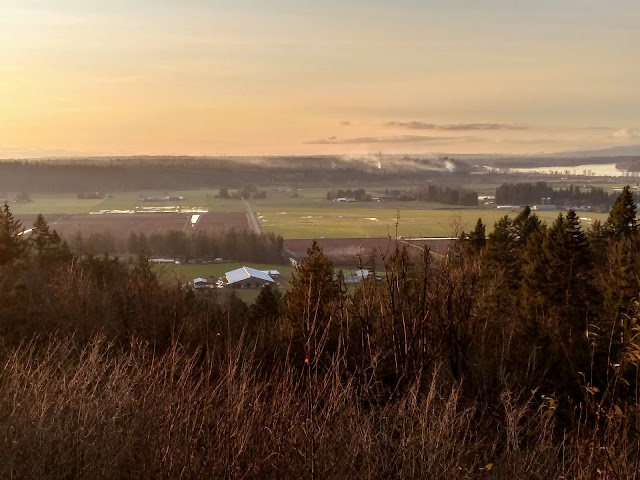 And on the way back, on the other side of the road, looking east.  Barely visible in the middle far distance are Mt. Cheam and it's sister peaks.  And that red field is blueberries. 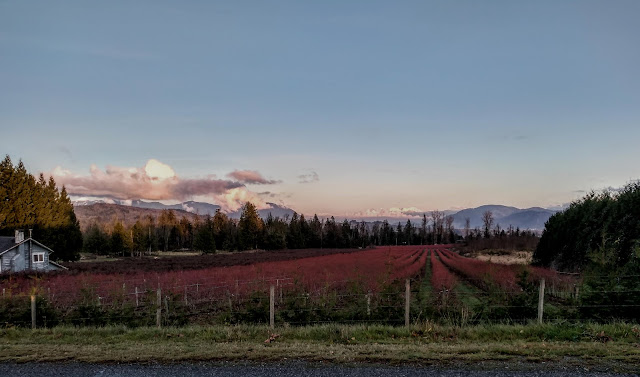 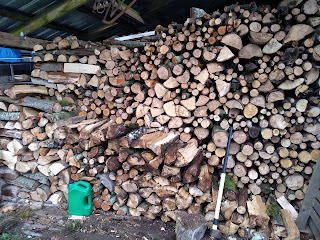