Soooo....I was actually going to do another post, but then saw that I had started one three months ago, so I'll try to finish it it off....
July 16/20
Well so much for me trying to keep up blogging this year.  I guess I got off to a slightly decent start, and then fell off the cliff, never to be seen again.  Almost, until now, and now I've dragged myself up and will attempt a post.  A post I was actually going to do a week ago, oh well.

So with the Covid Crisis we've not done the usual amount of Oliver trips.  It would have been safe for us to do so, but we were told to stay close to home, and we did.   Larry did make a one night trip in late April or early May, to check up on things, and then we all went in June.  By all I mean the two of us and the two dogs.  And then we went again at the beginning of July.  The photos are from the last trip.  They are all taken with the phone, and I don't have an expensive phone, so quality is not the best on some.

Usually we stop at least once during the 4 hour trip, for our own comfort and that of the dogs.  This trip we stopped at 'Rhododendron Flats', which is in Manning Park.  There are wild rhododendrons growing there, and if you pick the right time of the year, you can see them in bloom.  Not really spectacular, but interesting, and there is a nice trail around.  The rhodos were mostly done when we stopped, but we did find a few blooms. 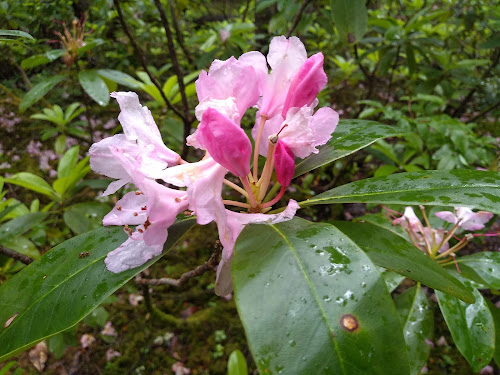 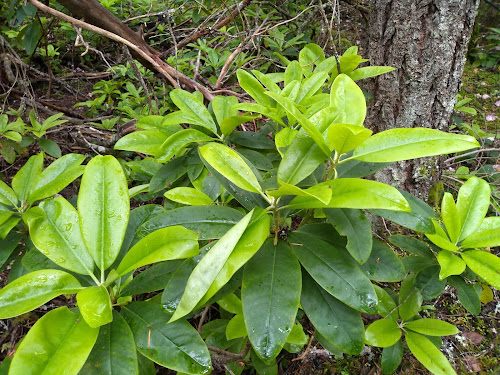 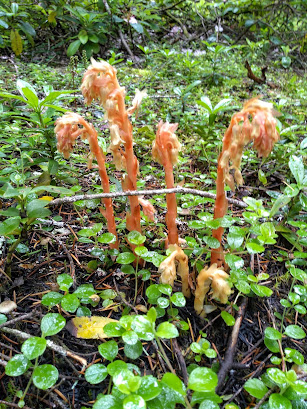 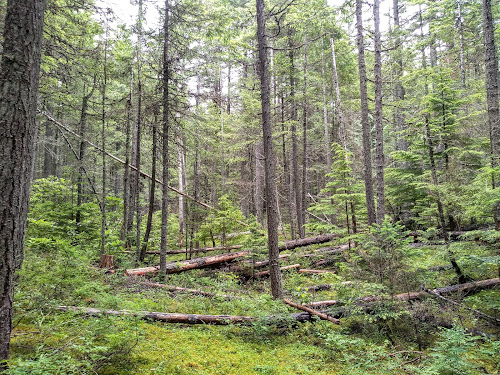 These are Saskatoon berries, picked in the Oliver area.  I picked more in August.  And now they are languishing in the freezer, waiting to be made into jam at some point. 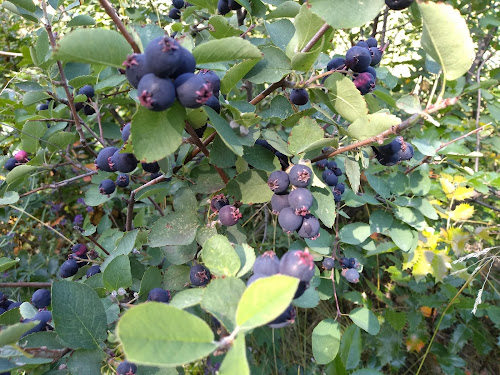 Along the hike and bike path next to the Okanagan River we see a lot of milkweed.  The plants provide food for the larvae of the Monarch Butterfly.  The are interesting plants, and not something we see at home 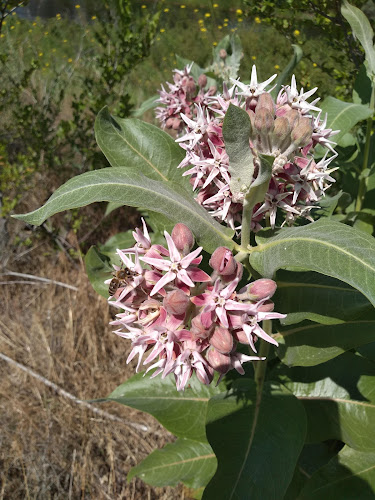 We have a few plants in the little garden at the house at Oliver, but it's hard to keep it nice because it gets so hot there and we aren't there often enough to keep it watered.  The blue is Sea Holly I believe, and the plant below is a little succulent type that I took up there and does well. 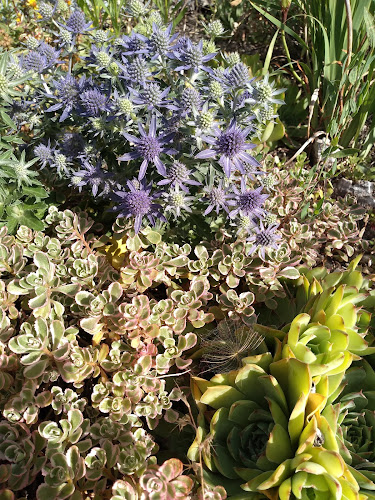 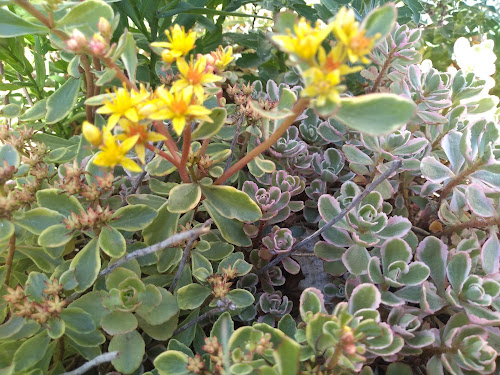 Saskatoons picked and on the dehydrator tray to be shaken around to get all the little bits of debris to drop through the holes.  It works really well for blueberries too! 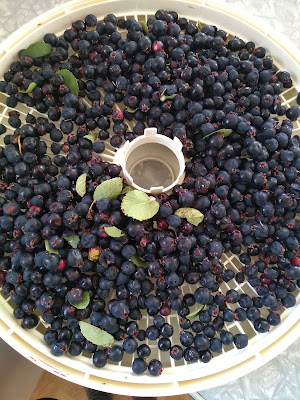 Nice and cleaned up now! 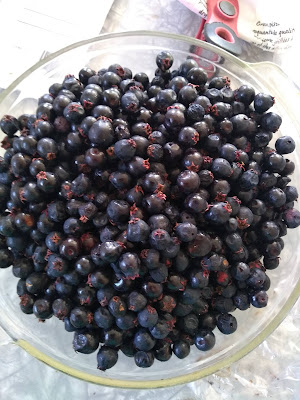 We had a visitor! We see signs that there have been deer in the yard over the winter, but this is the first time we had seen one in the summer.  Jumping out of the neighbours backyard here. 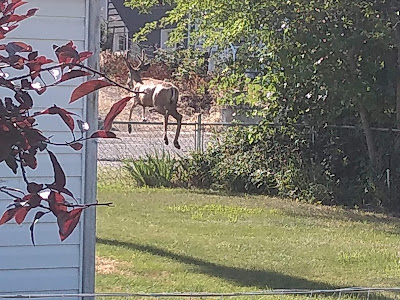 And later peering over our back gate from the laneway. 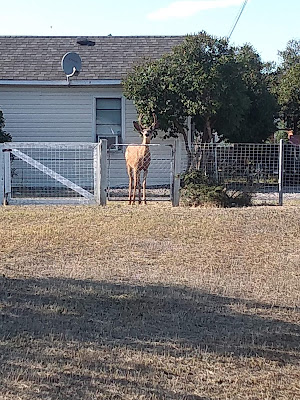 The view from the backyard has improved.  The new neighbours let all the hedging cedars die off and then installed this lattice addition to the concrete and block wall that surrounds their sunken backyard.  I'm not sure about that fence.....I showed the picture to David and he mentioned a Lacrosse Box, lol! 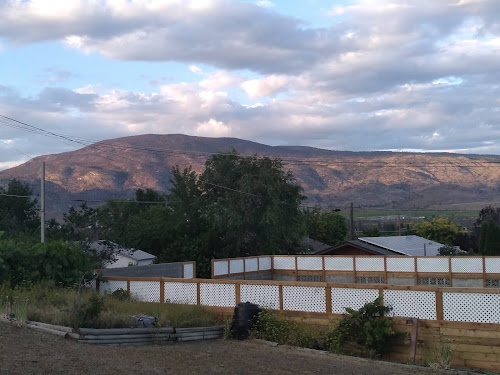 One morning when we got there I set off on my bike about 7am and went along the river to where these golden currants were growing.  I picked quite a bit, but I didn't get much juice from them, so ended up adding other bits of wild fruits to it and came up with a small batch of jam I called Wild Medley. 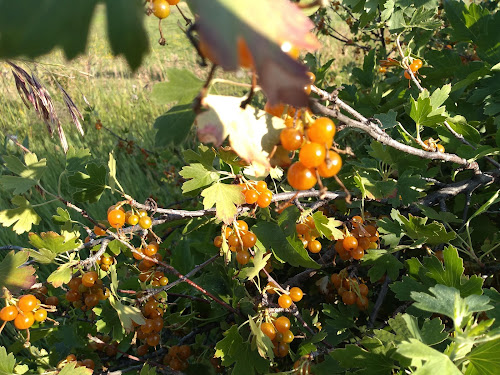 The baby's breath has gone wild there, is considered invasive, but looks like fluffy clumps when it is in bloom. 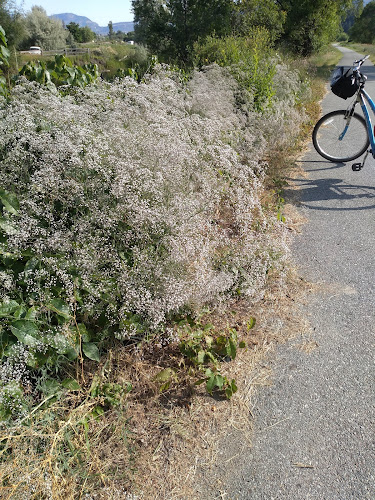 I think on this trip I picked those Saskatoons shown above, notice my handy saddle bags.  They were actually a pain the butt because my heels hit the front edge of them with every pedal, most annoying! I fiddled around with them a few times and eventually  managed to move the bags back enough to miss my heels. 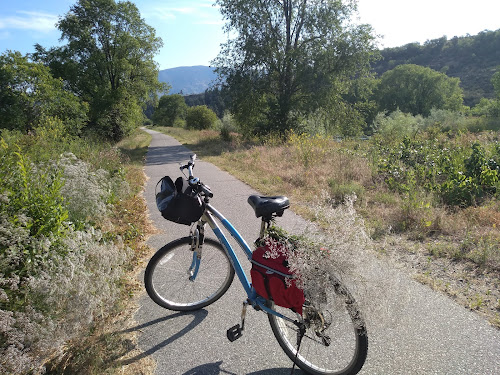 I had kept my eye on this massive thistle, the photo does not do it justice. 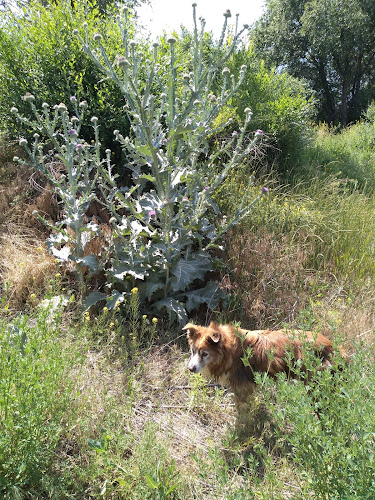 The stems and leaves so silvery, I had seen nothing like it before 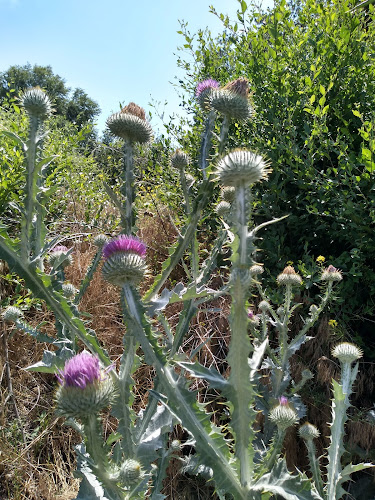 When I got around to googling it, I was shocked that it was a Scotch Thistle.  Well who hasn't heard of that, but obviously I had never seen one before. Another invasive plant. 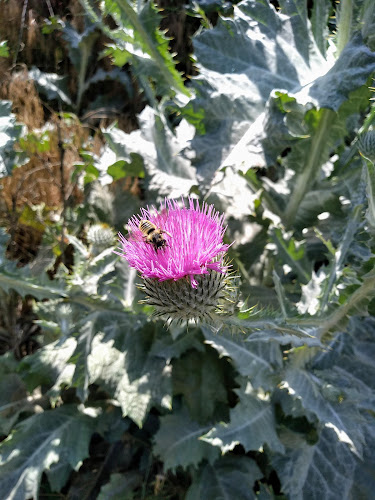 And so there you go, I sort of finished this post.  I had actually come to write another one, but didn't want to waste the first few paragraphs and all the pictures I had loaded for this unfinished one.