They have gone home now, but for 4 1/2 weeks we had these five staying at our place.  Two cow and calf pairs, and that sort of lonely black and white heifer in the middle.  She didn't know the other four when she first arrived, and the cows weren't too friendly to her, but things got better as time passed. 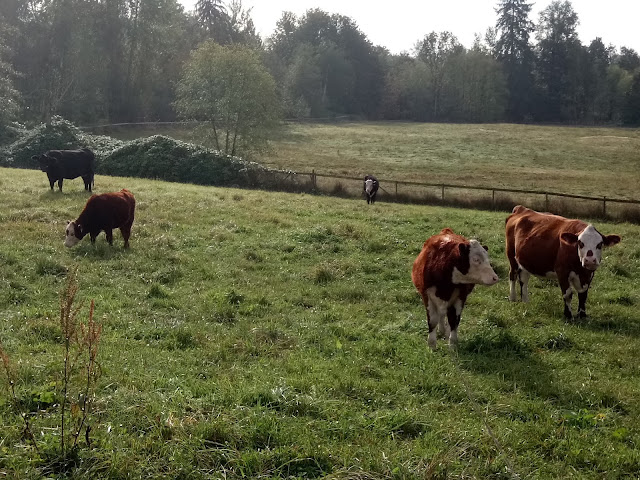 Cows laying down and chewing their cud....kind of relaxing looking don't you think?

After they had been in the front hayfield for a bit, and it was mostly eaten down, we let them out and they headed to the back field. 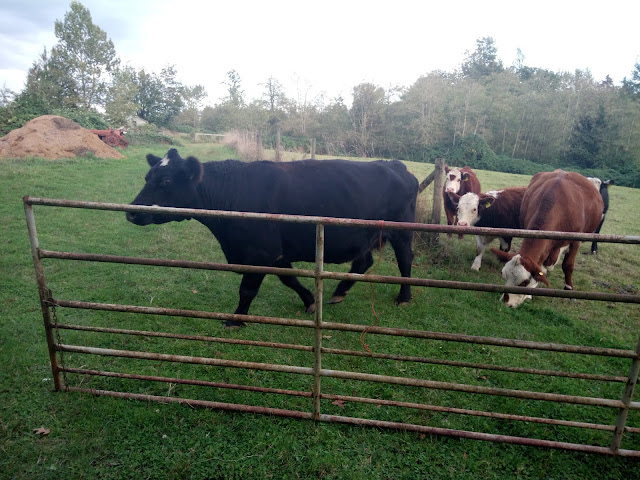 We had a bit of fun.  David's landrover needed some exercise, since he is in England.  The fence in the back field had a spot that needed a bit of fixing.  And because we are the way we are, we didn't fix the fence before the cows went back there. I mean, why be prepared ahead of time, haha!? So we threw a roll of fencing in the tiny box on the back of the landrover, as well as some metal t-posts, a sledge hammer, and a little step ladder to stand on while applying the hammer to the t-posts.  There was no room for the dogs, so they had to ride shotgun with Larry. 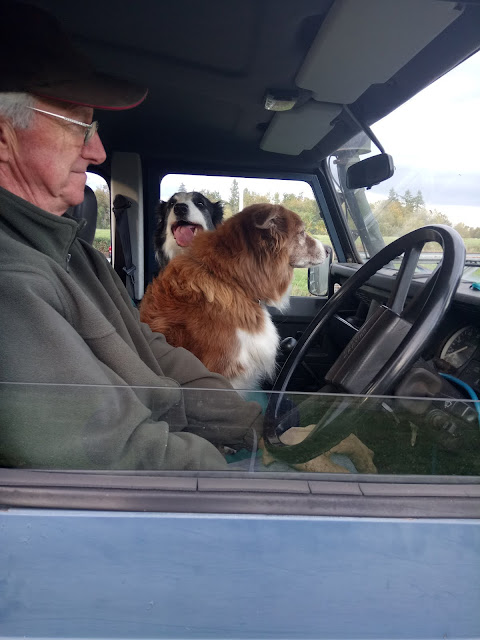 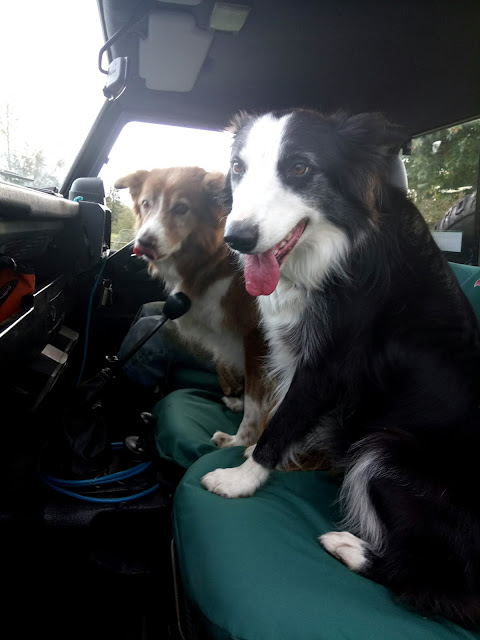 I rode in the back, I had to stand up and peered over the roof of the cab and pretended I was on safari and those were wild wildebeast gambolling along in front of me.  I took some video of the cows cavorting in the new field, and it was quite funny to see those two big cows bouncing around.  It was on my phone, as was the cud chewing video, but for some reason the computer didn't like the longer video of cavorting cows, so you'll just have to imagine those cows kicking up their heels.  On the way back the dogs rode in the box with me.  I don't think either of them were thrilled, and I felt like I needed to hang on to them in case they decided they needed to bail over the side.  They aren't used to doing that sort of thing. 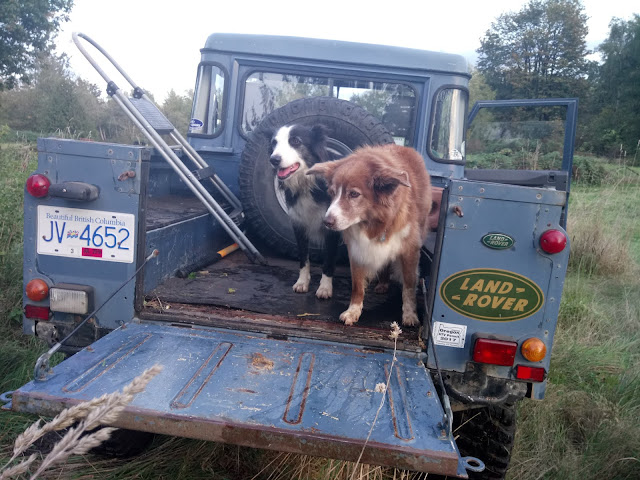 Luna got a bit of enjoyment from the cows, and would always run ahead in the morning when we headed out on our walk, and find them for us. 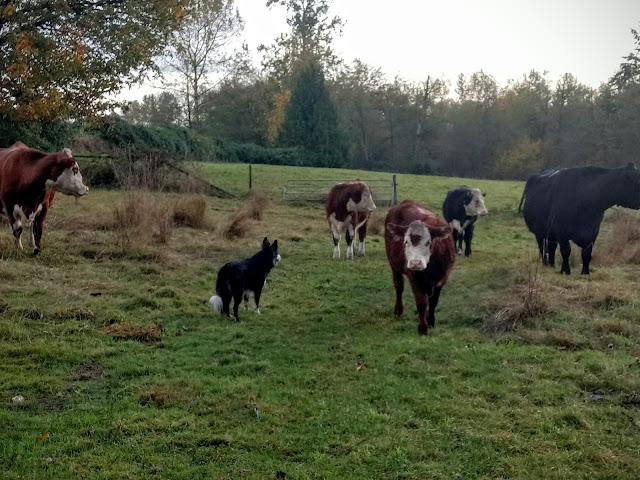 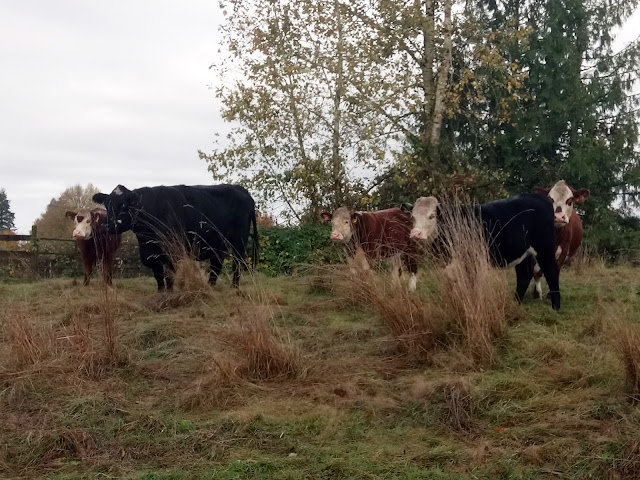 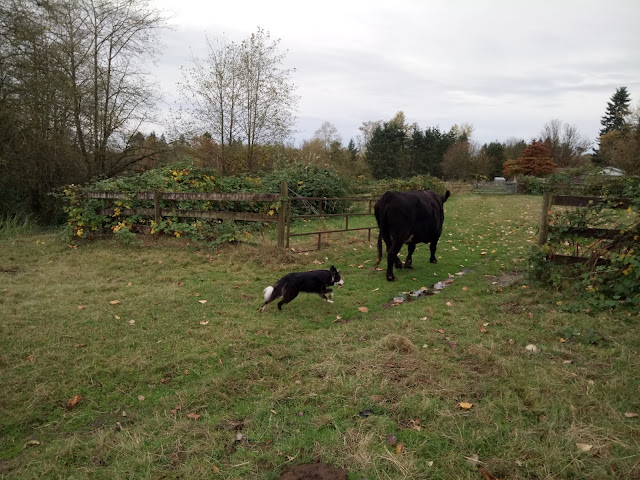 Jake had no interest in the cows at all.  But don't let them too close.....  A calf  tried to get too up close and personal as Jake walked by.  He stopped, turned, showed his teeth and gave a couple of snaps at the calf's nose.  Mind your manners he said. 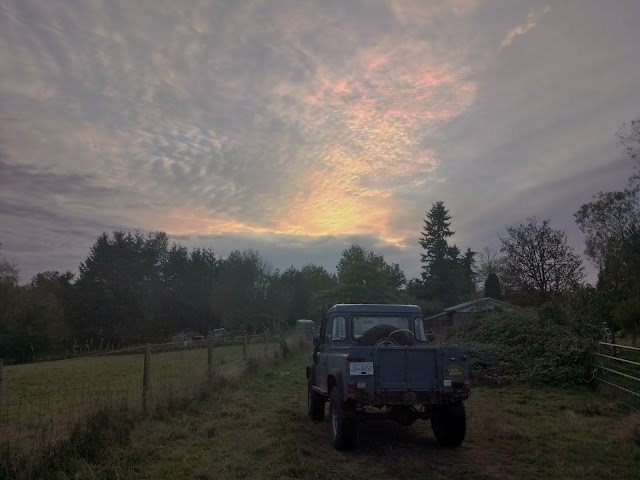