We Can Be a Tourist in Our Own Province Too!

We continued our drive back across B.C., doing the two hour driving shifts, then walk and potty break, and then change drivers schedule.  There was the odd extra stop thrown in there as well.  This was Sparwood, near the Alberta border.
Who doesn't want to see the biggest truck in the world.  Well it didn't really bother me, but I said we should stop, just because. 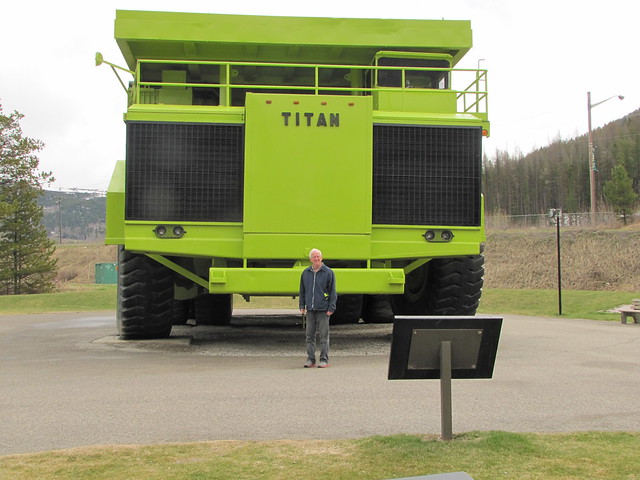 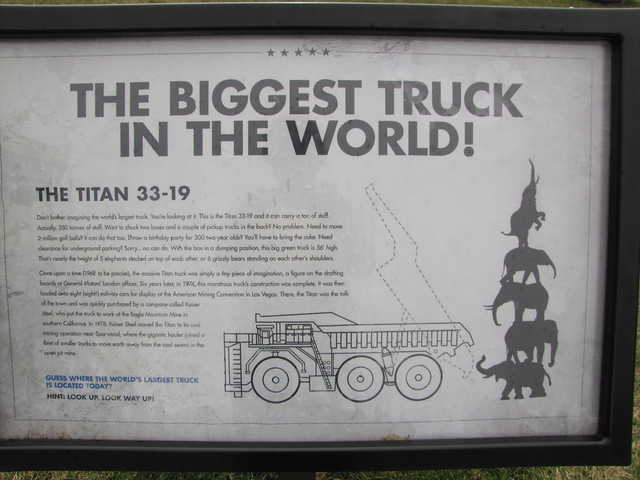 I guess I forgot to photograph the sign that said about having to hand make all the individual parts for this truck when something needed repairing.  Can't remember what it was that eventually had to be replaced, and that was when they decided that the cost wasn't worth it.  So now here it sits. 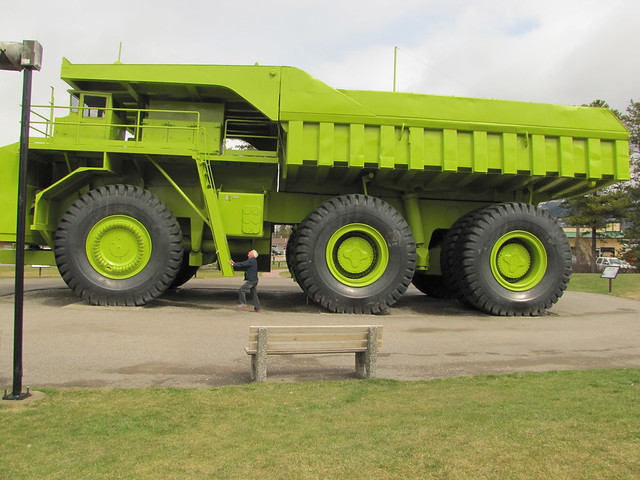 We did see a few elk signs along the way, and then suddenly two crossed the road, and after that we saw some herds grazing in the fields.
Our wildlife count was umpteen deer, a bunch of elk, only lonely scraggy looking mountain sheep, two coyotes, two wild turkeys (I think the turkeys were a first), and a bunch of different raptors in Alberta, and a bald eagle in BC. 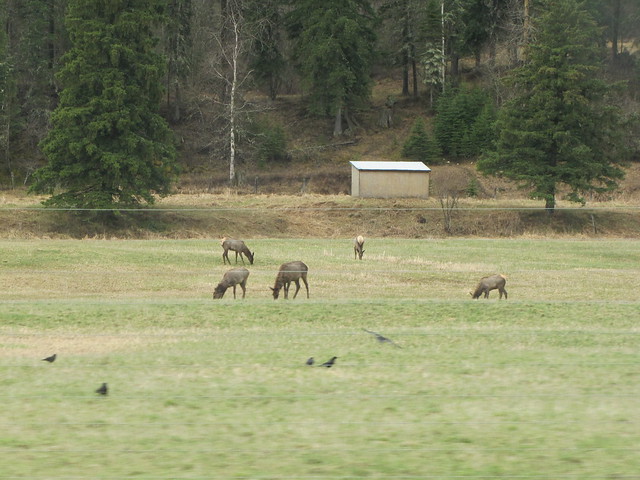 Heading back over Kootnay Pass.  You could see where there had been small avalanches across the road.  I don't think I'd want to drive through here in winter. 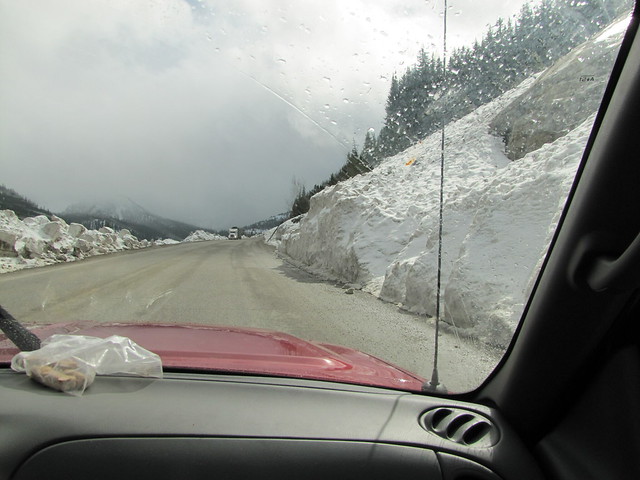 This was a rest stop just east of Castlegar.  We stopped here both coming and going.  This time we decided to take the trail that went up the rock bluff and got these amazing views from the top.  See the rain shower off in the distance?  Right where the river 'ends' in the middle of the picture, is where the highway crosses the river . 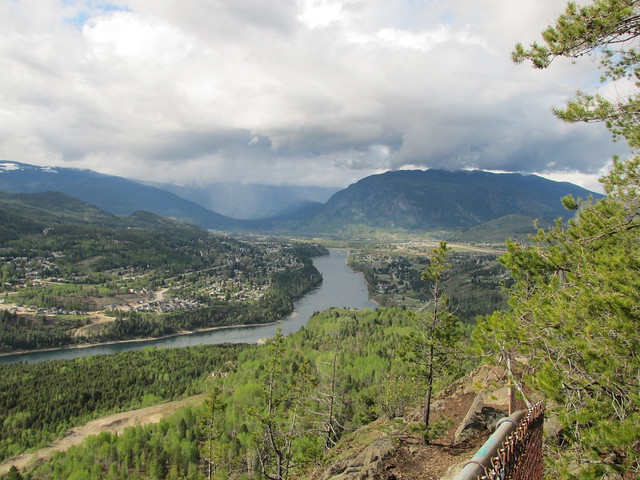 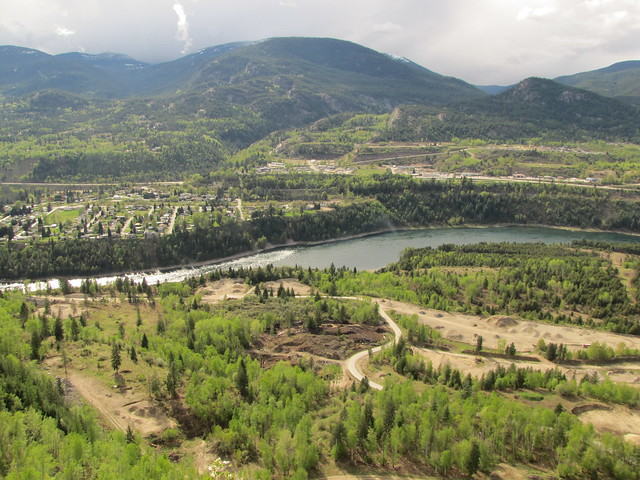 While we looking at the view, there was a bald eagle circling just below.  I managed to get four shots (once again I forgot to just hold the shutter down...grrr), none of which were in focus.  This was the best one.  It was pretty cool to be looking down or straight at the flying bird, instead of having to look up. 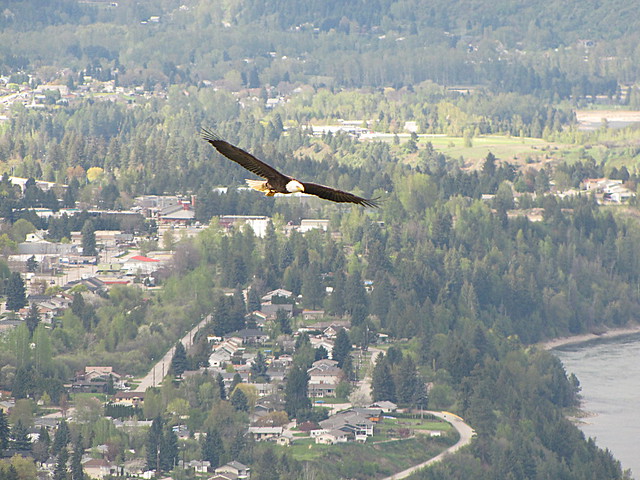 When we got out at the rest stop, I went to get Calli out of the back of the truck.  She was fast asleep.  She is really deaf now and didn't seem to have noticed we had stopped, so I just left her there.  There was a convenient rock to pose Jake and Luna. 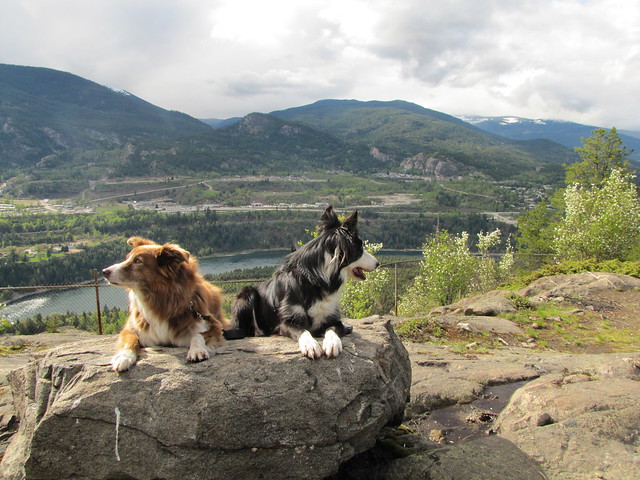 Jake, is she finished yet, this is sooooo boring. 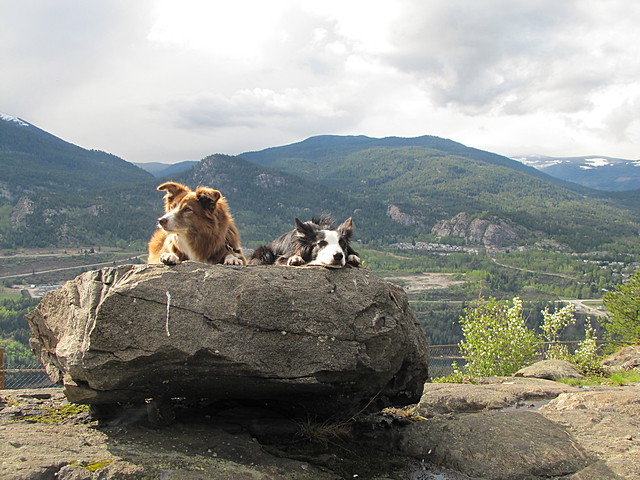 Hmm, there's someone else down there now.  They'd better stay away from our truck! 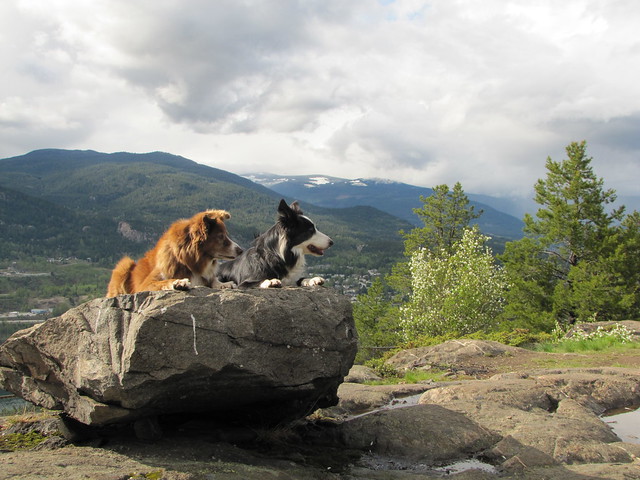 12 hours after we had started out that morning, we arrived back in Oliver.  It's a pretty time of the year to travel.  Most places, although not all, the trees were in the process of leafing out.  Everything was fresh and new and colourful and green.   The Saskatoon bushes were blooming on the hillsides.  The sun was shining in B.C.  As for that Alberta, next time we'll have to go in the summer I guess.