Since you saw a bit of this bench in the video of Smudge, it seemed like a good time to do this post.
I'm not great with the interior decorating.  I used to like our living room, but just lately...not so much.  Wasn't quite sure what I didn't like, although the furniture seemed a bit dark,  and there were a couple of things I didn't like anymore.

This cheap bench/coffee table had seen better days.  Luna (I think I can blame her) had put a couple of small rips in the vinyl.  It looked well used, it was dark and I was wanting to lighten things up a bit.  It was something bought in a box from grocery/superstore. Made in China.
I'd already started to take it apart at this point. 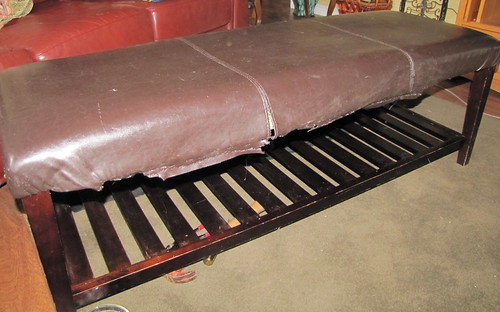 Separated the top from the bottom 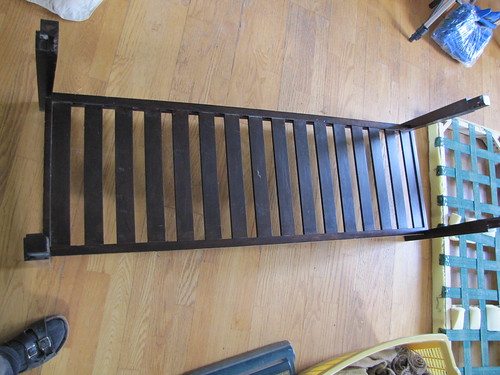 The top was pretty saggy, we discussed putting a piece of plywood on the frame instead of the webbing.  Instead we undid the webbing strips at one end and pulled them tight again.  The foam top was still in good shape. 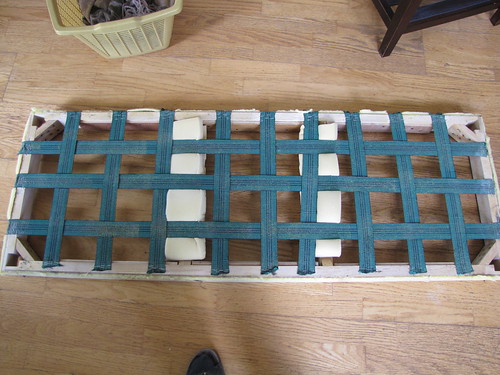 I had some upholstery fabric left over from making a slip cover for the chair that Jake was sleeping in, in the video.  There was a blanket over the slip cover in that video.  I want to change that too, I still have enough fabric bits to make a partial slipcover for the slipcover.  I want to be able to see the slip cover, not have it covered up all the time.  So if someone wants to sit in the chair, they can whip Jake's cover off, but when it's on, you can still see the fabric of the chair because it is made out of the same fabric.  Does that sort of make sense?  This bench and Jake's chair on the other side of the room are now covered in the same fabric.

Because we have our feet on the bench all the time, and Luna will sometimes jump on it (where's a good trainer when you need one?), I needed it to be washable if it wasn't wipeable like the vinyl.  I put velcro on the underside of the frame top, and velcro on the edge of the fabric.  The fabric isn't stapled on, it's held in place with velcro.  That way I can take it off and wash it if I need to.  Or replace it without having to pull out 1001 staples.

The cream coloured tray was a dark coloured one that I painted.  Then I did a wax paper transfer.  You print a picture on some wax paper or freezer paper or something similar.  I used the backing from a sheet of labels.  Because the paper has a coating on it, the ink doesn't sink in, but just sits on top.  You very carefully turn the paper and ink face down onto your surface, and then rub the edge of a credit card or something similar all over the back of your printed picture.  Since the ink couldn't soak into the paper, it transferred to the tray.  Now it didn't work perfectly.  In the large dark areas the ink tended to form big balls and I ended up with a black blob.  I did fiddle around afterwards with some paint and a black ink pen to fix things up a bit, but I still like how it came out. 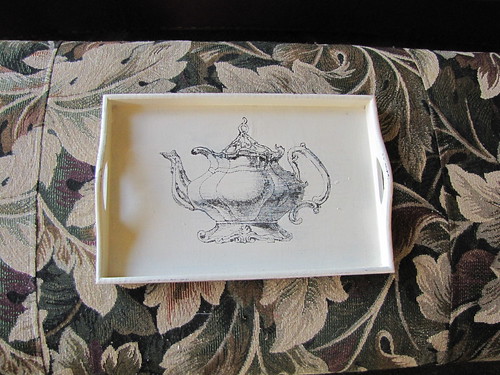 Still working on ideas for cushions (not using this one).  I have since got a couple of light coloured throws to drape over the back of the couch and loveseat.  It took a bit of getting used to, the bench in it's new look, and I wasn't sure I liked it at first, but I do now. 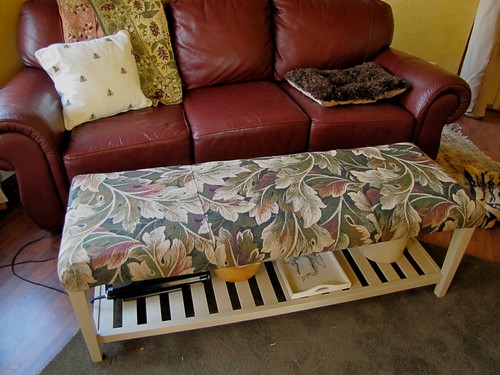