Walk with the Wildflowers

Some mornings at Oliver I will take Jake and Luna for an early walk up the mountain.  We don't go far, just up as high as the water tower, and then maybe come straight back.  Usually though once I'm up there I like to go a little farther.  This particular morning I didn't go up the gravel road to the water tower, but headed up the steep rocky trail that starts at the bottom of that road and goes up to the north, putting a steep gully between me and the water tower.  When I had been up there just before we had gone to Alberta, I hadn't taken the camera, and of course wished I had, because there were all sorts of wildflowers blooming.  I had the camera with me this time.

The mountain, which is not much more than rock and sand, has greened up a bit.  I haven't figured out what this shrub is yet, although the leaves look sort of familiar. 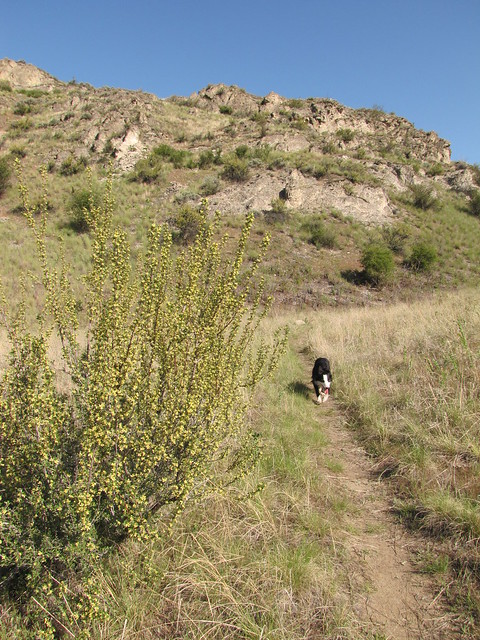 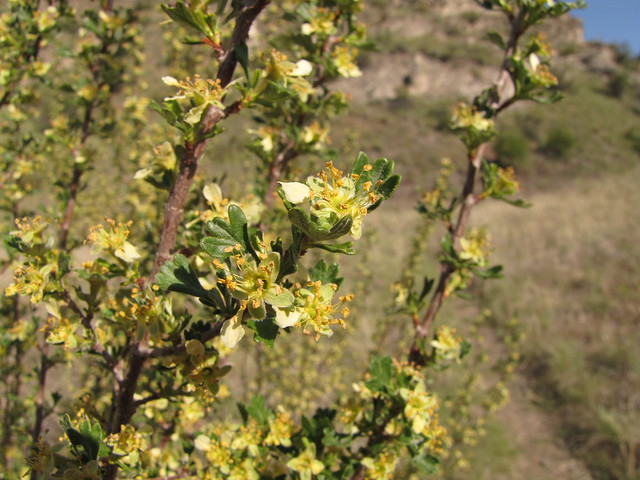 I don't think Jake is overly fond of going up there.  I think he 'knows' that things are out there to get him if he isn't careful.  He stays close and rarely steps off the trail.  Luna is a slow learner, or maybe just doesn't care, but I got tired of picking chunks of Prickly Pear cactus off her feet and legs.  She refuses to move when she gets stabbed, and it's kind of funny if she has it on two legs, because then she doesn't know which one to hold up.  Those sharp spines are wicked. 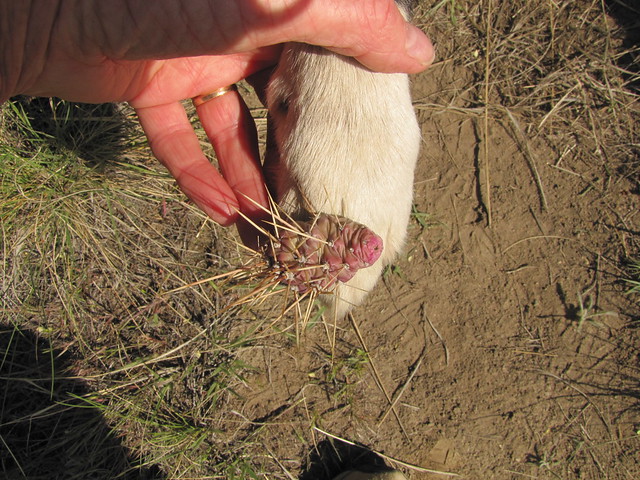 The darn stuff is hidden in the grass and grows in a big clump
. 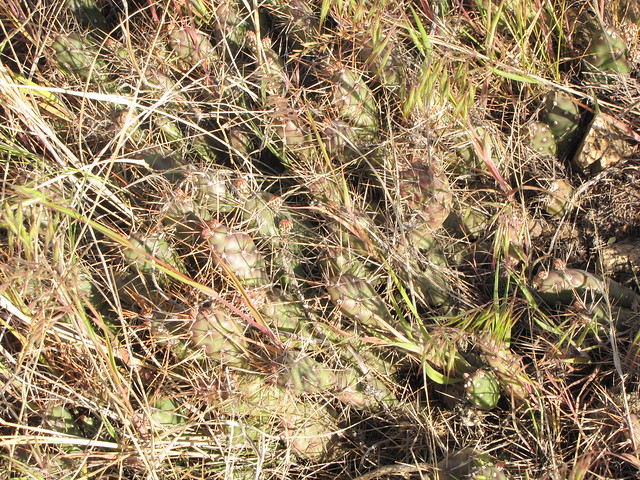 In the end I put Luna back on leash.  That seemed to keep her Prickly Pear free.  We headed up another steep trail on to the top of a rocky knoll with great views over the town. 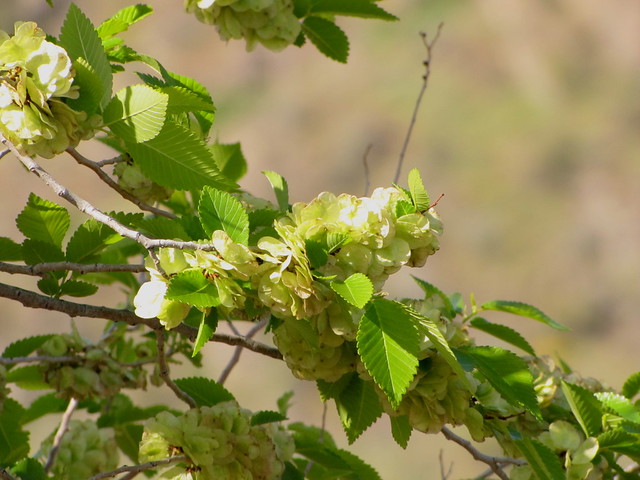 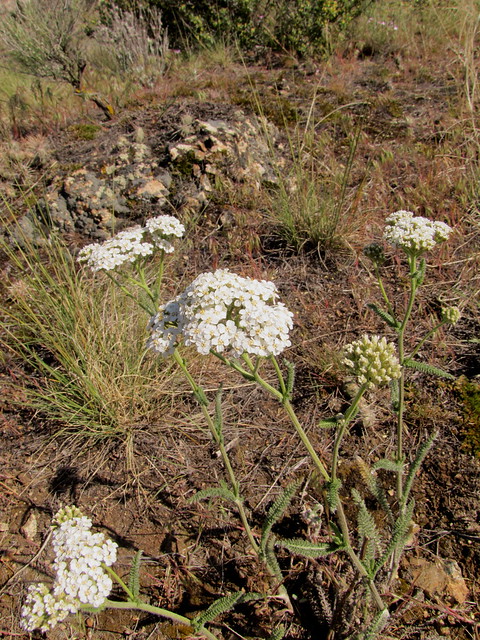 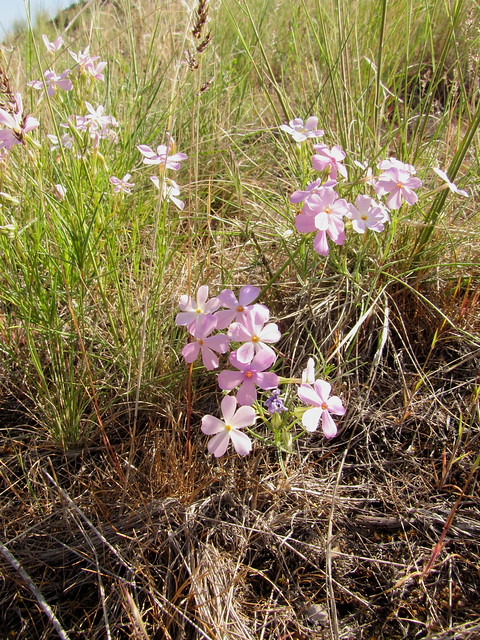 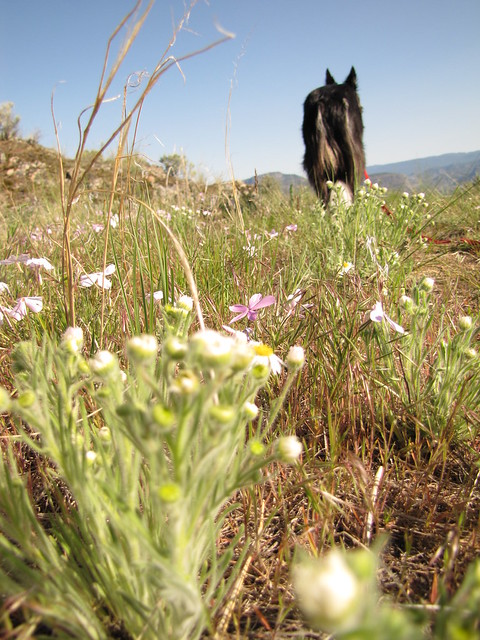 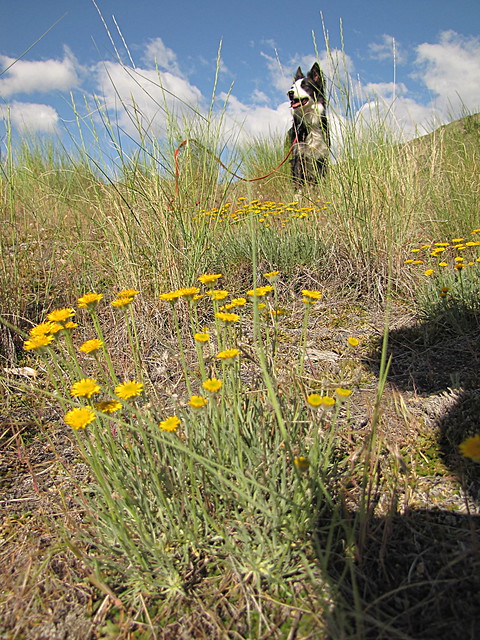 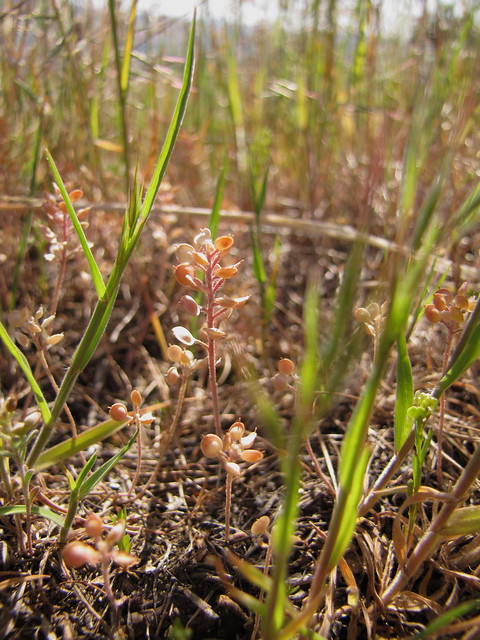 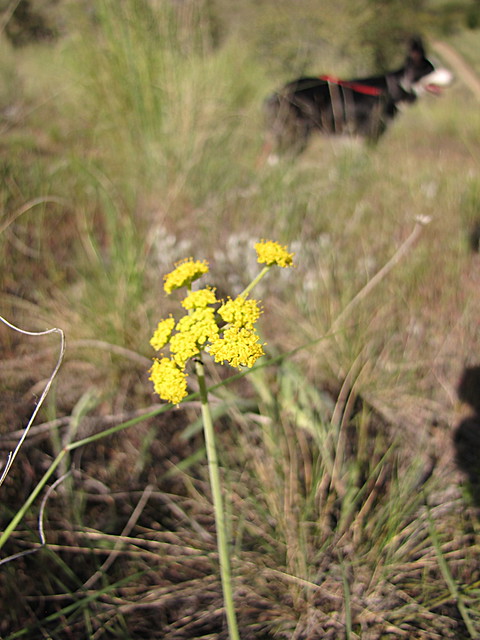 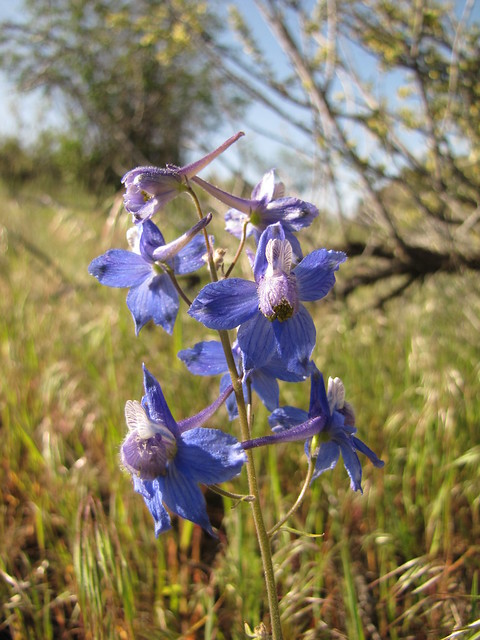 We headed back through a little valley.  If I get there early enough it is still in the shade.  Not this time though.  I love walking through there, I find it a very special place. 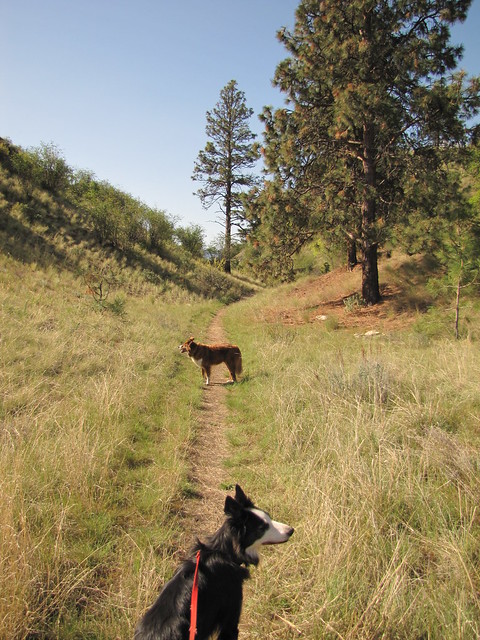 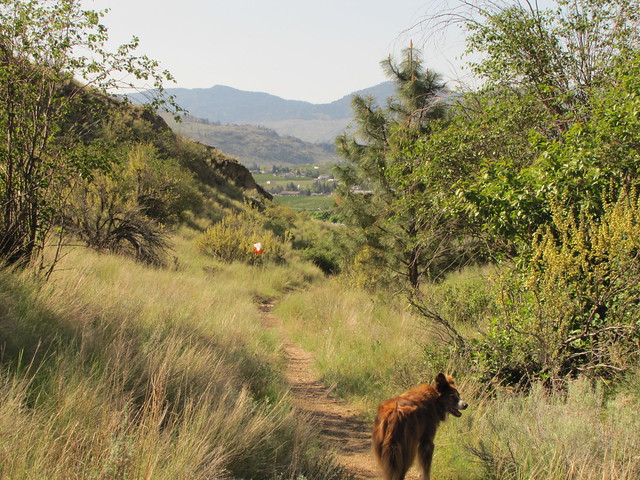 Not sure what these were.  I am assuming they were trying to attract a certain insect, but for what reason, I don't know. 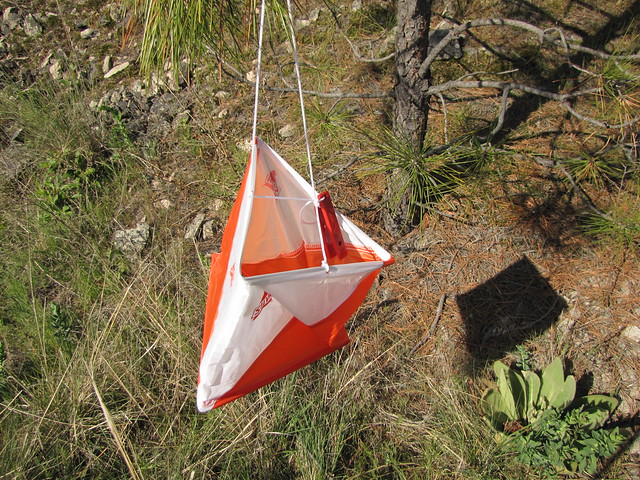 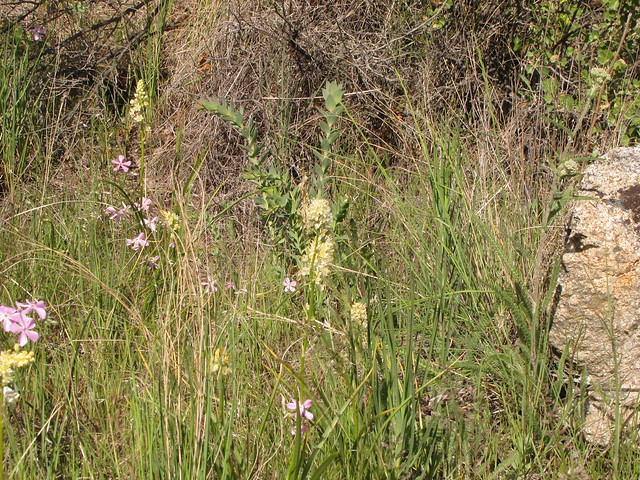 Almost back to where we started.  That's the water tower on the other side of the gully, behind Jake.   You can just barely see the radio tower between the clouds, 3/4 of the way up the edge of the mountain. 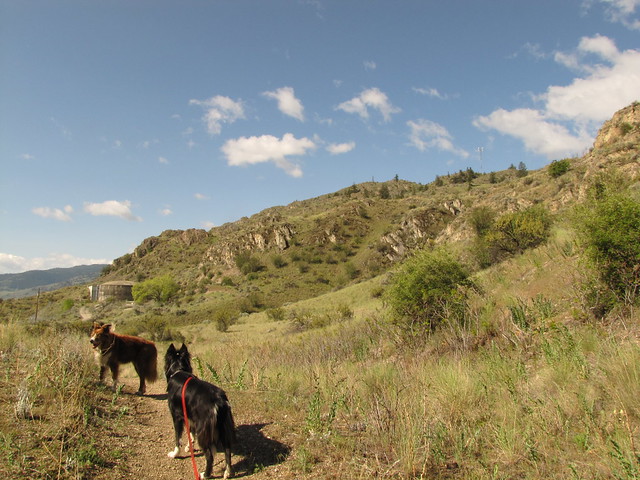 The previous trip up here, I was just a bit farther along past Jake, where the trail swings to the left just before I slithered back down the rocky trail to the road.  Suddenly out of the valley walks this tall man (at the time I was sure he was wearing robes).  He was walking with a long staff.  I immediately thought of Moses coming down off the mountain.  It was like he had appeared out of nowhere.  Luna hadn't seen him yet, but I knew if she did she would probably start barking madly at him.  A strange man, suddenly appearing out of nowhere, and carrying a big stick.....she would. not. like. that. at. all.  So I hustled her to the steep rocky trail and headed down as fast as I could, hoping I wasn't going to loose my footing and slip and fall.  I figured 'Moses' would keep on going, and cross the gully to the water tower.  I daren't look back, because I didn't want Luna to notice, but I could hear the sound of rocks behind me.  I got to the bottom and snapped the leashes on and marched off as fast as I could.  I knew 'Moses' was still coming because Jake kept stopping and looking back, I'm sure he thought it must be Larry.  Eventually I turned one way and he kept on going, and really he was just a guy, maybe wearing some sort of short tunic, with a messenger type bag over one shoulder.  Reading this now it seems kind of funny, but at the time it just seemed rather creepy.

This particular morning there was no sign of Moses.  Just more flowers. 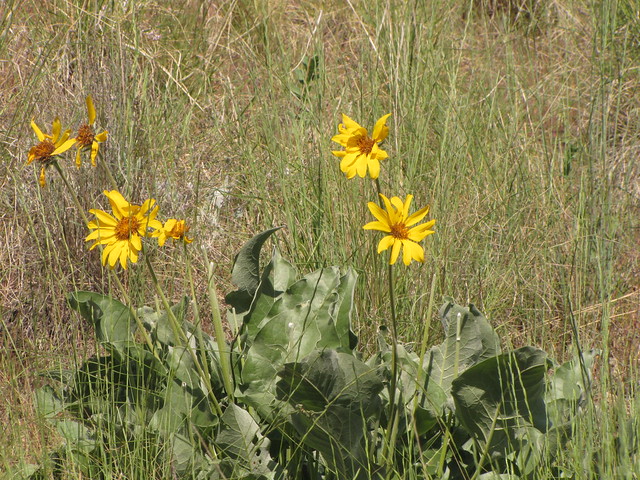 At the bottom of the road to the water tower is a long hedge of lilacs.  The smell is wonderful. 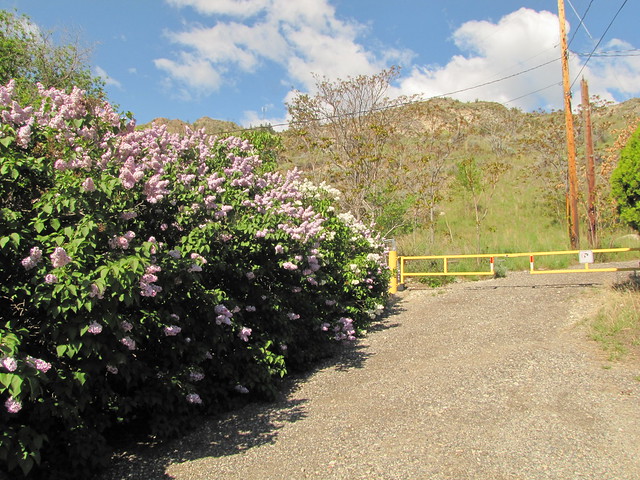 There are lilacs everywhere around Oliver.  There are some in the hedge along the property next to us.  When we arrived in the evening, as soon as I opened the truck door in the carport, that was all I could smell.  What a welcome:) 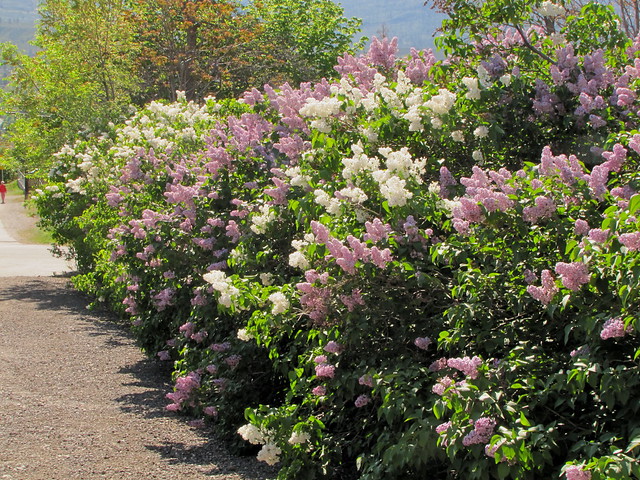